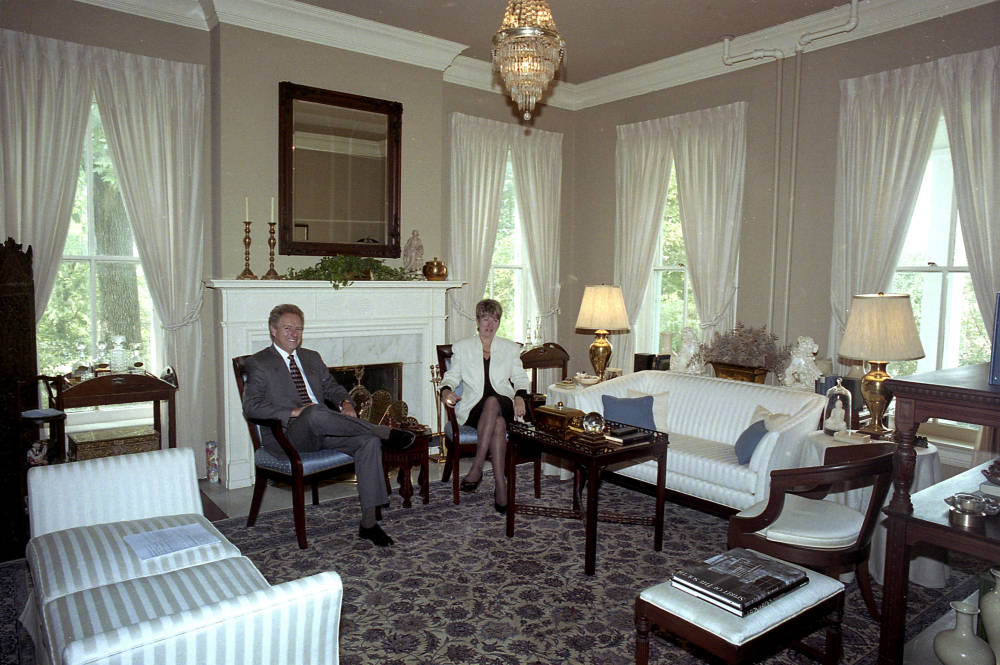 Bert and Mary Ann Kellerman relaxed in the living room of their home at 6 S. Fountain, which has been named to the National Register of Historic Places. (Fred Lynch ~ Southeast Missourian archive)

GRAND OLD HOUSE ON THE HILL EMBODIES LOVE OF ARCHITECT

Mary Ann Kellerman has made accommodations with history.
An interior designer and Southeast Missouri State University professor, she loves the modern look.
But she and her husband, Bert Kellerman, a marketing professor at Southeast, live in a 112-year-old, white-painted brick house that sits grandly atop a hill at 6 S. Fountain, just east of the Cape Girardeau City Hall.
Over the years, Mary Ann Kellerman had a desire to live in a home incorporating her flair for contemporary design.
At one time, the couple thought of selling the house, but they couldn't part with the stately structure.
On July 22, the two-story home and the Alliance building -- an 89-year-old, Spanish Street commercial building owned by the Kellermans -- were placed on the National Register of Historic Places. 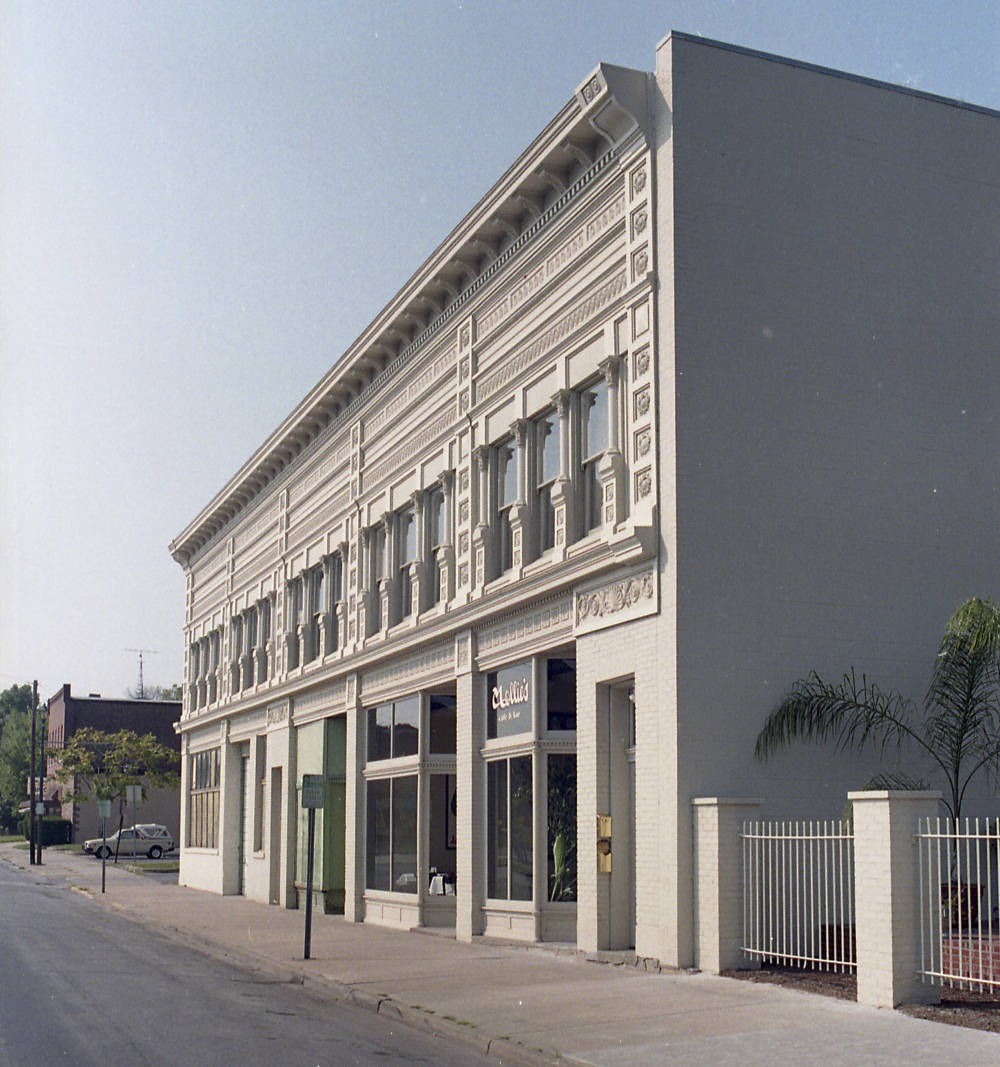 The Alliance building, which is near the corner of Spanish and Independence streets and owned by the Kellermans, is also on the National Register of Historic Places. (Fred Lynch ~ Southeast Missourian archive)

The downtown building, constructed around 1905, is the only pressed-metal front structure remaining in Cape Girardeau. It is situated a few blocks east of the Kellerman home.
Kellerman says she has come to terms with the historic house. "The house has always won the battle," she confided.
"My personality is second and the house's personality is first and that is disturbing to a designer," Kellerman said.
The couple have lived in the plaster-walled home for 22 years and have remodeled the interior three times, outfitting it with a cornucopia of antique furniture, mostly 19th century English, French and American pieces.
The original floors were pine. They were replaced with oak in the 1930s.
The stairway has an elaborate, wooden newel post with glazed-tile insets.
The Kellermans have added on too, expanding the structure on the east side. A 45-foot-long addition, which houses the kitchen, was constructed in 1982.
Mary Ann Kellerman said the home today is in the 6,000-square-foot range.
But even with the expansion, efforts have been made to complement the home's original architecture.
"We don't live in a Victorian kind of atmosphere certainly, but we try not to go against the style of the house," she said.
Mary Ann Kellerman loves modern styles, but she also delights in antique furniture. She teaches history of furniture at Southeast.
But she admits that the most ardent admirer of the home is her husband. 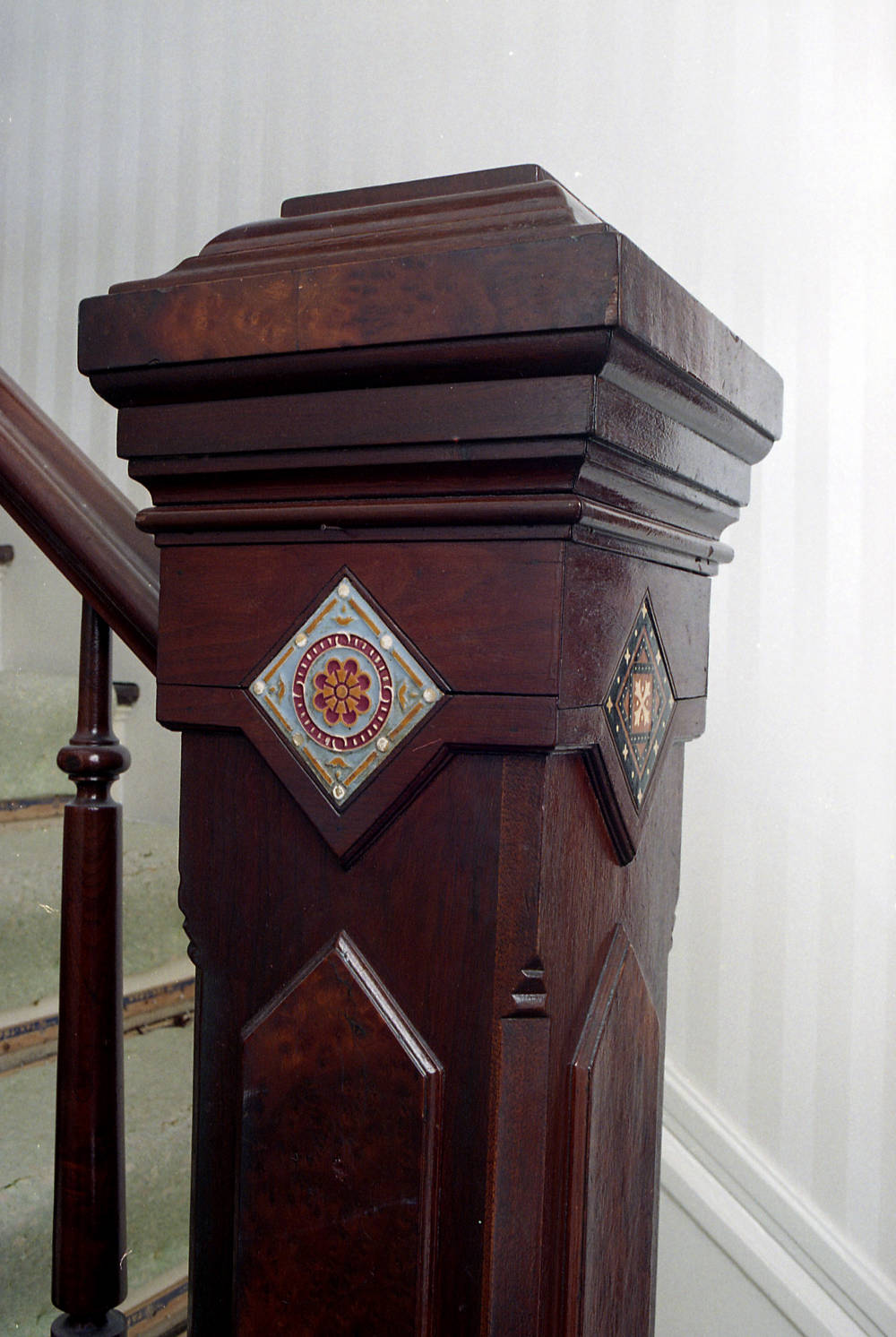 A wooden newel post with glazed-tile insets stands at the base of the stairway. (Fred Lynch ~ Southeast Missourian archive)

"My husband is the one who loves this old house," she said, casting a glance at her spouse as they sat in the cocoa-and-cream colored, antique-filled parlor, with its white moldings and high ceiling.
Bert Kellerman, who grew up on a farm in Southern Illinois, says he has always had a fondness for Southern-plantation-like homes.
"I do like the scale, the open feeling," he noted. "I like the privacy of the hill."
Mary Ann Kellerman has managed to live with the home's venerable architecture and at the same time engage in creative design. She paints on fabrics and pillows.
A carriage house on the property was expanded and transformed into an airy guest house, complete with a stylishly modern kitchen and bedroom loft.
She designed the couple's lake house at Lake of Egypt in Southern Illinois.
But home remains the stately white house on the hill.
The Kellermans bought the home in 1971, while both were attending graduate school at the University of Missouri-Columbia.
Mary Ann Kellerman noticed the Queen-Anne-style house while doing research on historic houses in Cape Girardeau.
The house was in poor shape at the time.
"We had the roof done immediately and the gutters done immediately," she recalled.
The Kellermans have lived in the house since 1972.
The house was constructed in 1882 for George Boardman Clark, who had served as state auditor from 1872 to 1874.
The structure was designed by Edwin Branch Dean, an early Cape Girardeau architect who also designed the Glenn House, which is also on the National Register.
In the 1870s, he was involved in the construction of the Malden and New Madrid Narrow Gauge Railroad. In 1877, he laid out the Dunklin County town of Malden.
After moving to Cape Girardeau in 1878, Clark went into the newspaper business, publishing the Courier.
The house was constructed the year he became first vice president of the Cape Girardeau Building and Loan Association.
The house had a succession of owners after Clark sold it in 1891.
Since the Kellermans have owned it, they have only opened it up for public tours twice.
Mary Ann Kellerman isn't one to boast about the house. But she does admit that the home is well suited for large parties involving as many as 150 people.
For the Kellermans, however, size is secondary. It is the home's solid architectural character that counts. 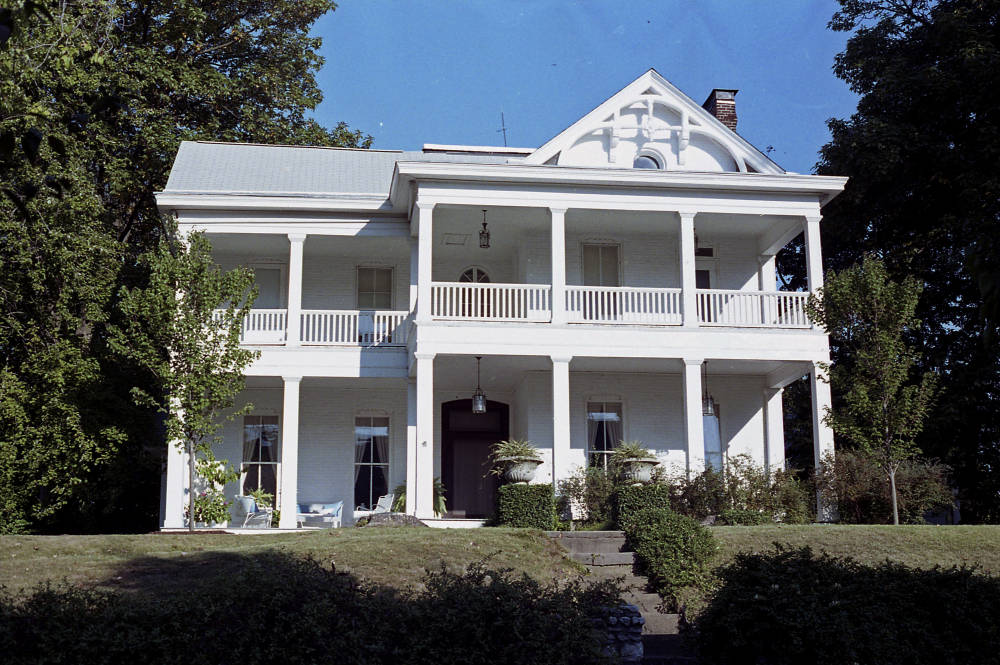 A view of the west side of the Kellerman house. (Fred Lynch ~ Southeast Missourian archive)