This week's blog contains the final story in a three-part series on the logging industry in Southeast Missouri in 1944.

While the previous articles dealt with the history of logging in the district and the effects of World War II on the industry, the final installment looked to the future timber harvesting in Southeast Missouri. 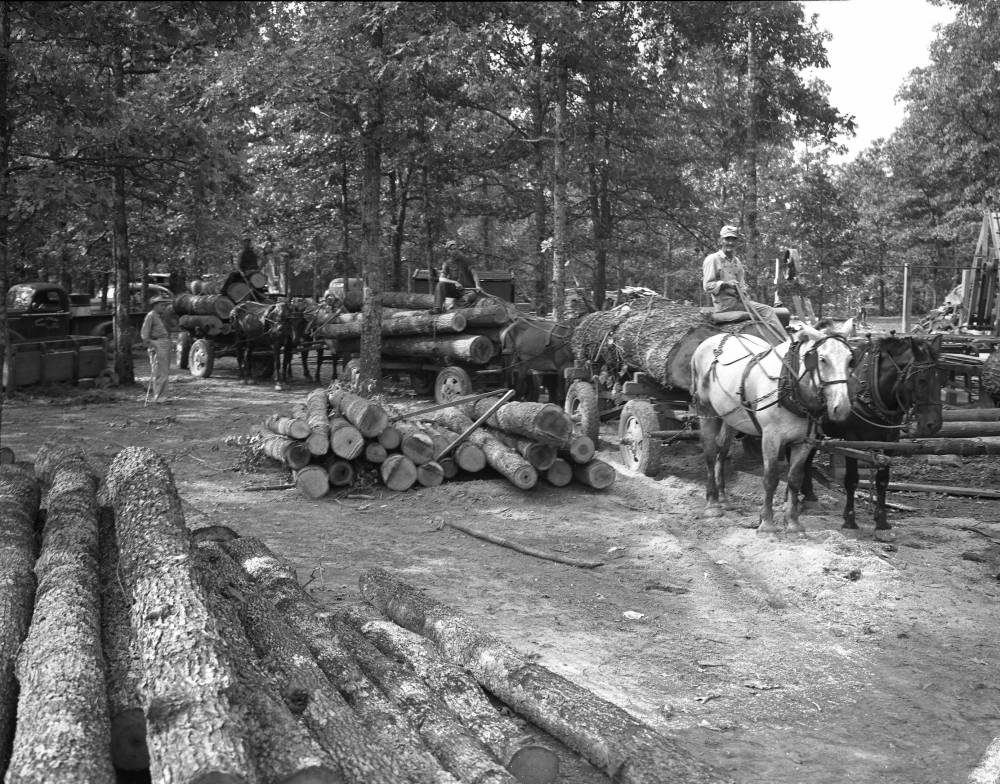 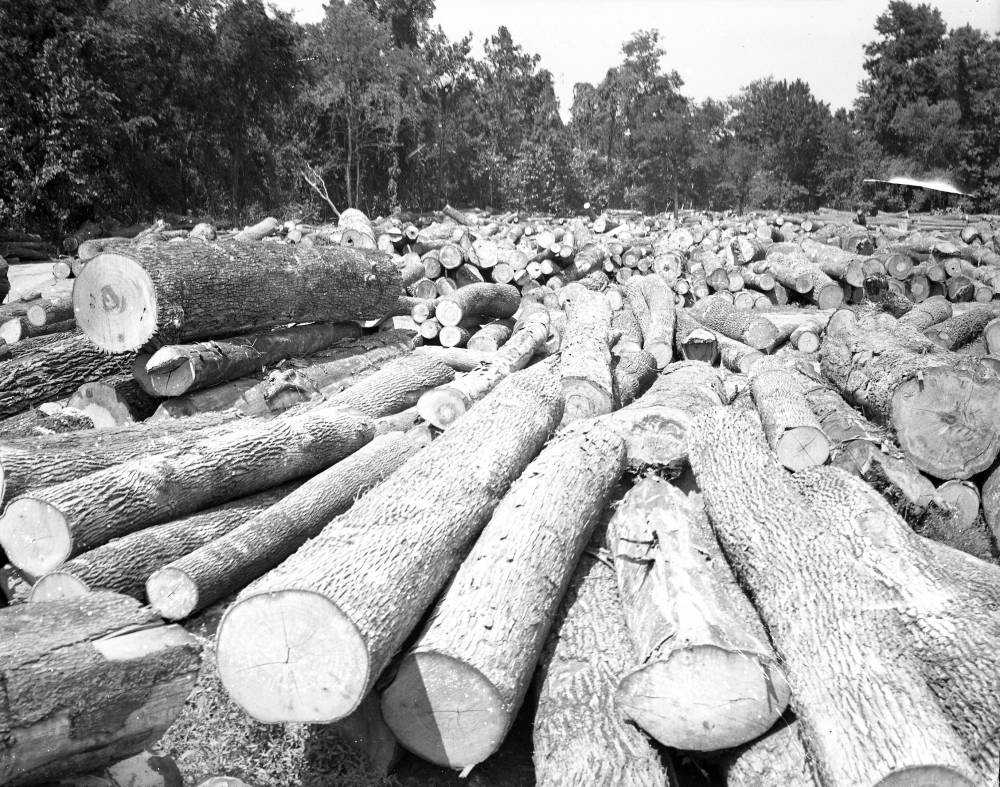 These are typical scenes at the many mills hidden away in Southeast Missouri's forests. The top photo, taken west of Dexter on the McFaw Land Co. property, shows loaded log wagons waiting to roll off their cargo on the yard at the mill. Below is shown a log yard at Dorena, containing an estimated million board feet of lumber. (G.D. Fronabarger ~ Southeast Missourian archive)

The lumber industry of Southeast Missouri poses a problem for the future, just as does the constant farming of soil. The district's forests, unless they are nurtured for future development, will fail. Continuously, for the past 50 years, lumber has been cut from the district forests which, according to the U.S. Forest Service, speaks well for the district.

Southeast Missouri is blessed with factors which make a given site ideal for a lumber stand -- good soil, abundant, well-distributed rainfall, and a long growing season, which gives the area a great capacity for timber growth.

However, certain practices, it is pointed out, are necessary to have future timber. Among these are fire protection and a program of careful selection of trees to be cut each year as they are needed. These practices are being given much attention by owners of forest land who realize that good forest practices will insure a source of permanent income. Many timber owners and farmers are beginning to protect their timber from fire and from grazing, the latter naturally destroying the tiny tree growth.

Gus James of Zalma, who owns several hundred acres of young oak and hickory timber, has stopped grazing on the tract and is practicing fire prevention. He has a caretaker in the forest who reports all fires and supervises a firefighting crew composed of local residents. He reports that he has been able to confine fires on his property to less than 40 acres annually, which, compared to the damage done annually to thousands of acres over the country is really an appreciable item. In many places no effort is made as yet to stop fires.

Mr. James also plans to cut the more mature trees this year, making room for the growth of younger trees, and to thin out the young stands which are too thick for maximum growth. He is obtaining about 300 board feet of growth per acre this year.

Another outstanding case of good forest management in the district is on the Andrew Alexander Tract on Big Island, near Commerce. Mr. Alexander has about 1,000 acres of cottonwood on land unsuited for farming. By following good cutting practices, he is able to harvest about 750,000 board feet of logs from this tract every 10 years. Fire and grazing are not serious problems in the area, but limiting the cut to older, larger trees is an essential practice. Only trees above 18 inches in diameter at the stump are being cut on this tract.

Farther south along the Mississippi River is another example of this type of forest management. A tract of about 10,000 acres of cottonwood and other Mississippi bottom land hardwoods is being managed by two men who own a sawmill, and small slack cooperage plant and a casket factory. By cutting the trees above 16 inches in diameter at the stump these men are able to keep their three plants running and, in addition, they sell about 500,000 feet of logs annually. Similar practices are being followed by a great many farmers who mark a few of the larger trees and sell them as they become decadent, realizing that their woodlot greatly increases the value of their farms. Building repair materials, fence posts and fuel wood are the most common essentials provided by the farm woodlot.

A few of the larger lumber and tie companies who own tracts of timber land are practicing forest management. The Moss Tie Co., the wood preserving division of the Koppers Co. and the Hobac Veneer & Lumber Co. of Caruthersville own timber land in Southeast Missouri and are limiting the cutting of trees to the mature specimens.

Near Dexter the McFaw Land Co. of Dexter is planning for the future of many families by laying out its huge 31,000-acre tract into smaller farms. Much of the tract is now timbered, and according to Marion T. Minton, the company's manager, the new farms will have from 10 to 20 acres of carefully selected trees. These tracts, with the proper care, would, he said, provide an ordinary family with its building repair, new farm building and fuel needs during the span of an ordinary lifetime. 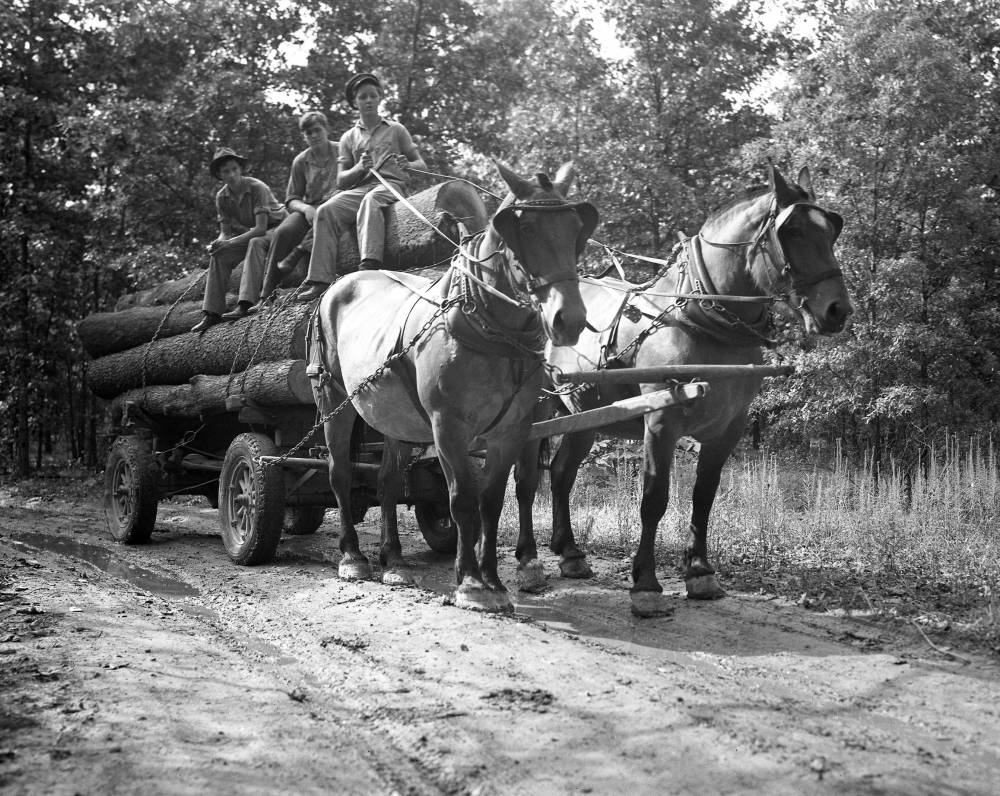