Continuing where we left off in last week's blog, we were discussing the logging industry in Southeast Missouri. This blog contains the second in the three-part series of articles published in 1944 as the war in Europe seemed to be winding down.

Fittingly, the article provides a glimpse of the wide usage of wood products in the war effort. 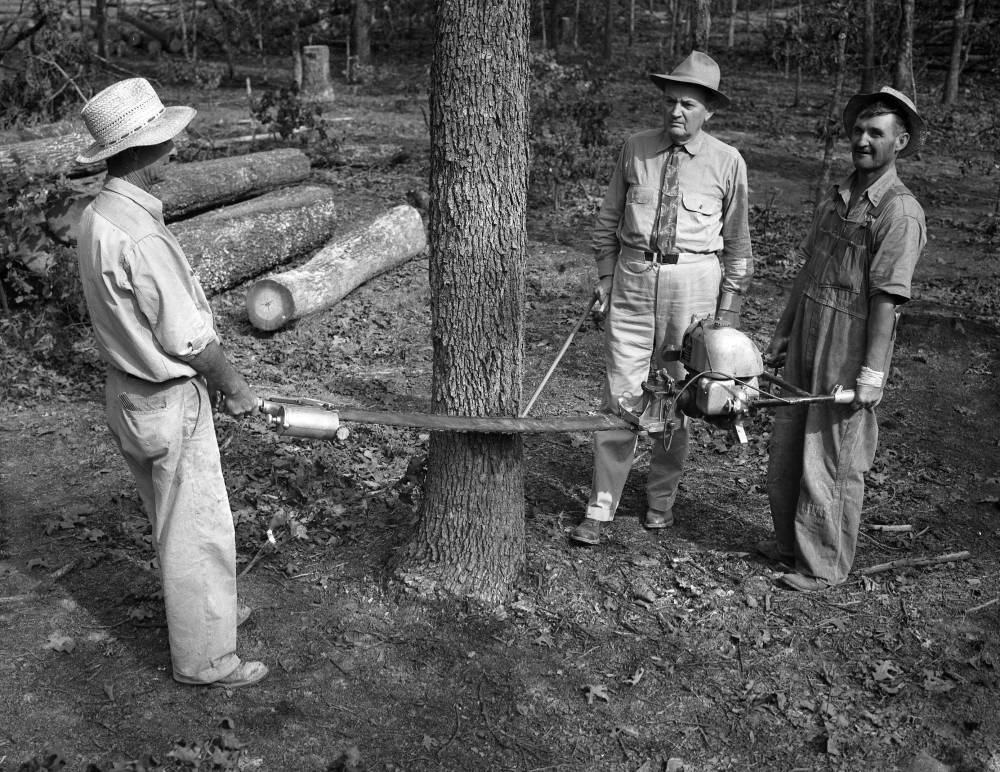 (This) photo shows how the industry is using motor power to take up the slack caused by the manpower shortage. Here is a power saw used on the McFaw Land Co. tract west of Dexter. One minute after this picture was taken the tree was down. Left to right are John Litzler, timber operations foreman, Marion T. Minton, general agent for the land company, and Ed Vaughn, a member of the sawmill crew. (G.D. Fronabarger)

LUMBER HELPS TO WIN THE WAR

District Production Is Up 20%

(This is the second of a series of three articles to appear in The Missourian prepared by a staff writer and photographer in collaboration with R.D. Lane, project forester of the U.S. Forest Service with the Timber Production War Project.)

The arm of wartime necessity has reached into Southeast Missouri's forests for wood products which have been revealed as vital to the victory effort as are many of the agricultural and mineral products. Lumber, serving a multitude of needs in the war program, is being cut in virtually every county of the district, some of it by small mills and the remainder is being taken out by big-scale operators.

Lumber production in Southeast Missouri has jumped about 20% since the war started, lumbermen say, because it is one of the most critical of materials. Although you can't build a house or large building which requires a great amount of lumber, it is being used up by the war machine in an effort to bring the day of complete victory ever nearer.

This year about 35 billion feet of lumber will be needed in the nation for the war effort, and about 17 billion feet of this will go for crating and shipping of war materials in order that they may reach the battle fronts, and some of it also going to this nation's allies. In normal times, according to the U.S. Forest Service, about one-fifth of this volume is needed for the regular civilian requirements.

Responding to the demand many new mills have sprung up in Southeast Missouri and older mills have stepped up their production. In spite of manpower and equipment shortages and other difficulties the industry has shown the production increase. This has been achieved by using heavier and more modern equipment and many tracts which have been considered inaccessible are now being logged. Th use of rail and river transportation has come into prominence, conserving gasoline, tires and trucks. Forest roads have been built and older roads improved to speed up truck transportation and save tire wear. More horses and mules are now being used to move logs and primary forest materials to points more accessible to trucks. Many mills, in order to maintain a production increase, are working 60 hours per week.

Probably the most common of all forest products in Southeast Missouri is the railroad tie. Since railroads have had to absorb the major part of the increase in wartime transportation, the demand for ties has tremendously increased. In normal times the railroad tie has worn out because of natural deterioration and at present under the great strain of shipping the ties wear out before natural deterioration sets in. The destruction of rail lines during the invasion has necessitated shipping hundreds of thousands of ties abroad to put these lines back into operation and make them serve our victory-bound armies.

Southeast Missouri's mills have produced lumber for deck construction and maintenance, landing barges, merchant ships, army cots, tent pins and poles, defense plants and housing, and for laying the Big Inch pipeline, and for crating such items as food, munitions and medicines. Quite some time ago wood was substituted for steel in the construction of Army cargo bodies, this program calling for 35,000 feet of high-grade hardwood lumber per hour, 24 hours per day. Many district mills were sending a large part of their high-grade hardwood production to the plants for this use.

The part played by the smaller mill is not without its importance. Lumber is being produced by them for farm maintenance and for maintenance of county roads and highways. About one-third of all the lumber manufactured in the nation is used on the farms. This is particularly true in this district where there is now a large amount of repair work going on and where new farms are taking over on acreages only recently in forest growth.

Our district forests have produced many specialty items. Hickory handles are made for entrenching picks and shovels, for striking tools on railroads and for tools at foundries and shipyards. Many of the handles for tools that are standard equipment on jeeps are made in this district. Many of the walnut gun stocks used on our hand weapons are made from district lumber, and ash logs grown here find their way into agricultural implement stock. Red gum, white oak and polar logs grown in most of the district find their way to the aircraft plants, and also are used in making the plywood for housing units shipped overseas.

Cypress, the wood eternal, is not without its use. Much of it goes into the making of caskets, for boxboard and some of it is used, normally in peacetime, for interior finishing.

Among the largest operators in Southeast Missouri at present are the Shannon Bros. Lumber Co. of Memphis, Tennessee, the Hobac Veneer & Lumber Co. at Caruthersville, the Gideon-Anderson Co. of Gideon and New Madrid and the M.E. Leming and Garver Lumber companies of Cape Girardeau. In Missouri Shannon operates only as a logging firm. Just now this firm is cutting the remaining virgin timber of the great Three States tract in Mississippi County. Giant trees are being felled, some of them producing logs four to five feet in diameter and commonly logs of two to three feet in diameter. The logs are taken to the Mississippi River and shipped by barge to their mill in Memphis. 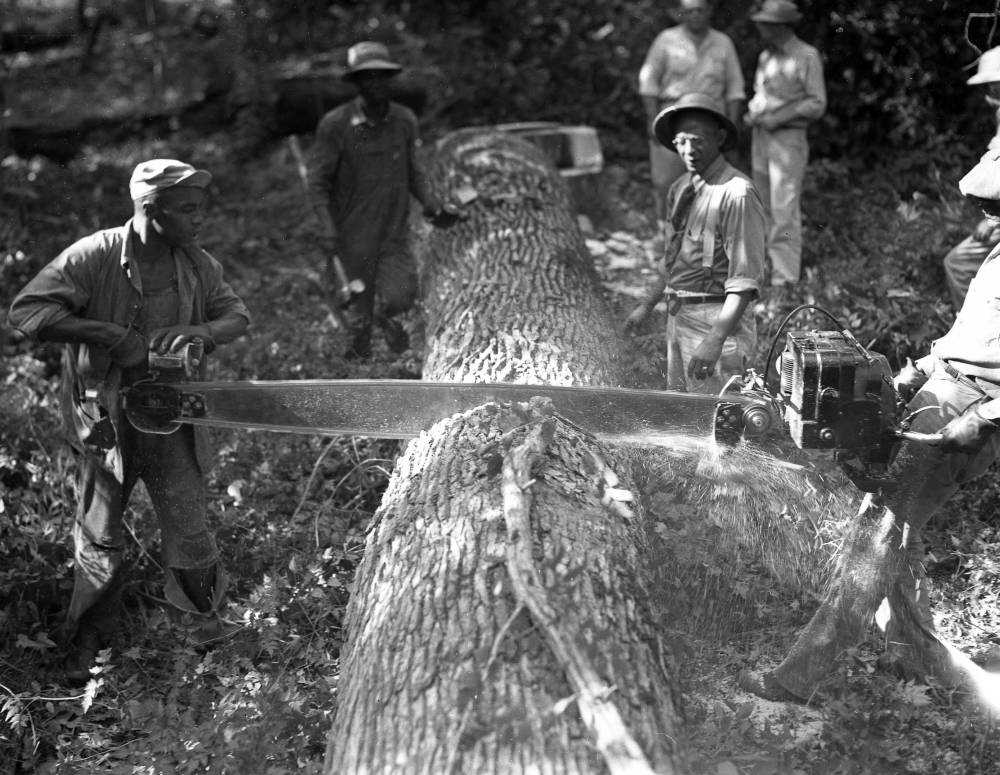