Several years after G.D. "Frony" Fronabarger retired (for the last time) in 1986, he showed up at the Missourian library with several boxes filled with 4-by-5 negatives. A treasure he was gifting the Missourian.

Most of the negatives were unlabeled and undated. And Frony didn't have the patience to go through them and help identify them. He had started on a new chapter in his life, and looking at old, dusty negatives wasn't a part of it.

And so began a journey for me and for now-retired photographer Fred Lynch, as we examined each scanned image for clues to help ID them. Even though we've come a long way since 1986, there are still hundreds of images that remain mysteries.

But I can claim a small victory. As of August 2019, 14 more images have been at least partially identified, ironically, thanks to Frony. On Aug. 30-31 and Sept. 1, 1944, Frony wrote a three-part series on the logging industry in Southeast Missouri. Several of the photos that accompanied the articles were among those that had defied our best efforts, until now.

And so, reproduced in this blog, and over the next two weeks, are those illustrated articles. Not all of the negatives for those pictures published were saved, and not all the photos Frony took were published in 1944. But the best of what has survived I'll reproduce in these blogs. 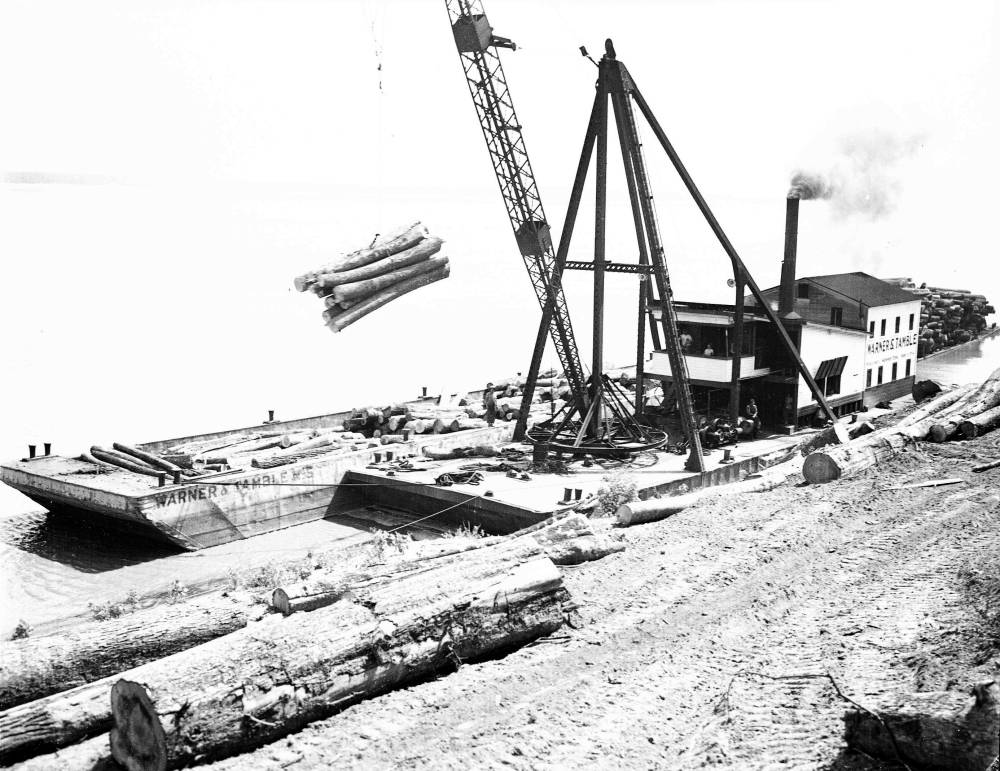 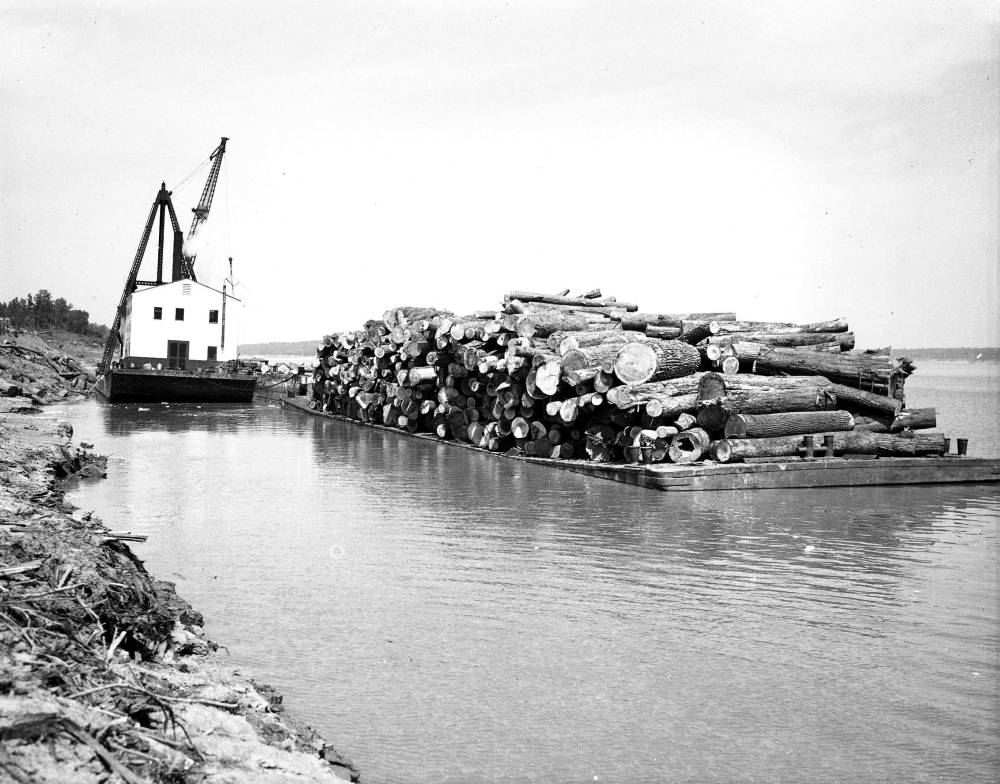 How extensive the lumber industry remains in Southeast Missouri is shown in the above photographs. The top photo, taken near Dorena, Mississippi County, shows the Shannon Bros. Lumber Co., loading logs onto barges for shipment to the firm's Memphis plant. An entire truck load of logs is being swung to a barge. The (other) photo shows a barge load of lumber, about 150,000 board feet, cut from the Three States timber tract in Mississippi County. There are between 900 and 1,000 logs on this barge, weighing around two million pounds. (G.D. Fronabarger ~ Southeast Missourian archive)

(This is the first of a series of three articles to appear in The Missourian prepared by a staff writer and photographer in collaboration with R.D. Lane, project forester of the U.S. Forest Service with the Timber Production War Project. Others will follow.)

A half century ago most of Southeast Missouri was covered by a dense forest, much of which had never felt the bite of an axe or saw and, surprising, enough of that forest and of the new which has grown up since, remains to still make the lumber industry one of the largest in the district industrial picture.

Fifty or more years ago about 75% of the district's area was covered with merchantable timber. Naturally, the lumber industry developed out of various needs -- the demand for more agricultural land which necessitated the clearing of large areas, and the demand for the product itself. And, today, after hundreds of millions of board feet have been cut from the land, there still remains in the isolated southern end of Mississippi County a part of a virgin forest.

But, the development of the lumber industry brought with it another development. It fostered the construction of railroads, these roads built to make the vast timber areas accessible and to move the product to market, or get the logs out of the forests to mills where they could be turned into civilian usage.

The first railroad was completed in Southeast Missouri in 1880. Known as the Cape Girardeau and Southwestern, it ran from Cape Girardeau to Puxico, bringing from the Mingo swamp area and adjacent tracts a great amount of lumber which was loaded onto boats and shipped up the Mississippi River to St. Louis and also sent by way of Cairo, Illinois, and up the Ohio River to eastern markets.

This line was extended to Grandin in 1888 to provide an outlet for the large stands of pine in that area. The line connected with the Current River branch of the Kansas City & Fort Scott Railroad.

In 1903 the Frisco Railroad purchased the line and extended it to St. Louis in 1904. Many of the rail lines have been in operation since the early days but, for the most part, the rail lines and lumber mills have disappeared along with the gradual decline of timber resources. These rail lines and the timber industry were responsible in a large measure for making available the large farming area of the district.

T.J. Moss, founder of the T.J. Moss Tie Co., began buying timber and railroad ties in 1885, moving the product along the Cape Girardeau & Southwestern lines. In 1895, William Deering moved his mill to Deering to produce agricultural stock for what is now the McC0rmick-Deering Co. William Brown invested the first power-operated stave mill and set it up at Brownwood. This was the beginning of the Pioneer Cooperage Co.

During this period of development Cape Girardeau was the center of trade for the railroads and the lumber industry. Prior to the development of the railroads many small mills were operated in or near Cape Girardeau for the purpose of supplying local building demands. Upon completion of the transportation system large mills were set up near this city, some of which are still in operation.

In 1894, M.E. Leming purchased a mill from T.M. Hoskins and set it up at the present mills site here of the Leming Lumber Co. The firm is this year observing its 50th anniversary of operation on the same location and is managed by M.E. Leming Jr. The Garver Lumber Co. moved to Cape Girardeau in 1904 and still is in operation, being one of the two band mills in operation in the district.

Probably the oldest lumber producing company in Southeast Missouri is the Loos Bros. mill at Jackson. The original firm began operating a sawmill in the vicinity of Jackson in the early 1880s, and two of the sons of the original Loos brothers are now operating the mill at Jackson.

Some of the other companies originally settling in the district which still are in operation are the LaPierre-Sawyer Handle Co. at Jackson, the Himmelberger-Harrison Lumber Co., which has its plant at Morehouse and its main office here; the Gideon-Anderson Co. at Gideon and New Madrid, the IXL Handle Manufacturing Co. at Dexter and the Dillman Industries, now known as the Hobar Veneer & Lumber Co. at Caruthersville.

The lumber industry, if a thorough survey was made, probably would rank second to farming in the district. About 20% of the total cash farm income in Cape County is derived from the sale of forest products, according to the U.S. Forest Service.

Approximately 600 men are employed in the lumber industry in Cape County. The payroll in the county, the cost of raw materials and the operating cost of the industry amounts roughly to around $1,000,000 annually in this county.

The forests of Southeast Missouri have made a very important contribution to the development of the district and the industries which now depend upon the forests for raw materials are an important part of the economy of this section of the state. 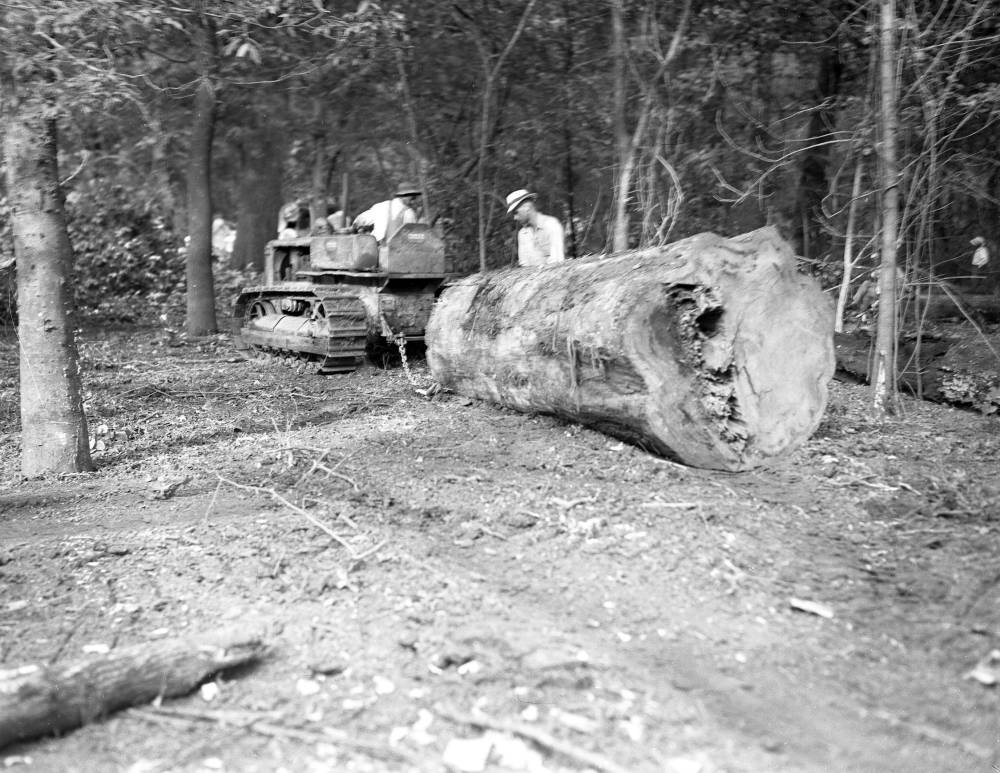