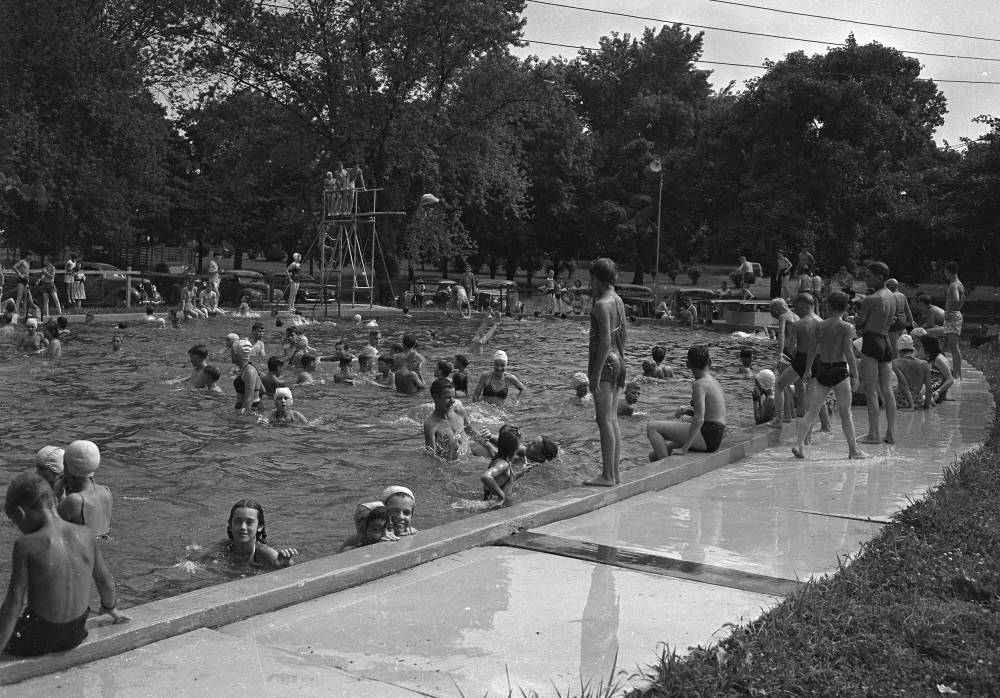 Some years ago, Fred Lynch did a blog about the opening of the new Cape Girardeau Municipal Swimming Pool in Fairground (now Capaha) Park in 1919. He reproduced the article published in the Southeast Missourian the day after the opening.

The article is filled with details about how Mayor H.H. Haas ordered the new pool open for the Fourth of July, even though it wasn't completely finished, and how some children couldn't wait for the mayor to give the go-ahead and jumped into the pool prematurely.

It sounds as if it was a good time for all. All, that is, except for the African-Americans of Cape Girardeau. In 1919, and for many years after, Cape Girardeau was a segregated town in some ways. And the history of Cape Girardeau's first municipal swimming pool is a good illustration of that despicable practice.

In none of the articles I have read concerning the opening of the pool was it stated that blacks could not swim there. It was an unwritten rule. Black and white didn't mix. And the newspaper didn't comment on the "whites only" municipal policy.

That is, not until 10 days after the opening. It was then revealed by the Missourian that black residents had asked to use the city pool, but got no real response from the city fathers.

NEGROES WANT USE OF SWIMMING POOL

Four representatives of the Negroes, O.O. Nance (principal of Lincoln School, Cape Girardeau's black school), Dr. W.H. Lawrie (a Cape Girardeau physician and surgeon, who was backing a plan at that time to build a motion picture theater for blacks here) and two Negro preachers (unnamed, but likely the pastors of Second Baptist and St. James A.M.E. churches) appeared before the members of the city council this morning and asked that they be allowed to participate in the use of the swimming pool.

The matter was not decided at the meeting. Mayor H.H. Haas and Commissioner Louis Wittmor did not give their opinions on the matter at this time and would give no report of the meeting.

Commissioner R.W. Frissell stated after the meeting that he had told the Negroes that he would favor them having one day at the pool. He made the statement to a report that he would offer no objection to giving the Negroes the use of the pool on the last day (of the week) because he had been informed by competent authority that they are legally entitled to the same, but would prefer that a separate pool for this specific use be constructed on s0me other city park property.

After the meeting the Mayor said that he had suggested to the Negroes that next spring an attempt could be made to build them a swimming pool by private conscription and that the park fund could be used to help build the pool. He said that he would head the donations with $100. He stated that he recognizes the fact that from a legal standpoint they can secure the use of the pool but does not believe that they will insist on exercising that right at this time and that in due time everything will be arranged satisfactory to everyone.

As noted above, the matter wasn't settled at that meeting. And judging from the lack of follow-up articles in the Missourian, the issue was allowed to slumber. The only additional mention of the request was in early August 1919. It probably wouldn't have been mentioned then, except that it was included in a Missourian editorial that dealt with issues surrounding the use of Fairground Park.

On Aug. 4, 1919, the African-American community of Cape Girardeau held a picnic at the park in honor of Emancipation Day. The picnic included a barbecue; baseball games between the Cape Girardeau Stars and the New Madrid, Missouri, Giants; races and contests. The ordinary picnic fare. In addition there were five speakers: O.O. Nance, who spoke on "Vocational Education In Our Schools, a Reconstruction Necessity"; D'Nean Stafford, a member of the school board, "The Negro as a Citizen"; Mayor Haas, "The Negro in Skilled Labor"; J.M. Batchman, "The Negro Woman in Labor and Politics"; and H.H. Harris, a black orator of St. Louis.

The following day's editorial remarks on the use of the park by three different groups at the same time: Methodists, who held a big religious meeting in the park; the African-Americans celebrating Emancipation Day, and a large (white) crowd at the swimming pool. The article warns it might be prudent to develop a plan for the use of the park, "in order to avert a clash between the races." It also mentions the earlier, unanswered appeal for use of the pool by blacks.

Fairground Park was a busy place Sunday and from a few little things that happened city officials can well afford to keep a close watch on it. The Methodists had a big meeting in the park from early morning until late afternoon and the old floral hall was used for the services.

A very large crowd was at the swimming pool all day. The colored folks had a ball game and used the amphitheater (grandstand). The three different crowds evidently enjoyed the park greatly and while there was no trouble reported it is said that some of the colored boys complained vigorously because a quantity of soda pop was missing from a lot of supplies that had been left in floral hall from a Saturday night dance.

In order to avert a clash between the races, it might be well for the mayor and the two commissioners to adopt a definite program for use of the park and then maintain it. At present there seems to be a difference of official opinion and confusion is likely to result.

Later on a committee of colored men called on the mayor and Commissioner Wittmor to ask regarding the use of the municipal swimming pool. While the matter was being discussed in the mayor's office, it is said that Commissioner Frissell stated he would vote to permit the Negroes to use the swimming pool certain days of the week.

It is said that Mayor Haas and Commissioner Wittmor have been favorable to letting the Negroes use the park for ball games and picnics when other events were not interfered with and that both are strongly opposed to letting them use the swimming pool at any time. At the same time, according to statements made both by the other officials and leading colored men, Commissioner Frissell objected to the colored people holding picnics on the grounds, but was favorable to them using the swimming pool on certain days.

Such reports, whether correct or not, are in general circulation and naturally they cause confusion. Some of the colored people under the circumstances feel that they are entitled to use the park freely, while many white people feel that the safest and best policy is for the city officials to draw the lines sharply and thus avoid possible conflict.

Too much care cannot be exercised by the officials. So far the park has been managed most satisfactorily and the mayor and the two commissioners can add to their good work by keeping a tight hold on the reins.

Apparently the issue of the use of the pool disappeared abruptly. A little more than a month after the pool opened, it was shut down by R.W. Frissell, superintendent of the Department of Public Safety, because of a report that the water in the pool was "impure and unhealthful." (It should be noted, there was no water filtration system at the facility.) Subsequent testing by Southeast Missouri State College professor H.L. Roberts showed that the city's water supply was NOT tainted. However, it appears the pool was only reopened briefly during fair week. In 1920 it opened Memorial Day weekend, but news articles don't mention blacks using the pool.

Years ago, I heard several older Cape Girardeau residents, both black and white, reminisce about conditions in the city when they were young, specifically about racial matters. While one white woman remembered blacks being able to use the municipal pool, a black woman's memory was more detailed. She explained that African-Americans were allowed to enjoy the cooling waters of the city pool one day a week, the day before the pool was drained and scrubbed and filled with fresh, clean water.

According to Missourian articles, that change didn't occur until 33 years after the pool first opened: "J.W. McBride, commissioner of parks, said today the Rev. Lawrence Parker and the Rev. George F. Bell had agreed to accept in behalf of the Negro population of the city a proposal that colored people have use of the swimming pool at Capaha Park one day a week... Under the agreement the colored children will have use of the pool for the first time tomorrow." (Published in the Missourian July 1, 1952.)

Real integration of the Cape Girardeau Municipal Swimming Pool didn't begin until the summer of 1955, the same year the city opened its new pool at Capaha Park.