In last week's blog, I discussed how speaking the German language over the Farmers Mutual Telephone Company's line in Pocahontas caused a huge spat. It seems that in 1919 some subscribers who used German to communicate over the telephone line, knowing it was against the company's rules, were punished for the infractions. They lost their telephone privileges.

I think the situation came to a head, however, when that "No German" rule was unequally applied to subscribers. In the end, lawyers were hired and the State Public Service Commission held hearings to decide the issue. The two sides eventually came to an understanding and harmony in Pocahontas was restored.

While searching for any more mentions of the 1919 spat, I learned that Farmers Mutual went on to serve the communities of Pocahontas, Altenburg, Farrar, New Wells and Frohna until 1962, when it was purchased by Southwestern Bell Telephone Company. 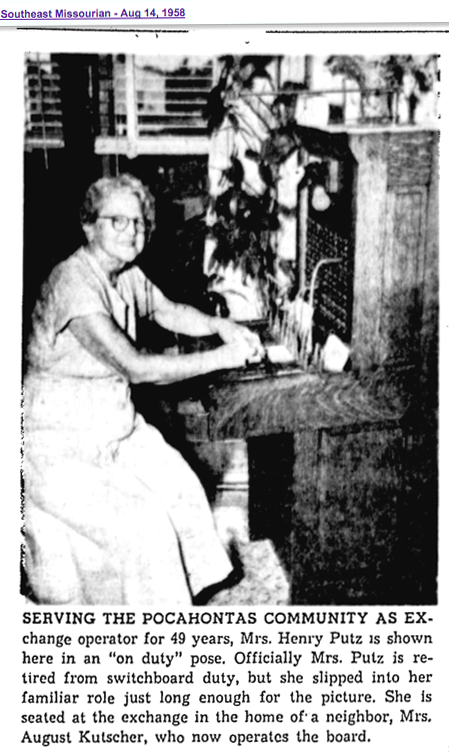 Owned and operated by the people it serve3s, Farmers Mutual Telephone Co. has survived a half century as an independent system, and today is the last existing privately owned telephone system in Cape Girardeau County.

Serving five towns -- Altenburg, Pocahontas, New Wells, Frohna and Farrar -- the company apparently pleases those it serves. Residents in these five communities expressed their satisfaction with service the way it is when they met with Bell company representatives two years ago. At that time they decided to retain their present system, voting against dial conversion which was attracting other mutual companies throughout the county.

Telephone consumers in this farm area also enjoy the low rates of their company, paying less than $1 a month for telephone service.

How the Mutual system came to be is a story that can be told today by Mrs. Henry Putz of Pocahontas who retired last year as operator of the Pocahontas exchange after 49 years of service. Mrs. Putz recalled that her late husband and her brother, Rudolph Ruehling, ordered telephones from a magazine advertisement in 1908, at $5 a phone. It was a novelty for the two men as they set about putting up lines between their homes, a mile and a half apart. And it was a novelty, also, to their neighbors who soon wanted telephones in their homes.

Those early Chicago type phones began making their way into homes in the Pocahontas community. Mr. Putz placed an order for a dozen telephones, and his largest order at one time was 22 phones.

Farmers and townspeople helped each other to set up poles and lines. White oak saplings from nearby woods were utilized as poles. Many farmers still maintain their own country lines, but in Pocahontas residents now hire this work done.

When the first Putz-Ruehling line went up, a long distance Bell phone was in use at the D.C. Thompson general store in Pocahontas. Every day Charles Boutin from Cape Girardeau, (who) pioneered in telephone service in Cape Girardeau and Cape County, would make a phone call to Mr. Thompson to give the daily livestock and produce market quotations, and Mr. Thompson would relay the news to farmers.

Now in her eighties, Mrs. Putz is finding it impossible to live without an exchange board in her house -- though it is a different sort of living. "I do miss the work, and I can't sleep good yet," Mrs. Putz said with a smile, recalling many past interruptions she experienced in her half century as exchange operator. At one time the community had 200 phones in operation, she said.

In most cases the country switchboard opens at 6 a.m. (5 a.m. in summer) and closes at 9 p.m., except for emergency calls. On Sundays the operator is off duty during hours of worship to allow her to attend church. This rule went in while Mrs. Putz was working the board. She explained that after three or four Sundays of missing services, she decided to try and get tine off for church.

An exchange operator's job is not a small one. Her hours are often filled with calls. One day Mrs. Putz tried to keep tab on calls coming over her board, but by noon (when she had 400 calls, 50 of them long distance), she just quit counting. In the early years Mrs. Putz received $6 a month compensation for her duties. Upon retirement her pay had increased to $100 a month. Showing their gratitude to their long-time operator, the company granted Mrs. Putz free phone service when she gave up the job last year. Mrs. August Kutscher now operates the exchange at Pocah0ntas. Operating the exchanges in the other towns are: New Wells, Mrs. Alfred Schuppan; Altenburg, Arthur Pilz; Frohna, Mrs. Leslie Burroughs; Farrar, Mrs. Herman Klaus.

Published April 27, 1972, in the Southeast Missourian:

The Southwestern Bell Telephone Co. and five mutual telephone systems have signed agreements for the purchase of the small system which serves communities in northern Cape and southern Perry counties, the district supervisor of the Southwestern Co., Leonard J. Rehg, announced today.

The transactions are subject to the approval of the Public Service Commission and the Federal Communications Commission. Applications before those bodies are expected to be filed later.

The communities involved are Pocahontas, Altenburg, New Wells, Frohna, Farrar, Brazeau and Wittenberg, which would be served by two new dial exchanges under the new ownership.

Despite the similarity of names, Mr. Rehg said the systems are basically independent of each other.

A mutual system is one in which the customers own the telephone property.

Each employs an operator who would be replaced by the new dial equipment.

Not until the electronic equipment is installed will the changeover become effective, and this is expected to take place within 18 months after the necessary regulatory agency approval.

Mr. Rehg said the five systems now serve 830 customers but with the new equipment a potential of about 1,600 customers is believed to exist in that area.

One dial exchange would serve New Wells and Pocahontas and the other would be for the other communities.