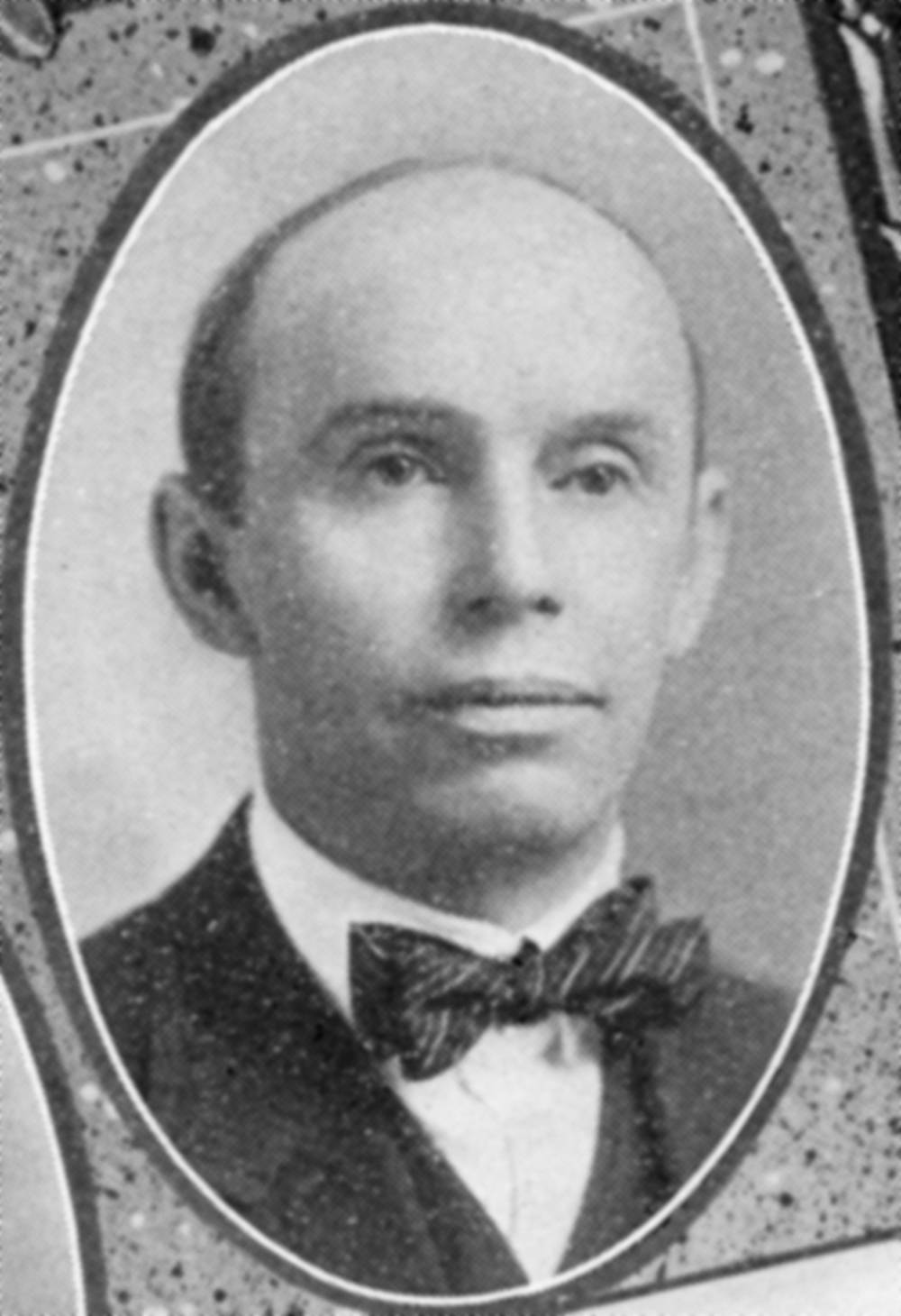 Major Giboney Houck was the only son of prominent Cape Girardeans Louis and Mary Hunter Giboney Houck. An attorney by training, it appears Houck spent the majority of his time working for the business interests of his family.

But Giboney did take two breaks from helping to run the family enterprises. The first was as a volunteer with the U.S. Army during the Spanish-American War. He was mustered in to Company E, 6th Regiment Missouri Volunteer Infantry, at Jefferson Barracks on July 20, 1898, as a first lieutenant according to the Soldiers' Records: War of 1812 - World War I database found on the Missouri Secretary of State's website. That database also indicates 21-year-old Giboney mustered out on May 19, 1899, in Savannah, Georgia, following service in Cuba. His rank at that time was captain.

Giboney's second break from his legal career was in 1918, when he was elected to the Missouri House of Representatives for Cape Girardeau County. He defeated Republican George F. "Fritz" Siemers by just 32 votes. He was the only Democrat to win election in Cape Girardeau County. Giboney served only one term in the Legislature, during which he helped usher a measure through the House designed to alleviate counties' monetary responsibilities for the construction of bridges over canals dug by the Little River Drainage District.

While Giboney Houck's tenure in the House is probably best known for the drainage issue, I'll always remember him as the man who voted against women's right to vote.

While the women's suffrage movement had been around nationally and statewide for many years, the first reference I can find to a local campaign was in September 1918, just a month before Giboney was elected to the House. That and subsequent articles note that Southeast Missouri hadn't been the target of the suffragists' efforts, but that changed immediately after the November election. Both state and national leaders were sent to the area, including Marie Ames, the national organizer of the Woman's Suffrage League. She made her headquarters in Cape Girardeau, working tirelessly for "the ratification of the Susan B. Anthony federal amendment." In early December, she helped form a county organization of workers, the initial meeting being held at the elegant home of Virginia Hunter Houck on College Hill. Virginia was the wife of Louis B. Houck, first cousin of Giboney Houck.

Giboney was dead-set against women voting. He made his stance clear in this June 21, 1919, article published in the Southeast Missourian.

TELLS MISSOURIAN HE WILL VOTE AGAINST MISSOURI ADOPTING AMENDMENT.

Major Giboney Houck, who will be present at the special session of the Missouri Legislature called to adopt the federal woman suffrage... (Constitutional amendment), told The Missourian that he will vote against the measure. He says letters from suffrage headquarters indicate that the vote will be nearly unanimous for the measure, but he doubts this. He says the House may be strong for the amendment, but there may be trouble in getting it through the Senate.

Major Houck says he is opposed to the amendment for two reasons. First, he believes the great majority of women of Cape County are opposed to it because it will soon take from women all the special rights in state and federal laws they have enjoyed as the "weaker sex."

He says he opposed the law passed by the last Legislature which takes from women the protection of the statute of limitation. For instance, a married woman who might inherit property and who should fail to protect her title to it could at any time during her wedded life lay claim to the property, or her children would be entitled to claim it until they had attained their legal age. This law gives no protection to a man or to a single woman setting a certain period in which acion must be taken.

Major Houck says this law was amended to do away with the special rights for a married woman and minor children upon the argument that now that women are recognized as the equal of men in business affairs, they must stand on the same basis. He says that it was very noticeable that lawyers and legislators from the large cities favored the new law while most all rural members opposed it. It was adopted by a very small margin.

This is only the opening wedge to place women on a commercial basis with men, Major Houck argues, and so all women will be deprived of the protection they have long had in order to enable a few women to vote and take part in politics.

Another thing, the Major says that makes him oppose the suffrage amendment, is that it brings two great reforms at one time. He says the effects of national prohibition should be taken care of before another upheaval comes.

Major Houck told The Missourian that he would prepare a statement outlining his position in this matter so it can be published soon.

Early the next month, as Giboney prepared to leave for Jefferson City, he spoke again to a representative of the newspaper.

Published July 2, 1919, in the Southeast Missourian:

MAJOR HOUCK WILL VOTE AGAINST SUFS.

Major Giboney Houck left yesterday morning for Jefferson City to attend the special session of the legislature called to ratify the national suffrage amendment. He told The Missourian that he would speak and vote against its ratification on the ground that it will take away more protection from the women than it will give them. He said he had heard that a St. Louis member of the Legislature would also oppose ratification but that he knew of no others.

He said he believes he will represent the wishes of the great majority of women in Cape County by opposing suffrage. The Missourian recently published an interview giving his views on the subject and he says that he figured he would hear from local suffragists. To his surprise not a woman appealed to him to support suffrage, he says. He knows of many women who are opposed to it, he says, and therefore he believes the women of Cape County are overwhelmingly opposed.

The special session meets today and will be in session about a week. It would take not less than three days to pass a bill, even by unanimous consent, and it is probable that many legislators will want to make political hay by exhorting on the subject.

The following day, the Missourian carried a banner headline that topped all seven columns of the front page:

MISSOURI WOMEN GIVEN FRANCHISE BY LEGISLATURE

CAPE COUNTY MAN ONE OF FOUR TO VOTE AGAINST WOMAN SUFFRAGE

JEFFERSON CITY -- Missouri has ratified the Federal woman suffrage amendment, the Senate by a vote of 28 to 3, having adopted the House resolution, shortly before noon, Missouri being the 11th state to ratify.

JEFFERSON CITY -- The Senate was delayed in reaching a vote on the suffrage amendment by the death of Senator Wix of Bates County, having adjourned until today in respect to his memory.

JEFFERSON CITY -- Missouri today ratified the federal suffrage amendment when the Senate concurring in the action of the House yesterday passed the adopting resolution by a vote of 28 to 3.

The three opposed to the adoption of the resolution were cast by Senators Brogan and Kinney, Democrats of St. Louis, and Senator Cook, Democrat of Cole County.

Only a small demonstration followed the affirmative vote by the senate. The celebration planned by the state suffragists which was to have been held tonight, has been canceled on account of the death of Dr. Anna Howard Shaw (a leader in the woman's suffrage movement. - Sharon). It took only five minutes for the Senate to adopt the ratifying resolution at 10:30 o'clock after it had been called up by Senator McKnight of Gentry County.

JEFFERSON CITY -- Two Southeast Missourians, a Republican of Perry County and a Democrat of Cape Girardeau County, were among the quartet who refused to sanction the franchise for women.

The House ratified the federal woman suffrage amendment by a vote of 125 to 4, passing the resolution without any oratory.

The representatives who voted against suffrage were Giboney Houck of Cape Girardeau and Thomas Shepard of Jackson County, Democrats, and George J. Mecker of Perry County and Milton Moss of Jefferson County, Republicans. The entire St. Louis delegation voted for suffrage.

The suffragists' reaction to Houck's vote was published in the Missourian a couple weeks later.

"It was equally enlightening to hear the 'nays' of Representative Moss of Jefferson County, Houck of Cape Girardeau, Shepherd of Kansas City, and Mecker of Perry County, pronounced in scarcely audible tones. One almost forgave them."

Following Tennessee's approval of the Susan B. Anthony constitutional amendment Aug. 18, 1920, Cape Girardeau County women voted for the first time on Nov. 1, 1920. The Missourian reported the "county registered nearly twice as many votes for Harding and Cox (in the presidential election) as it did for Wilson and Hughes four years ago."