The military service of Gene Ellis

Some time following the death of his mother in 1935, Gene and his father moved to Bollinger County, Missouri. By 1940, they can be found on the federal census living in Whitewater, along with Kerry’s second wife, Della May.

Three years later, while residing in Cape Girardeau, young Ellis decided he had waited long enough to serve his country in its fight against the Axis powers. Claiming to be 18, Ellis filed for the draft in Cape Girardeau County on July 14, 1943. He was actually only 14 years old.

The Department of Veterans Affairs BIRLS (Beneficiary Identification Records Locator Subsystem) Death File shows that Gene enlisted in the Navy on Aug. 5, 1943, and was released from military service April 28, 1944.

The young sailor's eight months of service earned him a spot on the front page of the Southeast Missourian, when his patriotic deception became known. That article gives details of his brief naval career. 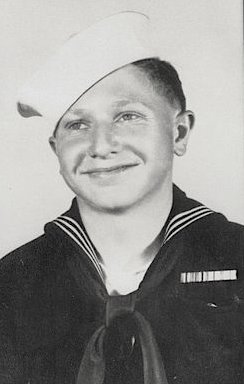 Published in the Southeast Missourian May 5, 1944:

NAVY DROPS BOY BECAUSE OF AGE

Sedgewickville Youth Entered at Age of 14.

Although just turned 15, C. Gene Ellis of Sedgewickville is a veteran of six months of service in the Navy, from which he has just been discharged because of his tender years.

The young sailor, a fireman second class, was in Cape Girardeau Thursday when it became known that he had joined up again -- this time with the Lloyd Dale Clippard Post, Veterans of Foreign Wars, thereby becoming the youngest member of the local post. He celebrated his 15th birthday March 31.

He went into service when 14, on Sept. 5, 1943, and was discharged April 28, at San Francisco because Uncle Sam got wise he was not old enough under the rules to carry on. Physically he was doing the job in uniform, but the rules say a man shall be 17 years old, and at that age, shall not go into combat duty.

The Ellis lad, a son of K.W. Ellis of the Sedgewickville community, stretched things somewhat with respect to his age to get in. Now he is a veteran, having seen six months of service in the combat areas of the Pacific. Gene, thoroughly Navy, would not talk about the ship, type of ship or sort of service he saw in the far Pacific during the months he was a fireman out there for Uncle Sam's Navy. He went as a slip of a youth at 115 pounds and now weighs 145 pounds.

The red thatched chap appeared at Jackson a year ago and registered for military service, informing the authorities he had arrived a this 18th birthday. He was accepted at Jefferson Barracks, being assigned to the Navy.

After a time it leaked out some place that Sailor Ellis had departed from home too young, and the Navy, to avoid future complications, decided to discharge him.

He said while here Thursday that he has not decided on whether he will make a stab at getting back in fighting harness as soon as he is old enough, but admits he hated to leave the Navy. He proposes to secure a job, and to get back to high school this fall.

Gene is to attend the meeting of Lloyd Dale Clippard Post May 12 to meet some of the members, many of them three times as old.

Not only did young Ellis join the V.F.W. in May 1944, the following month he also signed up for membership in the American Legion.

JACKSON -- In a ceremony conducted by Commander J.R. Henderson, 20 veterans of World War II were initiated into the American Legion Tuesday night. Among the new members was Gene Ellis of Sedgewickville, 15 years of age. He is said to be the youngest member of the American Legion in Missouri, probably in the entire country.

Approximately 70 Legionnaires were present and in the audience were also a few members of the American War Dads chapter and other visitors. A report on membership showed that the post no has 374 members, including the 20 added at this meeting. The post passed a resolution instructing its delegates to the state convention to vote for True Taylor of Cape Girardeau for the position of senior vice commander. It was also reported that the post had sent 60,000 cigarettes to the boys in the service overseas.

Gene Ellis' Find-a-Grave memorial indicates he later enlisted in the Army, but I have been unable to find supporting documents for that statement. However, I did track down a second draft registration card (bottom card below) for him, this time from May 12, 1945, while he was living in Lovelock, Nevada. Perhaps concerned the war would end before he could legally serve in the military, Ellis once more lied about his age on the registration card, claiming a birth date of May 12, 1927, and age 18. In a different colored ink, that date is marked out, and Ellis' real birth date, March 31, 1929, is written in. 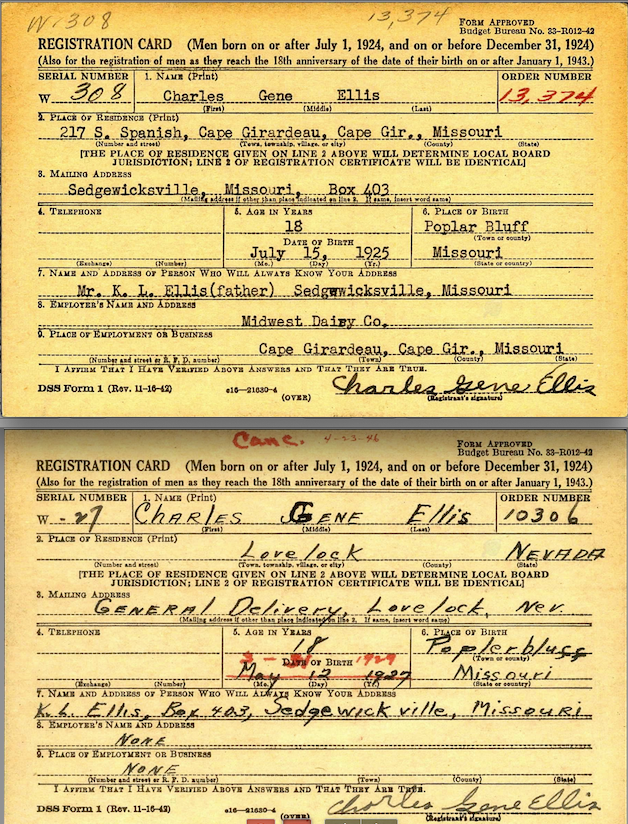 Charles Gene Ellis later moved to Texas and worked as an advertising salesman. He passed away on May 12, 1980, in Nueces County, Texas.