History of the Nancy Hunter Chapter of the DAR

As I pulled together the various elements of this blog in May, I anxiously awaited word of my application to join the Daughters of the Revolution. Big Sis and I filed our applications and supporting documents back in March, and we have just received our official notification of membership.

She and I have join such notable Cape Girardeau women as Mary Hunter Houck, Amy Husband Kimmel, Marie Watkins Oliver and Allene Wilson Groves as members of the Nancy Hunter Chapter. Our applications were based on the military service of Churchill Hooper, our fourth great-grandfather, who served in the 5th South Carolina Regiment, enlisting on June 11, 1776.

The Nancy Hunter Chapter of the DAR is 118 years old, having been founded in February 1901. Newspaper accounts from that time aren't readily available, but I did manage to locate a couple of Missourian articles that tells the early history of the Nancy Hunter branch.

This first story was written just 24 years after the chapter was organized.

Published Sept. 11, 1925, in the "New Building Edition" of the Southeast Missourian:

DAR PERPETUATES MEMORY OF WHOSE WHO SERVED NATION

"To perpetuate the memory and spirit of the men and women who achieved American independence" is the first object of the Nancy Hunter Chapter of the Daughters of the American Revolution, which has been an active organization since it was founded Feb. 12, 1901.

The local chapter, which has a membership of 74, was named after Nancy Hunter, a patriotic pioneer woman of Southeast Missouri whose father was a soldier in the Revolution. First efforts to organize it were made by Miss Mary Fee, then a teacher of history at the Normal School and prominent in the school system of the Philippine Islands. As organizing agent, she went to St. Louis and asked that Mrs. Louis Houck be appointed regent. Mrs. Houck declined at that time, but in the summer of 1897, while examining "Americana," in the library at Madison, Wisconsin, she found valuable material about the Hunters who served with George Rogers Clark, and upon reaching home set about to organize the chapter.

The chapter now has 74 members, 34 of whom are non-resident, and new members are being admitted at almost every meeting. It has given to the state organization several officials, among them being Mrs. R.L. Oliver, state treasurer, and Mrs. R.B. Oliver, state vice-regent and later state regent. Mrs. Oliver also holds the distinction of being the designer of the Missouri state flag. Mrs. J.S. Kochtitzky was state chairman of the Old Trail committee.

Nancy Hunter Chapter made substantial contributions to (World War I) war relief and the Red Cross. It helps at times in enterprises of the national society. In the summer of 1924 it purchased a large American flag and a Missouri flag of the same size, and hung them in the Carnegie public library here. In October of the same year a bronze tablet in honor of the Revolutionary soldiers buried in Cape Girardeau County was placed in the federal building near the entrance to the post office. (After that Federal Building was razed in 1967 and a new structure built on the same Broadway site, the marker was installed in the lobby of the new building. Finally, the tablet was transferred to the present, Rush Hudson Limbaugh U.S. Courthouse in 2012. - Sharon) 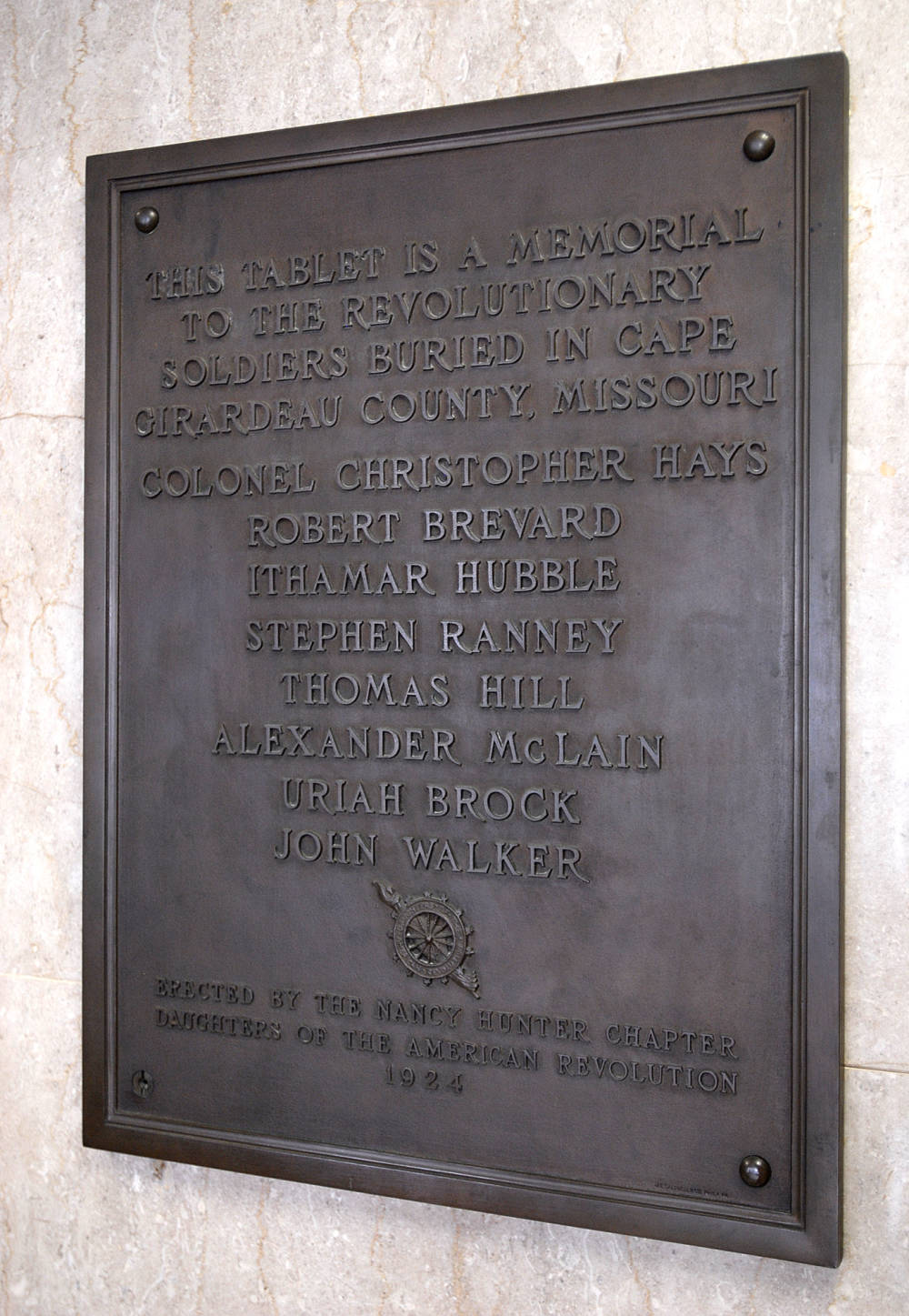 Mrs. Eliza Smith Stringer, a "real daughter" whose father fought in the Revolution, was a member of Nancy Hunter Chapter. In the near future her grave at Elvins, Missouri, will be suitably marked by the chapter.

Objects of the society are:

1. "To perpetuate the memory and spirit of the men and women who achieved American independence."

2. "To carry out the injunction of Washington in his farewell address to the American people: 'To promote as an object of primary importance institutions for the general diffusion of knowledge.'"

3. "To cherish, maintain and extend the institution of American freedom, to foster true patriotism and love of country and to aid in securing for mankind all the blessings of liberty."

On the occasion of Nancy Hunter Chapter's golden anniversary, the Missourian covered the organization's celebration.

Time turned back to yesteryear as, with buttons and bows and furbelows; small beflowered bonnets and large, plumed picture hats that costumed milady, the early 20th Century was recalled by the Nancy Hunter Chapter, Daughters of the American Revolution, and many invited guests who observed the Fiftieth Anniversary of the chapter on Friday evening. A dinner event, the celebration was held in Memorial Hall at State College and was attended by some 102 guests and DAR members.

Gaiety prevailed, even to the well-known barber shop quartet, and the table settings appropriately marked the beginning of the chapter in 1901.

On the speakers' table the central decorative note was a three-tiered birthday cake and at either end of the long feast board, tapers of three-branched silver candelabra burned, while smaller cakes, which were served with the dessert course by a chapter member, were held on old-fashioned crystal cake stands centering 13 small tables. Tall white tapers also lighted each of these tables decorated with ribbons of greenery to conform to looped arrangements which were caught into a gold-toned wreath along the front of the speakers' table at which were seated Mrs. Arnold Roth, regent who presided; Mrs. Frederic A. Groves, regent of the State DAR; Mrs. S.P. Siebert, chaplain of Nancy Hunter Chapter who offered the invocation and later presented Mrs. Groves, speaker of the evening; Mrs. E.L. Bahn, Mrs. C.A. Vandivort, Mrs. Glen Hope; Mrs. A.S. Duckworth, Mrs. R.L. Beckman, state corresponding secretary; Mrs. W.E. Walker and Miss E. Pearl Phillips. All, with the exception of Mrs. Groves, have served as regents of the chapter.

Miss Hattie Eicholtz, chairman, Correct Use of the Flag, led the group in the Pledge of Allegiance, and Mrs. James A. Waller, state music chairman, was at the piano for the National Anthem sung in unison.

Mrs. Roth extended greetings and introduced, in remarks apropos, the past regents and to her welcome, Mrs. Glen Hope gave the response, reminiscing back to the years 1919-1925, her regent years. Music at the Turn of the Century was sung dramatically by the Barber Shop Boys in their barber jackets and improvised mustaches.

They included Arthur Folsom Jr., who, with all the pathos of voice and much gesturing, rendered the well-known, "After the Ball" melody; Arnold Roth, Oscar Duncan and W.P. Caruthers. They later were aided by H.B. Newman, Bob Sapper and V.E. Smart in group singing of songs of 50 years ago.

In the course of her address, Mrs. Groves related briefly the lineage of each charter member of the chapter named for Nancy Hunter of Carlisle, Pennsylvania, daughter of Joseph Hunter of Virginia, who joined the expedition of Gen. George Rogers Clark in 1779. It was remarked that a past regent, Mrs. W.E. Walker, is in the line of direct descendants of Nancy Hunter.

Mrs. Groves, stating the founding date of the Nancy Hunter Chapter as Feb. 12, 1901, elaborated the many and varied undertakings of DAR, and what it stand for. She detailed its many educational projects, the part it plays in the preservation of things historical and dwelt at length on its patriotic and national defense programs. She expressed he viewpoint that a good DAR member cannot but be a good American, and concluded her address by stressing that we citizens of this great land, show our gratitude by being good Americans.