Girardeans joined the nation in prayer 75 years ago 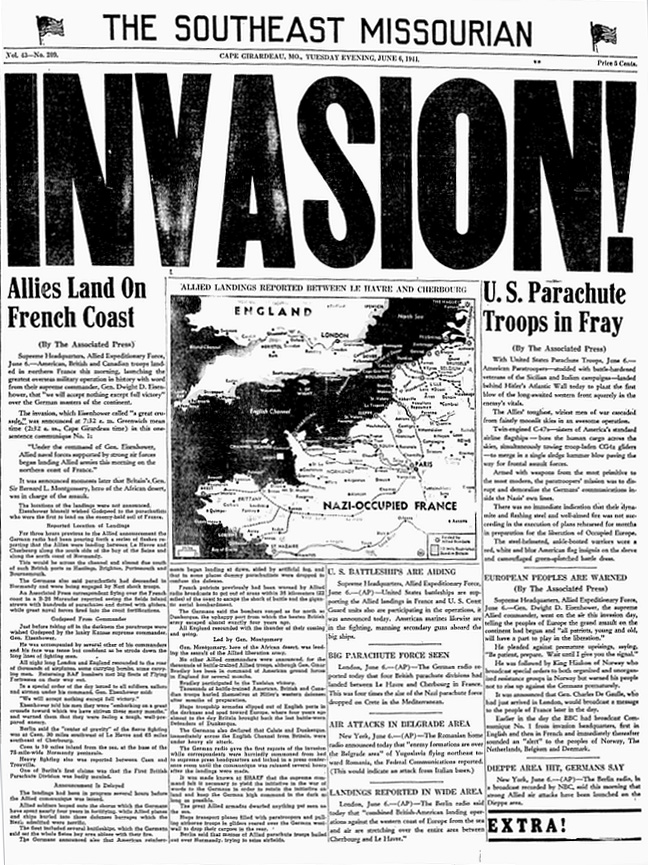 When my mother passed away in February 2004, I became my family's memory keeper. I inherited the big Tupperware container filled with family photos, the strongbox with various legal and personal documents, and a shoe box containing my Grandma Clara Glaus Stehr's five-year diaries, beginning in 1939 and continuing through her death in the early 1970s.

In 1939, Grandma would have been 37 years old, with a husband and two teen-age daughters. Her days were continuous hours of washing and mending clothes; sewing dresses for herself and her girls; scrubbing floors; canning tomatoes, sauerkraut, pickles, beans, peaches, cherries, etc.; mowing the lawn; tending the garden; and helping her husband, Ray, with their frequent home improvements. On weekends came the trips to New Hamburg to visit extended family.

What struck me, too, as I read the first few years recorded in the diaries was the frequency of the family's visits to their church, St. Mary's. Along with obligatory Sunday attendance at Mass, the family made numerous visits to church for Confession, choir practice, meetings, dances and Bingo, where the door prizes were such valuable items as a bar of soap, wash clothes or an apron.

And the church visits continued each day for the next few days, as the family joined the faithful of its parish, its community and the nation to pray for the safety of the men and women taking part in the Normandy invasion.

The Southeast Missourian, which published an extra edition on D-Day, followed the next day with an article describing the local reaction to the news from Europe. It also published the prayer offered over the radio by President Franklin D. Roosevelt the evening of the invasion.

Published June 7, 1944, in the Southeast Missourian:

That hundreds of Cape Girardeau residents took the invasion of France by our armies Tuesday with great seriousness was evidenced in the fact that they turned to a score of churches, holding special D-Day services, for prayer and meditation. A crowd of a little less than a thousand persons attended a community service Tuesday night at Courthouse Park.

For the service of the Exposition of the Blessed Sacrament, between 700 and 800 persons attended during the hours from 4 to 9 o'clock, and 400 of these were present in the hour between 8 and 9 o'clock, Monsignor H.F. Schuermann said.

Hundreds more were at special night services at First Baptist, Christ Evangelical, St. Mary's and St. Vincent's Catholic, Grace, Maple Avenue, Third Street Methodist, Church of God, Church of the Nazarene, Christian and Foursquare churches, while during the day open church doors saw many, particularly relatives of the men under arms, go to pray for the safety of their men and for victory.

Cites the Task Ahead

In a stirring D-Day address at the community service, President W.W. Parker of State College said that the task ahead is to bring nearer V-Day and then "may the world turn itself to the task of making D-Days forever unnecessary and impossible."

The service, called by Mayor R.E. Beckman, was attended by persons of every faith and brought out many visitors in the city stopping at the hotel, while some few persons were here from nearby communities. Preliminaries included the singing of "America" by Dr. J.H. Ruff, the accompaniment being played by the Municipal Band under the direction of William A. Shivelbine. The band also played "Pomp and Circumstance," and old hymn favorites were sung, these including "Faith of Our Fathers" and "Onward Christian Soldiers."

The scripture was read by the Rev. Miles H. Stotts of Grace Methodist Church and prayers were said by the Rev. T.J. Murphy, pastor of St. Vincent's Church, and the Rev. Bernard A. McIlhany of the Presbyterian Church. True Taylor, superintendent of Southeast Missouri Hospital, presided. Mayor Beckman read his proclamation.

Dr. Parker summed up the seriousness of D-Day and the mission of our fighting men as follows: "As we contemplate the situation let us hope that men are not again dying in vain. What folly it would be if this proves to be just another war. As the invasion progresses let us make up our minds that we will be a part of the world opinion that will demand that when the present war is ended a stable peace is established. It is easy to point out the difficulties involved in the formation of an international organization that can and will enforce peace. The same type of cooperation that we are witnessing on the part of the United Nations on the march to Berlin and Tokyo would guarantee the absence of war.

"Can it be said that we can cooperate to defeat powerful enemies but that we cannot or will not cooperate to keep them defeated? An enforced peace is not a contradiction in terms. There must be guarantees that guarantee. It can be3 done. It involves the application to international affairs of the same methods that we employ to keep peace domestically. You can't make a nation of good, but a coalition of nations with a ready force can make a nation act as though it were good. I favor forcing some nations to act as thought they were good. For practical purposes for a hundred years or so this may have to suffice. The occurrence of two world wars in half a generation makes the issue one that must be met. There is no dodging it. Education for peace is too slow a process, particularly when some nations educate only for death in war.

Published June 6, 1944, in the Southeast Missourian:

TEXT OF PRAYER ROOSEVELT TO READ OVER NATION TONIGHT

(By The Associated Press)

WASHINGTON, June 6. -- This is the invasion prayer which President Roosevelt wrote while Allied troops were landing on the cost of France and which he will read to the nation by radio at 9 o'clock (Cape Girardeau time) tonight:

In this poignant hour, I ask you to join me in prayer:

Almighty God: Our sons, pride of our nation, this day have set upon a mighty endeavor, a struggle to preserver our republic, our religion, and our civilization, and to set free a suffering humanity.

They will need Thy blessings. Their road will be long and hard. The enemy is strong. He may hurl back our forces. Success may not come with rushing speed, but we shall return again and again, and we know that by Thy grace, and by the righteousness of our cause, our sons will triumph.

They will be sore tried, by night and by day, without rest -- till the victory is won. The darkness will be rent by noise and flame. Men's souls will be shaken with he violences of war.

Some will never return. Embrace these, Father, and receive them, Thy heroic servants, into Thy kingdom.

And for us at home -- fathers, mothers, children, wives, sisters and brothers of brave men overseas, whose thoughts and prayers are ever with them -- help us, Almighty God, to rededicate ourselves to renewed faith in Thee in this hour of great sacrifice.

Many people have urged that I call the nation into a single day of special prayer. But because the road is long and the desire is great, I ask that our people devote themselves in continuance of prayer. As we rise to each new day, and again when each day is spent, let words of prayer be on our lips, invoking Thy help to our efforts.

Give us strength, too -- strength in our daily tasks, to redouble the contributions we make in the physical and material support of our armed forces.

And let our hearts be stout, to wait out the long travail, to bear sorrows that may come, to impart our courage unto our sons wheresoever they may be.

With thy blessing, we shall prevail over the unholy forces of our enemy. Help us to conquer the apostles of greed and racial arrogances. Lead us to the saving of our county, and with our sister nations into a world unity that will spell a sure peace -- a peace invulnerable to the schemings of unworthy men. And a peace that will let all men live in freedom, reaping the just rewards of their honest toil.

Thy will be done, Almighty God.

In last week's blog about a visit to Cape Girardeau by artist Thomas Hart Benton, I erroneously moved the Little Theater from Kent Library to Academic Hall. Thank you to careful reader Eric Seibel, who sent me a most gracious email alerting me to my mistake.

I strive for accuracy in all my writings, but sometimes errors slip past me. I will try harder...