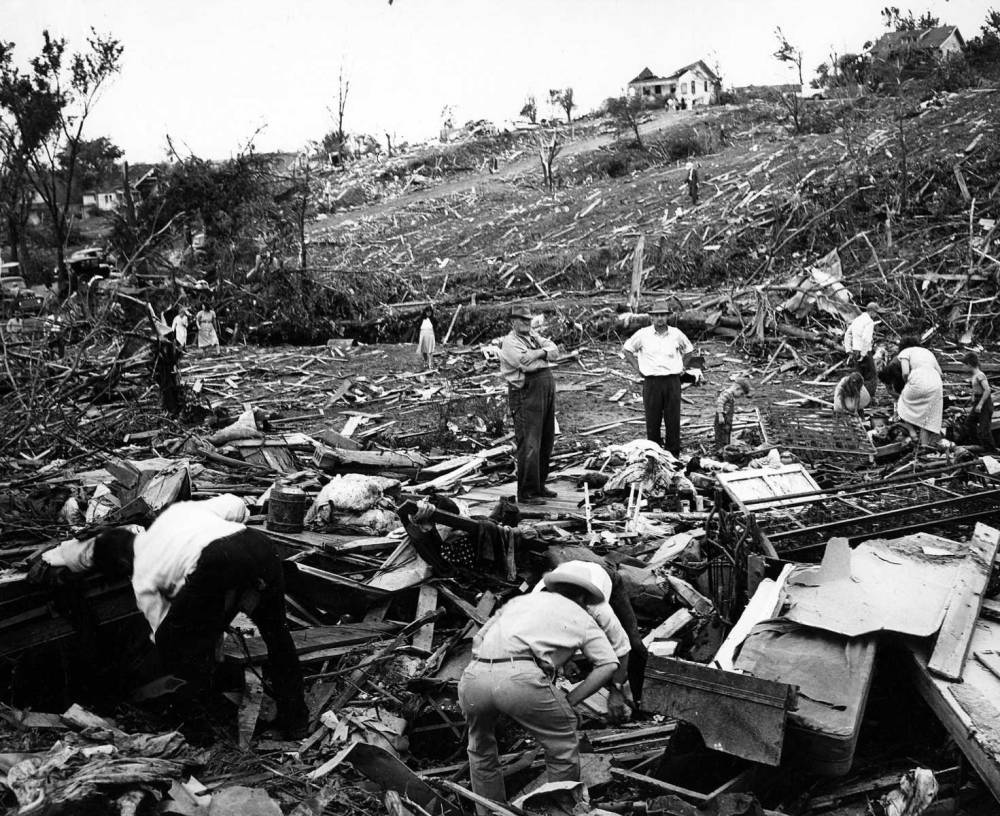 I decided several weeks ago NOT to write another blog on the Cape Girardeau tornado of May 21, 1949. But I couldn't let the 70th anniversary of that tragedy go by completely unmentioned.

So, instead, I include here the links to other blogs the Missourian has done about the the tornado, as well as a link to our 60th anniversary stories. I'm also including a list of those killed in the storm. May they never be forgotten.

The May 21, 1949 tornado left a trail of destruction through much of Cape Girardeau. In the aftermath 22 people were dead, 72 hospitalized and hundreds injured.

Here are those killed in Cape Girardeau by the storm:

Last week's "From the Morgue" blog contained the 1919 coverage of the burning of the 1869 Cape Girardeau railroad bonds that had long been a burden to both Cape Girardeau city and township. The blog also included a history of the bond issue by Cape Girardeau attorney Robert Whitelaw.

Whitelaw's view of the issue, it seems to me, was from his experience as a representative of this legislative district. It spoke of his efforts to pass legislation that lessened the burden on the citizenry and, ultimately, saw the bonds paid off and canceled.

One of the speakers at the 1919 ceremony that saw the destruction of the bonds in the big furnace at the county courthouse in Jackson was Judge William Paar, presiding judge of the County Court. He also reviewed the history of the bond issue, but gave more details as to its origins. The Southeast Missourian saw fit to publish his remarks as well, on May 14, 1919.

When the Cape Girardeau Township Railroad Bonds were burned last Friday, Judge (William) Paar, presiding judge of the County Court, made an address reviewing the history of the issuing of the bonds. Judge Paar said:

After the effects of the Civil War in 1861-5 became somewhat settled, the people began to look around for some means of travel that would put them closer together, and this spirit also became manifest in Cape Girardeau County.

The only means of travel then was by steamboats plying on the Mississippi River, and there were many boats then running out of St. Louis down the river, some of them going down to New Orleans, others to Memphis; other times up the Ohio, the Cumberland, Tennessee, Arkansas and Red rivers.

The only means of travel on land then was by vehicle drawn by oxen or horse, and people would come distances, all the way up to 150 miles, to Cape Girardeau County, which then was the leading business center in Southeast Missouri, to do their trading. Many would be on the trip from one to three weeks.

Tom Allen, who had become the owner of that short line of railroad which ran out of St. Louis to Iron County, conceived the idea of extending his railroad to a point on the Mississippi River, south of Cairo, Illinois.

Counties and cities began vying with each other in offering inducements to have the railroad pass through their territory. Accordingly, Cape Girardeau County also became imbued with the railroad fever, and, about the year 1867 or '68, elections were held in the county and township of Cape Girardeau, and at these elections propositions were voted on and carried, the county proposing to donate or take stock to the amount of $400,000, and the city or township of Cape Girardeau, $125,000. These sums were augmented by private subscriptions until at total of about $600,000 was raised.

Delegations were named which were authorized to (negotiate) with Mr. Allen and offer him, or his company, this sum of money as an inducement to build the proposed railroad touching the county in the northwest section, thence by way of Jackson to the city of Cape Girardeau, and from there on south to some point south of Cairo, Illinois.

What length of time Mr. Allen had this matter under consideration is not definitely known, but, after a time, it became apparent that Mr. Allen turned down the proposition offered by the county and would not run his road by way of this county unless the sum of $900,000 was raised.

It seems, however, that it was impossible for the citizens of the county and city of Cape Girardeau to raise that sum, and so Mr. Allen built the road, leaving out the county, except that it passed through a small section of the county in the southwest part of it.

While all this acted, in a manner, as a shock to the citizens of the county, yet it was only a short time until the railroad fever was again revived, but this time it only became apparent in the city and township of Cape Girardeau.

It being provided in the Missouri Constitution of 1865 (commonly known as the Drake Constitution), that any township within the county could lend aid toward the building of railroads, elections were held in both the city and township of Cape Girardeau in the year 1869. In both of these elections propositions were almost unanimously carried providing for the issue of bonds by each the city and township of Cape Girardeau of $150,000 or $300,000 for both.

This company was known as the Cape Girardeau & State Line Railroad. Bonds were received from the city and township and these were marketed principally in St.. Louis and New York.

Then grading was started on the road and about 40 miles of dump was built; when the money gave out. It was then expected that the company could raise funds by mortgages on that part of the roadbed already made, but about that time (the year 1873), a great financial panic swept over the entire country and this put a damper on railroad building.

The company began to look around for some corporation to take hold of and complete the road, and, finally, a company known as the Illinois, Missouri & Texas Railroad Company did take charge of the road, laid about three miles of track, and then quit.

After this the whole matter lay idle for a number of years, when finally, Mr. Louis Houck, about the year 1880, made a contract with the old time Cape Girardeau & State Line Railroad Company to finish the road from a point on the Belmont Branch of the St. Louis, Iron Mountain & Southern Railroad, known as Delta, a distance of 16 miles. This he did, coming into Cape about Jan. 1, 1881. Further than this I will not dwell on the subject as it is all known to the present generation.

Coming back to the issue of bonds by Cape Girardeau Township (I) will say, that as the township was not a body corporate, the County Court was by law authorized to act for and on behalf of the township, and, accordingly, $150,000 bonds were issued by the County Court, running 20 years and bearing 8% interest. From that time on annual tax levies were made to meet the interest on the bonds, and for the first few years these were paid, but, on account of the panic of 1873, and the high rates of interest that then had to be paid by persons who were borrowers, and the further fact that the railroad lay idle, the payment of high taxes became a burden and so, about the year 1874 or 1875 most people refused to pay railroad taxes and, as a consequence, the payment of interest on Cape Township bonds went by default.

Let it here be understood that the debt of the city and township of Cape Girardeau was between 25 and 35% of the actual value of all property in Cape City and values constantly diminishing. Then suit after suit was brought against the county in the Federal courts, judgments rendered and special levies of taxes were made but not paid.

Entanglements of all sorts arose.

Counsel was employed and the matter fought in the courts, even going so far as the Supreme Court of the United States.

At this time the whole debt, interest and costs amounted to about $300,000. This proposition was submitted to the voters, at a special election held in April 1889, and was carried by a large majority. Thereupon bonds to the amount of $180,000 were issued by the County Court, bearing interest at the rate of 4% for the first 10 years and 5% for the next 10 years.

Taxes were regularly levied by the court which were also paid without protest and the interest was regularly paid on the bonds.

Let it here be said to the credit of Hon. R.H. Whitelaw, who a number of years ago, while a member of the General Assembly of Cape Girardeau County, was instrumental in having a law passed permitting the use of a portion of the dramshop license collected in counties that had compromised their railroad indebtedness. After the lapse of 10 years, or after the time had expired for interest payment at 4%, the County Court again refunded what outstanding debt there was at 4 1/2% interest.

All of the debt of Cape Girardeau Township is now fully discharged, and while it should have been paid in 20 years, it took almost 50 years to get rid of the debt.

I therefore congratulate the citizens of the city and township of Cape Girardeau that they have gotten rid of this burden which, at times, was very oppressive.