A 1956 article in the Southeast Missourian notes that the Cape Girardeau chapter of the American Red Cross was established on May 28, 1917, almost 36 years to the day after Clara Barton founded the Red Cross.

According to the story: "The Red Cross chapter has two primary responsibilities that it must carry on to fulfill the basic obligations of the congressional charter. These are (1) service to servicemen, veterans and their dependents... and (2) disaster preparedness and relief..."

Seventy-five years ago this month, the county chapter received a mobile canteen to help its workers carry on its responsibilities.

Published March 8, 1944, in the Southeast Missourian: 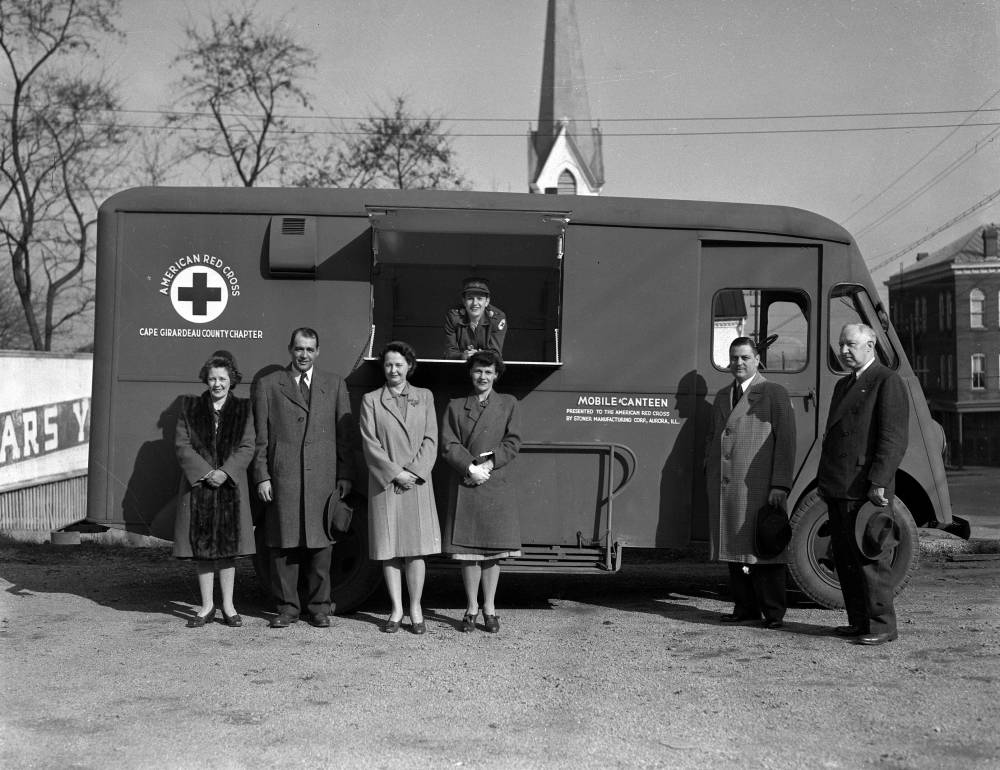 This is the mobile canteen given the Cape County chapter of the American Red Cross to be used in emergency work under the direction of the local disaster committee. In the photo, left to right, are Mrs. G.D. Tenkhoff, K.P. Oldfield, disaster chairman; Mrs. J.C. Woody, Mrs. Joe G. Howell, Miss Zoie Leuer (in canteen window), Willard Estes, who will have charge of the unit, and James A. Finch, chapter chairman. Women in the photo are volunteer workers in the Red Cross organization. (G.D. Fronabarger ~ Southeast Missourian archive)

MOBILE CANTEEN FOR EMERGENCY USE OF COUNTY RED CROSS

The Cape County chapter of the American Red Cross has received a mobile canteen, the gift of the national organization of American Red Cross, to be used in disaster work here. The outfit was first given to the Red Cross by the Stoner Mfg. Corp. of Aurora, Illinois.

The unit, valued at $1,865, includes equipment for meals, refrigeration for various purposes and, all in all, is designed to be of service in areas during an emergency when the normal life of a community or section is disrupted. It was brought back here from Detroit, Michigan, by Thomas G. Harris and is on display at the Groves Motor Co. The unit is built over a Ford chassis. Many such units are in service in various parts of the country and the Red Cross is using them in connection with its service to the armed forces.

The need for such a unit here has been apparent for some time. It will serve particularly well during floods and in other emergencies when it can be taken to the actual scenes and used in aiding unfortunates. Its use will be under the direction of the local disaster chairman, K.P. Oldfield. The unit will be in charge of Willard Estes, assisted by a canteen corps now being organized, and which will be instructed by J.C. Logan.

Mr. Oldfield, in pointing out the service of such units, said many are now in use at blood donor centers, in areas where epidemics break out, where troop trains become tied up and also furnish food to men who are on special guard duty during emergencies. The corps of workers with it will be a volunteer organization.

The company presenting the unit of the Red Cross is headed by Harry B. Stoner, and was founded in 1933. The firm's peace time product was coin operated vending machines, but when the war broke out it converted immediately to the making of cartridge cases, armor piercing shot and rifle grenades.

The firm was the first to fly the Minute Man flag with the 10 percent, denoting that employees were using 10 percent of their wages to buy war bonds. It also flies the Army and Navy "E" flag with the silver star, denoting continued excellence performance.