Last of the DAR stories 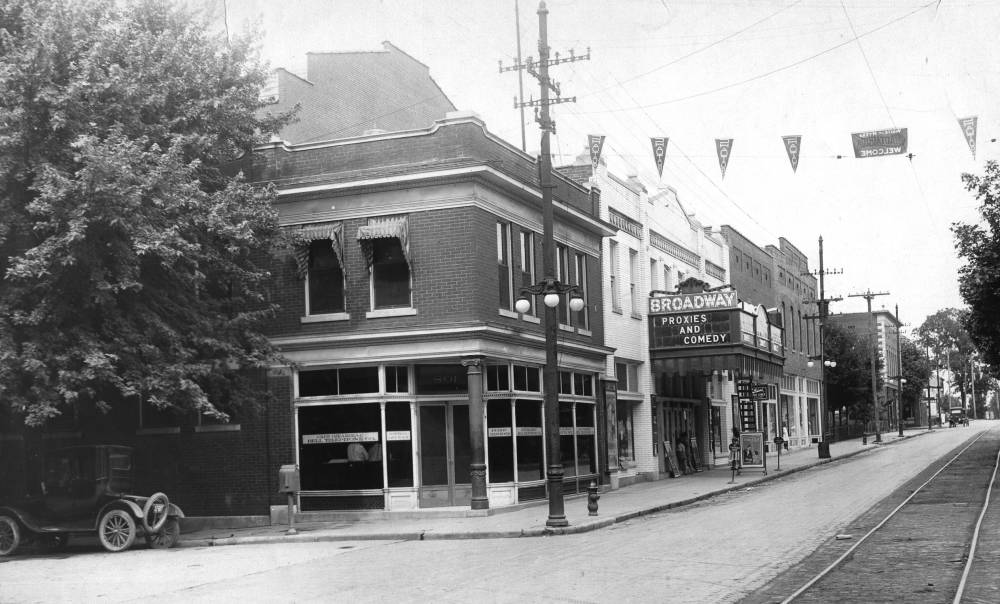 The Nancy Hunter Chapter of the Daughters of the American Revolution rented the New Broadway Theater for two days, showing "The Frontier Woman" and "Daddies" as a fundraiser in June 1924. In addition, the Daughters displayed family heirlooms in the windows of the Union Electric Light and Power Co., next door to the theater. (Southeast Missourian archive)

This blog completes the stories written by members of the Nancy Hunter Chapter of the Daughters of the American Revolution, first published in June 1924.

Under the auspices of the local chapter of the Daughters of the American Revolution, "The Frontier Woman," fifth of the series of historical pictures produced by the Yale University Press, will bed presented as one of the attractions at the New Broadway Theater Monday and Tuesday. The other picture will be the widely-advertised offering, "Daddies." The DAR chapter has rented the theater for the two nights -- Monday and Tuesday.

A number of members of the DAR, prominent women of the district, have written sketches of incidents concerning their ancestors, some having been printed Saturday, the remainder today.

Stephen had sailed on a former expedition in the fleet of Gates and Somers for Virginia in 1609. Two of the vessels were shipwrecked off the coast of Bermuda, and the island discovered in this way.

Stephen Hopkins owned a harp, which is the first one spoken of in the colony; he also was part owner of the first ship built in Plymouth. He owned the first horse on record in the colony in 1644, valued at 6 pounds sterling and bequeathed to his daughter, Constance. He was of the Governor's Council from Plymouth, 1623-1626. In 1637 one of the volunteers in aid of Massachusetts and Connecticut in their war with the Pequots.

Stephen Hopkins died in 1644 and his will was witnessed by Myles Standish and William Bradford.

On July 13, 1890, there was published in the Washington Post a short story of a woman who had shown much heroism in the Revolutionary War. With this article, Mary S. Lockwood called upon the descendants of the American Revolution to organize.

During Mrs. Lockwood's absence from the city that fall, Miss Mary Desha called a meeting at the Langham Hotel, of all the descendants of the Revolutionary War. Only three responded owning to the very bad weather. Miss Desha was appointed chairman. These women proceeded to revise a constitution and adopt it. They proposed Mrs. Benjamin Harrison (wife of the President of the United States) as the first president general. They declared this society to be national in its work. The actual organization then took place on Oct. 11, 1890, with 18 women signing the formal draft. Thus began the society that has grown to almost 200,000 women. On Feb. 24, 1896, during the seventh Continental Congress medals were presented to the founders of the National Society D.A.R., Mrs. Ellan Hardin Walworth, Mrs. Mary Lockwood, Miss Eugenia Washington and Miss Mary Desha.

It was through the record that Mary Desha succeeded in getting up that several members of the Nancy Hunter Chapter DAR go in on. Mary Desha is a cousin several times removed of the following members of this chapter: Mrs. Katie Block Whitelaw; her daughter, Mrs. Helen Whitelaw Rutherford; Mrs. Emma Shelton, Mrs. Maude Morse; the deceased Mrs. Rodney Whitelaw and Maude Medley Hope.

Our Revolutionary ancestor was Col. Anthony Bledsoe, who was called by he Indians Waving Corn Blades. He was very successful in his activities against the Indians, and the Indians feared him.

Benjamin Chandler, a descendant of Myles Standish and of John Aldea, was born at Duxbury, Massachusetts, spent most of his life in Vermont, commanded a company at the Battle of Bennington, in which his five sons served under him, and was killed at the close of that battle Aug. 16, 1777.

Myles Standish, after the death of his first wife, Rose, married a member of the Plymouth colony whose name appears in various documents as Mrs. Barbara Standish, and who is believed to have been his cousin, who came to America from Standish ____ some time after the coming of the Mayflower. Their eldest son, Alexander, two whom is father bequeathed "all my lands as heir apparent by lawful descent in Ormistick, Borscouge, Wrightington, Mandsley, Newbury, Cranston, and the Isle of Man," married Sarah Alden, one of the daughters of John and Priscilla, and a daughter of this marriage, Elizabeth Standish, became the wife of Same Delano, of the French family of De La Noye. A daughter, Elizabeth Delano, born at Duxbury, as were both of her parents, married Joseph Chandler III, and their son, Benjamin, was fifth in direct descent from both Myles Standish and John Alden.

The Chandlers came from England to America about 1637. Court records and other public documents of early days refer to members of the family frequently with the statement, "A good citizen, renowned for piety and patriotism." John Adams says in his diary, "The Chandlers exercised great influence in the County of Worcester until the Revolution, and lost favor with the Crown." Again, he says, "The family of the Chandlers were well bred, agreeable people, and I visited them as often as my school and my studies in the lawyer's office would admit."

At what time Benjamin Chandler removed from Duxbury is not known, but he lived for a time in Salisbury, Connecticut, and went fro there to Tinmouth, Vermont. His wife was Elizabeth Geoffreys, of a family well known in Massachusetts and Connecticut, and referred to in writings of the time as being vary patriotic, loyal, and determined. She died in Chandlersville, Ohio, at the age of 88. Sixty years ago her granddaughter, Matilda Chandler Gates, wrote to a niece, "No wonder, child, that you are patriotic, when your great-grandmother melted her pewter platter that had come down from the Mayflower to make bullets for the soldiers." Benjamin Chandler went into the battle in which he lost his life, using bullets which his wife had made from the platter that had come down to him from his war-like ancestor, Myles Standish.

Benjamin Chandler was considered a wealthy man in his day. He owned ironworks at Tinmouth, which the British raided, carrying away everything that could be of use to them. Tongs made at these ironworks and used by him are still in the possession of a descendant in New York. He was nearly 60 years of age at the beginning of the Revolution and when asked why, at his age, he went to war, he replied, "Because I am hale and hearty, and it has pleased God to give me sufficient of this world's goods that I can leave my family in comfort, while many of my neighbors must leave theirs in penury." He had provided for his family in the best possible way by giving them the best education of the time. The penmanship of his eldest son, Joseph, is unusually clear and beautiful. But the father's spirit was perhaps the best inheritance of the children. Among the settlers who went to Marietta, Ohio, in 1788, was the son, Joseph, who had been a minute man at Lexington, had later enlisted from Connecticut and served at Benningto9n. The journey from Vermont to Ohio was made in wagons and when loading, Joseph Chandler brought a hair mattress to put in, and was told that it would be impossible to take it. He replied, "Gentlemen, for 8 years I was mostly without a bed; I have slept on the ground, in the woods, on boards, in shocks of corn, and sometimes in snowdrifts. We are on our way to a wilderness and I am taking with me my wife and babies; I propose to take my mattress so that they can have something to sleep on while we go, and after we arrive. I take no furniture, as I think more of the mattress than of anything else." It is needless to say that it went. Long afterward it was divided among a number of his descendants, and soft pillow made of it are still in existence. His pocketbook, snuffbox, and a black and white woven coverlet which accompanied the mattress are also in the possession of descendants.

The Chandler cane was given to Joseph Chandler by his son-in-law, Timothy Gates, of the Gates family of the Revolution, and a metal cross was inserted in it by him as a memorial of the war. During the war of 1812 it was in the possession of a Chandler, who took part in that conflict, and afterward placed a heart in the cane as an emblem. A son of this soldier of 1812 was in the Mexican war and added a crescent to the cane. After the death of Robert Chandler in the battle of Shiloh, his family added a shield. During the Spanish-American war and the recent war it was in the possession of New York descendants who were in the service, so that it has belonged successively to members of the family who have taken part in every war in which the United States has been engage3d.

Benjamin Chandler's burial place is not now known. Joseph Chandler spent his last years with a son in Illinois and died at Otterville, Illinois, Oct. 4, 1844, 91 years of age.