Gas filling stations made their Cape debut in 1917 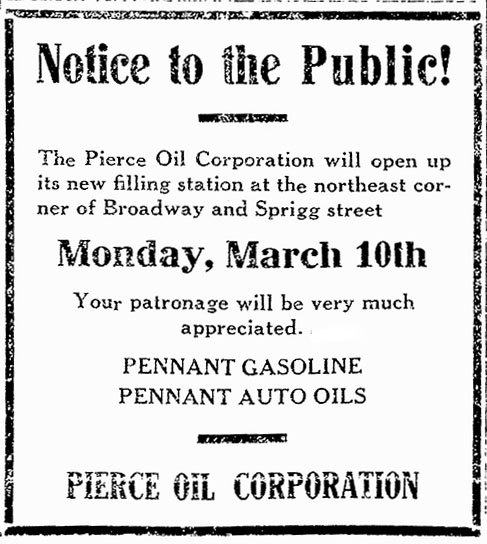 This ad, published in The Southeast Missourian on March 6, 1919, caught my eye recently. And it made me wonder if it could have been the first gasoline filling station in Cape Girardeau.

After a little bit of hunting, I found that it was not the first. That honor goes to a Standard Oil Co. station at the southeast corner of Sprigg and Themis streets, established on Aug. 16, 1917. 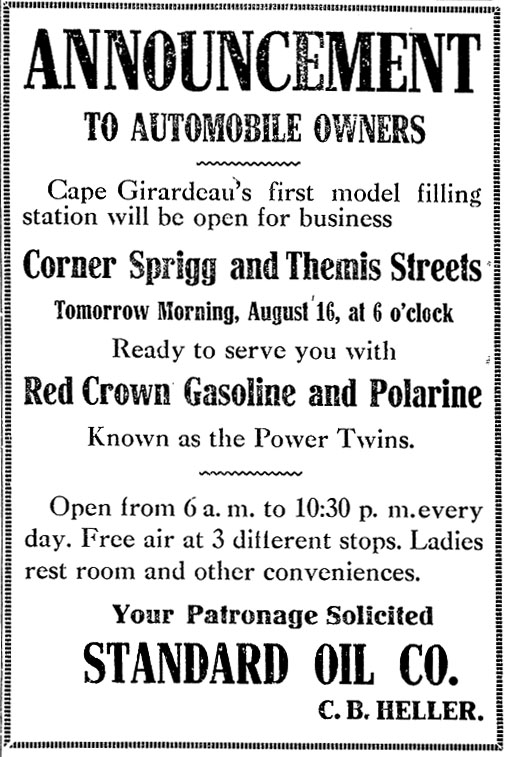 While a 1917 ad indicates that C.B. Heller managed the station, other clippings show the man in charge that year was Joe Selle. Interestingly, his employment at the station was interrupted by World War I. He answered Uncle Sam's call in August 1918, serving stateside apparently until the Armistice. He returned to Cape Girardeau in January 1919, taking up his managerial duties at the station at Sprigg and Themis once more.

Selle was still working for Standard Oil, when this article was published in 1949. It provides a pretty good history of the oil business in Cape Girardeau.

90th Anniversary of Industry Observed; Growth in Girardeau from Modest Start Is Recalled by Business.

This is Oil Progress week, observed nationally, and in Cape Girardeau it's something of an event -- to be marked with a big parade Thursday -- and it gives the industry an opportunity to tell the community just how important it is. It has been 90 years since the first oil well was brought in at Titusville, Pennsylvania, and gasoline and motor oils have been in use in Cape Girardeau probably less than 50 years. But, from a very modest beginning the industry has now developed into a $55,000,000 a year business in Cape Girardeau and made this city the hub for distribution over a great territory.

That is a figure, and it does not include retail sales locally of gasoline and motor oil, but does take in the value of 30,000,000 gallons of gasoline distributed every month from the six major oil terminals located on the Mississippi River, and includes a near million dollar payroll for more than 300 persons directly employed in the industry here.

It was just 38 years ago the first gasoline pumps were installed in the city and these were capable of pumping but one gallon of gasoline at a time.

Naturally, the advent of gasoline pushed the development of the automobile and its usage, but the first one owned by a Cape Girardeau resident was a White Steamer, bought in 1902 in Detroit by Dr. A.D. Blomeyer, and the first gasoline powered car was a Great Northern, bought in 1904 by George McBride. Garages came into existence here in 1910 and 1911.

From a modest beginning Cape Girardeau has become the location of six major Mississippi River oil terminals -- Standard, Shell, J.D. Streett, Simpson, United and Allied companies, and a number of lesser terminals and bulk plants. An average of 30,000,000 gallons of gasoline, a million gallons of fuel oil and 50,000 gallons of lubricating oils are distributed from Cape Girardeau every moth over a wide territory embracing all of Southeast Missouri and southern Illinois.

These terminals employ about 150 persons, in addition to executives of the companies, and Cape Girardeau has 45 retail filling stations within its corporate limits. The direct payroll, exclusive of company executives, runs a little better than $900,000 a year and a little more than a million dollars counting these executives. The filling stations have a normal payroll of between 175 and 180 persons. Then, not taken into consideration is the payroll and great volume of commercial business which has developed because of gasoline -- that of the many garages, automobile and farm machinery agencies, the parts establishments and aviation. There are 28 garages in the city.

As far as can be determined, W.D. Black retailed the first gasoline in Cape Girardeau. His garage stood on the present Broadway site of the Presbyterian Church Education Building. A small one-gallon pump was located in front of the building. That was in 1911. 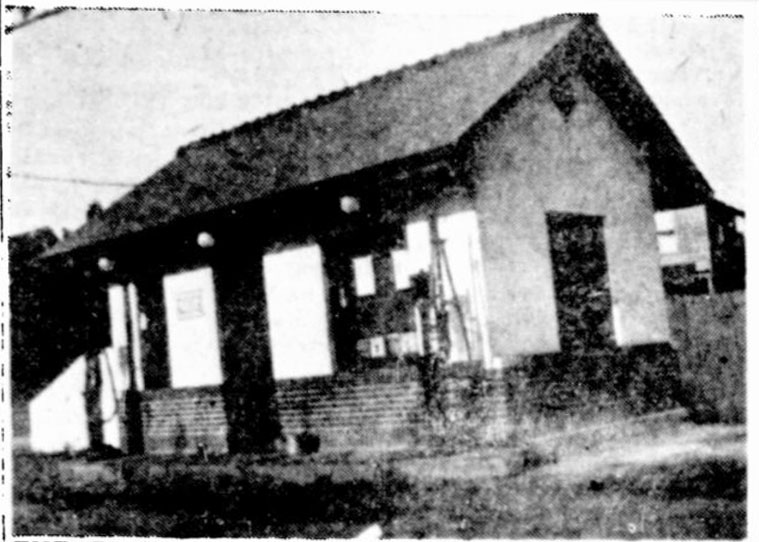 The first actual drive-in gasoline filling station in Cape Girardeau was this structure erected by the Standard Oil Co. at the southeast corner of Sprigg and Themis streets and opened Aug. 16, 1917, with Joe Selle, still with the Standard organization here, as manager. (Southeast Missourian archive)

The first garage was opened Jan. 10, 1910, at 419 Broadway by A.J. Vogel, who had a Ford agency. In frequent succession others were opened by Standard Oil Co. at Sprigg and Themis streets and the old St. Louis Oil Co. at Broadway and Harmony Street. First to open was the Standard station, Aug. 16, 1917, with Joe Selle as manager. He is still with the Standard organization here.

The old Pierce Oil Co. had a small bulk station, dealing mostly with kerosene, on North Main Street, this probably being the first bulk plant in the city, and horse-drawn wagons peddled the fuel over the city.

With gasoline being made available in increasing quantities the practical usage of motor vehicles was established. William F. Gockel inaugurated the first bus service between Cape Girardeau and Jackson in 1904. Later, W.D. Black operated service cars between those two points and between Cape Girardeau and Illmo, the one-way fare being 75 cents and two schedules were operated each way daily. Taking formal recognition of the automobile as something here to stay, the city began licensing cars in 1905, charging an annual fee of $5. 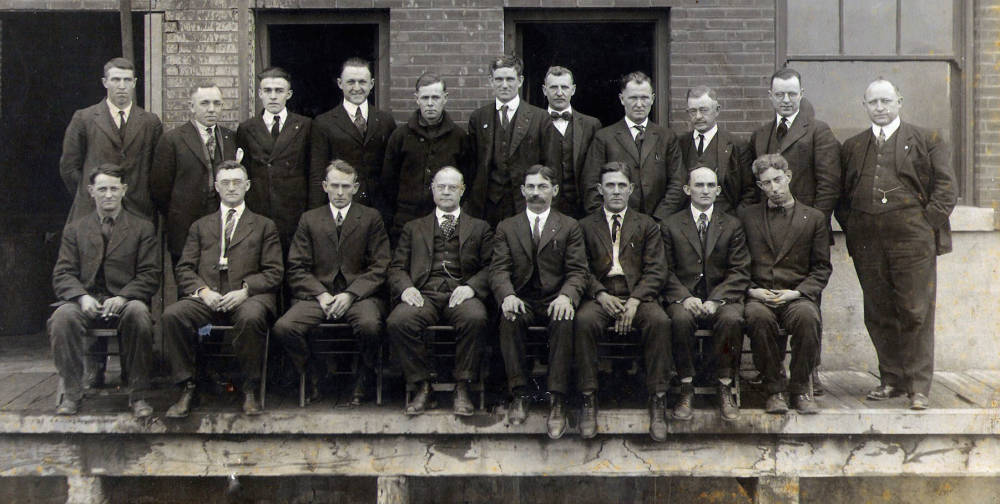 Joseph J. Selle died on March 2, 1962, at a local hospital. His obituary, published in The Southeast Missourian March 3, 1962, noted: "For 41 years, Mr. Selle was employed by the Standard Oil Co. His career began on Aug. 16, 19176, in one of Cape Girardeau's first service stations, located at Sprigg and Themis. After a brief tour of duty during World War I, he returned to his position as a service station attendant. On March 1, 1920, he became a general salesman and agent instructor. Later, he served as a reseller salesman, residing at Farmington (Missouri) and Cape Girardeau. He then became superintendent of the bulk plant and was plant operator for six years, prior to his retirement in 1948." This last sentence conflicts with the 1949 article above, which indicated Selle was still employed by Standard.