A dynamite solution to a water problem

In researching last week's blog about the former I. Ben Miller ice cream factory on South Spanish Street, I came across another interesting story that told of the use of nitroglycerine to dig a water well in the rear of the plant. 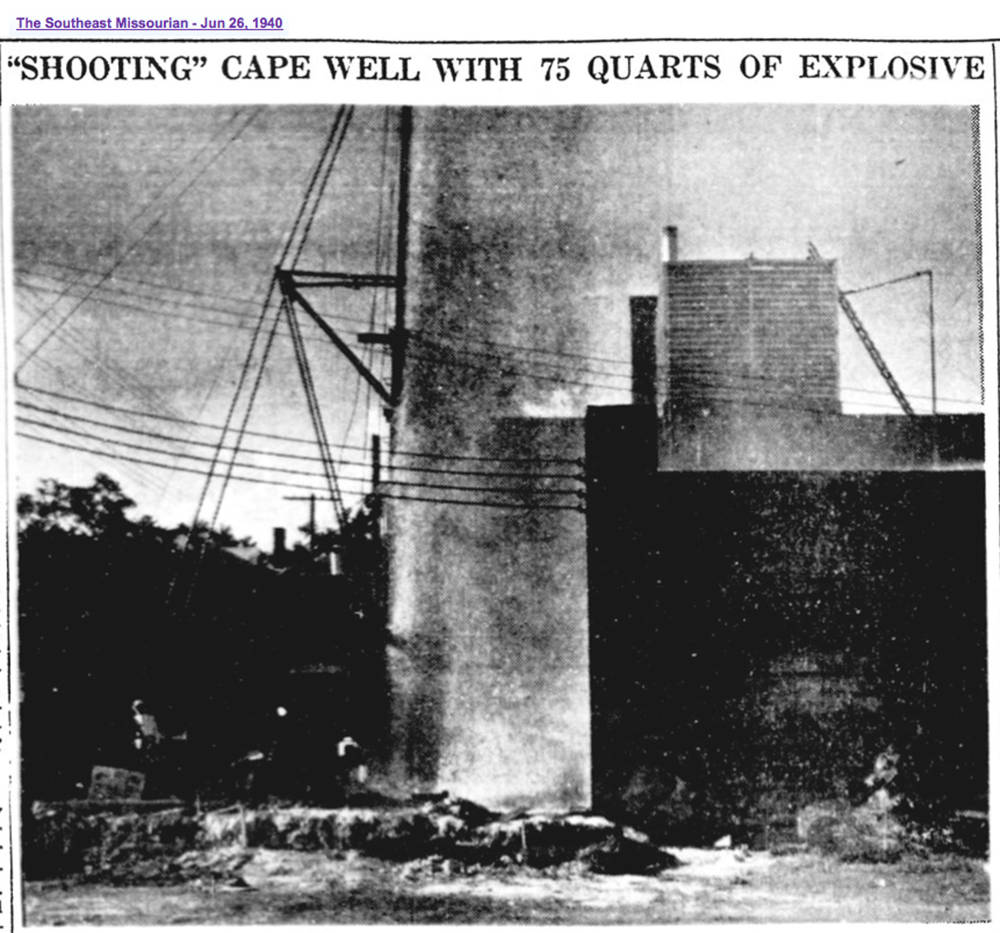 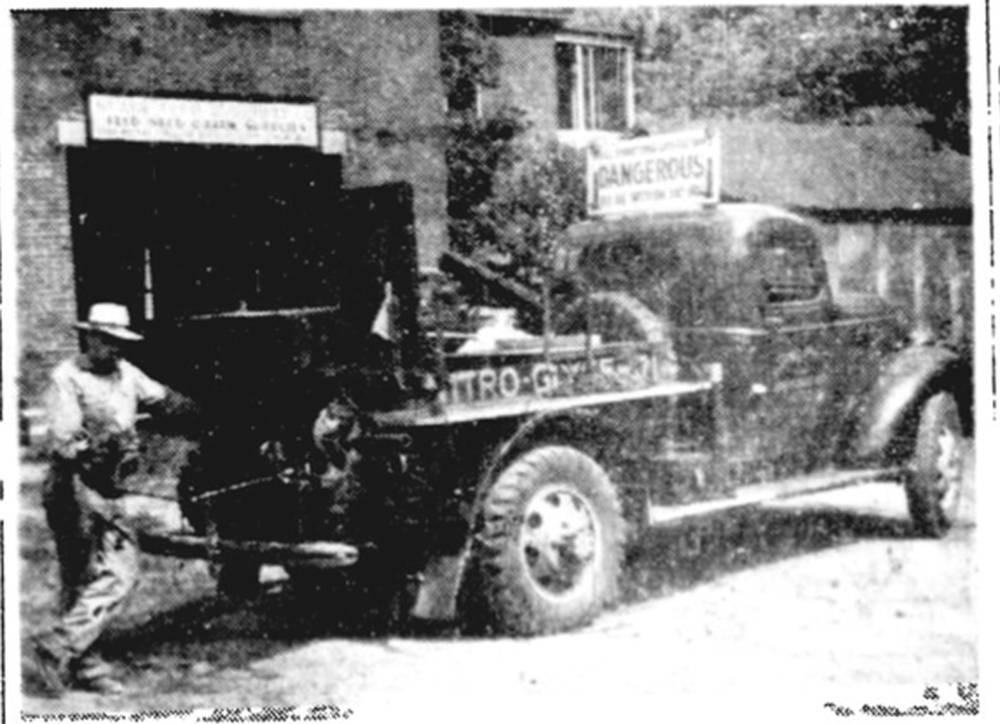 The photo at the top, made late Tuesday afternoon, shows a 100-foot column of water spouting from a 1,200-foot, newly-drilled water well at the rear of the Midwest Dairy Products Co. plant, 25 S. Spanish St., when 75 quarts of nitroglycerin were discharged at the bottom of the shaft to loosen the sand strata, permitting the water to flow freely into the well. Below is M.E. Cooper, explosives expert of the DuPont de NeMours Co., who is stationed at Centralia, Illinois, to "shoot" oil wells, standing beside his truck which brought the explosive here and from which and electrically operated line lowered the explosive into the shaft. Exploded on the earth's surface, the nitro, would have had sufficient force to wreck the city, Cooper said.

BLAST 2,100-FEET UNDER GROUND BRINGS IN WATER WELL IN CAPE

Seventy-five quarts of nitroglycerin, enough to blow Cape Girardeau right off the map, exploded in the downtown section late Tuesday afternoon, but, strangely enough, many persons within a short distance of the blast knew nothing of it. The charge was set of 1,200 feet below the earth's surface, at the bottom of a newly-drilled water well at the rear of the Midwest Dairy Products Co. plant, 25 S. Spanish St.

The idea was to get water, and get water it did. The charge, controlled by a two-hour time bomb, sent a pillar of water more than 1200 feet into the air, and gas, forming in the earth pocket created by the detonation, a few minutes later send a second spiral of water high above the roofs of downtown buildings

To Get Cold Water

Drilling of the well, to furnish a supply of cold water for the cooling units in the Midwest plant, was completed early Tuesday after two months work by the Haverstick Well & Equipment Co. of De Soto (Missouri). Company officials explained that during the summer the temperature of the city's water supply rises too much to economically operate the cooling equipment used in the manufacture of ice cream and other products, hence the new supply was sought. The drilling went through rock for almost all the distance except the bottom 65 feet of the well. The explosive was set off to pulverize the St. Peters sand strata at the bottom of the well and permit the water to flow freely into the well

M.E. Cooper, explosives expert for the DuPont de NeMours Co., who is stationed at Centralia, Illinois, where he "shoots" oil wells to bring them into production as they are drilled, was called here to do the job. Virtually a half-day of preparation was necessary.

The explosive was poured into tubes, a quart to a foot, making a tube charge 75 feet in length About midway in the tube sections, the two-hour time bomb, a delicate instrument equipped with dynamite, was installed. The force of the dynamite explosion, set off by the time bomb, had sufficient percussion to set off the nitro.

A small crowd, learning of the "shooting," gathered at a safe distance. The bomb went off just a few minutes before the scheduled time. There was no noise of an explosion. There was a slight earthquake-like rumble, a tremor of the ground, and a column of water spouted high into the air. The explosive was covered by about 18,000 pounds of water which had seeped into the well.

Quite a few people who were standing near the well got a ducking. The water subsided, but soon another rumble told of another approaching geyser, occurring about five minutes after the initial spout. Gas forming in the earth pocket had to escape. This sent the water more than 100 feet into the air and the well then settled down to a normal flow, a small amount of water flowing over the top of the casing...

Mr. Cooper explained that the explosion concentrated at a great depth, tore a great cavity at the bottom of the well, pulverizing the sand and permitting the water to flow freely into the well shaft. Had the 75 quarts of nitro been exploded on the earth's surface, it would have wrecked virtually all of the city and would have had sufficient force to kill persons within two miles of the blast.

"You've just got to know what this nitro's for and, more important, how to use it," he commented.