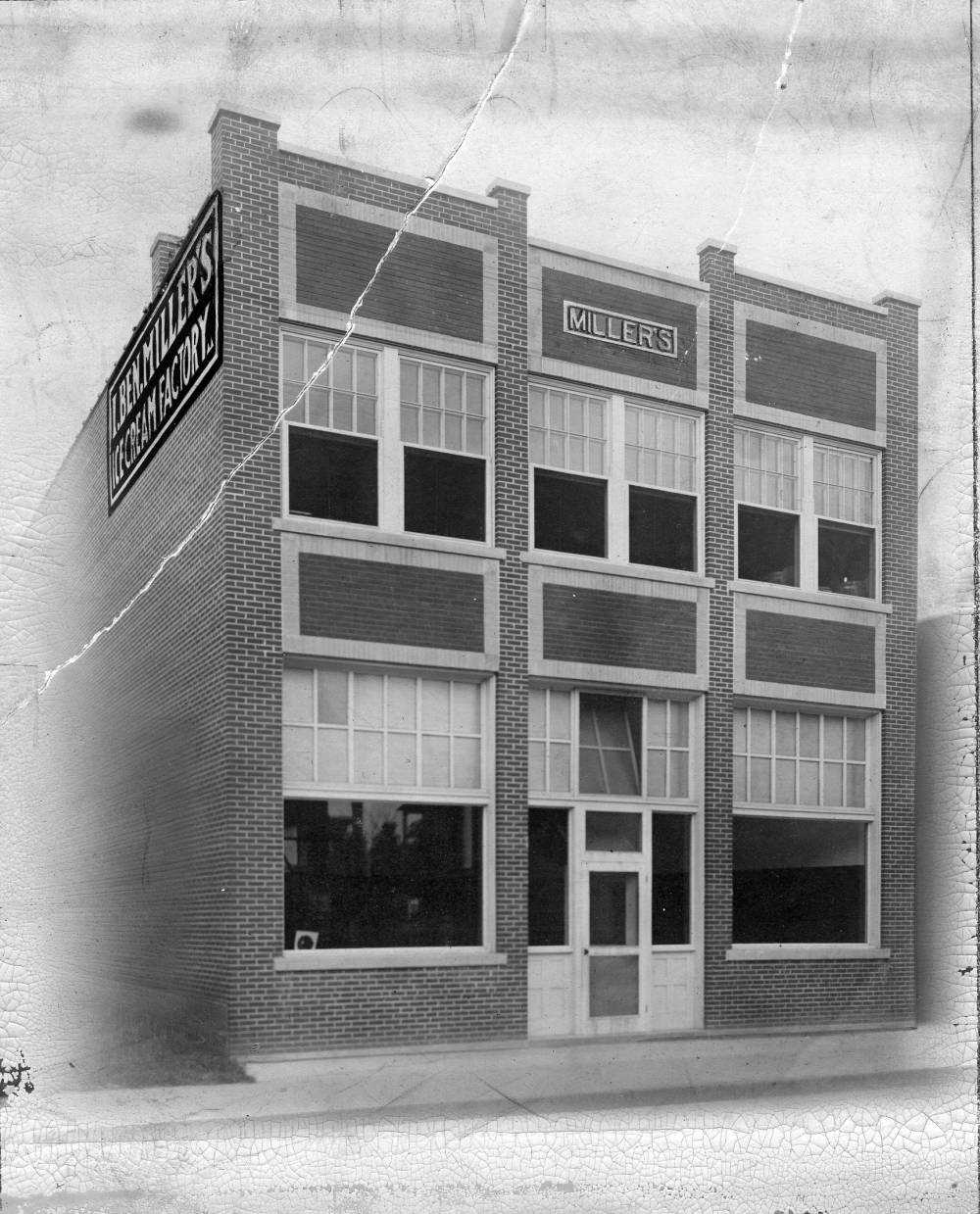 I. Ben Miller, Cape Girardeau's original ice cream man, moved his ice cream and candy manufacturing plant from a Water Street building to the above structure on South Spanish Street in the fall of 1916. Construction on the building began in late February or early March of that year, and the contractor was S. Boutin. The factory stood just south of Klostermann's Bee Store, now known as the Alliance Building.

While the latter building has been lovingly restored, the Miller building met its demise in a devastating fire 50 years ago this month.

The Miller ice cream factory merged with Midwest Dairy Products Corp., in 1928, and Miller retired from active management, after having been in the ice cream business 35 years. The local factory continued to operate under the Miller name. 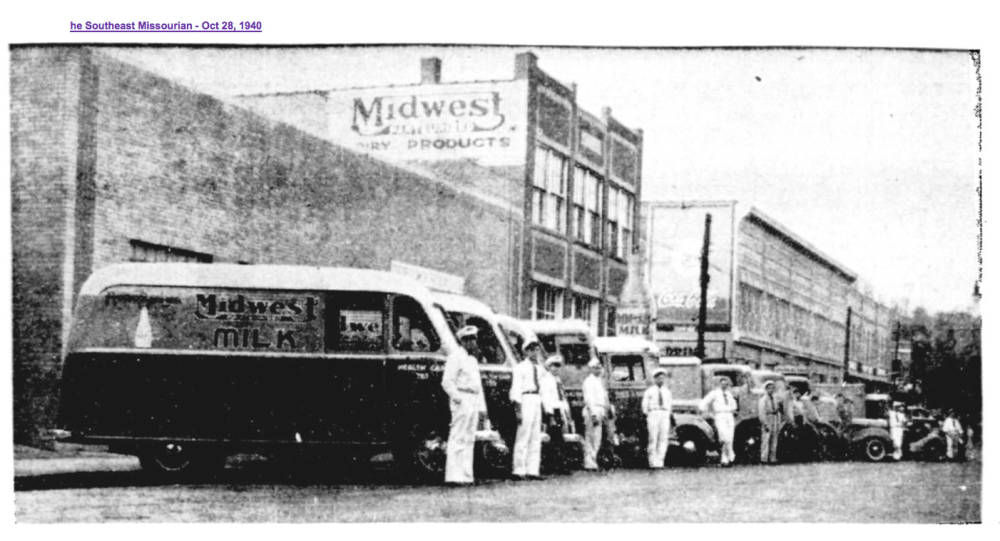 In 1935, forced out of the dairy business because of high operating costs, Miller sold his Lila Drew Dairy to Midwest Dairy. Midwest continued to operate out of the Spanish Street location, even building a one-story, 62-by-100-foot annex south of the structure in 1938 for $5,000. It was used for storage and as a garage. Midwest finally sold the building in December 1968 to Hutson's Furniture Co.

The latter was preparing to use the building as a warehouse, when tragedy struck late in January 1969.

Heavy smoke, sending a pall over the downtown area, and then flames shot out of the old Midwest Dairy Co. building at 25 S. Spanish St., early this afternoon as firemen fought to control the blaze.

The building is owned by Hutson's Furniture Co., and was being used as a warehouse.

The fire department's ladder truck and other equipment were dispatched to the scene. Firemen worked on the inside with oxygen masks as heavy smoke poured out of the structure.

A witness at the scene reported a workman had been using a cutting torch in the building. It was not known, however, if the fire had started from this source.

At first only heavy, oily, brown smoke came from the rear of the building. About a half hour later, however, flames shot out of the top and began creeping toward the front of the structure.

At the beginning the smoke appeared to come principally from the northwest corner of the structure.

An explosion was heard after the fire was underway, and several windows were blown out by its force. A crack two or three inches wide appeared down the front of the structure.

There were no immediate reports of injuries.

Firemen from all three stations answered the alarm. The ladder truck was not used immediately, but hoses were strung on the ground from several sources of water supply.

The building was formerly the regional headquarters for Midwest Dairy Products Co., and was elaborately paneled and staffed at that time for executives of the region.

Subsequently the operation was reduced in scope and gradually was phased out. Midwest now has its operations at 224 Merriwether. 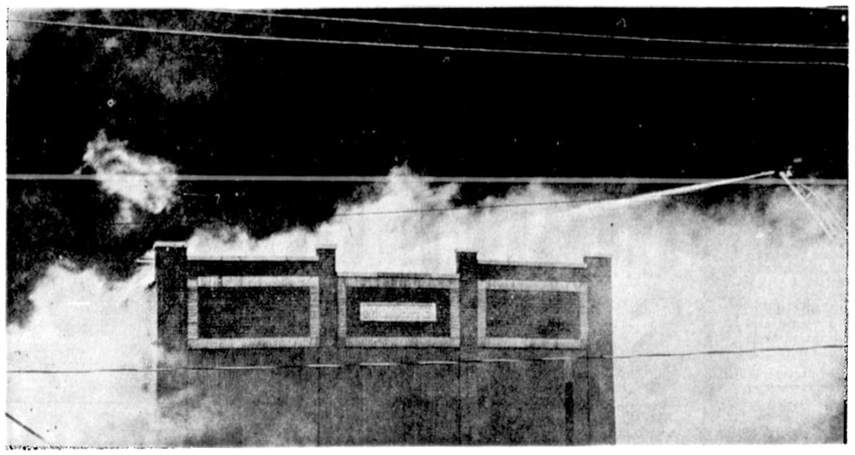 Almost hidden by swirls of heavy brown, oily smoke, Fireman James Foister mans a hose at the top of the city's ladder truck at the fire at the old I. Ben Miller and subsequent Midwest Dairy Co. building, 25 S. Spanish, Wednesday afternoon. Fireman Foister and other members of the department worked in a driving rain and low barometric pressure that kept a heavy pall of smoke hugging the ground, sending a noxious odor over the downtown section.

WAREHOUSE FIRE SET OFF BY TORCH

He said he operator of the torch earlier had thought he had extinguished the fire which started in insulation, but the flames spread after the man had gone to lunch.

The blaze, which burned out the inside of the building but left the brick walls standing, kept equipment from all three fire stations and all available firemen at the scene for much of the afternoon.

The fire was fought during a driving rain. A brisk south wind pushed heavy brown smoke over the major business sections of the city.

Some nearby residents were evacuated from their homes.

The fire apparently started around 12:30, being first noticed by Mrs. Viola Baker, the owner of Baker's Big Burger, situated across the street. She said she noticed smoke coming out of a crack around the windows of the building.

Mrs. Baker said she contacted Hutson's Furniture, the owner of the building, and they called the fire department after going up the street to check the building.

The first units on arriving at the scene found that the building was full of dark brown smoke, from the burning cork insulation. Chief Lewis said a welder, hired to cut away pipes and other fixtures to make way for a warehouse complex, had noticed the fire in the framework of the building. He said the welder told him that he had cut away some of the pipes and had started a small smoldering fire in doing so.
The welder, who remains unidentified as of this morning, stated that he had put about five gallons of water on the blaze before leaving or lunch, thinking it was out.

The heavy smoke necessitated Chief Lewis having to enter the building with oxygen equipment on to search for occupants. While in the building he said he fell and his helmet was lost. Found later, it gave a good example of the heat in the building, as it was melted flat.

Soon after all the units had arrived on the scene, an explosion in the two story section of the building ripped open one of the milk coolers, causing the front of the building to buckle and a few windows to shatter.

Early in the fire there was a fear that the building would collapse, firemen at the scene said. Some of the bricks in the building appeared pushed out to observers on the street. 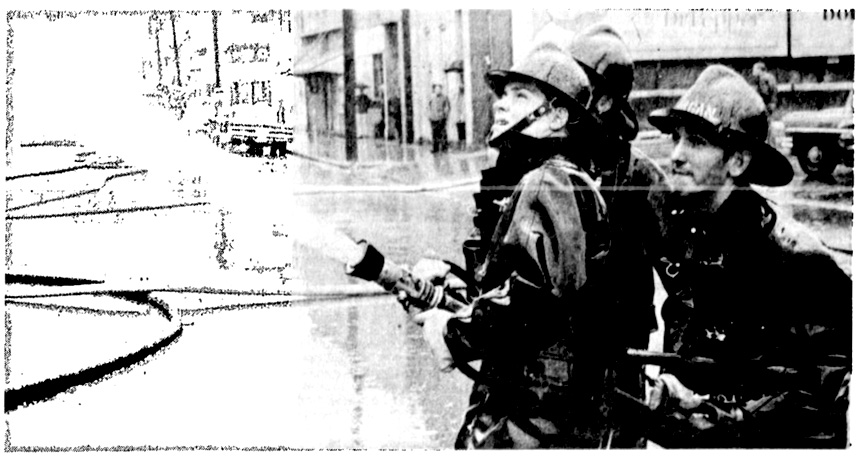 Three firemen are required to hold a high pressure hose as they pour water into the building. From the left are David Suttles, Woodrow McLain (partially hidden) and Gordon Morgan.

The fire chief said that the new 1,000-gallon-per-minute pumpers, purchased only a year ago, were instrumental in feeding the much needed water into the building. Two of these new trucks were used plus two pumpers able to pump up to 750 gallons of water per minute.

According to Chief Lewis, the fire wasn't brought under control until 3:10, two hours and twenty minutes after firemen were called to the scene. He was also thankful that the spectators stayed out of the way, and praised McDonald's for providing food and coffee during the fire.

Today, Lynn Hutson of Hutson's Furniture, the new owner of the building, said the structure would probably be judged a total loss but could not give a definite estimate of the damage until insurance adjusters arrived. He said it was his guess that over $100,000 would be needed to replace the structure.

Mr. Hutson said the pipes, compressors and other dairy fixtures were being cut out by Robert Davis Co., Denver, Colorado. The firm had contracted for the job and it was one of its employees who was cutting out the pipes at the time of the fire.

The building itself is somewhat of a landmark in Cape Girardeau. I. Ben Miller, the builder of the structure, a former resident at 24 S. Lorimier, started in the ice cream business on Main Street in 1893. His first plant was situated where the present Montgomery Ward retail store is located.

He later moved his plant to the Spanish Street location in 1918 (Other Missourian records say 1916. - Sharon), investing about $40,000 in the plant. He continued the business until 1928, when he sold the building to Midwest Dairy Products.

The building continued to be the main source of supply to ice cream lovers in the district throughout the 1930s and '40s. The Midwest Dairy held an open house in the building in 1940, with many district residents attending.

The building continued to be the center of operations for Midwest until it was purchased by Hutson's in December. The building was bought from Midland Dairy Corp., of Dallas, Texas, a holding company of Midwest.

Out of curiosity, I checked to see what coverage the Cape Girardeau Bulletin had published of of the fire. It consisted of a front page photo and brief story on Jan. 31, 1969. Thanks to Katherine Cochran, that image survives, along with a second, unpublished photo. 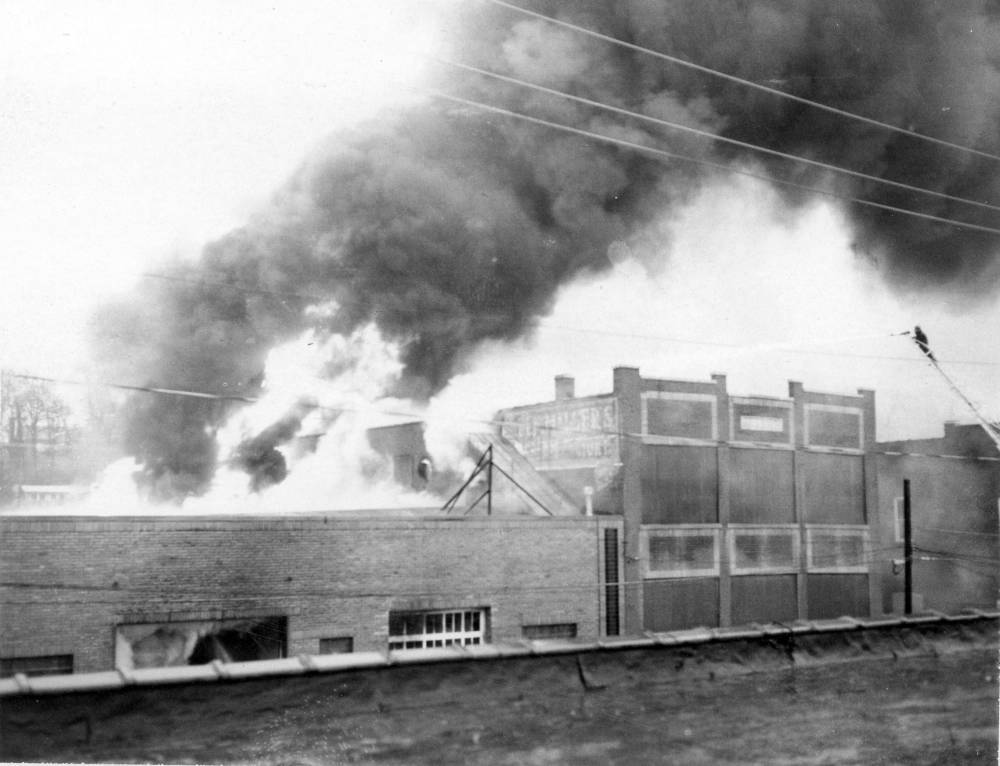 Creating spectator interest Wednesday during the noon hour and early afternoon was a spectacular fire at 25 S. Spanish St., that demolished the former Midwest Dairy Co. building; The above picture, taken from the roof of the Summers Sporting Goods, 30 S. Spanish St., shows the building engulfed in flames with heavy smoke pouring out of the roof.

Firemen fought the 3-alarm fire for many hours, before bringing the flames under control, even during Wednesday's heavy rain. Note fireman on top of ladder at right directing stream of water on the inferno.

The building was being renovated at the time for use by Hutson Furniture Co. as a warehouse. Sparks from an acetylene torch being used by one of the workmen cutting pipe, caused an explosion, and according to passersby, the front wall "bulged out" from the explosion preceding the fire. None of the workmen were injured.

Heavy smoke covered the downtown Cape area, as far up as the old Courthouse. 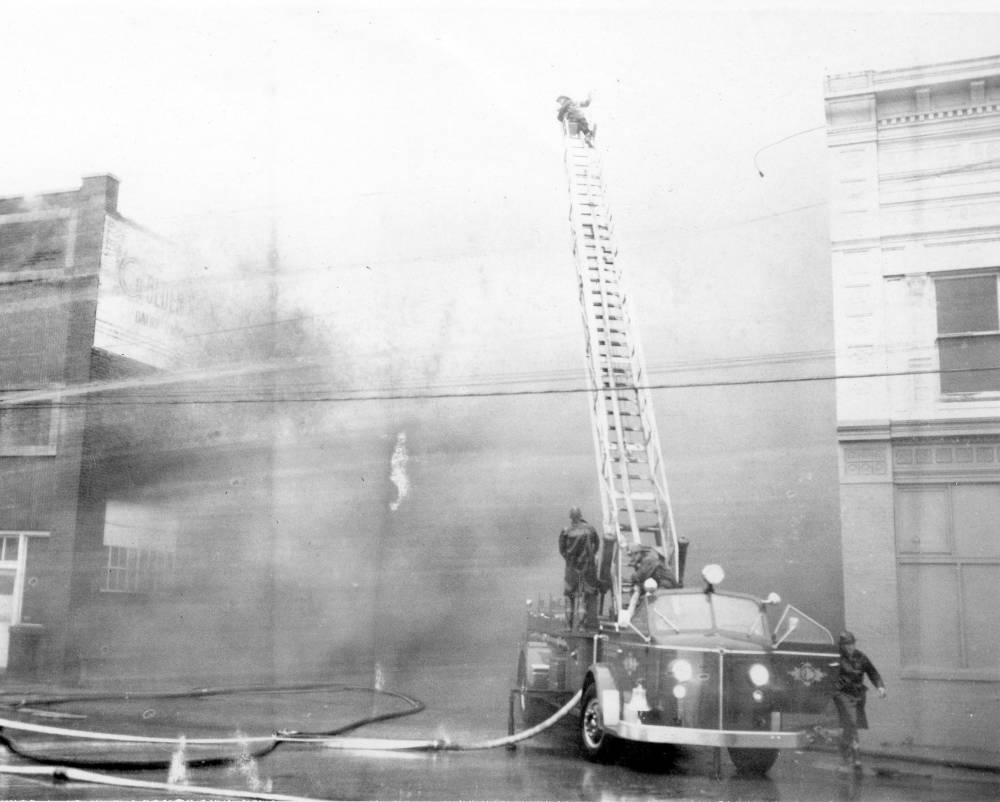 The charred remnants of the building remained standing almost another year and a half. Late in June 1970, in compliance with a city ordinance ordering its removal because of its "dangerous condition," Hutson had the walls demolished. The vacant lot was later paved for parking.