Over the years, I've often heard people refer to an early Southeast Missourian sports writer named Emmett Kelly, who started his career with this newspaper in 1928 and was still pounding out stories for the Missourian when he died in 1961. But it wasn't until recently that I made the connection between Emmett and Judge Frank Kelly.

In reading the latter's obituary published in January 1944 on the front page of the Missourian, I learned that he was the longtime Missourian reporter's father.

Frank Kelly sat on the bench in Southeast Missouri for 28 years and before that was the prosecuting attorney for Scott County. 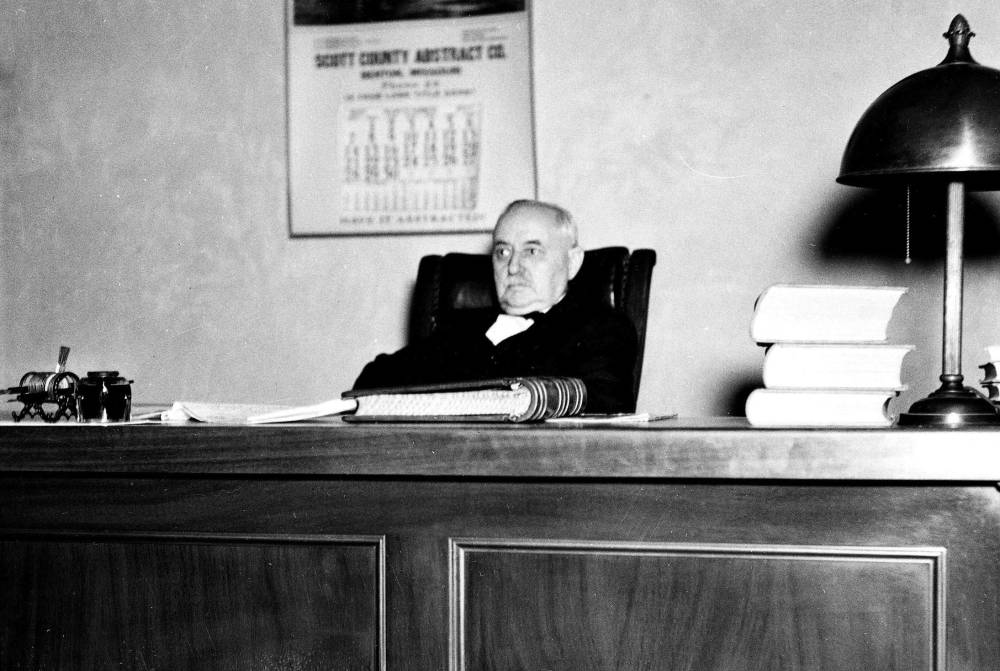 Judge Frank Kelly, 76 years old, for 28 years judge of the 28th Judicial District, comprising Cape, Scott and Mississippi counties, died at 6 a.m. today at Saint Francis Hospital. His death came after several weeks of ill health, but he was able to be up until last Saturday.

He was taken to the hospital early Saturday morning from his home in the Leonora Apartments after suffering a hemorrhage. He suffered another the following day and his condition had become greatly weakened.

The body was removed to the Walther Funeral Home, where funeral services will be conducted at 2:30 o'clock Friday afternoon by the Rev. John L. Taylor, pastor of Centenary Methodist Church. Burial will be in Memorial Park Cemetery.

Judge Kelly was born Feb. 28, 1867, in St. Louis. When a small boy he moved with his parents to a farm near Victoria, in Jefferson County. He attended the public schools in the village that is now Crystal City and after establishment of a glass factory at Crystal City was employed in the plant for four years. The family had for a time resided in Crystal City and when Judge Kelly was about 14 years old the family moved back to the farm near Victoria. He worked for a while on the farm and later was employed in brick plants at Crystal City and De Soto. In 1884, when he was 17 years old he had the misfortune of losing one of his legs and, realizing he could not do manual labor, set about educating himself.

After completing his country school work, in 1889, Judge Kelly entered the Old Normal School in Cape Girardeau and after attending the school for a year went back to Jefferson County to teach school for four or five years. He became interested in the legal profession and while teaching studied law. In 1893 he applied to the Circuit Court in Jefferson City for a license to practice law and this license was issued upon the order of Judge J.G. Green after the applicant had passed the examination. He was admitted to the bar in that county.

He moved in 1895 from Jefferson to Scott County, taking up his residence at Benton and establishing a law office there. He worked for a while in the offices of the county clerk and county collector, and in 1898 he was a candidate for prosecuting attorney of Scott County, his first political venture, and was elected. He was subsequently elected in 1900, 1902 and 1904.

He was married Sept. 5, 1899, to ... Mary (Pobst) Kuehnert of Benton, and the couple moved to Cape Girardeau in 1906 and Judge Kelly opened a law office in the old Sturdivant Bank building. He worked from this office for four years and in 1910 M.E. Leming, upon being elected mayor, named Judge Kelly as city counselor.

In November 1912 Judge Kelly was elected to the Circuit Court, succeeding the late Judge C.B. Faris, who had resigned to go on the State Supreme Court. At that time the district embraced not only Cape, Scott and Mississippi counties, but also New Madrid and Pemiscot counties. He was re-elected in 1916, 1922, 1928 and 1934, his term expiring in 1941. Since then he had devoted himself to the practice of law in the city.

While residing at Benton Judge Kelly was a member and president of the school board and was active in the Methodist Church. Since residing in Cape Girardeau he had been one of the active members of Centenary Church.

He had been a member of the board of stewards, was chairman of the church's official board for a number of years, and served on he building committee. He taught the Men's Class for many years and also taught a women's class.

He is survived by his wife, a son, Emmett Kelly, a member of the news staff of The Missourian; a daughter, Miss Clara Kelly, a teacher at Ypsilanti, Michigan, who is here; two brothers, Charles Kelly of Anna, Illinois, and Thomas Kelly of St. Louis, and two grandchildren, Robert Emmett and Martha Kelly.

A formal resolution was passed at a meeting of the Cape County Bar Association Tuesday expressing regret that Judge Kelly was not able to attend the meeting.

The next day, the newspaper carried glowing tributes to the late jurist.

His Ability, Honesty and Integrity Cited by Lawyers Familiar With His Long Legal Service

From lawyers who had served his courts during the 28 years he was on the bench in this judicial circuit came praise today for the legal and judicial career of Judge Frank Kelly, who passed away Wednesday morning.

His ability, his integrity, his honesty and his absolute fairness in the conduct of his court were lauded in tributes by attorneys. Among the tributes were these:

"Judge Kelly was the second circuit judge before whom I have been privileged to practice, as he went on the bench soon after my admission to the bar. I have always been impressed with his sincerity and fairness while on the bench. He had the rare courage to acknowledge it when he was shown to have committed error, and promptly took the necessary action to make correction. His decisions and rulings were never, to my knowledge, based on political or any other selfish expediency. Judge Kelly made and outstanding judicial and professional record," said Judge J. Henry Caruthers of Common Pleas Court.

"Judge Kelly was an interesting person. He was sincere and capable. When on the bench he often was called to other counties to serve as a special judge. He was appointed to the Circuit Court when Judge C.B Faris was made a Federal Court judge. Judge Kelly tried many cases in his career as a judge he worked hard on them and was always interested in doing what he believed to be right. He would make changes to correct any decision he decided was wrong, and could be firm with both sides in a law suit," said former Judge Lee L. Bowman.

"Judge Frank Kelly possessed in he highest degree that most fundamental of all attributes of success -- integrity. He was honest in his every thought and act. He had a sense of duty that was inherent. He may have made some mistakes -- for who among us has not -- but Judge Kelly never made one intentionally.

"He had a sense of humor that was beyond price. He loved to hear or tell a good story. He was a modest man, and leaves behind him a great host of genuine friends. He was loyal to his friends, and to his church.

"To few men in the history of Missouri has been acco0rded the honor to so long and so honorably serve the people of his judicial circuit as was granted Judge Kelly by the voters of this circuit."

"Judge Kelly served as circuit judge in this judicial district for many years. He made an excellent judge and the decisions, decrees and judgments rendered by him were (predicated) solely upon his honest and impartial convictions, and in harmony with the law as he interpreted it. He was a positive character," said Judge O.A. Knehans

"Judge Kelly had a very high conception of right and wrong. His judgment and interpretation of the law was good. During his 28 years on the bench, he made some mistakes, but they were all errors of the head and not of the heart. He was absolutely honest and, in all his rulings and findings in court, the lawyers always knew that they were the result of an earnest, conscientious and careful interpretation of the law as he saw it. Judge Kelly was recognized by the members of the bar as one of the outstanding jurists of the state," said Albert M. Spradling, an attorney.

From the Bar Association

On Dec. 3, 1940, the Cape County Bar Association adopted a resolution calling attention to9 Judge Kelly's brilliant legal career and his service to the people. The resolution said in part:

"Judge Frank Kelly was a good lawyer and made a splendid judge. He was always honest and impartial in all matters presented to him. Members of the bar frequently charged him with being incorrect in his conclusions of law and fact, but no one ever said that he was dishonest or impartial to or against any litigant. Judge Kelly was courageous. He never had his ear to the ground for the purpose of ascertaining what the people might have said about his decisions. During his career as a circuit judge a number of important cases arose in which he was required to decide contrary to the popular feeling and wish of the people. In one case he was required to make a decision just prior to a general election in which he was a candidate to succeed himself. He knew that his decision would be unpopular and likely result in the loss of a lot of votes. However, he had given the question involved careful consideration. There was no doubt in his mind about the law, and that being true, there was only one course for him to follow and that was to decide the case according to the law as he saw it, and he did so. His decision was unpopular and in some parts of the county severely criticized, but later the Supreme Court passed on this question, affirmed the decision and completely justified Judge Kelly in his conception and judgment of the law. The case referred to is just one of many cases that he was required to pass on, which was unpopular with the people, but he felt that he was right and decided the case according to his own best judgement and knowledge of the law. It requires courage to try and decide a case contrary to the popular ideas of the people. No one but a fearless and courageous judge will do it but Judge Kelly was fearless and had the courage to do what he thought was right.

"Judge Kelly, while on the bench, had many commendable traits. He was dominated by the idea of properly trying and correctly reaching a result justified by the law and the facts. If he reached an incorrect result, and it was shown to him, he was the first to desire a correction. He never tried to justify a mistake or an unjust conclusion. Pride often prevents a judge from admitting his mistakes. It was not so with Judge Kelly. He took as much pride in correcting a mistake as he did in deciding a case correctly." 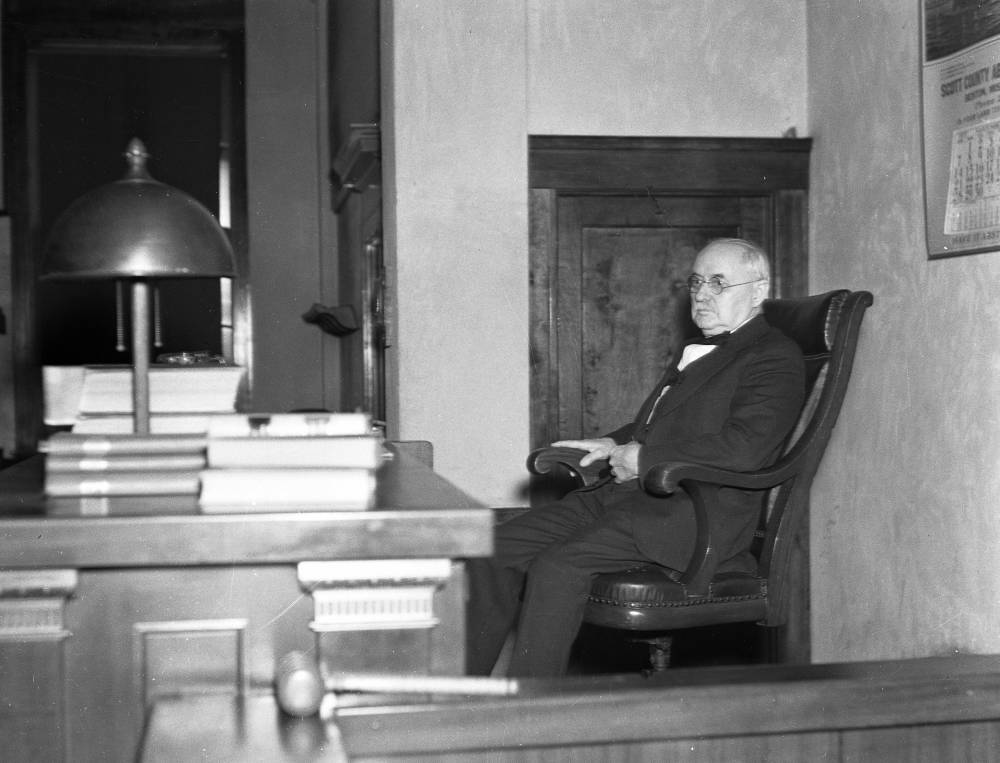