In early December 1918, the Spanish influenza epidemic, which had been waning in Cape Girardeau, came back in full force.

Mayor H.H. Haas wanted to impose strict restrictions on gatherings in the city, in an effort to control the spread of the disease, but he was fought by both businessmen and school officials. A previous ban had proven costly to the commercial life of the city and had kept children from their studies.

In the end, however, faced with a growing number of flu cases, Haas prevailed, and he ordered a strict ban. This is the proclamation printed in The Southeast Missourian that gives the details of the ban. 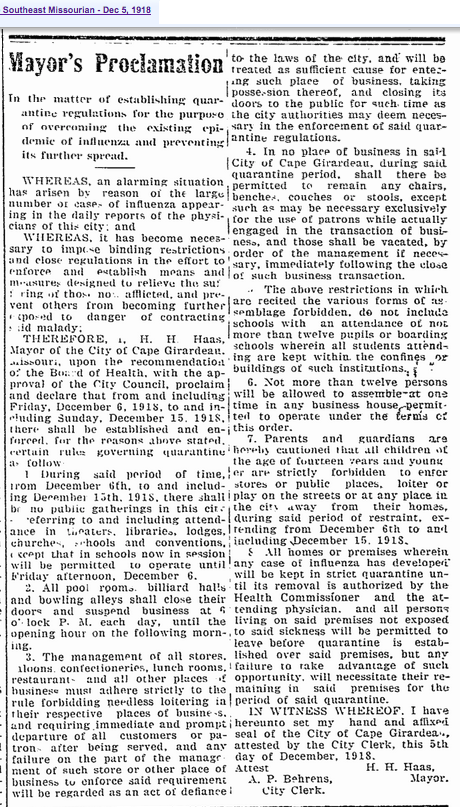 An article accompanying the proclamation further stated, "Restrictions will also be placed on stores, saloons, butcher shops and all other business houses forbidding any loitering whatever and allowing only a few people in the building at a time. This will be enforced to a letter (by) special policemen... A police officer will visit every 15 minutes and if any of the rules are violated the place of business will be closed tight till the ban is lifted..."

The ban, which was to have been lifted Dec. 15, was extended another five days by Mayor Haas. On Dec. 14 the city counted 244 residents ill with influenza. The ban was again extended on Dec. 20 to the 27th, but some restrictions were modified to allow adults to attend Christmas Day religious services. Children under 14, however, were restricted from attending. No Christmas parties were held here in 1918, because of the ban.

Finally, the restrictions were lifted at midnight on Dec. 27, allowing shoppers to shop and children to once more attend church services and classes. The lifting of the ban also came just in time for New Year's revelries.

A Missourian editorial the following day expressed the town's relief and the hope another ban would not be necessary.

LET'S KEEP THE BAN OFF

The influenza ban in Cape Girardeau has been lifted. For most of the past two months drastic measures have been taken by the city authorities in fighting the epidemic. In spite of all precautions and good work on the part of the mayor, city commissioners, health board, health commissioner and the physicians of the community there have been many deaths from influenza and pneumonia. If drastic measures had not been taken the mortality would have been greater.

The ban placed by the city authorities has been irksome. The curtailment of activities has worked a hardship but the citizens have been patient and for the most part have cooperated in the fight against the epidemic.

If the families afflicted with influenza will be careful to keep away from others they will assist in eliminating the epidemic. If they are careless it will be only a short time until the ban must be put in force once more. It is up to the citizenship individually to keep things open in Cape Girardeau.

There should be no selfishness displayed. If one has symptoms of influenza he should keep away from others and under no circumstances should attend a show, church services or any other gathering until all danger is past.

The city authorities deserve the gratitude of all for their work in handling the situation. They have realized the injury to business and the disagreeable features of the restrictions used, but they have done their duty throughout the entire period. It now remains for the rest of us to do our duty in order that drastic measures may not again become necessary.