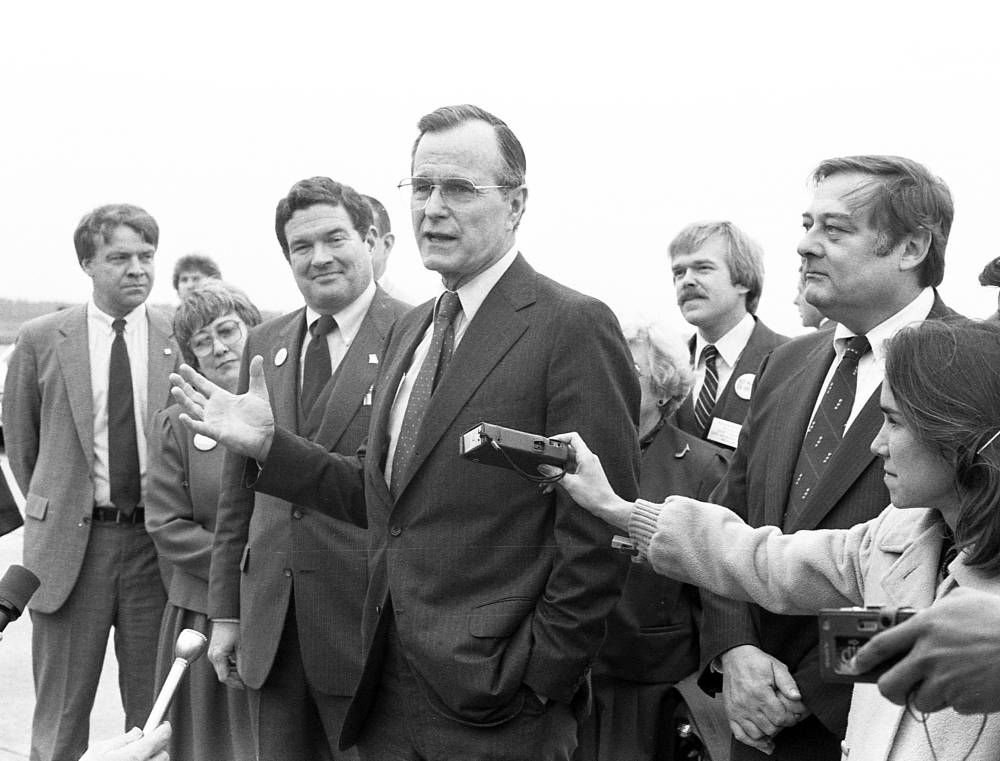 Vice President George Bush answered a few questions from the news media upon his arrival at the Cape Girardeau Municipal Airport on the morning of Oct. 22, 1984. Gov. Kit Bond is standing at Bush's right. Behind him, from left to right, are Mary Kasten, Kevin Phillips and U.S. Rep. Bill Emerson. (Southeast Missourian archive)

Last week, the nation mourned the death of the 41st president of the United States of America, George H.W. Bush.

Back on Oct. 22, 1984, when he was vying for a second term as vice president in the Ronald Reagan administration, he was simply "George Bush." There was no need then to differentiate him from his son and future president.

The Missourian carried two stories that day about Bush's visit, along with a full page of photos. 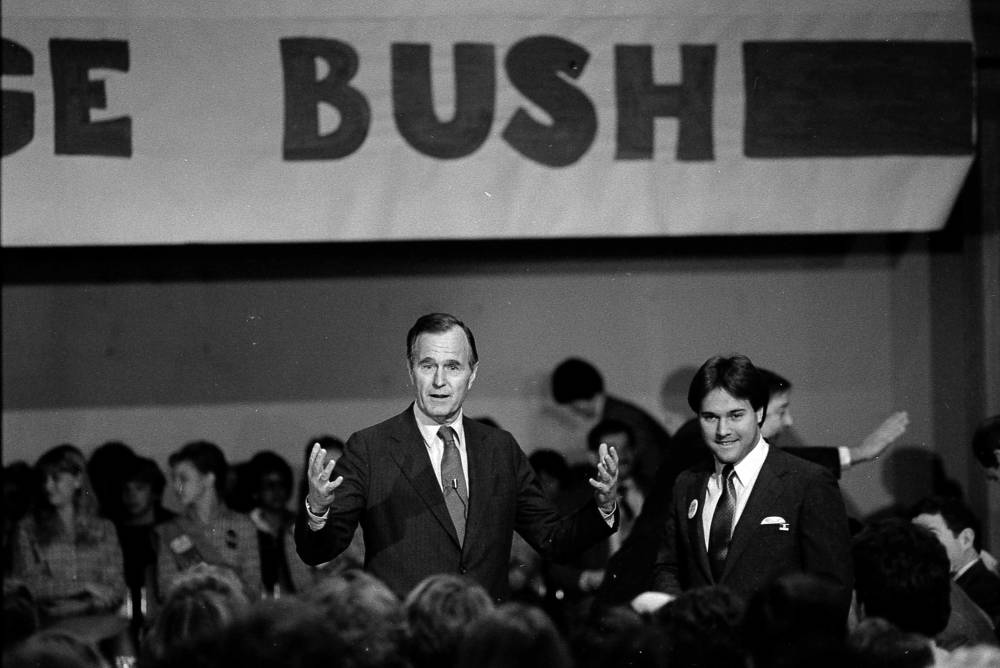 "I know you want an objective evaluation of what happened last night... He did (to Walter Mondale) what the (football) Cardinals did to the (Washington) Redskins and by a wider margin," the vice president declared to a thunderous ovation. (The football Cardinals edged the Redskins 26-24 on the same day as the debate. - Sharon)

About 600 people crowded into the ballroom at the University Center, amid tight security, for what was billed as an "Ask George Bush" session, a chance for the public to ask the vice president questions.

An overflow crowd of about 200 to 300 persons watched the event on a television monitor in the University Center lounge. 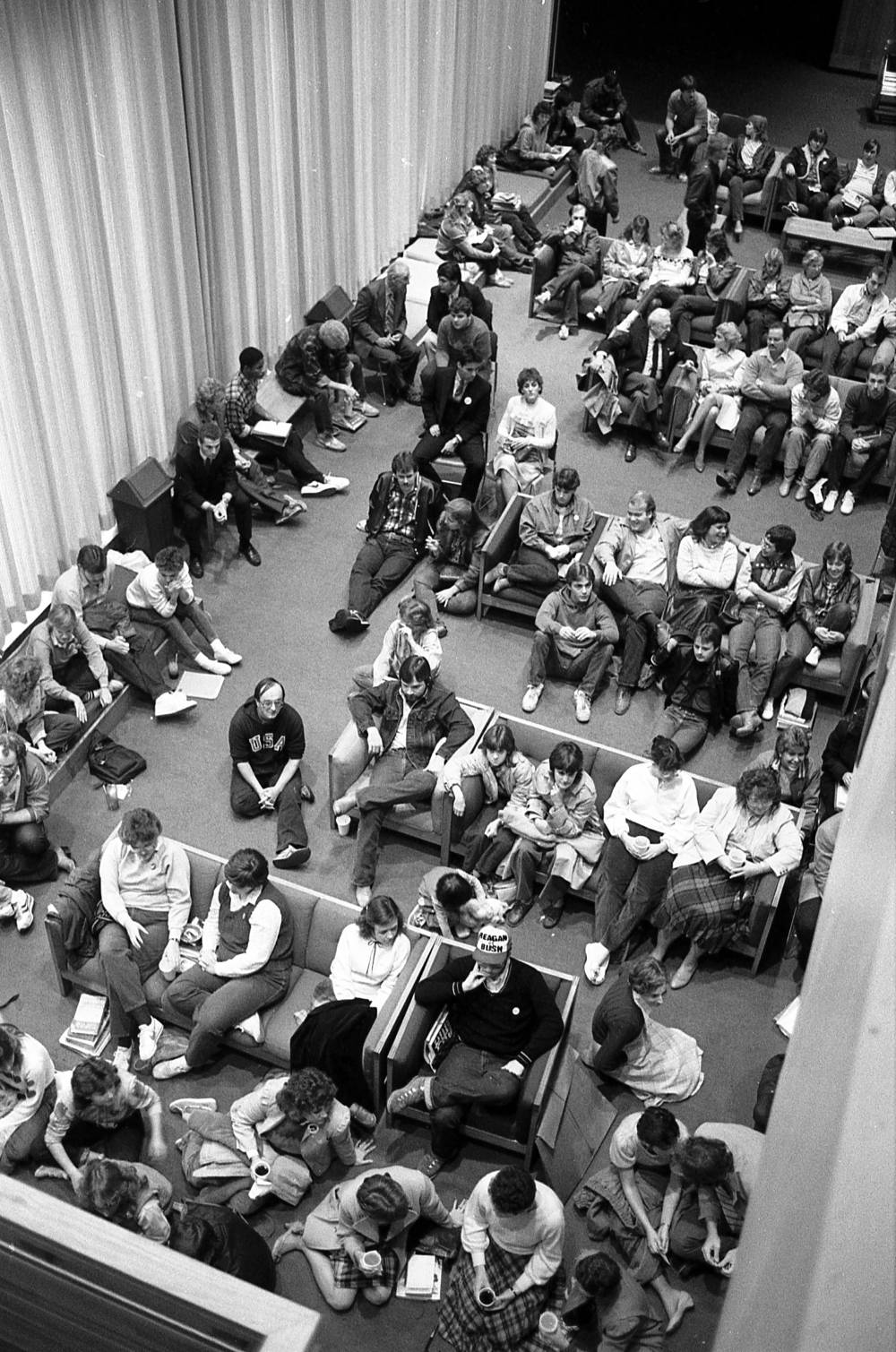 This is part of the overflow crowd that watched Vice President Bush's visit on a television monitor one floor below the University Center ballroom. (Southeast Missourian archive)

A smiling Bush maintained that "the president came through as a strong leader" in control of the facts.

"Nobody has accused us of being weak," the vice president noted.

Bush and his entourage flew into the Cape Girardeau Municipal Airport, arriving just about 8:40 this morning. The Bush motorcade left almost immediately for the university campus.

Throughout the 40-minute session, which began shortly after 9 a.m., Bush repeatedly stressed that the nation is better off today than it was during the Carter-Mondale years.

"We started from the days of weakness and vacillation" during the Carter years when there were 21 percent interest rates, Bush pointed out.

Since Reagan took office, interest rates are down substantially and inflation is now running about 4 percent a year.

In answer to a question about the so-called "liberal bias" of the press, Bush quipped that the "good thing" about Sunday night's presidential debate was that "it went right from the debate to the football game (on ABC)," which left no chance for that network to analyze the debate.

"The American people are not dumb. They don't need to get it through a filter," he stated to a roar of applause.

Bush insisted that he and Reagan are "on a roll" now in the presidential campaign with the election only two weeks away.

Asked how Reagan would have finished his closing remarks had he had time to do so in the televised debate from Kansas City, Bush said the president would have stressed the need to reduce tensions between the United States and the Soviet Union.

"Our whole program has been to reduce nuclear weapons through a verifiable method," state Bush, declaring that the administration care about preserving peace. 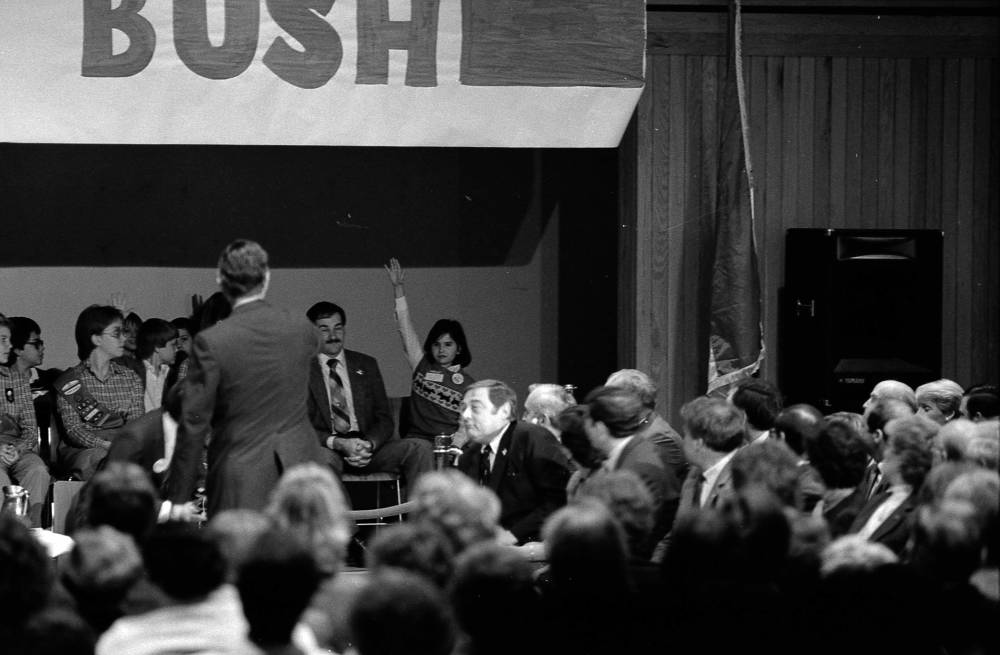 The youngest questioner was 10-year-old Carrie Peterman, a student at Alma Schrader school, who asked whether the vice president favored voluntary prayer in public schools.

"We do believe in the separation of church and state. Our position is that prayer should not be banned from the public school.

"The United States Senate opens with prayer and as president of the Senate, I can tell you they need to open with prayer," remarked Bush.

In answer to a question about the need to balance the federal budget, Bush attacked the Mondale tax plan, saying the Democratic politicians are "running for cover" because they do not support Mondale's tax plan.

The Reagan administration, Bush said, wants to simplify the tax structure, supports the need for a balanced budget amendment, and would like enactment of a measure which would give the president "line item" veto power.

The administration's main emphasis is on "keeping the recovery going," state Bush, arguing that the nation's economic recovery alone can lead to a substantial reduction of the budget deficit. 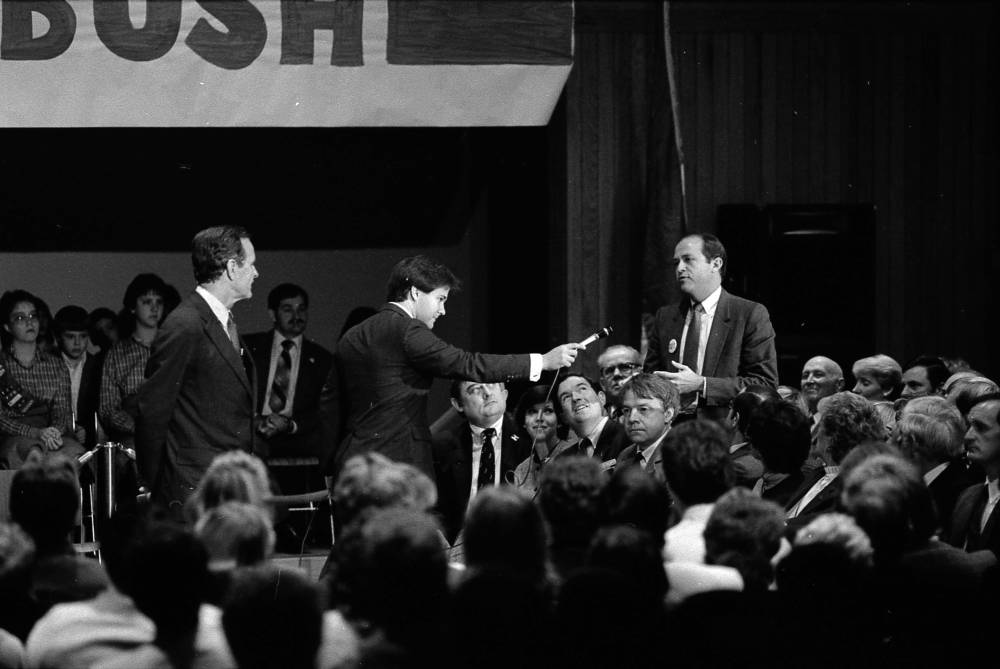 Bush said the Reagan administration supports the rebels in their fight against the Sandinista regime in Nicaragua.

He charged the Sandinistas have"demonstrated a callous disregard of human rights."

Bush claimed there is much more freedom in the Philippines, despite some human rights problems, than in leftist countries like Nicaragua and Vietnam.

In Vietnam, for example, the vice president said "people are setting out in leaky boats to grasp any straw of freedom."

Since Reagan took office, there have been 33 democratic elections in South America, Bush said.

He said the Reagan administration does not believe that "you beat your breasts and slap your friends around" and remain silent on human rights violations in other countries such as Nicaragua and Vietnam.

"We have a more practical approach to human rights and we do consider the Philippines a friend," Bush added.

The Reagan administration has been criticized by some women's groups for its opposition to passage of the Equal Rights Amendment and its stand on women's issues in general.

But, Bush said today that the Reagan administration is "on the right track" in the support and equitable credits for child care and changes in the inheritance tax law which makes it fairer to women.

He maintained grain embargoes are wrong because they only hurt America's farmers.

"Every farmer knows who is going to be retaliated against first," maintained Bush, suggesting that protectionism would only hurt agricultural exports.

In addition to his Q-and-A at the University Center, the vice president also sat down with the editors of the Southeast Missourian and the Bulletin-Journal, Don Gordon and Ken Newton, respectively. Only the Missourian's article about that interview survives in our morgue. 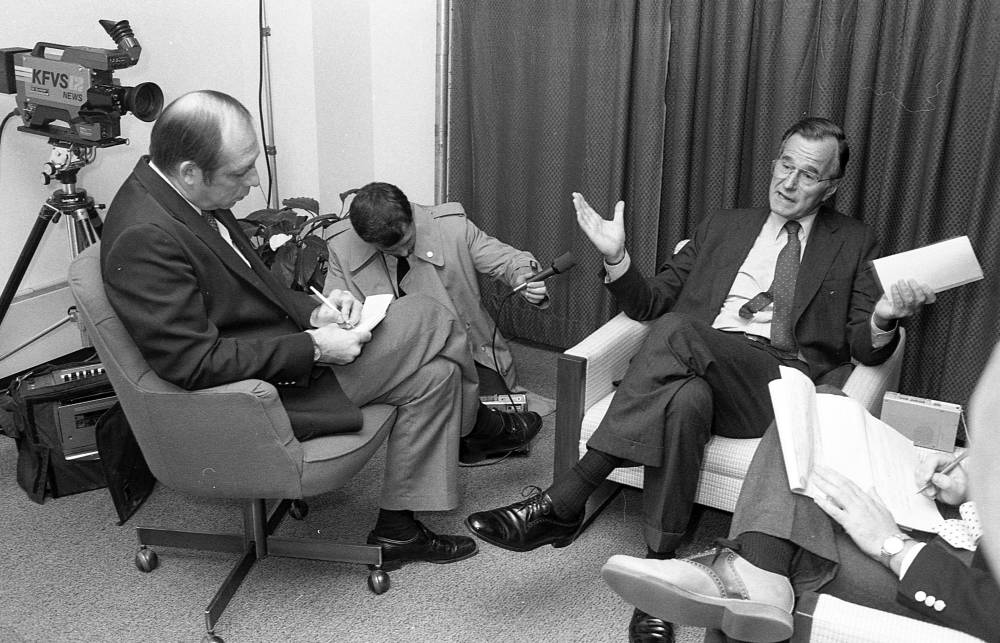 Vice President George Bush, in an interview with the Southeast Missourian this morning, said he doesn't want to discuss his "died in shame" remark further and does not feel he owes anyone an apology.

"I might rethink my position when Walter Mondale apologizes for scaring the senior citizens of this country," the vice president commented.

Bush in his debate with Geraldine Ferraro Oct. 11 suggested that the Democratic opposition believes the servicemen killed in the bombing attack in Beirut a year ago had "died in shame." Mondale called on President Reagan to require an apology from Bush.

"I think the president handled it quite well," said Bush.

Bush in response to a question later in the interview commented again about Mondale and his contention that a Republican administration would threaten Social Security.

"They bring it up every two years and it is blatantly false," said Bush.

Regarding his opposite number on the Democratic ticket, the vice president said, "I try not to respond to Mrs. Ferraro. What determines the election is the top of the ticket. I try to keep my sights on that."

Bush, former director of the Central Intelligence Agency, was asked to react to the current allegations of CIA support of terrorist activity in Central America.

"I learned to be fair and get the facts. There is an awful lot of fiction" surrounding any activity that is as clandestine as the CIA's, said the vice president.

"Mr. Mondale tried to parlay that issue into a cause celebre," Bush remarked. But he said he felt the president's answer on that issue in Sunday night's debate with Mondale was effective.

The vice president, in answer to a question about why Reagan did not mention the Grenadan mission in the foreign policy debate, said the president had been prepared to discuss it but apparently did not have the proper opening to introduce the subject.

"I don't think he shied away from it, because we view it as a demonstrable plus," said Bush of the American invasion of the island last year.

Asked why farmers should support the Reagan-Bush ticket, the vice president had this to say:

"A lot of them don't want to go back to the policies of the past, the Carter-Mondale interest rates. They don't want 12 1/2 percent inflation. They want expanded markets abroad and to participate in the recovery."

Speaking on a general economic theme, Bush said a commitment to a second administration would be to make a major reduction in budget deficits and called for enactment of a balanced budget constitutional amendment which he said would help the process.

"Deficits actually are less now as a percentage of Gross National Product than they were during the 1950s," said Bush.

He also drew a contrast between the basic economic policies of the Reagan administration and its opponents.

He said legislation that was supported by Ms. Ferraro and costing $2.5 billion would have created 300,000 jobs, but that economic growth under Reagan has added 300,000 a month without that federal expenditure.

"What worries me about Mondale is that he would go back to that kind of a make-work approach," said Bush.

The vice president was asked to comment on the Democratic allegation that a Republican platform plank would impose a religious or pro-life test on all future federal judge appointments.

I think the test is 'respect for human life' which is very broad. They have gone after Mr. Falwell (conservative evangelist Jerry Falwell) when in fact he opposed the president's only appointment to the Supreme Court, Sandra Day O'Connor," said Bush.

Here are a few other photographs taken at the Q&A session, as well as the one-0n-one interview with Bush afterward. 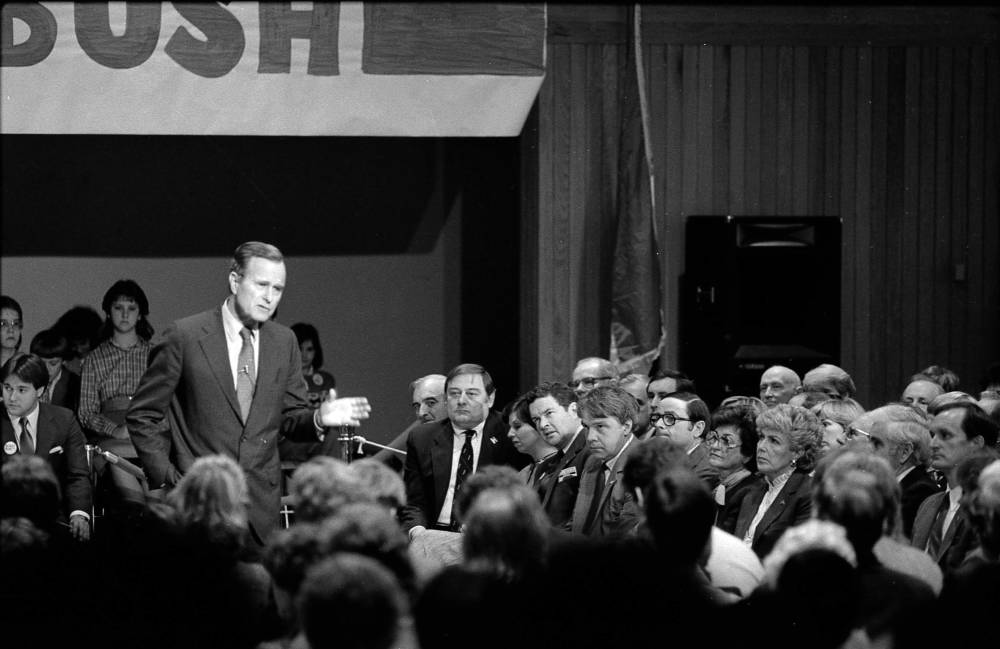 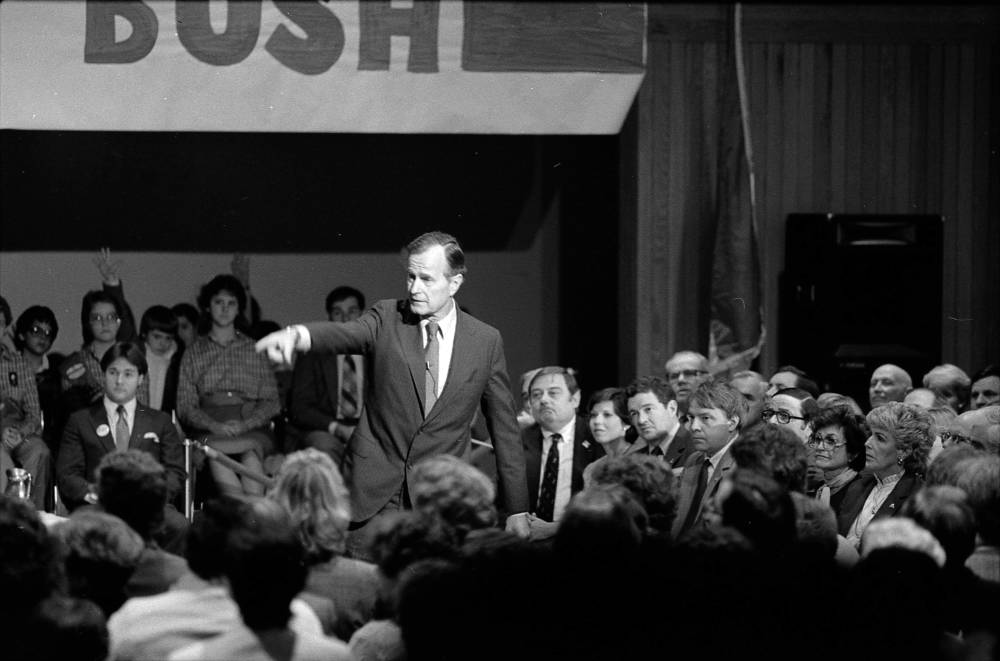 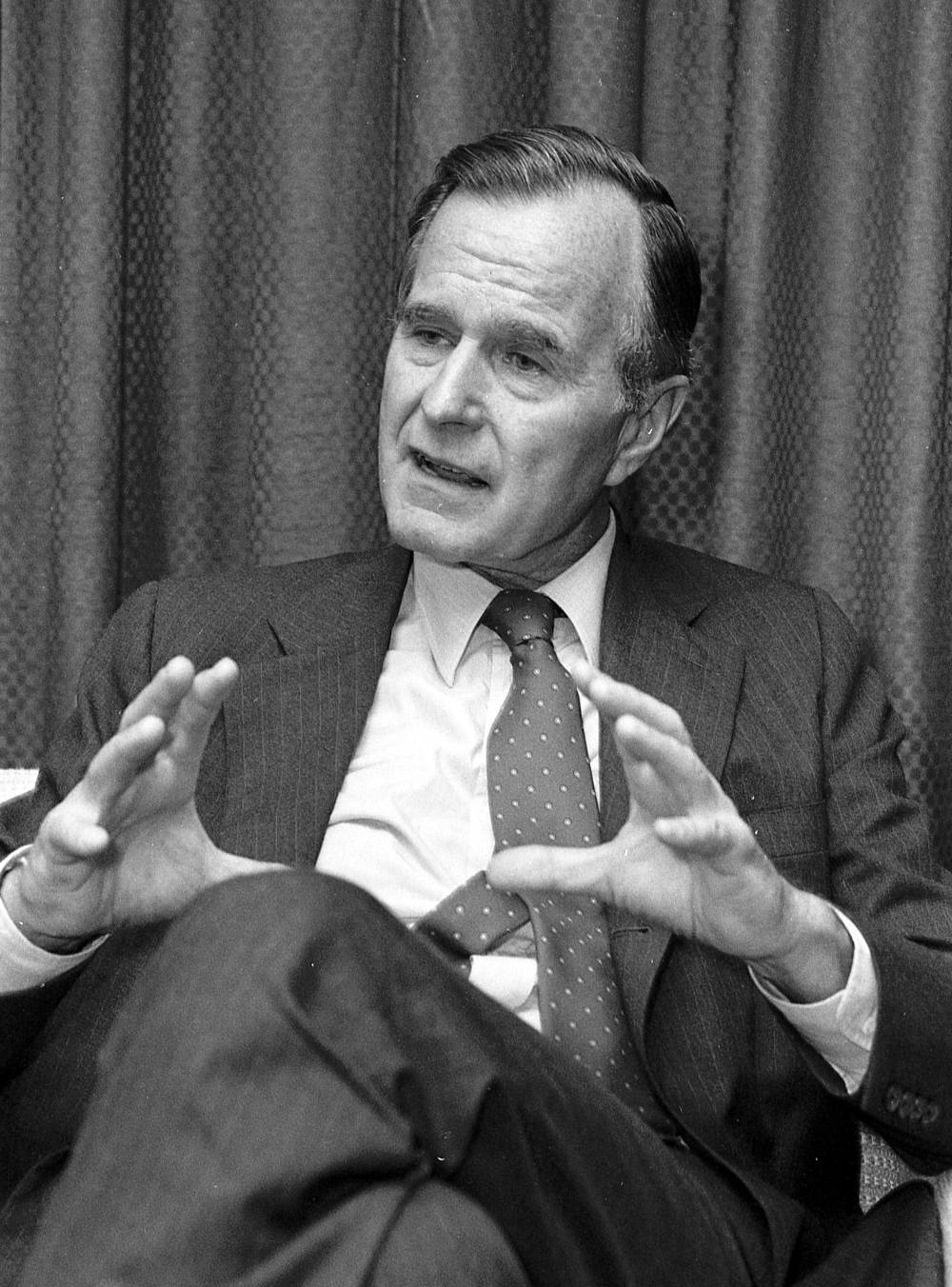 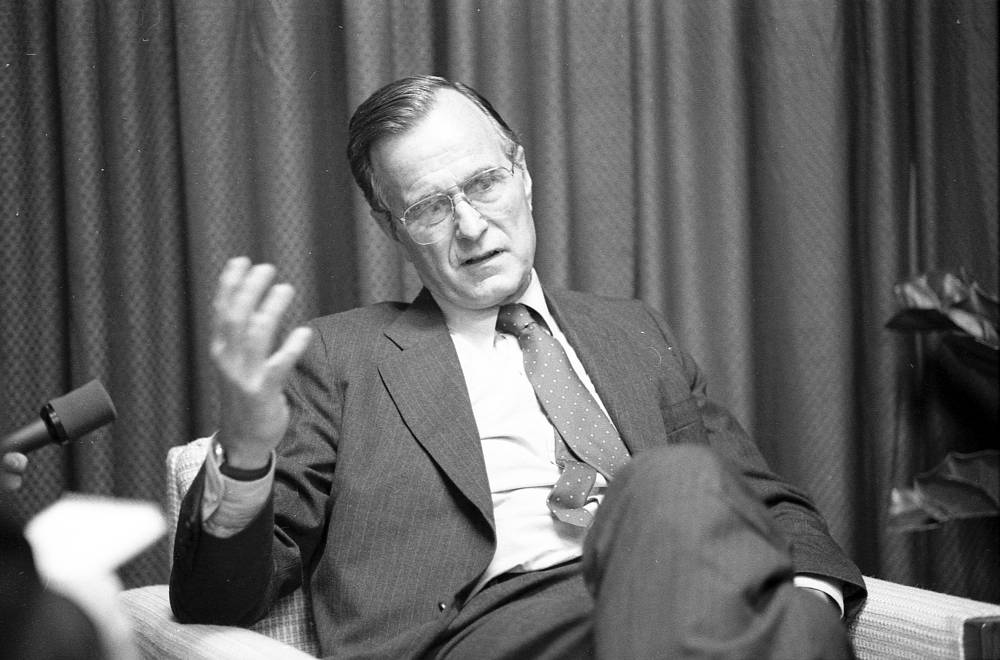 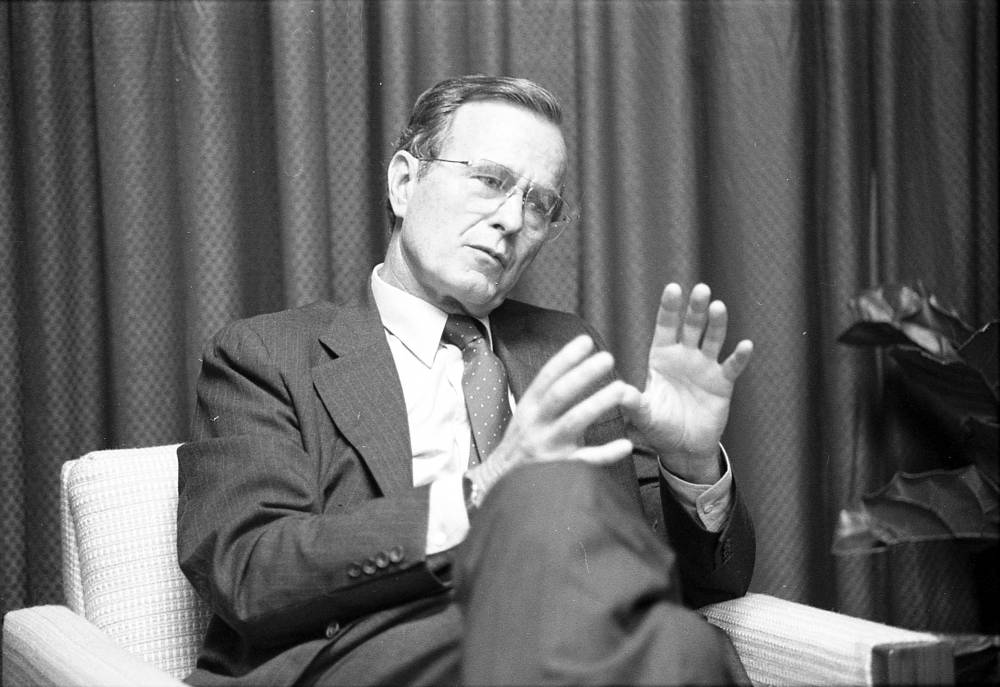