And the Lord spake unto Moses, saying... And they shall make an ark of shittim wood: two cubits and a half shall be the length thereof, and a cubit and a half the breadth thereof, and a cubit and a half the height thereof. And thou shalt overlay it with pure gold, within and without shall thou overlay it, and shall make upon it a crown of gold round about... And thou shalt put into the ark the testimony which I shall give thee... (Exodus 25: 1, 10-11, 14)

I think it's safe to say, I have never begun a blog with a Bible quote before. But given the story I'm going to bring to you, I thought it appropriate.

Old Lorimier Cemetery has thousands of tales to tell. However, today I'm only interested in the one about Frederick and Frances "Fannie" Daues and the loving devotion of their sons.

Frederick, a cooper, was born in Germany in about 1828, while Fannie was born in about 1840 in Austria or Bohemia, depending upon which records you use. Her maiden name is also difficult to determine, as it was spelled a variety of ways in historic documents: Hedmanek, Hetmaneck, Heitnek, Hetmaneck, etc. We don't know when either immigrated to the United States. (But Ancestry.com does show the arrival of a 12-year-old Franziska Hettmaneck with her family at the Port of New Orleans on May 13, 1854. The document says the family intended to settle in St. Louis.)

Ferdinand M. Daues (born 1860) first worked as a butcher, but later he was a "skilled workman" employed by Roth Tobacco Co., in Cape Girardeau. (Perhaps he was a cooper, like his father.) Ferdinand died in 1922 from injuries he received at the company plant, when a hogshead of tobacco fell from a truck he was helping to unload. It struck Daues in the chest, knocking him violently to the ground. A story about the incident in The Southeast Missourian says, "His right hip was seriously injured, besides receiving internal injuries, which caused his death." Also contributing to his death, according to his death certificate, was pneumonia.

The last son of Frederick and Fannie was Charles H. Daues (born 1878). He was a lawyer, who served as prosecuting attorney in Cape Girardeau County. The law-and-order Daues apparently made some enemies as prosecutor and failed to win re-election to that office. He then moved to St. Louis, where he was the city counselor under Mayor Henry Kiel, his cousin. Later, he was elected presiding judge of the St. Louis Court of Appeals.

The Daues parents died just months apart, Fannie on April 20, 1905, and Frederick on Oct. 16, 1905. They were interred in the Catholic section of Old Lorimier Cemetery. Ten years later, the four contractor sons journeyed back to their home town of Cape Girardeau from St. Louis to honor their parents, erecting a brick mausoleum over their graves. A newspaper story at the time describes the mausoleum as "designed after the style of the Ark of the Covenant."

It takes some imagination to see the Ark in this structure, but I'll let you judge for yourself. 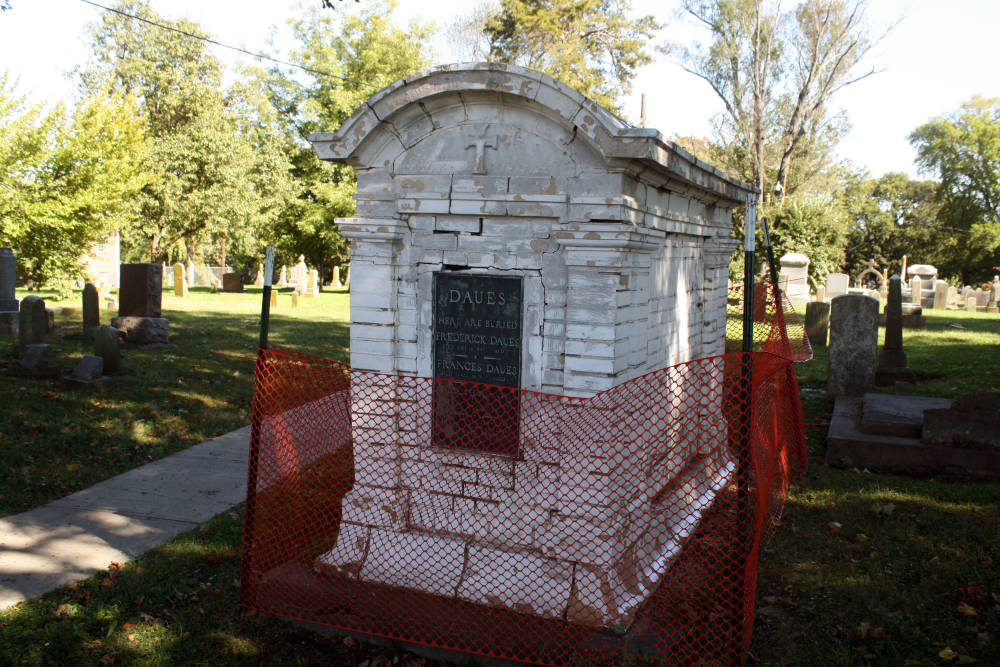 Last week a wonderfully beautiful and inspiring mausoleum was placed over the grave lot of the late Frederick Daues and his consort, who died 10 years ago, the wife in the spring and the husband in the fall of 1905.

Four brothers, sons of the well-known citizens, came down from St. Louis last week in their motor, the material for the mausoleum having been sent ahead by freight. Being contractors they set about building the monument themselves, employing laborers for the rougher work. But for them it was a work of love to the memory of parents that a decade fails to erase.

The monument stands just inside the North Street gate of the old Catholic cemetery in the north central part of the city, on those bluffs overlooking the river. It is long and narrow and designed after the style of the Ark of the Covenant. That architect, Victor Kluto, who drew the plans for St. Francis Hospital, gave the Daues brothers the plan for the monument. It is of white terra cotta brick and white cement joints. In front a brass plate containing the names of the departed spirits will be placed later.

Today Charles H. Daues of St. Louis came down and paid a visit to the tomb. 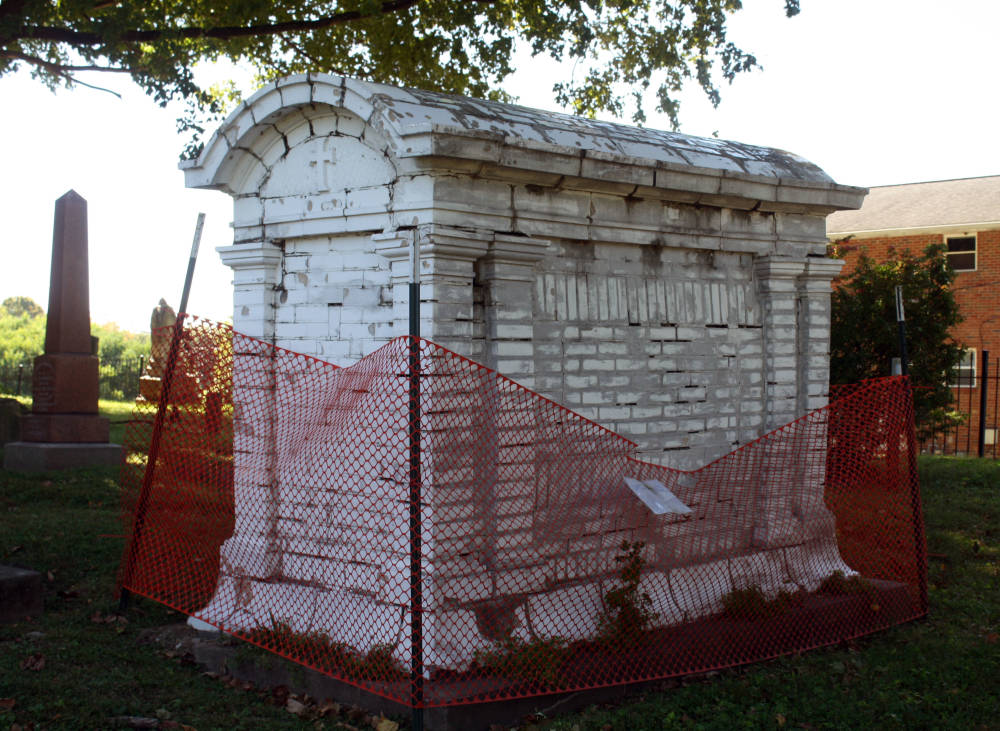 Big Sis and I had some trouble taking accurate measurements because of the temporary fencing that surrounds the structure, put in place, no doubt, by cemetery workers hoping to keep people from damaging it... Or it from damaging people. As you can see from these photos, the mausoleum's condition is poor, with a marked bow in the north wall.

I fear, if measures aren't taken to strengthen this "ark" or even rebuild it, the Daues brothers' unique tribute to their parents may be lost in a pile of white terra cotta bricks.