While I was never a Girl Scout, I can appreciate the efforts supporters are making to retain Camp Cherokee Ridge as a resident Girl Scout camp. Members of the board of directors of Missouri Heartland Girl Scouts voted in September to close the Wayne County camp Dec. 16 and sell the property.

Local Girl Scout leaders question the decision, saying Southeast Missouri was not fairly represented on a task force that examined the council's properties. The task force's report led to board's decision on the camp.

Ten years ago, the council sold off Camp Sacajawea near Cape Girardeau, and it appears Camp Cherokee Ridge may be next.

Given the battle being waged to save the camp, I thought a look at the initial efforts to purchase Cherokee Ridge might be in order. Here's what I found.

Published in the Southeast Missourian, April 27, 1966: 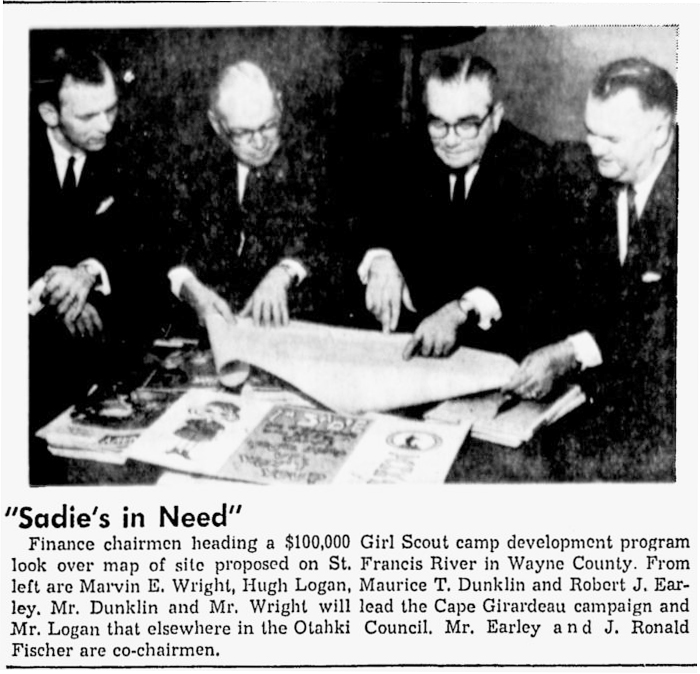 The program will be keyed to the theme, "Sadie's in Need," a sort of distress signal for 2,000 young "Sadies" in the two-state area who are registered council members.

Located on the upper reaches of the St. Francis River in Wayne County, the site has been described as ideal for the purpose by those who have conducted and extensive search for a camp site.

The proposed Otahki Council camp location fronts two miles on the St. Francis and across the river just north of Camp Lewallen, the Southeast Missouri Council Boy Scout Camp. Sam A. Baker State Park borders the acreage on the west.

The property is owned by Mr. and Mrs. Bruce Barnes, who have purchased small adjoining farms over a period of 25 years to build up the acreage.

Their plan has been to build the site into a public recreation area, and they have agreed to sell to the Otahki Council only if the entire acreage is incorporated into the proposed camp.

Mrs. Paul J. Spitzmiller, council executive director, said the site is ideally suited for the purpose. She pointed out that both privacy and security are need in a camp for girls.

This comes, Mrs. Spitzmiller said, by the Boy Scout camp nearby and the state park adjacent. Neither of these can be converted to commercial use and both are well supervised, providing the security that is necessary.

Counties in the council are Cape, Perry, Bollinger, Wayne, Reynolds, and parts of Scott and Stoddard in Missouri and Pulaski, Union and Alexander in Illinois.

The fund drive will continue through May. Letters are being sent to families of Girl Scouts, to individuals and to businesses interested in Girl Scouting. Those receiving pledge cards will find they may take as long as five years to pay off their pledges.

The finance committee is headed in the Cape Girardeau group by Chairmen Maurice T. Dunklin and Marvin E. Wright. Co-chairmen under them are J. Ronald Fischer and Robert J. Earley. These two will have majors and these majors are to select captains with the captains obtaining regular solicitors. Majors under Mr. Fischer are E.C. Younghouse, Richard D. Jones and Clarence Lee Shirrell. Mr. Easley has four majors: Frank M. Casey, George A. Penzel, Noel J. Fischer and August W. Birk.

J. Hugh Logan is to recruit chairmen in outside communities. Mrs. Hal B. Lehman, Mrs. Harry F. Bertrand and Mrs. Dan B. Cotner will call on families of Girl Scouts. The committee also will personally contact those who sent letters.

Mr. and Mrs. Earl S. Mackey are to appear before service clubs and civic organizations to show films of the camp and tell the need for funds.

Contributions of any amount will be accepted, it was announced...

That front-page story was followed the next day by an editorial.

Published in the Southeast Missourian, April 28, 1966:

One of the joys of childhood is the outdoor life -- the chirp of a cricket, the song of a bird, the buzz of a been the wonder of plants, clouds against a blue sky, coolness of shade on a hot summer day.

Remember how it was?

Today, as urbanization continues at an ever increasing pace, there will be many children who will not know unless those adults who remember are willing to make it possible.

Yesterday the Otahki Girl Scout Council -- named for a Cherokee princess who died in Cape County on the infamous Trail of Tears forced march -- announced a campaign for $100,000 to purchase 1,100 acres of ground on the St. Francis River in Wayne County for a permanent camp.

This campaign will be carried out in a 10-county area of Southeast Missouri and Southern Illinois where the Otahki Council reaches to provide the girl scouting program.

It is a campaign that deserves the wholehearted support of every adult in the 10 counties.

The Girl Scouts of this area have never asked for very much. They have conducted their necessary fund raising campaigns, yes. They have held their Girl Scout cooky sales and Hamburger Days. But they have never really asked for the thousands of people in the two-state area to join in a united effort for a single cause.

We hope that every adult will remember the Girl Scouts and work with those selfless leaders who have volunteered their time and talent to conduct this fund campaign.

Girls need help and supervised recreation just as boys do, and they are deserving of the support that this same area has given through the years to help the program for Boy Scouts.

We recall how the service clubs of Cape Girardeau through the years have rallied around the good causes of the Boy Scout program. Camp Lewallen on the St. Francis River -- a neighbor of the proposed Girl Scout site -- is in large part a testimony to the endeavor and funds supplied by the service clubs of this and other communities and their individual members.

It is to be expected that these men, having helped the boys with substantial contributions will do so individually and collectively as a club to give the Girl Scouts the unstinting support they deserve.

Camping is a delight to any young heart -- and its growth shows to older ones, too. In girl scouting it is planned to supplement the home, the school and the church as part of the overall Girl Scout program. It brings girls of the same age together to share friendships and pleasures and to learn to live with each other harmoniously in a complex society.

It has been said the means of camping are recreational and the ends of camping are educational. At camp, the girls learn to be self-reliant and to handle emergencies. They develop many skills, They learn to appreciate and preserve natural resources. They are taught to be all-around wholesome persons under proper leadership. Girls learn that as individuals they each are important and can contribute something worthwhile.

Scouting offers wonderful opportunities for girls. It has been the means of growth and development of many. But the Southeast Missouri-Southern Illinois area has been handicapped in its program for many years by the lack of a permanent camp. Many girls who could, and would, enjoy scouting have not been brought in because of the inadequate camp facilities.

These are now possible. We urge the support of all adults in this praiseworthy program of youth development.