Military training at the Normal School 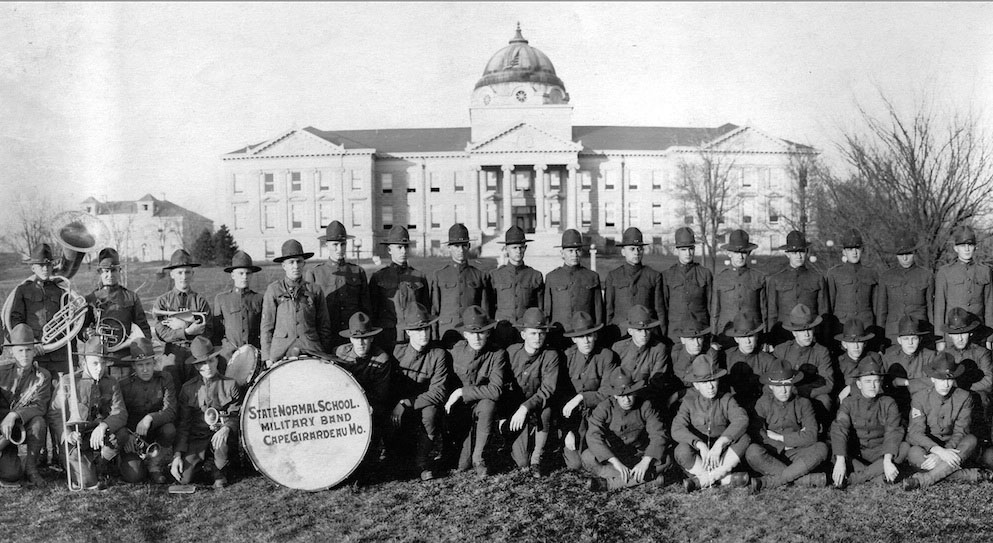 As the First World War in Europe began to inch toward its conclusion, Uncle Sam thought it was a good idea to train young college-going men for military service. On the morning of Oct. 1, 1918, 140 "boys stood at attention on the plaza facing the steps leading to the Normal School... and took the oath of allegiance to the American flag as members of the Student Army Training Corps."

Their training would be brief, as the war ended on Nov. 11, 1918. By Dec. 17, the unit here was disbanded. But those 140 young volunteers got an abbreviated education in the ways of the Army. Housed at Albert Hall, they were subject to military regulations. They were issued Army uniforms, including shoes and an overcoat, and received $30 a month, the pay of a private in the Regular Army. A hospital was established in a rented house at 432 N. Pacific St., with two local doctors and nurses taking care of the S.A.T.C. men.

An article in the Oct. 26, 1918, Southeast Missourian describes the latter.

How Many Springs in a Gun? Guess Again -- What the Boys Are Doing.

"This old 'Fatigue Duty' is well named," said a rookie of the Southeast Missouri Normal School military unit, as he stopped for a minute to pick up a broom straw that was obstructing the driveway up to Academic Hall.

During the rainy weather this week, the boys have not been permitted to become stale, but have been kept busy doing things.

Thursday afternoon those of the first platoon gave the new hospital building and grounds a going-over that transformed it into a place of beauty and of the sanitariest sort of excellence.

Such a scrubbings of floors and furbishing of windows was never seen and the grounds were raked and swept and smoothed until they couldn't be improved on, some surplus trees being cut away and the dead branches from all lopped off.

This work was done under the supervision of Lt. (R.O.) Strickler, who gave the boys some instructions in "ax-craft," showing them which part of the ax was the cutting part and where to take hold of it. They learned rapidly and were encouraged when told the blisters would soon get well and their hands be as good as ever.

Adjoining the hospital is another building that will probably be used as a canteen. To this place Lt. Strickler took the second platoon and told them to "go to it." There was more cutting of limbs and raking of ground, scrubbing of floors and washing of windows until the boys thought they had done a good job, and event the lieutenant passed on their work as fairly good.

But say! You should see the paved driveways leading up to the buildings and the wide boulevards between them. They fairly shine, they are kept so clean. The sweeping of these paved streets is called fatigue duty and is done at odd times, and even at even times, until one sees the results of the labors in immaculately cleaned driveways and walks all about the place.

Of course there has been little regular drilling during the rains this week, but there has been rifle practice and close order drill on the boulevards.

Lt. Strickler has been telling the boys all about a rifle and its uses, with various characteristics and temperamental habits of the army gun. Some of the boys were surprised to be told that each rifle had 80 parts to it and the boys were told to find these parts.

Such a dissection of guns was never seen before in Cape Girardeau. It was like taking the family clock to pieces.

Then along came Capt. (F.H.) Coester to help Lt. Strickler make it harder for the fellows. "How many springs in a gun?" the captain want to know.

The answers varied according to the imagination of the boys. There are nine springs in your rifle," said the captain. "Now find them."

It was like playing "Thimble, thimble, who's to the thimble?" or some other puzzle game, but the boys went after it. One fellow went to the captain with four better. He found 13 springs!

There had been no "flu" at Albert barracks yet, but Sgt. (L.R.) Kimmich threw a scare into the bunch when he got sick and had his meals brought to his room. But the doctor wasn't fooled. It was not the "flu," so Kimmich must get his chow in the mess room again.

Under command of Lt. (C.M.) Young, a squad was sent to Shawneetown Friday to act as an escort and pallbearers for Pvt. (Ben) Wunderlich, who died from pneumonia at a training camp and was brought home for burial.

Capt. Coester, the commandant, has just received notice of the appointment of Dr. (D.H.) Hope as medical officer for the S.A.T.C. with the rank of first lieutenant. He is on duty now as the an whose orders must be obeyed when it comes to physic and doctor's stuff.

The command will meet Sunday morning at 9:30 for its third open air church service. While these services are not compulsory, they are attended by practically the entire command. (The) Rev. (Thomas) Bateman of the Presbyterian church preached at the first service. (The) Rev. (J.J.) Clopton of the Episcopal church at the second. The program for tomorrow will be:

Song, "Faith of Our Fathers, My Faith Looks Up to Thee."

Song, "Father, I Know Thy Ways Are Just," quartet.

All citizens are cordially invited to attend these services.

Three days after the S.A.T.C. unit at the Third District Normal School was demobilized, its members gathered in front of Academic Hall, along with members of the school's military band, for a photograph. The men are unidentified. Enlarged sections of the photo are below. (Kassel Studio ~ Southeast Missourian archive)

Following the swearing-in of the S.A.T.C. members, their names, as well as their officers', were printed in the Southeast Missourian on Oct. 25,1918. Many of the soldiers were from the Cape Girardeau area.

Corps Has 135 Members Under Command of Three United States Officers.

The Student Army Training Corps of the Southeast Missouri Normal School is rapidly developing into a find military organization. There are 135 members of the corps under the command of three regular United States Army officers, who report good work being done by the lads.

The unit was demobilized the evening of Thursday, Dec. 17, 1918, a banquet being the last official function of the S.A.T.C.

The four-course meal, complete with talks by the unit's officers and representatives of the school and music furnished by Professor Kenyon, proved to be somewhat somber, as those attending remembered that one of their number was not with them. Cpl. Eldon T. Hood died the day before at Saint Francis Hospital, "following an operation performed (the previous) Sunday for appendicitis."

A Southeast Missourian article published Dec. 20, 1918, noted, "The entire unit of the training corps accompanied the body to the Frisco passenger station Thursday afternoon, when the body was shipped home, but owing to demobilization taking place today, none of the members could get away to accompany the body home (to Perryville, Missouri)..." 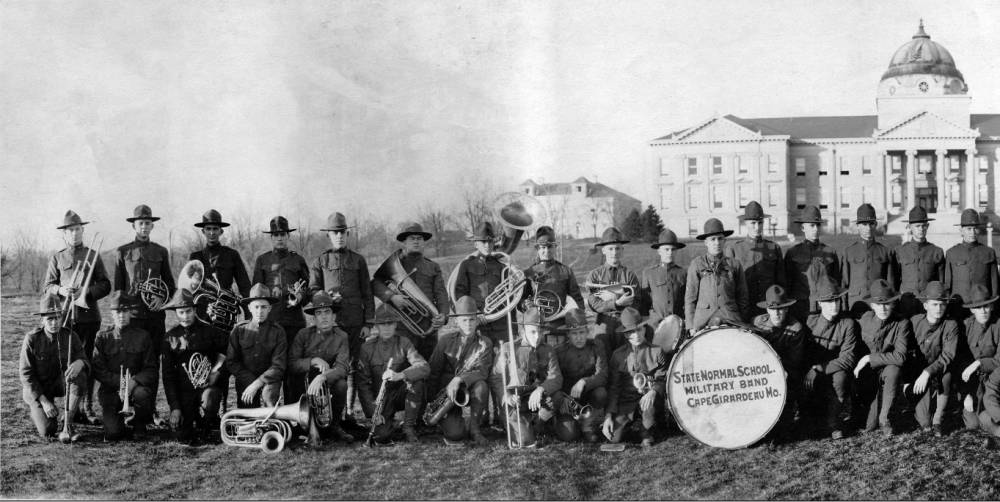 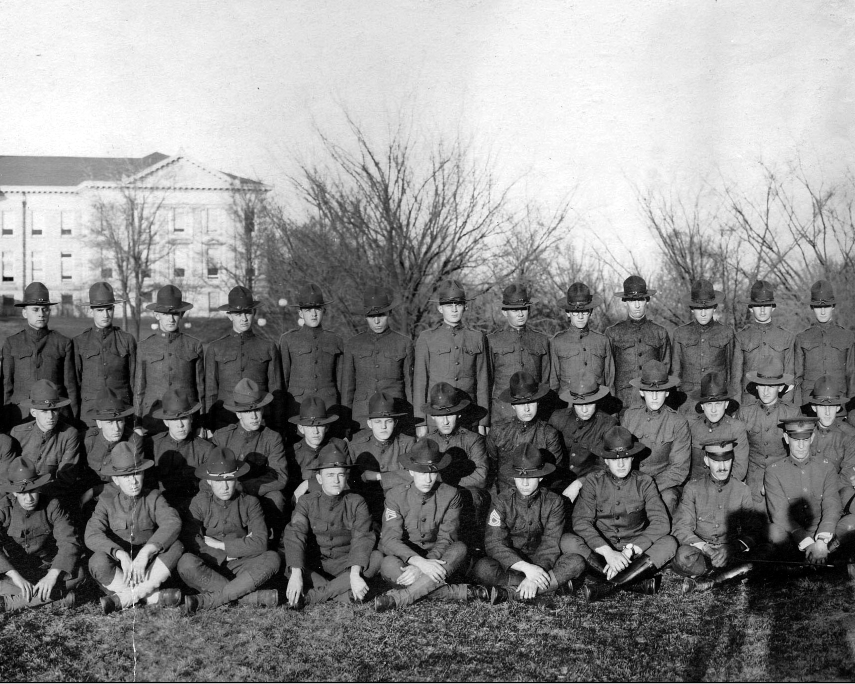 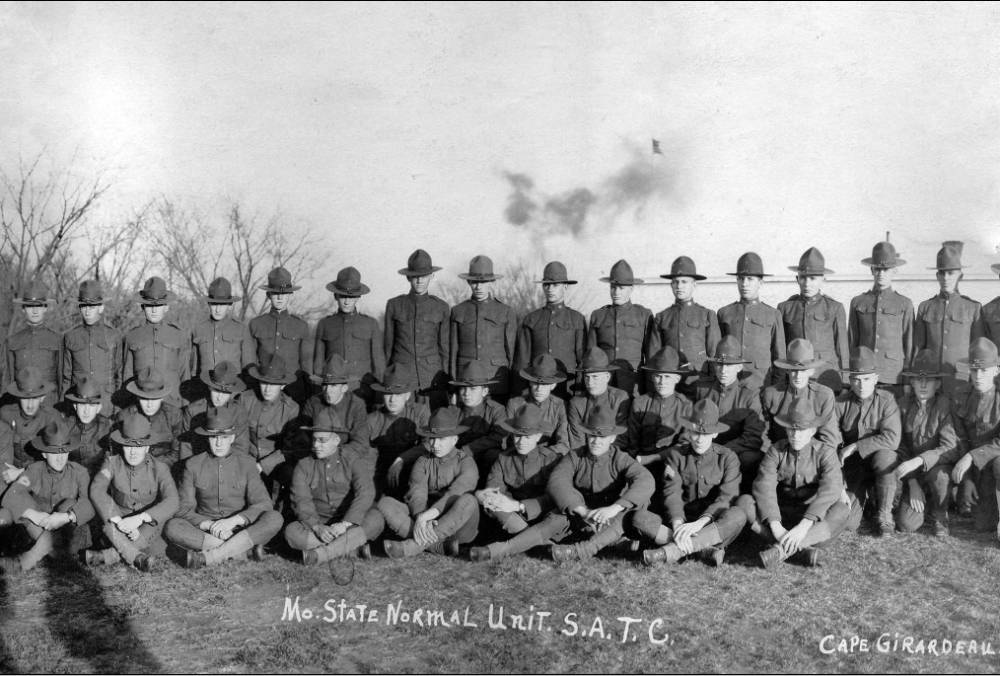 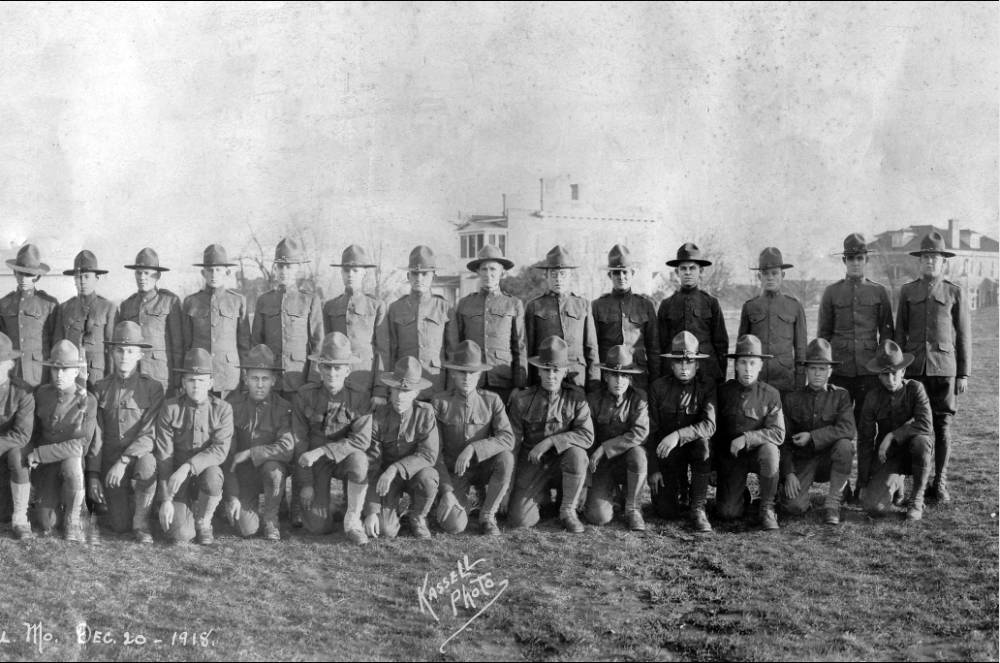