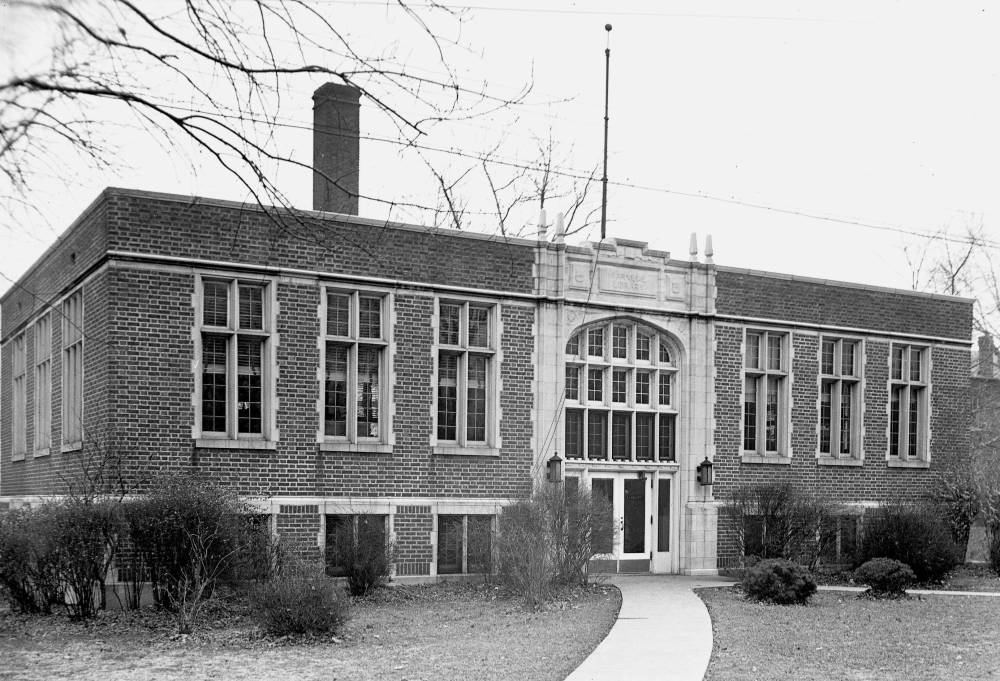 Cape Girardeau's Carnegie library opened its doors in 1922 and served as the public library until a new facility was built on Clark Avenue in 1980. This photograph was taken before the 1959 addition obscured the original appearance of the structure. (G.D. Fronabarger ~ Southeast Missourian archive)

For the first time since 1922, Cape Girardeau’s old Carnegie library is vacant, devoid of activity since county offices were removed from the building at 44 N. Lorimier St., this summer.
Like a giant chess game, the city fathers are debating the future of that historic building, as well as others in downtown Cape Girardeau.
The board of the Cape River Heritage Museum, corner of Independence and Frederick streets, has expressed interest in occupying the former library. And I think it would be a grand fit.
And then there’s Common Pleas Courthouse. It, too, will be vacated when its court offices are moved to a new, 82,000-square-foot courthouse to be constructed in Jackson. Current thinking is that edifice will be completed in March 2020. Common Pleas is THE most historic, public structure in downtown Cape Girardeau. But what will fill its halls and courtroom?
And, finally, there’s Cape Girardeau City Hall. A monument to the imaginative re-purposing of historic structures, it once served as Lorimier School but was transformed into City Hall in the 1970s. Now the structure is filled to capacity, and the city fathers are considering their options with regard to continued use of the old building or construction of a new City Hall.
I suspect there will be lots of debates and arguments before all these issues are sorted out. And I'm sure, not everyone will be happy with the final decisions. But here's my two-cents worth on these issues:
* The historic value of Common Pleas Courthouse is indisputable. It MUST be preserved. It could house some city government offices; it has done so before. And I would love to see the courtroom restored to its original, 1854 appearance.
* I also believe its neighbor, the Carnegie library, should be saved as a historic monument to education and to the women of the city. After all, it was the women of the Wednesday Club whose efforts brought about the establishment of a public library here and who helped raise the money specifically for a Carnegie library. While Cape Girardeau's is not the last library built using a Carnegie grant, it is one of the last constructed for use as a public library, as opposed to a college or university library.
Before its fate is decided, it would be good to review the history of Cape Girardeau’s Carnegie library.

Cape Girardeau's progress through a half century would not be complete without a review of its public library facilities Until 1914 the town was without library facilities, except those afforded by the public schools and the Teachers College, and it wasn't until 1922 that the present public library with its varied collections of books, was provided.

Since 1944 the library has reached and exceeded all minimum standards of the American Library Association, except in income.

Since 1944 it has shown the largest annual circulation of towns 25,000 and under, and has exceeded the annual loans of libraries in many larger cities.

History shows that as early as 1901 an attempt was made to get a library here. Louis Houck offered to provide a public library for Cape Girardeau if the community would vote a tax to support it. The tax issue received a majority vote, but failed to get the necessary two-thirds.

In the fall of 1914 further action was taken when a group of women opened a reading room and small library in the Elks Club building (on Themis Street), the books being secured from local citizens. Miss Helen Coerver, now Mrs. Burwell Fox Jr., was in charge.

This first reading room pointed out the advantages of a library and very soon public interest for establishment of a public library was running high. In 1917 the Wednesday Club discussed the public proposal and proposed a plan for getting aid from the Carnegie Corporation.

World War I then intervened, but late in 1920 the question was again revived in discussions by H.H. Haas, then mayor, and women of the town, and a proposition was submitted by the Carnegie corporation. At first the corporation proposed to send $20,000 here for the building of a library provided the city would raise $10,000. After further negotiations the corporation agreed to give $5,000 more, and it was on this basis the plan was accepted.

In 1922 the council levied a tax for the support of the library. Twenty-five years ago the tax was 5 cents of the $100 valuation. Today it is double that, and the operational budget for 1954-55 will entail expenditures amounting to $20,950.

Ross Lloyd Crigler has been librarian since 1942, and preceding her in the position were Miss Margaret Baugh, Lenore Rafferty Mezger, Eileen Fitzgerald Norman. Others with the current staff are: Mary M. Kempe, Beth Schlue, Dixie Bader and J.F. Seabaugh maintenance man.

Nine trustees appointed by the mayor make up the library board, and they serve for three year terms. Citizens who have served one or more terms as library trustees through its history are: Mrs. A.H. Hinchey, Mrs. J.H. Himmelberger, C.L. Harrison, James A. Kinder, C.J. Neal, John H. Gehrs, Charles A. Himmelberger, the Rev. R. Lehman, the Rev. C.H. Morton, J.B. Carpenter, H.H. Haas, Mrs. Louis B. Houck.

As I said above, I think the old Carnegie library would make a wonderful home for the Cape River Heritage Museum. It would bring back lots of happy memories for those of us who grew up using that facility. But I would suggest that the 1959 front be removed and the library’s appearance be restored to its original Carnegie glory. I’m sorry if you’re attached to the annex, but I’ve always considered it an awkward, ugly appendage. I’d happily swing a sledgehammer to help remove it.
Finally, I’d like to suggest that the current home of the River Heritage Museum should be transformed into a fire department museum. It already houses two antique fire trucks. And it retains its fire pole. It seems like a natural.