Among the thousands of unidentified negatives Garland D. Fronabarger delivered to the Missourian after his retirement in 1986 was one for the image below, which we have teasingly referred to as "Cape's first drive-through cleaner."

Unlike many of its brethren in those tattered, tired old boxes, this photograph was identified as having been published in the Southeast Missourian newspaper on Sept. 21, 1968.

But it wasn't until recently, as I was trolling the 1968 microfilm looking for items for the Out of the Past column, that I located the story that goes with the image, published a day earlier. 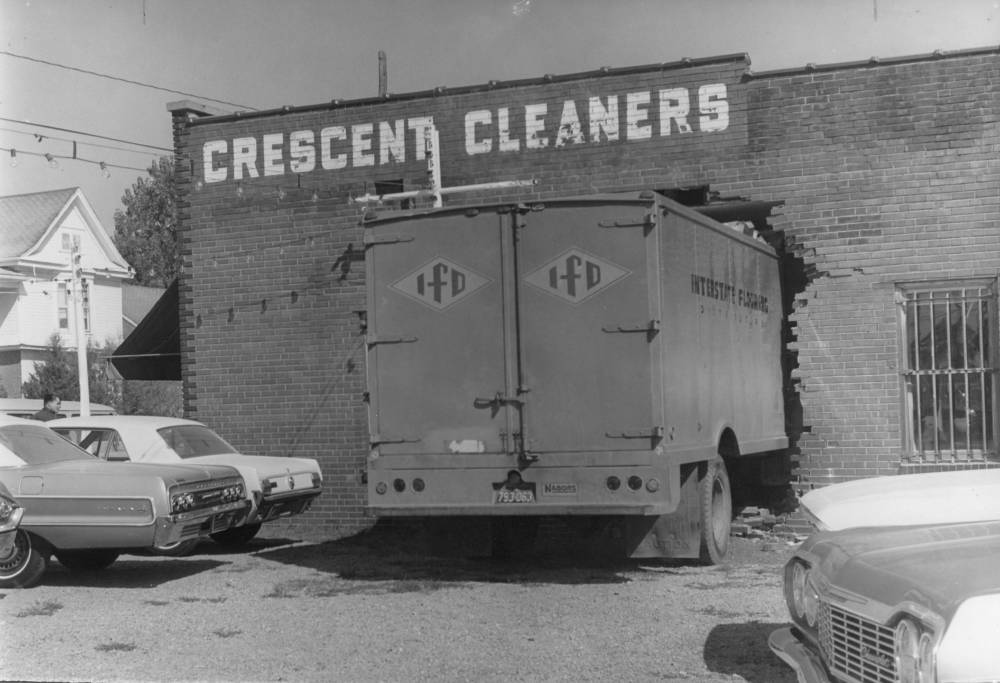 This is the truck which Friday crashed through the side brick wall of the Crescent Cleaners on Sprigg after its brakes failed. The driver maneuvered it through the Sprigg-William intersection, across a service station lot and between two rows of parked used cars, seen here, before hitting the building. (G.D. Fronabarger ~ Southeast Missourian archive)

TRUCK CRASHES THROUGH WALL OF CLEANERS

A large truck whose brakes failed at Sprigg and William today avoided vehicles in the intersection and parked cars in a used car lot, but then crashed through the wall of a cleaning establishment, coming to rest where a woman had been standing seconds before.

The owner of Crescent Cleaners, 132 S. Sprigg St., Mrs. Fern Bollinger, 167 Luce, said, "I missed being killed by the skin of my teeth and I will sure say an extra prayer tonight.

Claude Medlin Jr., 20, of Dexter was driver of the truck belonging to Interstate Flooring of Sikeston. He managed to avoid hitting a truck in the middle of the intersection, but in doing so, his truck jumped the curb and traveled across a service station lot, narrowly missing a car that was leaving the station.

Mr. Medlin said he then dodged cars parked in a used car lot, but although he had geared the truck down as low as it would go, he couldn't stop or avoid hitting the building and continued about 15 feet on the inside. He estimates his speed at the time of impact at about 15 miles per hour.

Mrs. Bollinger said she had been talking on the telephone and had just hung up the phone and started to fill an order when the truck broke through the wall and mashed the phone into another wall.

"The truck came in right on my heels," Mrs. Bollinger declared, and she added, "I sure am lucky I wasn't killed or hurt."

The sound of the truck hitting the side of the brick building was heard five blocks away and believed by many to be a sonic boom. Mrs. Bollinger said she felt that it was an earthquake at first.

Mr. Medlin said he was thankful for the shatterproof windshield of the truck, as the whole windshield was caved in, but it did not shatter. Water lines from the cleaners came poking through the broken windshield, said the driver, and (he) managed to dodge all of them.

Mrs. Bollinger said she was also thankful that the truck did not hit any steam lines in the cleaners, as more serious damage and possibly an explosion could have occurred if the lines had been broken.

She said the truck missed hitting the two new automatic presses that had been installed this summer when the cleaners was remodeled.

She estimated the damage to the building at about $6,000. Mrs. Bollinger also stated that a bank deposit of $700 had been lying near the phone when the crash occurred and she had to dig the money out from under the truck so that it would not get lost.

Mrs. Bollinger said she aged a few years when the truck broke through the wall, but quickly started praising the customers of the cleaners and owners of other cleaners in town, who were on hand to offer their help.

"I've got the greatest bunch of customers in the world," she said and explained that several persons had brought clothes in to be cleaned after the crash and said they would go ahead and leave them and would pick them up whenever the cleaners could be repaired and continue operations.

Mrs. Bollinger said she had been working at the cleaners for 34 years and added that nothing like that had ever happened to her before.

A second photograph ran the day after the accident, but the negative for that image has yet to be found. It shows Cape Girardeau police Sgt. Dan Harmon examining the debris-covered truck cab inside the building. 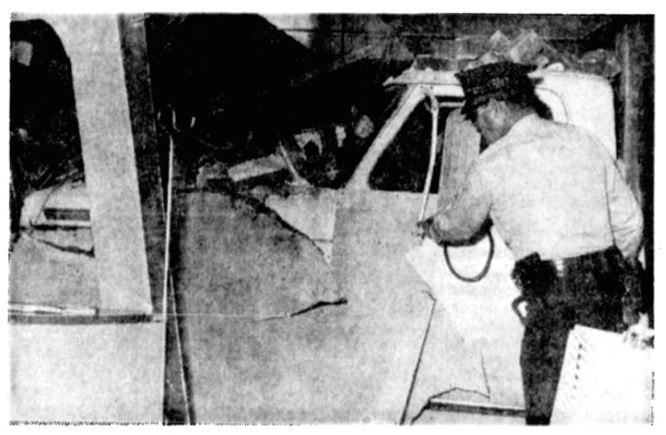