Two of my great uncles — Cyril Stehr and Frank Glaus — were both barbers, but not in the same shop. While Frank clipped hair and pumped gasoline in Commerce, Missouri, Cyril plied his tonsorial trade among what family lore says were underworld figures in St. Louis.
Cyril died two months after I was born, so I never knew him. But I spent many an hour in my Uncle Frank’s welcoming establishment.
I thought of him today, a jovial, good-hearted man who gave my twin brother his first trim, when I found the article below.
And in answer to your unspoken question, the Henry Sanders mentioned in the story is no relation. 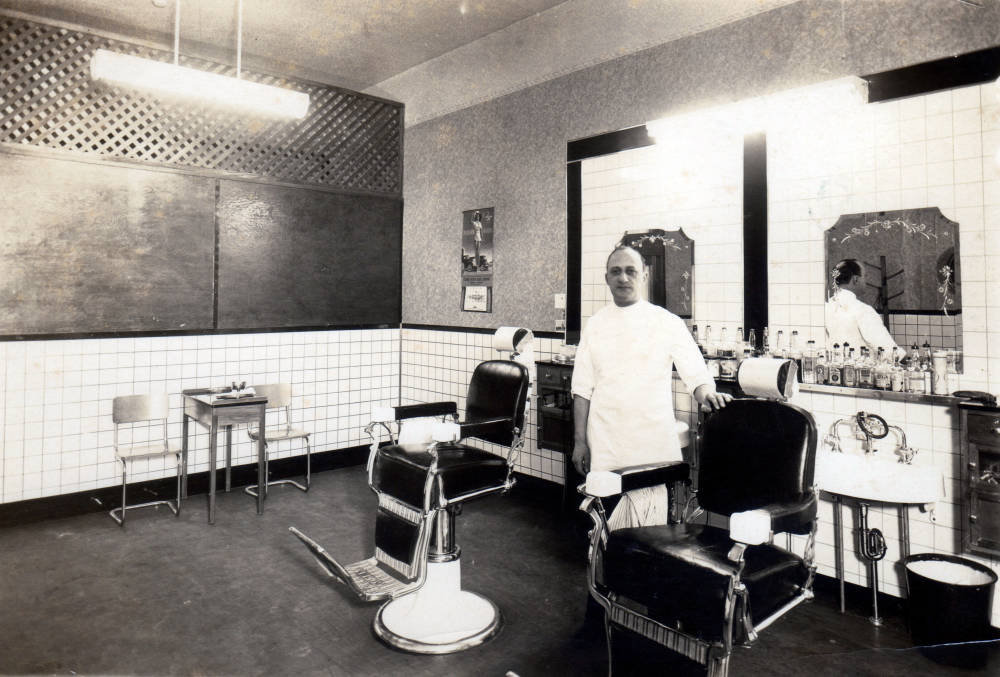 Cyril Stehr stands in his St. Louis barber shop in this undated photograph.

Mr. and Mrs. Henry Sanders, of Little Rock (Arkansas), have been visiting relatives and friends in Cape Girardeau. They formerly lived here but in recent years he has been in the motion picture business there and having accumulated considerable property expects to make that city his permanent home.

Mr. Sanders reminded the publishers of The Missourian that he came to Cape not long after they came. (The Naeter brothers came here in 1904 and Sanders in 1908. - Sharon) He related that 35 years ago yesterday he arrived to take a half interest in the barber shop on Main Street operated by the late Eddie Schindler. Barber shops were popular institutions in those days, most of them annexed by a rear entrance to a saloon. In this way leading citizens could walk into a barber shop, step through a rear door and satisfy their thirst without having everybody on the street check them as addicts of the liquor habit.

Such an arrangement also enabled a customer to establish his place in the line of waiting customers and then step into the bar to fraternize with convivial persons while waiting his turn in the barber's chair.

Such an arrangement was also a convenience for barbers, as a rule, who found it pleasant to take one (drink) occasionally, or frequently, as the case might be. And it came in handy when a customer asked his favorite tonsorialist to have something with him.

But Sanders had other things in his mind and liquid refreshments never appealed to him. He had a determination to get into a more lucrative business and it wasn't long until he had an interest in a picture show (theater) here in Cape. From then on he knew nothing else and success came to him in a large way.

On this 35th anniversary, he finds himself voluntarily retired from active business; he has several valuable pieces of commercial property in Little Rock, he still owns property in Cape and as someone frequently remarks, "he should worry!"

Twelve for a Dollar

"Cape was a different town in those days," Mr. Sanders recalled. "The place was booming and business was good. Barber shops charged 10 cents for a shave, with tickets for 12 shaves at $1, 25 cents for a haircut and shines were a nickel. They opened at 7 and closed at 7. On Saturdays they closed at midnight, which meant an hour or two later. They opened a at 8 Sunday mornings and closed at noon. Most every barber shop had bathrooms that attracted many customers who were willing to spend a quarter per week for an indoor swim. Not many shops have such facilities no."

Indeed times have changed, it was noted. Shaves cannot be had now for less than 20 cents and in some shops they are 25. Haircuts are 40 or 50 cents. A shave, haircut and shampoo total $1.05. Shines in most places are 15 cents and it costs 20 or 25 cents to have white shoes whitewashed.

Back in 1908 the Cape claimed 8,000 population. Within a block of the Commercial Barber Shop, which was about where the Clemens jewelry store is (137 N. Main St.), there was a saloon next door (Rodenmayer & Herbst, 133 N. Main St.), a saloon about where the Hecht store is (S.F. McClatchey, 105 N. Main St.), two faced the river between Themis and Broadway (Anchor Bar, Allen & Ruediger, 107 N. Main; the other unknown, but may have been in the Terminal Hotel, 123 N. Main St.), two were in the Riverview Hotel which stood at the corner of Broadway and Water street, and one was on Broadway between Main and Water (Palace Bar, John Walters & Co., 8 Broadway).

Big glasses of keg beer were available at 5 cents, whiskey by the drink was 10 cents, with "pony" glasses at 5 cents. Bottled "goods" of considerable age sold at $1 a quart, or six bottles for $5, and barrel stuff retailed at lower prices but was guaranteed to have ample power.

Customers in those days received considerable treatment in most all saloons. Lunch was served abundantly and free. Saturday nights were gala occasions with unlimited spreads of chicken stew, turtle soup and the like, and sliced sausage by the mile.

"Them were the days," as some of the boys still call it.

Then there was an economic side to the business. There were 23 saloons in the Cape then, each one paying a city license of $500. Also each one paid a county, state and federal license, making the total annual license fee around $750. So the city got $11,500 revenue from the saloons.

A recent statement from the city showed that at this time there are nine places in Cape with licenses to sell 5 percent beer at $40 per year each; 13 places with licenses at $15 each to sell 3 percent beer, which was decreed by the Legislature to be non-intoxicating so it might be sold at any time, anywhere, Sundays as well as other days, and especially to children.

So there are 22 beer joints in the town, as they are commonly called, paying a total license tax of $555 and 12 retail liquor stores at $75 each permitted to sell liquor by the bottle on week days only.