In March 1962 the Cape Girardeau Country Club hired a married couple -- Fred and Murle Lindstrom -- as golf pros, after several years of having no one in that position.

Three months later, Murle Lindstrom headed for Florida and the U.S. Women's Open golf championship, intending it to be her last tournament. She came home with an unexpected first-place finish. 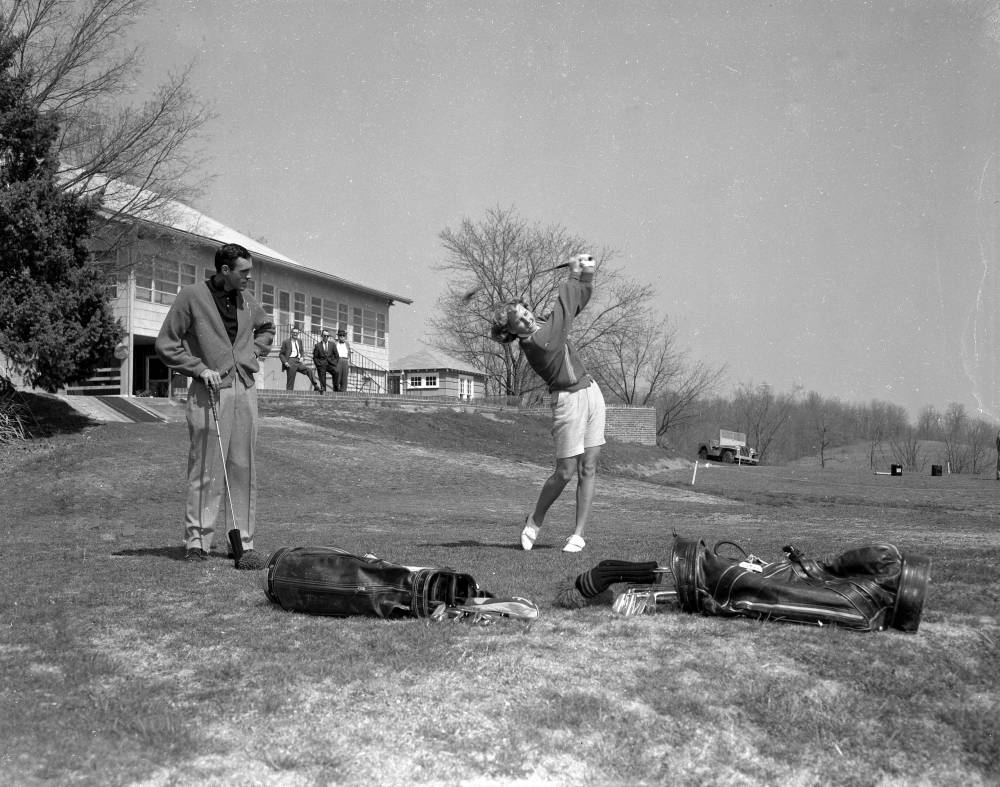 HOW'S THIS FOR FORM? New professional golfer at the Country Club, Fred Lindstrom, watches his wife, Murle, and fellow professional golfer, tee off Tuesday in a practice round during the beautiful weather enjoyed here. The pair will direct golfing operations, as well as give lessons, at the golf course this summer. The trio of men in the background seem to agree with Fred, as Mrs. Lindstron displays good form in getting off an excellent shot straight down the fairway. (G.D. Fronabarger ~ Southeast Missourian archive)

After not having a professional golfer on hand for years, the Cape Girardeau Country Club has taken a complete turnabout by getting not one, but two pros.

The two, however, are a bargain because they come for the price of one. They are a husband-wife team, Fred and Murle Lindstrom, who have been playing golf since their early teens and who met, courted and now practically live on a golf course. (They got married in a church.)

Fred, 25, a native of Jamestown, New York, has been playing since he was 13 when he commuted with his parents between Jamestown and Florida. His father was in the mobile homes business and young Fred spent the winters in Florida and his summers in New York. He would go half a year in school at both places until his high school days when he stayed at Jamestown High, starring in basketball.

Murle, 23, has been playing since she was a girl of 15 in her native St. Petersburg, Florida.

The male half of the golf team received a basketball scholarship to Baldwin-Wallace, where, incidentally, he was a teammate of Wynn Hawkins, now of the Cleveland Indians in professional baseball. While there he met, by accident, the professional at the Chagrin Valley Country Club. The pro was so impressed by Fred's golf game that he offered him an assistant position at the country club.

"I always had a desire to be a professional golfer," Fred said. "But it was buried back in mind. I never thought I was good enough until I was offered this job."

He quit college and has been a professional ever since.

It was during this time, when he was spending his winter in Florida, that Fred Met Murle -- where else? On a golf course, of course.

"I had just finished a round when I noticed this attractive girl on the putting green, getting some practice in," Fred recalls. "I went over to talk to her, and before you know it we had a date that night."

When Fred returned to Cleveland, later became a pro at the Warren, Pennsylvania, Country Club, and still later went into service, his courtship of Murle had an inconsistent course. They stayed in close contact, however, via the mails and telephone.

"We spent all our money those days paying the phone bill," Fred said with a chuckle.

Last summer he got out of the service and the two of them went together to guy a golf driving range in Jamestown. They were married July 3, 1961. They sold the range in the fall and went to Florida for the winter, where Fred took an associate pro position at Venice while Murle played the golf circuit. Fred has never been on the circuit, but Murle has. (The circuit refers to a series of golf tournaments held across the country in which top professional golfers complete.)

Mrs. Lindstrom turned professional right after high school in 1957. She entered the golf tour right away and although not winning any major tourney first place, she consistently placed in the money enough to earn her living. The highest finish was the second place. In 1959 she was voted the most improved female professional golfer.

She finally hit pay dirt during the present winter tour when she won the North Palm Beach Tournament in February, nosing out nationally famous Mickey Wright by a stroke.

Fred and Murle will both give lessons in golf as part of their duties at the Country Club (the city's golfers have been without any professional instruction). Murle will take time out from time to time to continue on the golf tour on a part-time basis, hitting only the major tournaments. She plans on competing in the Title Holders Tournament at Augusta, Georgia, in Mid-April.

The couple will be in charge of the Pro-Shop, where golfing supplies can be purchased, and will also handle a club storage facility. Fred will divide some of his time with the Jaycee Golf Course, giving instructions there.

He says he has plans for conducting interesting and different tournaments for the golfers in Cape Girardeau, in hopes of stirring up even more interest in one of the fastest growing sports in America today.

Fred indicated that next winter he might take a fling at the golf tour himself, through the winter months while golfing activity is at a standstill here in Cape Girardeau.

The couple will live at the Country Club, but are presently staying at a motel until living arrangements at the club are completed.

Unlikely winner has enjoyed many walks in sunshine