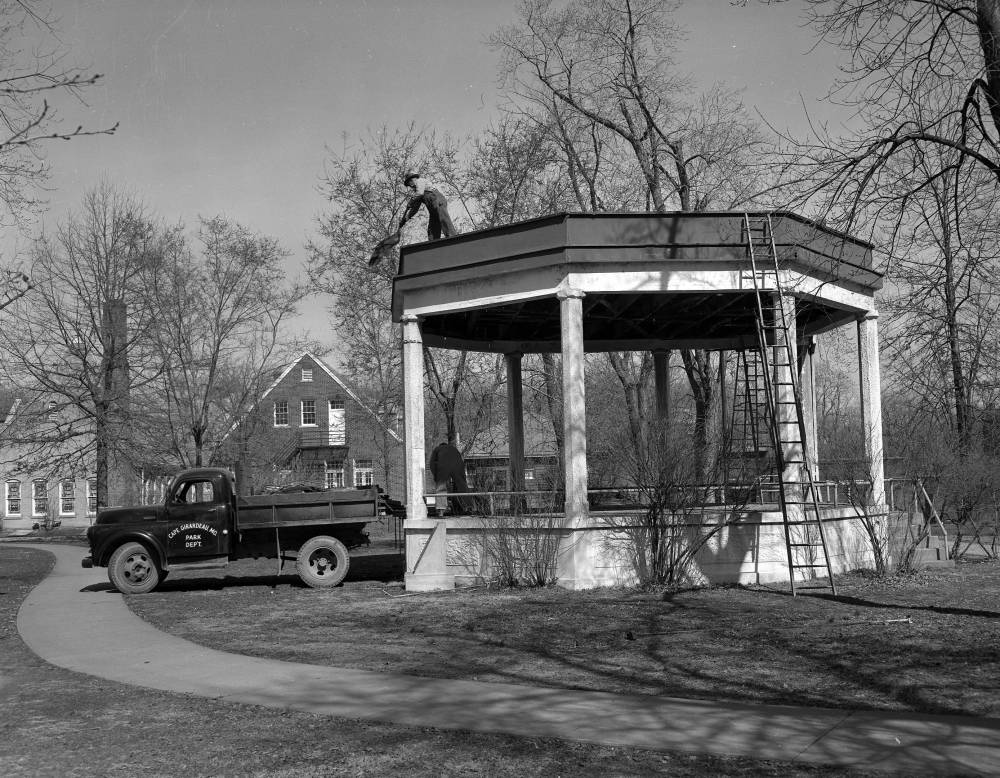 The old bandstand in Ivers Square received a face lift in March 1956. The top of the structure was deemed unsafe, as the upper timbers had decayed. The old top was removed and a new one installed. (G.D. Fronabarger ~ Southeast Missourian archive)

Over the years, when asked when the gazebo in Ivers Square/Courthouse Park was built, I'd pull out publisher George Naeter's hand-written notes on the history of that property and quote his notation: "1913 Aug. 27 - Bandstand used first time."

Unfortunately, Mr. George and I have been wrong all these many years. The 1913 bandstand isn't the same structure that graces Ivers Square today.

In researching last week's blog about architect W.E. Parlow, I hunted for structures that were credited to him and their dates of construction. One of these was the Courthouse Park gazebo. But, I reasoned to myself, if Parlow didn't establish his business here until September 1913, would he have designed a bandstand for Cape Girardeau months before that? And so, with the assistance of historic preservationist and friend Terri Foley, we searched for all references to Parlow that might shed light on his career in Cape Girardeau. That search uncovered the misinformation that has been repeated by this newspaper for years.

Here's what we found.

On June 2, 1913, on a motion by Councilman William H. Coerver, the Cape Girardeau City Council instructed its building committee to have plans drawn and receive bids for the construction of a concrete bandstand at Courthouse Park. According to a newspaper account, "Mr. Coerver called the attention of the council to the fact that one has been needed in the park for years and that the recent Elks (convention) made the need more pronounced."

Apparently these instructions did not bear fruit, however, because in August, A.H. Hinchey appeared before the council and asked that a temporary, wooden bandstand be built. Hinchey pointed out that Dr. C.E. Schuchert had reorganized his band and had agreed to play a weekly concert in the park through the summer. In appealing to the city fathers, Hinchey said there would be no cost to the city: "... Union Lumber Company would contribute sufficient lumber for the purpose... (and that) Mr. Vaughan would erect the bandstand. The estimated cost of the cut lumber and labor would amount to about $10."

With the council's consent given, a wooden bandstand was built, and it was this structure that was first used on Aug. 27, 1913, by Schuchert's band.

Fast forward three years. On July 20, 1916, The Cape Girardeau Weekly Tribune newspaper reported that an effort was underway to collect funds to build a modern "band shell" in Courthouse Park. According to the article, "...Cape Portland Cement pledged to give the cement necessary in making the structure. The Morrison Ice & Fuel Company promised to donate the sand, and Edward Hely of the Hely rock quarries promised to give all the rock that is essential in making the structure. Tentative plans for the shell provide for a concrete base and floor with the upper part of the shell done in fine woods that will be so worked in that the acoustics will be as nearly perfect as may be obtained. W.E. Parlow, architect, has offered his services in drafting plans and specifications for the shell; Will Gerhardt, contractor, declared he will donate his services in overseeing the construction work and getting it done in the proper manner. The Missouri Public Utilities Company also made a pledge of their active cooperation in the construction of the shell and it is anticipated that the wiring will be their share of the work."

In August 1916 the City Council set aside the land in Courthouse Park for the bandstand and even donated $400 out of the city park fund for its construction. In all the bandstand cost between $1,400 and $1,500 to build.

The gazebo, the one that still stands in Ivers Square, was put to use for the first time on Sept. 12, 1916, with Schuchert's band entertaining a large crowd.

The Daily Republican described the event: "A thousand or more people of Cape Girardeau and neighboring towns last night were treated to one of the finest band concert programs ever heard in this city. It was the opening of the splendid new bandstand, just completed at the expense of the music lovers and others interested in the progress of the town, and both members of the band and the citizens who filled the park showed their appreciation, the former by their generous response to the encores and the latter by their loud applause at the end of each selection. The air was filled with the noise from the horns of the dozens of automobiles lined along Lorimier and Themis streets, and the great number of men, women and children who gathered about the stand was splendid evidence that Cape Girardeau is proud of its band."