Haarig landmark ran out of luck in 1923

August Shivelbine's Arcade Saloon at Main and Themis streets may have been the "wettest" spot in Cape Girardeau, but the Star Bar at the northeast corner of Good Hope and Sprigg streets was the luckiest. At least that's what was reported when the building was razed in 1923. 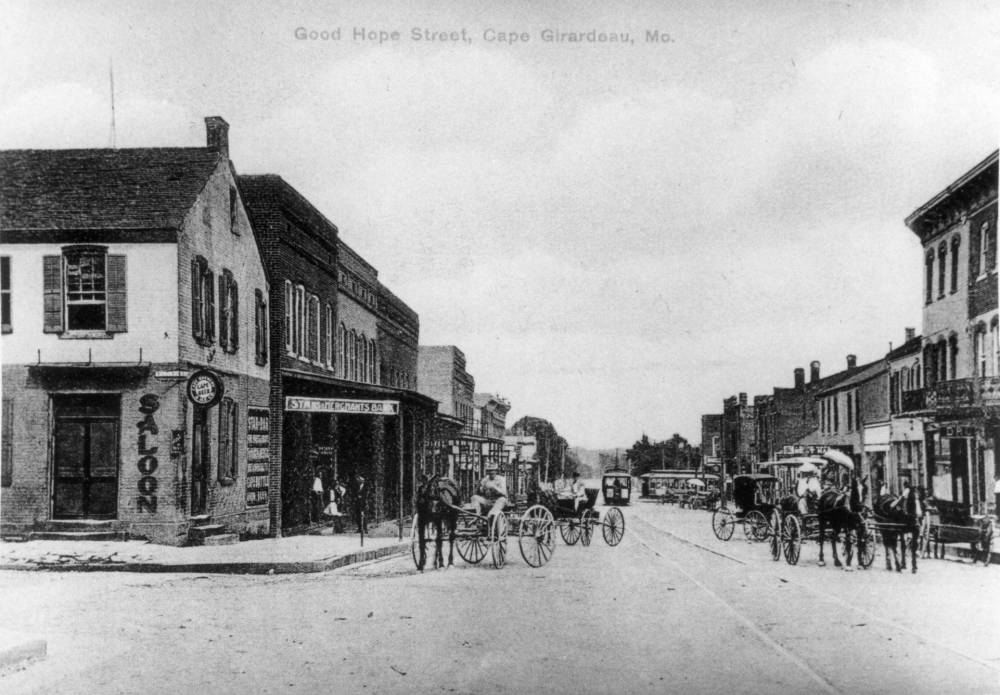 The Star Bar is the light-colored building at the left edge of this photograph. The picture was taken near Sprigg Street, looking east down Good Hope Street. (Photo courtesy of Tom Hopen ~ Southeast Missourian archive)

LANDMARK IN HAARIG WILL BE TORN DOWN

Moeder to Construct Modern Building at Sprigg and Good Hope at Once.

The old brick building at the corner of Sprigg and Good Hope streets -- one of the landmarks of Cape Girardeau erected nearly 65 years ago -- is to give way to a two-story business structure.

C.G. Moeder announced today that razing of the old building would start Monday morning and that as soon as the debris is removed, work on the new building will start. Plans for a two-story structure, with the first floor for a business house and the second to be used for office rooms, have been completed and are in the hands of Hugo Pfisterer, contractor, who will supervise the work. The building will cost more than $12,000, Moeder said.

Steel girders have been secured and the building will be constructed of brick and reinforced concrete, with a concrete floor.

The property on which the new structure is to be constructed has been in the Moeder family for 65 years. The lot was purchased by the late John Vogt, father-in-law of Moeder, on May 19, 1858, from General Watson, who owned considerable land in that section. Mrs. Moeder was born in the building which was erected soon after the lot was purchased. The original purchase was a lot of 112 feet by 180 feet, but a part was sold to William Huters, father of Billy Huters, Cape Girardean. The purchase price as set out on a deed filed at Jackson was 12 new wagons to be delivered at Commerce, Missouri.

The corner building was used for years as a saloon and achieved a reputation for profitable business. For years it was looked upon as one of the more prosperous corners in the city. It is said upon good authority that every man who went into business at that stand, quit with a handsome fortune to his credit. Luck seemed naturally to follow fast on the heels of any newcomer who started there, old residents say.

The first saloon was started there shortly after the (Civil) war by Valentine Herold, a soldier in the Civil War, who was started in business by Vogt. He prospered and at the time of his death in 1883 had amassed a comfortable fortune. He was succeeded by others who also prospered, and Ed. Frenzel, who had the place when prohibition came in, was the last proprietor. The place has since been operated as a soft drink stand since that time.

Construction of the landmark's replacement apparently met few delays. By the end of December 1923, Charles Cofer was moving his men's furnishings store from 631 Good Hope St., to the first floor of Moeder's new structure. Cofer continued to do business at that location until June 1, 1956, when he sold it to Leon Haman. Haman died on June 26, 1957. Two months later, the business was sold to Clarence "Cutter" Schade, the owner of a Jackson clothing store. Clarence took over management of the Cape Girardeau store and his brother, A.A. Schade, ran the Jackson location.

A variety of businesses operated at that location after Schade's Men's Wear closed in the early 1970s. The structure finally was torn down in November 2016, after a fire damaged the building in June of that year. The blaze started in a second-floor apartment.