Tucked away among the photographs that came to me from the late historian Katherine Cochran was this gem, taken at the Schumer Springs health resort hotel. 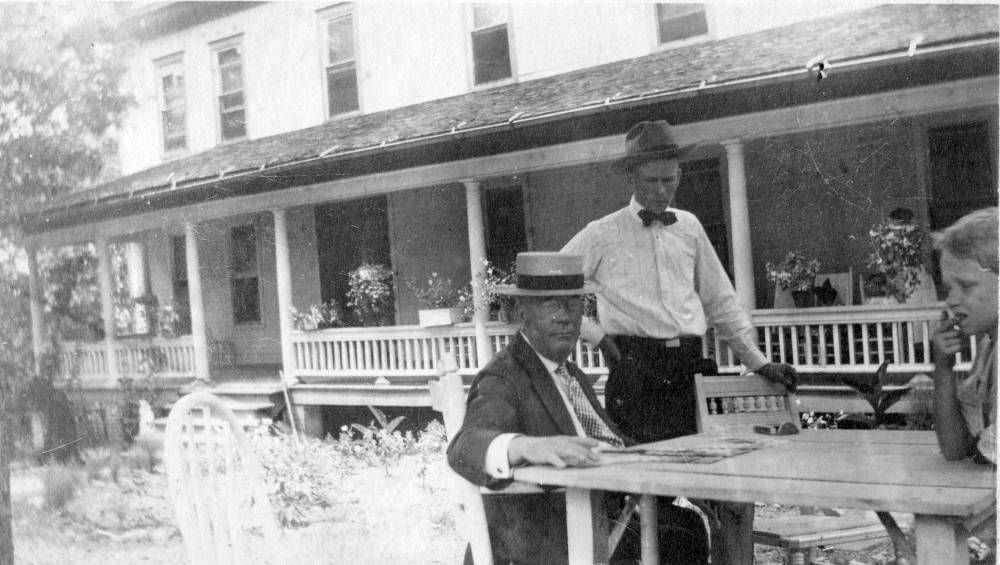 Pictured playing cards at a table in front of the big hotel is local civil engineer Major James F. Brooks. (More about him in next week's blog.) The photograph was taken in July 1920. The man standing near Brooks is a Mr. Griffith, and the boy is unidentified.

Finding the image made me curious about the history of Schumer Springs. And again, Katherine Cochran came through with an article about the site's history.

June is synonymous with vacations. Today the cost of a vacation, including travel, hotel/motel accommodations, meals and amusements can be expensive, and the average person, or family, finds the cost prohibitive.

In the not too distant past, vacations were enjoyed by almost everyone, and were less expensive. One resort popular in the immediate area was Schumer Springs, in Perry County, a mile and a half west of Biehle. The resort no longer exists, but recounting the charms, and the benefits derived from the mineral springs the question of why it has not been rejuvenated is puzzling.

Schumer Springs, two in number, were discovered by Frank Schumer on his 20-acre farm in 1880. A veteran of the Civil War, he was plagued with several maladies. According to the story he related later, at the time he found the springs he was thirsty and drank some water. The taste was pleasing so he continued to drink the water for a period of time. After a while he noticed how his health had improved. Delighted at his discovery, he told his family and friends. Almost immediately he was besieged with requests for camping privileges at the springs.

The additional income from letting other persons camp on his farm and drink the mineral water provided advantages for his large family, consisting of his wife and 16 children. Schumer thought he had found a pot of gold by discovering the two springs.

What he did not know was that long before Louis Lorimier established his home in what is now Cape Girardeau (1793), native Missouri Indians had knowledge of the springs, drank and bathed in the mineral waters.

Mineral springs and health spas have been popular in Europe and other countries for centuries. Karlsbad, Austria, frequented by Emperor Franz Josef, being one of the most famous.

In the United States two mineral springs in Virginia, Hot Springs and the Homestead Hotel, and White Sulphur Springs, and the Greenbrier, have been popular since Colonial times, and the springs were known and visited by Indians before white settlers established villages along the eastern shore. The construction of the Baltimore & Ohio Railroad, before the Civil War, made the resorts extremely popular, and they are year around vacation resorts today.

While the Schumers operated the springs, very primitive facilities existed. Usually campers brought their own tents and cooked over fires.

At the turn of the present century (1905), a group of physicians in Cape Girardeau, Perry and Ste. Genevieve counties decided to purchase the 20-acre farm and build a hotel/sanitarium at the springs.

By this time many persons had visited Schumer Springs and benefited from drinking the mineral water.

The Schumer Springs Sanitarium Company was organized and samples of the water from both springs were analyzed at the University of Missouri, and the laboratory at the St. Louis College of Physicians and Surgeons, St. Louis. The results (showed) that both springs contained alkaline water of common origin, from considerable depths in the earth, the alkaline character and the composition rendering them valuable as therapeutic agents.

Dr. J.J. Mayfield was resident physician in charge of the sanitarium, and Dr. A.I. Dalton was his assistant. Mrs. Sally Peterman of Jackson was in charge of the dining room and meal planning. Mrs. Peterman was known as an excellent cook, and since she had managed other hotel dining rooms in the Cape Girardeau area, and the Central Hotel in Jackson, the meals she served were an excellent advertisement for the Schumer Springs enterprise.

A brochure printed in 1906, and available at the business office of the springs in Jackson and in St. Louis, gave the names of many well-known residents who endorsed the resort. The list was headed by Hon. Louis Houck, Cape Girardeau, whose railroad, the Cape Girardeau & Chester, made the springs accessible to persons coming to Southeast Missouri on the Frisco, Cotton Belt, Illinois Central, and Missouri Pacific. Houck's line stopped at the Biehle Station, and a hack from the springs met visitors going to Schumer.

Some of the local physicians who endorsed the use of Schumer Springs mineral water were: Dr. R.T. Henderson, Dr. Will H. Mayfield, Jackson; Dr. Edward Brown Kinder, St. Louis; Dr. A.E. Dalton, Friedheim; Dr. Charles Miller, Fredericktown, and Dr. W. Russell, Longtown. There were many others. Visitors from a 100-mile radius enjoyed vacations at Schumer Springs, where weekly rates were about $8 a person per week. When the guests were not eating (a pastime they enjoyed), they played cards, read, sewed, walked, and sat in the rocking chairs on the big porch, visiting and chatting with other guests.

Many area residents remember how enjoyable it was to drive to Schumer Springs for one of "Aunt Sally's bountiful Sunday dinners." The tables were so loaded with good things to eat, you couldn't get another dish placed on the white linen tablecloths.

The price for Sunday dinner was $1 -- and all a visitor could eat.

The hotel is gone; the grounds are overgrown, but the two mineral springs still flow -- as they have since they sprang from the earth centuries ago.

An article written by Bob Todd, the Missourian's Jackson correspondent, on Aug. 26, 1969, gave more details about the Schumer Springs resort:

According to records on file in the Cape County Courthouse, it was on Oct. 2, 1905, that six Jackson area men formed two corporations for the purposes of developing the springs.

One was the Schumer Springs Reality Co., started with $12,000 capital, and designed to lay off town lots, streets, build houses for sale, lease or rent.

At the same time, the Schumer Springs Sanitarium Co. was founded with $100,000 capital to buy, own and improve land for a health resort.

The stated purpose of the corporation was to buy, lease and operate the medicinal springs, erect hotels, bath houses, cottages, and to provide attending physicians.

On Oct. 19, the group purchased the springs from Frank Schumer. Further deeds, consolidating their holdings, are to be found in the Perry County recorder's office through 1907...

Through the early years the springs did a thriving business. Mr. Hartle said Mr. Mayfield and Mr. Kurre moved up to Schumer Springs initially.

In 1910, J.B. Miller was put in charge of the hotel. The same year a fire did some damage to the resort, but it remained open for business.

In 1922 it was sold to J.V. Priest of Jackson, who moved there to try and revive the business. Mrs. J.V. Priest, daughter-in-law of the owner, still lives in Jackson and said she can remember visiting her in-laws there.

She said it was a beautiful place, but it just didn't pay. Efforts to increase business with plans for a pool room, dance hall, golf links, tennis courts and baseball field were not enough.

In 1924 it was announced that the hotel had been remodeled for light housekeeping and Mrs. Sallie Peterman Halter was in charge.

Exactly when the hotel ceased operation is unknown. It had once during its time accommodated guests in 40 rooms and met people in Biehle with a horse-drawn hack to take them to the springs...

An old store at Schumer Springs operated for many years after the hotel closed. Then the hotel fell down and just recently the old store was torn down.

All that remains now is a pile of lumber in a field where the store stood and the concrete foundation of the hotel with sumac, ash and poplar trees growing in the basement.

The main spring is covered by a corrugated metal canopy, the spring itself encased in a concrete spring box rebuilt in 1958. Area people still drive down to the spring for water occasionally.

The smaller spring is lost in the underbrush...