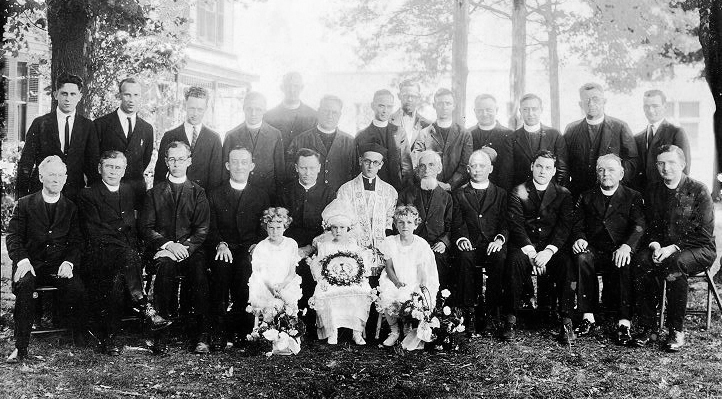 EDITOR'S NOTE: I received a note from Rick Bohn of Scott City, who helped identify the photograph above. Ricky shared: "Sharon, I'm fairly certain that the recent photo published regarding Father Lilly was misidentified. The same photo appears in the commemorative book 'Our Parish Years 1878-1978,' published in 1978 to celebrate the centennial of St. Augustine parish in Kelso. That particular photo was taken on June 11, 1925, when newly ordained Father Joseph Keusenkothen celebrated his first Mass at his home church. Father 'Joe,' as his parishioners knew him, is the spectacled priest in the center and had been ordained on June 6. Sometime in 1926 Father Keusenkothen was assigned to St. Augustine's first as assistant and eventually pastor of the parish and remained in Kelso until his death in 1976." A big THANK YOU to Rick for setting the record straight.

From time to time, people give me photographs. They know that I'll scan and preserve the donated images in the Southeast Missourian's library. That's how I received the photograph above.

It came to me undated and shows a group men, most of them Catholic priests, and three small girls dressed in white. I recognize only one person in the image. The bewhiskered gentleman sitting to the right of the cleric dressed in white is the Rev. Eberhardt Pruente, long-time pastor of St. Mary's Cathedral in Cape Girardeau. (A caller on Monday informed me that the man seated second from right is the Rev. Michael Helmbacher of Oran, Missouri.)

If I had to guess, I would say the man dressed in white was the Rev. Joseph L. Lilly and that the photo was made following the celebration of his first Mass on June 16, 1918, in Cape Girardeau.

I was reminded of the photograph recently, when I came upon stories in the Southeast Missourian about his ordination.

Today Joseph L. Lilly, son of the late Edward S. Lilly, will be elevated to the priesthood of the Roman Catholic church, being ordained by His Grace, the Most Reverend John L. Glennon, archbishop of St. Louis, in the chapel of Kenrick Seminary, Webster Groves.

Joseph Lilly was born and reared in St. Louis, receiving his early education at the parochial school and St. Vincent's College. His college and theological education was finished at St. Mary's Seminary at Perryville after which he returned to Cape Girardeau and St. Vincent's College in September 1917 as an instructor in Gregorian chant, having made a special study of church music.

Special music has been arranged for the occasion by the choir. Mrs. Robert Thomas will be organist in the absence of Mrs. P.A. Hoch, and Miss (Frieda) Rieck, violinist, will play the Mass. Rev. R.J. Kirschenenter, musician at St Mary's Seminary, will assist the choir.

Mrs. Mary (Albert) Lilly, mother, and John, Thomas, Robert and Meredith, brothers, and Dorothy Lilly, a niece, are in St. Louis attending the ordination ceremonies today. All relatives except Edward S. Jr., a brother, who is receiving military training at Portsmouth, Virginia, will be present at Father Lilly's first Mass. Robert will leave immediately afterwards for Texas to enter a radio school to prepare for service for his country.

Was Carrier Boy on Republican

The publishers of The Missourian are particularly interested in Father Lilly as 14 years ago he was a carrier boy on the Daily Republican, now the Daily Southeast Missourian, being one of the first boys to carry the paper when it was getting a start in Cape Girardeau.

He was one of the best carrier boys the paper has ever had, showing in those boyhood days the character for earnestness and scrupulous attention to duties that has since characterized his work as a student...

MANY TO ATTEND FIRST MASS SAID BY FATHER J.L. LILLY

Many Cape Girardeans will attend the services at St. Vincent's Church at 10 o'clock tomorrow forenoon to hear the first solemn high Mass said by the Rev. Joseph L. Lilly, just ordained a priest by Archbishop Glennon.

Father (Eberhardt) Pruente announces there will be no services at St. Mary's Church as many of his parishioners desire to attend the ceremonies at St. Vincent's. (This report was apparently in error. The Cape Girardeau Weekly Tribune newspaper pointed out that Pruente moved the Mass times at St. Mary's an hour earlier than normal, to allow his parishioners to attend Lilly's first Mass. Canceling all the Sunday Masses at a Catholic church would be very unusual. -- Sharon)

The Knights of Columbus will attend in a body and many people of other denominations will attend because of a personal friendship for the young priest and his family. 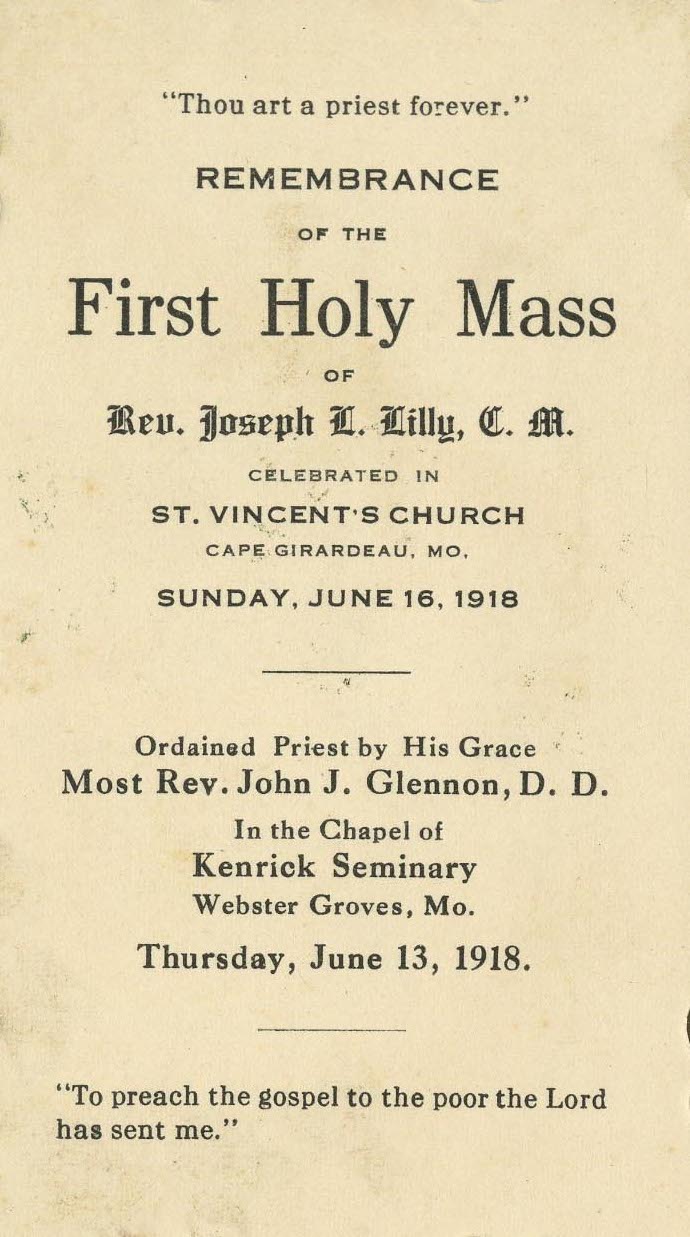 Beautiful and impressive ceremony when young priest begins his career.

Not only were the people of his own church present, but many were there from other denominations, personal friends of the young priest or his family.

In the venerable building in which his ancestors had worshiped, in which he had been baptized, taught the beautiful lessons of his religion and in which he had taken his first vows and made his first communion, the young priest performed his first duties as a consecrated priest.

The old church was beautifully decorated by the hands and hearts of friends; the sun of a beautiful day came through the stained-glass windows in mellowed light of God's glory and over all was a feeling of beautiful peace and the comfort of a reverence that takes one's mind away from the world's turmoils.

As the members of the congregation, and those there through a personal interest in the young celebrant, followed the beautiful and impressive ceremony, there came thoughts of the career just opening to the young priest who had given his life to the cause of making the world a place in which to abide more in conformity to the teachings of Him who waits for all at the close of the earthly pilgrimage.

Some knew him as a babe, as a boy, as a student, but in observing the earnestness of the man of God in his apparent consecration to the cause of the Master, the thought came into the mind of all "He has been truly called."

According to The Weekly Tribune, the Rev. Lilly was "the third priest born in this city to celebrate his first Mass here. It will be the first church festivity of its kind in this city in more than 10 years."

Lilly served most of priestly career with the Congregation of the Mission (the Vincentians) in the classroom, teaching and studying. His obituary, published March 24, 1952, in the Southeast Missourian, pointed out that he was "an authority on Catholic Scripture" and had been teaching at Kenrick Seminary in St. Louis "since last fall. Previously he had taught at St. Mary's Seminary, Perryville; St. Thomas's Seminary, Denver, Colo., and at Catholic University, Washington, D.C."

The obit continues, "He was educated at St. Mary's Seminary, and was ordained by the late Cardinal John J. Glennon in 1918. He continued his studies in Rome at Collegio Angelico and received the Doctor of Theology degree in 1920.

"During 1933 he made biblical studies in Palestine and a year later received a licentiate in Sacred Scripture from the Pontifical Biblical Commission in Rome. He is a former secretary of the Catholic Biblical Association and was one of the translators of the New Testament for the Confraternity of Christian Doctrine." 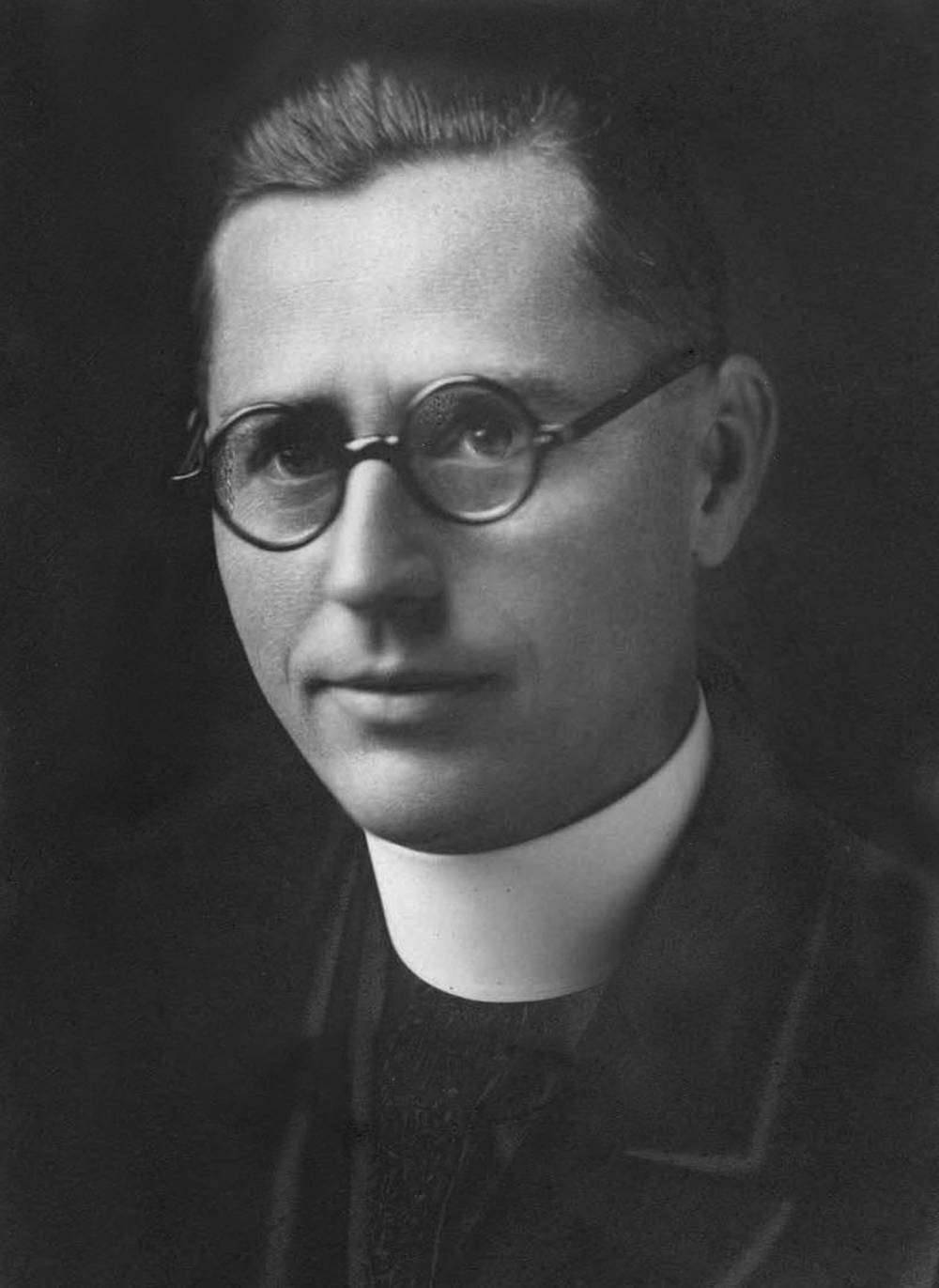 In researching this blog, I contacted the DePaul University Library in Chicago, which houses the Vincentian Archives formerly located in Perryville. While they were not able to confirm that the photograph at the top of this blog is of Lilly, they were kind enough to provide me with several pictures of him, as well as the documents in his personnel file. One of those documents, perhaps written for a Vicentian publication, is titled simply, "Joseph L. Lilly, C.M., July 1, 1893 -- March 21, 1952."

"A Vincentian influence extending beyond his first days at the Apostolic School left a deep impress on Joseph Lilly. Willy-nilly he seemed destined for the Little Company. He used to reminisce about the Sunday afternoons his father would take him to the (St. Vincent's) College at Cape, and while the father talked with one or other of the priests of St. Vincent's College, the boy enjoyed the importance of being with his elders, and the excitement of the vantage point from which to view the river.

"From this beginning, he proceeded through the regular channels into the Vincentians. He led an ordinary life -- Apostolic School, Novitiate (where he remembered staying up one night in 1910 to watch Halley's Comet), Scholasticate (1912), Priesthood (1918).. Ordination, in one sense at least, made his life even more ordinary. Now he was able to enter actively into the Vincentian apostolate, and enter actively he did.

"What kind of work is the Western Province engaged in that did not employ the talents of Father Lilly? As far as we know, only the foreign missions. Of course, we all knew him primarily as Professor of Sacred Scripture. All the years of his community life he was stationed either at a Seminary or a University -- teaching or learning. His scholarly activities took him to Rome (S.T.D., Collegio Angelico, 1922), to Palestine (S.S.L., Pontifical Biblical Commission, 1933). His teaching assignments ranged from Catholic University in Washington (1942-8) to St. Thomas Seminary in Denver (1933-41). St. Mary's of the Barrens (in Perryville) claimed at least 26 of his almost 42 years of community life.

"Besides his ordinary teaching assignments, Father Lilly was very active in organizing the Catholic Biblical Association, of which body he served as President, and later Secretary, while the Confraternity Revision of the New Testament was being completed. Most recently in this field, Father Lilly completed a new translation of the New Testament, in which he undertook the Epistles, and the late Father Kleist, S.J., the Gospels. Other works by Father Lilly were a commentary on the Canticle of Canticles, by Father Pouget, C.M., and The Missionary Ideal of the Priesthood of Vincent de Paul, by James de Larue.

"We must not forget his zeal and self-sacrifice in the post of Provincial Director of Studies, in which role he helped to inaugurate the present accelerated summer school program. He constantly strove to promote a high intellectual and cultural level among the students here, an effort in which his Lecture Series proved very helpful.

"Father Lilly's priestly activity, however, was not exclusively academic or speculative... The Motor Missions and Street Preaching were a part of the apostolate which Father Lilly loved well, and the summer weeks found him making 'the rounds of the towns and country districts,' breaking 'the bread of the Divine Word to little ones by preaching and catechizing.'

"One final activity of the Western Province is the conduct of parishes. Father Lilly's activity extended to this also. During his many years at Perryville, he served at various times as pastor at Crosstown, Brewer, and Silver Lake. His occasional remarks in class were a clear indication of how much he loved his parish, and how selflessly he served it..." (Courtesy of Rev. Joseph Lilly, C.M. Personnel File, DeAndreis-Rosati Memorial Archives, Special Collections and Archives, DePaul University Library, Chicago, IL.)