Funeral homes bow out of the ambulance business 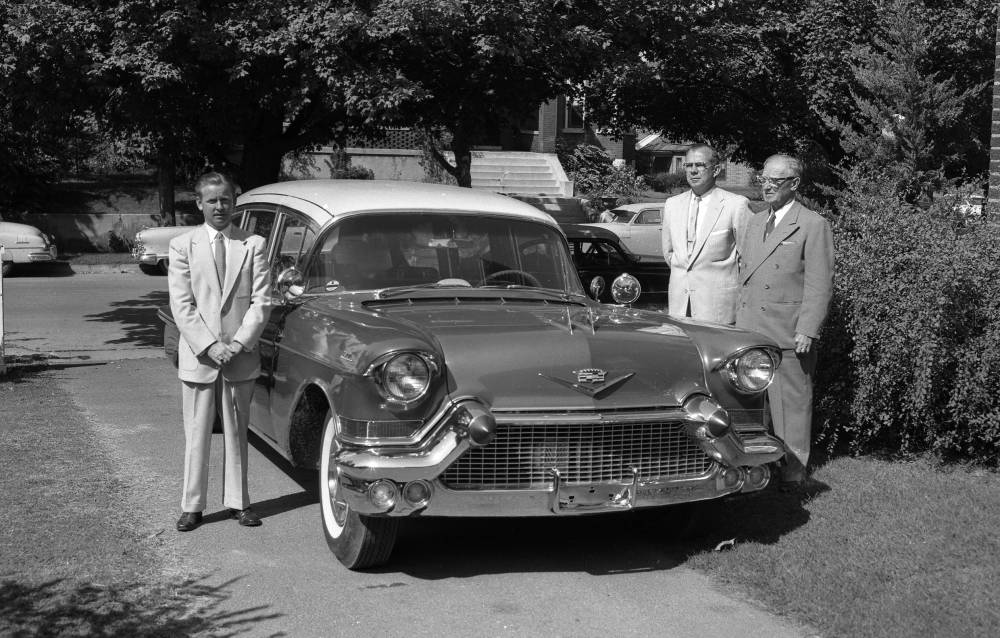 Staff members of Walther's Funeral Home in Cape Girardeau show off the company's new hearse in a photograph likely taken around 1957. From left to right are Lee Townes, Virgil Welch and Tony Hohler. Up until 1968, funeral homes in the area also provided ambulance service for the transport of live patients in need of medical care. (G.D. Fronabarger ~ Southeast Missourian archive)

On March 26, 1968, the operators of funeral homes in Cape Girardeau County announced they were getting out of the business of transporting live patients. Simultaneously, George Rouse of Jackson announced his intention to open and operate the Cape County Private Ambulance Service beginning April 15, 1968.

A newspaper article explained the change: "In making the joint announcement, the funeral homes said new federal regulations put those in ambulance work under the wage and hour law and bring about other restrictions.

"The funeral homes explained in order to maintain an ambulance service, it is necessary to pay for the ambulances themselves, purchase modern and comprehensive emergency equipment and employ first-aid trained attendants to be on call 24 hours per day. Law requires two attendants to man the ambulance on each call."

A Missourian editorial "regretted" the termination of the "excellent ambulance service (funeral directors) have given through the years," but noted, "Funeral directors ... have pledged their ambulances for use in case of catastrophes where there are a great many injured, such as the 1949 tornado."

While we no longer associate funeral homes with emergency medical transportation, that had been a common practice in Cape Girardeau since 1911, when Martin G. Lorberg brought the first horse-drawn ambulance to town. Fred Lynch wrote a blog about it several years ago.

The business that Lorberg established was still going strong in 1968. In fact, there were nine funeral homes operating in Cape County at the time, each with ambulances. Identical advertisements, both in size and content, were published in the Missourian on April 11, 1968, for each funeral home, declaring it was going out of the ambulance business. The advertising display is eye-catching, as the two-column ads are stacked side by side, and one on top of the next. They take up almost half of the newspaper page. 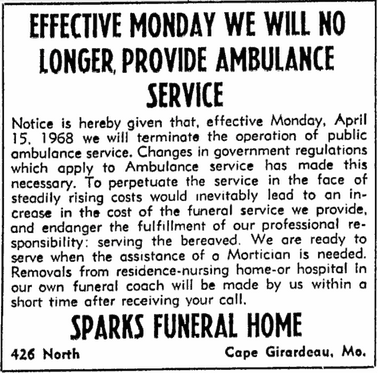 Along with Lorberg, the other Cape Girardeau funeral homes were Brinkopf-Howell, Ford and Sons, Steinhagen-Haman and Walther's. Those located in Jackson were McCombs, Deneke-Laird and Cracraft-Miller.

Histories of the county funeral homes were compiled by Willard H. Estes in 1976 as part of a series of bicentennial features. My notes updating his articles are in parenthesis.

John Cluley was the first undertaker in Cape Girardeau. His furniture and undertaking place of business was at Harmony (Broadway) and German (Main) streets near where the First National Bank (was) located.

He was recruited in the Cape Girardeau Home Guards in 1861 during the Civil War, and was a member of the Board of Education of the first public school held in the basement of the old Presbyterian Church in 1867...

Funeral homes operated by the following men that had been in business from the 1800s until 1948 and have since closed are:

August Walther, a master furniture and cabinetmaker, arrived in Cape Girardeau in 1864 and established the "A. Walther" (store). He designed, produced and sold finished products to the families of our community whether it was furniture or coffins. Mr. Walther, at this early date, was a driving force in raising the funeral profession in the county.

He retired in 1896 and his business was operated by his two sons, Rudolph and Albright. Albright sold his interest to Rudolph in 1910 and the business was known as "R. Walther." Rudolph died in 1912 and Albright returned to the firm and the name was changed to Walther Furniture and Undertaking Co.

(In December 1977, the purchase of Walther's by Tom Boudinot and his son, Tom L. Boudinot, both of Jackson, was announced. In 1983 Brinkopf-Howell Funeral Home purchased Walther's, operating the two businesses separately. Both operations were sold to Ford and Sons Funeral home in 1988.)

Al Brinkopf was another man in Cape County (who) knew the need for the funeral director. He established a furniture store and funeral service which was known as the Brinkopf Furniture and Undertaking Co. in 1906. In 1923 Mr. Brinkopf built the funeral home at 536 Broadway. It is said to have been the first funeral home built for the purpose of funeral services between St. Louis and Memphis.

Miss Erna Brinkopf, daughter of Mr. and Mrs. Al Brinkopf, the first lady to become a licensed embalmer in this county, married Joe G. Howell in 1930. The name was changed to Brinkopf-Howell Funeral Home.

The Sparks purchased property at 426 North in the late summer of 1939 and after extensive repairs and alterations moved into this building October 1939.

Mr. Sparks died May 21, 1956, and (his widow) Mrs. Louise Sparks operated the business alone for over 10 years. Sept. 22, 1967, Mrs. Sparks incorporated with W.D. Purnell and Charles R. Williams, a licensed embalmer, and operates funeral homes here and at Charleston.

(The 1976 write-up fails to mention that Sparks Funeral Home catered to the needs of the African-American community. Mrs. Louise Sparks, Frank's widow, later married Omaha Milner. At the time of her death on Jan. 16, 1986, at age 92, she was still active in the management of Sparks Funeral Home, according to her obituary. )

The Lorberg Funeral Home was started November 1910 and (was) known as The Haarig Furniture and Undertaking Co. The establishment was located at 635 Good Hope, owned by Martin G. Lorberg and Josha Anderson.

Mr. Lorberg purchased the interest of Mr. Anderson in 1911. At first caskets were sold and in 1912 E.P Thomas was employed as an embalmer. Mr. Lorberg brought the first ambulance to Southeast Missouri,a horse-drawn vehicle, in 1913.

A new building was erected in 1920 at 215 S. Sprigg for his business, now named the Lorberg Furniture and Undertaking Co. Mr. Lorberg was licensed as an embalmer about 1916.

The Lorberg Funeral Home, 433 S. Sprigg, was started in 1928. Carlton J. Lorberg joined the business, with his father, upon graduation from high school in January 1930 and was a licensed embalmer before graduation.

Martin G. Lorberg died in 1958 and Carlton J. Lorberg purchased the property and remodeled it...

(Lorberg Funeral Home absorbed the Steinhagen-Haman Funeral Home, 107 S. Sprigg St., in 1969. Carlton Lorberg's widow, Amanda Lorberg, sold the company to John E. Carpenter and Bruce Dockins in 1987. Two years later, William H. Kuss and James A. Kuss became part owners of the company. In 2009 the funeral home was acquired by Illinois-based Crain Funeral Home, and the name of the company was changed.)

Mr. Haman was employed at Brinkopf Furniture and Undertaking Co. from 1912 until 1929. He attended the Armbruster School of Embalming, St. Louis. He operated a successful funeral home and retired in November 1967.

The funeral home was sold to (David L.) Steinhagen, who continued in the profession from 1967-1969, when the business closed.

Ford and Sons opened another funeral home in Benton, Jan. 1, 1957. the building has been remodeled on two different occasions and the size was more than doubled in 1965.

The new funeral home at 118 S. Sprigg was built in June 1957. A new chapel, seating 200, was completed in 1965. As their funeral home has enlarged, houses on either side were purchased and dismantled. In 1973 another major addition was added to the north side of their building. The entire funeral home will accommodate five families comfortably.

Harold Cobb, an employee, has been with the funeral home eight years....

(In 1977 Mr. and Mrs. Walter Joe Ford bought the interests of the family business from his brothers, Jerry and Donald K. In the fall of 1985 Walter Joe Ford and his wife, Iris, bought the 32-acre Cape County Memorial Park from the Strom family. Three years later, the family built a a mausoleum at the cemetery. It was expanded in 1992. As stated above, Ford and Sons acquired the old Walther's and Brinkopf-Howell operations in 1988. The company broke ground on a new funeral home at 1001 Mount Auburn Road in February 1990 and opened that facility in October of the same year. In March 2015 the company purchased Cracraft-Miller Funeral Home in Jackson, changing its name to Ford and Sons Funeral Home-Jackson.)

The first ledger of record for the year 1864-1866 shows Mr. Moreland owned the company. Caskets were made and trimmed. The families chose the trim, such as a rose, and it was tacked into the wood or box-type caskets.

In the late 1800s the company was owned by J.E. Schmuke and Henry Bartels and was located where McCombs is operating today (1976( at 116 S. High, Jackson.

J.W. McCombs purchased the business March 1906. On Jan. 15, 1929, the business was incorporated with Henry Boss, B.A. Meyer and Hope Morton as partners of Mr. McCombs. Later a branch store was established in Perryville under the name of McCombs-Pheiffer Furniture Co.

In an interview in 1936, Mr. McCombs said, "embalming was regarded as sacrilegious and when a body had to be kept for several days, ice was used. We had no church truck, just an ordinary bier; there were no lowering devices but caskets were let down with ropes. The horse-drawn hearse was the only conveyance used to carry bodies to the cemetery.

Kurre Allen, who had been working for the company, became a partner in 1943 when Mr. McCombs died.

In 1942, the company purchased the Presbyterian parsonage, 117 N. High, and the building was remodeled for a funeral home. From 1929 to 1942, funeral services were conducted from the furniture store and from family homes.

On April 19, 1971, McCombs Furniture and Undertaking Co. announced plans for a new modern colonial designed funeral home to be built on Route D, and it was formally opened Jan. 16, 1972.

(The furniture part of the business was sold off in in 1976, and the corporate name became “McCombs Funeral Home, Inc,” Grindstaff retired, and the business continued under the management of Bruce and Donna Dockins. A Cape Girardeau facility was opened in the fall of 1995.)

The Wessell Furniture Co. was organized May 16, 1917. John G. Heinberg was elected chairman, other members were Ben W. Schwab and William Wessell.

In the early 1940s MR. Cracraft and Mr. Miller acquired the stock owned by Mr. Allen and Mr. Lorberg.

On Jan. 25, 1944, they purchased what was known as the Joe Grant property to be used as the Cracraft-Miller Chapel.

The Wessell Furniture Co.'s name was changed to Cracraft-Miller, Inc., May 1944, and the stockholders were S.C. Cracraft, Bernice M. Cracraft, Gene C. Cracraft and R.G. Miller.

Construction was started May 29, 1970, of a new funeral chapel, adjoining the present funeral home, and work (was) completed (in) October 1970.

(As stated above, Cracraft-Miller was purchased by Ford and Sons in 2015.)

The Macke-Wilson-Howard Funeral Home was established in 1935 and operated under this name until 1937.

Macke-Wilson-Statler Funeral Home operated from 1937 until 1940.

Wilson-Statler-Seabaugh Funeral Home was in business from 1940 to 1947.

Seabaugh-Laird Funeral Home was established in 1947.

Deneke-Laird Funeral Home was established in 1951.