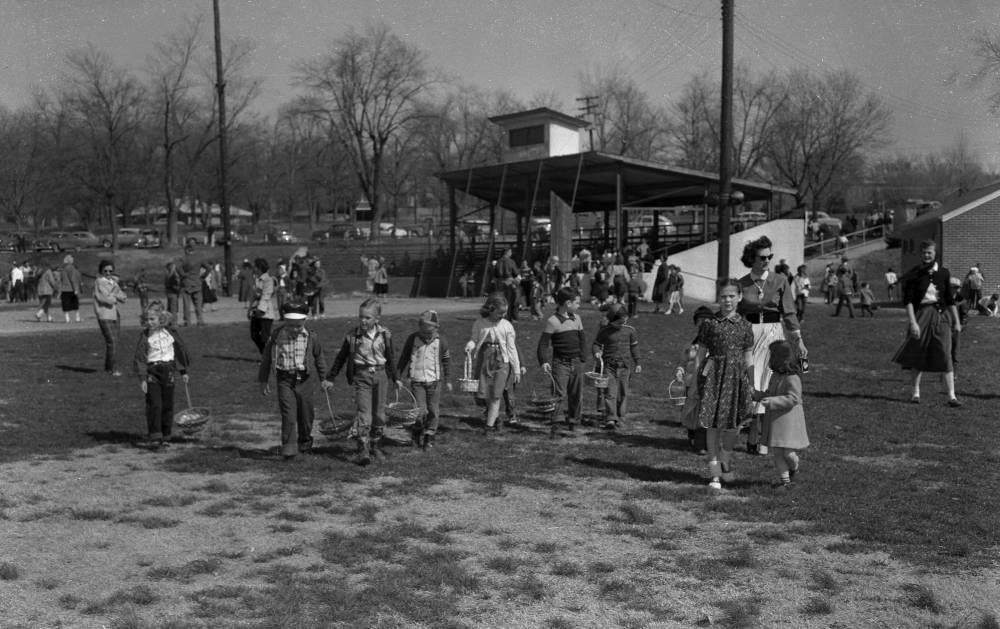 This photo published on Monday, March 26, 1956, shows just a few of the youngsters who participated in an Easter egg hunt at Capaha Park. (G.D. Fronabarger ~ Southeast Missourian archive)

Just when Cape Girardeau held its first organized Easter egg hunt, I've been unable to pin down. But the earliest record I have found of such an event dates to 1922, when the May Greene School pupils held a hunt on the grounds of Fort D.

For many years, Easter egg hunts were hosted by the Lions Club, but other organizations, such as the Jaycees and the Easter Seal Society, have also sponsored the event.

The locations of the hunts have also changed, with the majority having been held at Fairground (now Capaha) Park. In the days before desegregation, separate hunts were held for white and African-American children.

Many Disappointed as Crowd Breaks Through Ahead of Schedule.

What the Girl Scouts had planned for an Easter Egg hunt in Fairground Park Sunday afternoon for children up to 10 years old, turned out to be a grand scramble in which even grownups took party.

Forty minutes before the hunt was scheduled to start, an unauthorized youth in the crowd shouted, "It's time to go," and the search was on. Within a few minutes the grounds had been stripped of the hidden eggs, and the hunt was over. But, at that, it was lots of fun, even if disappointing and aggravating to those in charge.

Children coming to the park at 2:30 p.m., the time at which the event was scheduled, had to be turned away disappointed. Fathers of the Girl Scouts, patrolling the drives, were helpless to stop the in-rushing throngs; ropes put up to divide the park into four sections so that smaller children would not be competing with the older ones, were torn down; all the rules the Girl Scouts had planned were disregarded.

Approximately 1,500 persons, children and grownups, took part in the hunt. Several hundred other children came to the park after the excitement was over.

At noon, the crowd already was beginning to gather. By 1 p.m., when the Girl Scouts reported to hid the eggs, the drives were full. As the plan was to have the hunt immediately after a drill by the Girl Scout Drum and Bugle Corps, members of the Girl Scout Council asked Frank Lowry, city attorney, to announce the plans for the hunt. He was to explain in which section children of certain ages were to hunt for eggs and announce the signal for the starting of the hunt after the drill. While he was talking, the impatient young man in the crowd called out and started the stampede.

Parents went in with their children and searched as diligently as the little folks. Young people many years above the 10-year age limit set surged into the hunting ground and snatched up the eggs before the confused children could get their bearings.

Some eggs had been saved so that those children who did not find any were given a few Easter eggs. None remained, however, for those who came at the scheduled time.

After the stampede was over, the Girl Scout Drum and Bugle Corps gave a half-hour drill, directed by Dorothy Flentge, the drum major. This was the corps' first public appearance since it reorganized with Billy Strain as instructor, early in the year. Eighteen girls took part in the drill. Twenty-five others helped with the arrangements for the hunt, and several members of the Girl Scout Council were present.

At Missouri Park, where the Girl Scouts sponsored an Easter egg hunt for Negro children, everything went off to schedule. Approximately 180 children hunted for the eggs which the Girls Scouts had provided, and as many more pupils stood on the sidelines and watched the youngsters frolic. Professor W.B. Longdon and Miss Leona Williams of John Cobb School had charge of the arrangements.