Most of this series of articles about Judge I.R. Kelso reflect on his support of Southeast Missouri State University, historic preservation and the city of Cape Girardeau in his dealings with the Frisco Railroad and the utilities company. But Kelso was also a supporter of the arts, especially music.

This article reviews the aid he gave to the Golden Troopers Drum and Bugle Corps. It also begins the process of winding down the series. It offers one of the finest tributes to a community leader that I've ever read:

"The record shows without question of doubt that from the time he moved to the town as a young lawyer determined to make good, he never quit, he never hesitated, he accepted every challenge, he disagreed with people but never got vindictive..."

Next week's blog will contain the final article in the Kelso series, and it will deal almost entirely with his work toward a Mississippi River National Parkway and the Trail of Tears State Park. 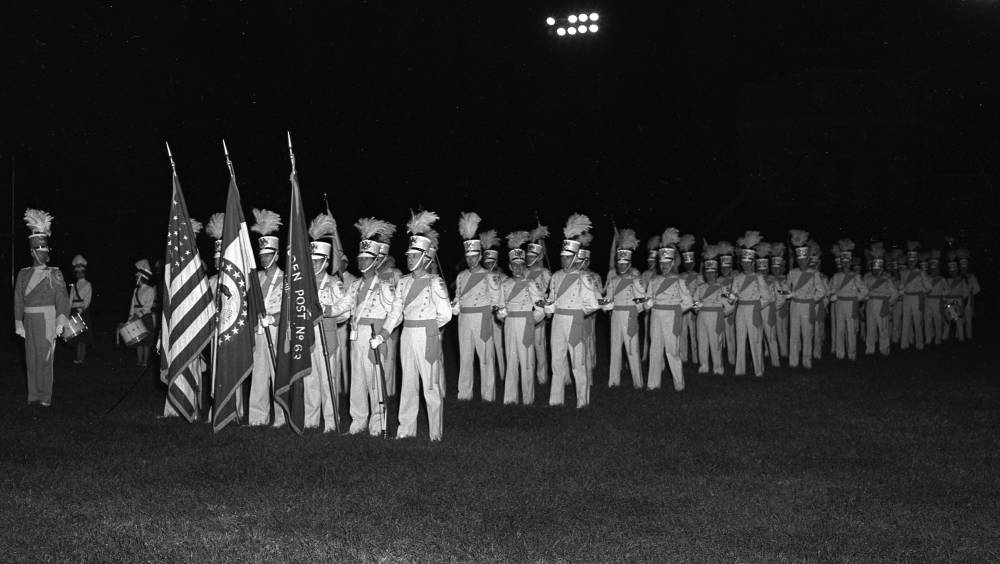 Mr. (I.R.) Kelso was interested actively in so many different community affairs that it would be impossible to list them all, so with the addition of a few more comments, the series will be closed.

Although he seldom mentioned music or dramatic affairs, or even athletic activities, he was a strong supporter of them all. But he seemed to favor music, such as the local Symphony Orchestra and the Golden Troopers of the American Legion Post. He gave liberally to the orchestra and support it in other ways. Years ago the girls at Central High School organized a drum and bugle corps and showed much interest in it, but there was no money for equipment. A $400 check from Mr. Kelso had a fine effect.

Last October the Golden Troopers were all set to go to the national contest at Miami. They lacked but one thing. Their drums were good but archaic. Mr. Kelso sent a check and the drums were ordered by telephone. There was sufficient money left for other things, and everybody was happy. Then Mr. and Mrs. Kelso sent word they would go along. When the troopers were ruled out, the Kelsos joined with others and invited the 90 dejected Girardeans to a breakfast they will never forget. It was the last trip for Mr. Kelso and the last social engagement of his life.

As a member of the committee for the restoration of Old Lorimier Cemetery, Mr. Kelso employed a distinguished St. Louis landscape architect to advise how to proceed.

The Kelso family were strong members of the Disciples of Christ Church (Christian Church), and having furnished the present church house more than 40 years ago, he was expected to have a part in the present undertaking for a new building out on North (West End) Boulevard.

It would be possible to continue the comments on the activities of Mr. Kelso indefinitely, but enough has been said in this sort of review of early Cape Girardeau to suffice for the time being. At the beginning it was explained that the idea was not to overly praise a citizen, but the passing of an unusual and useful civic leader furnished an opportunity to comment on the building of this city in a way that might be helpful to the present era.

Where is there a community of this size that has even one man who gives much of his time to helping his city with a view of making it a more attractive and a better place to work and live? Surely no Girardean who has been active in community affairs for even a quarter century will say that Mr. Kelso was not unusual in this respect.

With such a challenge before us, one wonders if the Cape has a citizen to carry on. One wonders if the Cape is progressing as it did back about 1927 when the traffic bridge was built, when the Marquette Hotel followed and so on. Who is there in Cape Girardeau that is interested in seeing that William Street is made a modern thoroughfare from the river to Kingshighway? City Engineer Walther has often declared publicly that this is, in his opinion, the most important permanent project that has been before the community in a long time.

Or, what difference does it make what kind of flood protection the government provides for Cape Girardeau? The idea of the government engineers so far has been to keep the floodwaters out at the least possible expense.

Or, what difference does it make if the Public Library building in Courthouse Park is torn down and the books moved into some quarters not intended for the purpose?

Or, what difference does it make if old Common Pleas Courthouse is torn away, especially after more than $3,000 of patriotic money spent last year on beautiful signboards along the highways advertising Cape Girardeau as an historic old town?

Why bother about Cape Rock Park?

Who's interested in making Ten-Mile Garden truly a boulevard unsurpassed in the United States?

Why lose any sleep over the future of Old Lorimier Cemetery?

Finally, who is there in Cape Girardeau to take up the cudgel for the future cultural welfare of the town?

Mr. Kelso had given his first attention to every one of the above problems. Many citizens didn't always agree with him, of course, and some fought his efforts, but Mr. Kelso never quit, he never even faltered. He evidently believed that where there is a will to do, there is a way to be found. Wherever there is vision, the community will not stand still or slip back.

The record shows without question of doubt that from the time he moved to the town as a young lawyer determined to make good, he never quit, he never hesitated, he accepted every challenge, he disagreed with people but never got vindictive, he never showed a sign of trying to profit personally through civic endeavor.

This series of articles was intended as a challenge to all citizens to wake up to a realization of what has gone on in Cape Girardeau in the past and what must be done if the town is to continue going forward.

Mr. Kelso needed no exaltation from this newspaper.

His record, his value as a citizen of Cape Girardeau will grow in esteem with the years, just as the activities of Mr. (Louis) Houck, Mr. (M.E.) Leming, Mr. (D.A.) Glenn and others have grown.

The Missourian, in the name of the loyal citizens of the town, hopes that others will step it to serve as Mr. Kelso did, so that it may feel in duty bound to extol them when they have concluded their work on earth.

The final article of this series will speak of Mr. Kelso's favorite hobby, how he became so greatly interested in it, and the great satisfaction he got out of it. With this article will be a large picture which Mr. Kelso had hoped to see in print, but as an appropriate occasion for its publication had failed to materialize, it is now published as a sort of memorial to his remarkable career in tomorrow's paper.