Judge I.R. Kelso's last big campaign as a State College regent was the location of a new athletic building to replace the original Houck Field House, which burned on Feb. 17, 1948.

Just as he did with other building projects, Kelso again suggested the "Home of the Birds" as the site for the new structure, even enlisting the opinion of renowned city planner Harland Bartholomew. Despite his efforts, Kelso again lost the battle, and new Houck Field House rose from the ashes of the old. 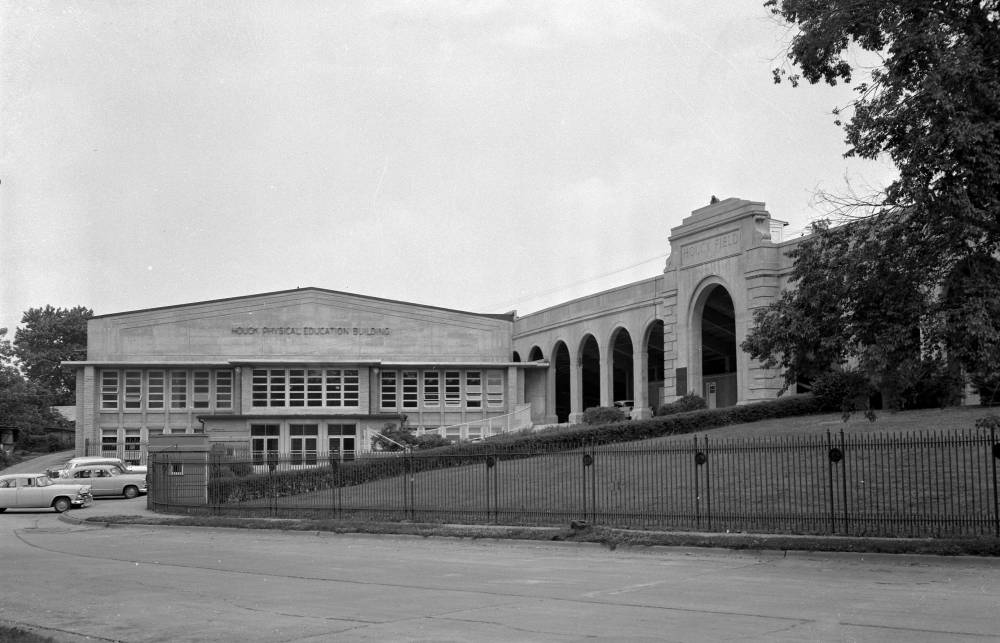 A new Houck Field House was constructed at a cost of $500,000, after the original structure was consumed by fire in 1948. (G.D. Fronabarger ~ Southeast Missourian archive)

When the matter of selecting a site for the $500,000 athletic building, the first half-million dollar building to be erected on the campus, was taken up by the Board of Regents, Mr. (I.R.) Kelso insisted with renewed energy, if possible, that it should be placed in the "Home of the Birds" in order to have ample space for continued development. He said he had pledge the legislators that facilities for women would be provided equal to those for men. The women were demanding an open swimming pool and other things, and they meant what they said, he argued.

But, it seems, the other Regents were in favor of placing the new building on the site of the old one, and so it was officially decreed, but not until Mr. Kelso had secured from the Board unanimous consent to have Harland Bartholomew, distinguished city planner and highest authority on locating buildings, make a survey of the entire College campus, including the "Home of the Birds," the College farm, the Houck Stadium property, and the Field House site, and recommend the best location for the new athletic plant.

Mr. Bartholomew and his associates did the work promptly and presented their findings in an illustrated pamphlet covering every detail. From reading the pamphlet it may be assumed that parking space was given first consideration. Every such detail was measured and considered. It was found that a site north of Academic Hall, in the "Home of the Birds," would be lose or closer to Academic Hall and could be reached more easily than the old site.

A standard road or street could be built through the "Home of the Birds" from North Sprigg Street to Henderson Avenue at moderate cost; only a small tract of land would have to be bought; cost of grading an immediate parking surface for 1,000 cars would be $1,000; all utility facilities were available.

Two sites in this sector were evaluated in detail. The first one, considered the best for long range use, was favored. It would be located on a new street extending from North Sprigg Street to Henderson (Avenue). The second choice was a site on Henderson Avenue adjacent to the present tennis courts. Footage was considered ample even for future expansion, but land would have to be acquired for parking space. The third choice was the old site, which was considered inadequate for about every requirement for a permanent building intended to grow with the College.

Upon receipt of the Bartholomew report Mr. Kelso urged its close study and consideration. He related thereafter that only one question was asked of him, which was something like this: The report shows that the College will have to acquire additional property if the report is followed. How could this be done? Mr. Kelso related at different times that his reply to the question was that if any of his property was needed the College would have no trouble acquiring it.

Mr. Kelso reported that the Board made no detailed study of the Bartholomew report but voted to place the new building on the site of the old one.

By reducing its size and by using every inch of space owned by the College, the new building was erected at a cost of $500,000.

When Mr. Kelso came to the newspaper to relate his story, he filed a copy of the official Bartholomew report, which is available for inspection. Asked if he would take any action to force a general discussion of a proper site for the new building, he said he would not; that he felt he had done his part for the future of the College, and would go no further. He said he was granted the privilege of filing a written report of his position for the official record and later he said he had filed his report and had received from the secretary a copy of the minutes containing it word for word.

When Mr. Kelso's second term was up, Gov. Forrest Smith appointed a citizen from Dunklin County as his successor and thus his career as a Regent of Southeast Missouri State College came to an end.

But the fact that he was not retained on the Board seemed to have no effect whatever upon him. He went to the College frequently to social affairs and as he had the usual faculty of never showing pique, no matter what happened, he seemed to respect those who disagreed with him equally with those who did.

In respect to his memory shortly after his passing, the State Senate unanimously adopted a resolution in which it was said "he served the public as an attorney and counselor of law for more than 50 years and was highly respected throughout the state... He willingly and unselfishly gave of his time and his talents to many civic as well as political organizations... In the death of the Honorable I.R. Kelso, Missouri has lost a most outstanding and capable citizen..."