The past few articles concerning the life of Judge I.R. Kelso show that he was a great supporter of the State College, now Southeast Missouri State University. But he was also active in other civic causes, such as the preservation of Common Pleas Courthouse and flood control for downtown Cape Girardeau. 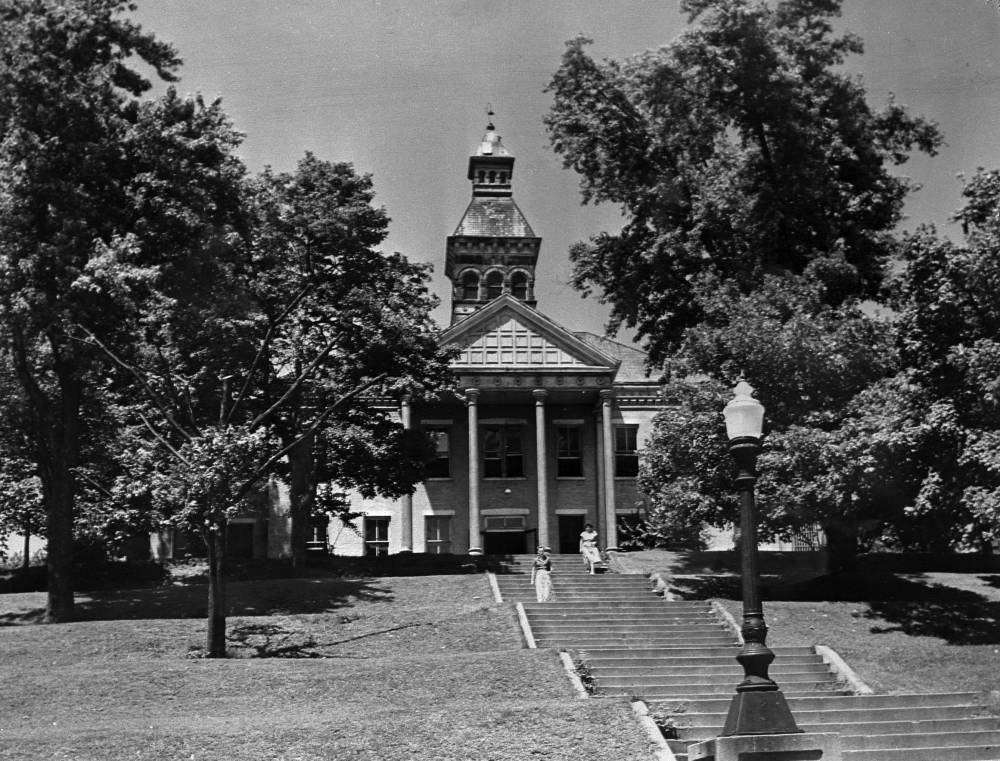 Years of neglect are visible in this photograph of the Common Pleas Courthouse, probably taken in the 1950s. With the destiny of the courthouse in the hands of the courts and the federal government, little maintenance was done on the historic building for over a decade. (G.D. Fronabarger ~ Southeast Missourian archive)

It might be well to say that Mr. (I.R.) Kelso did not devote all his spare time to the State College, although his 12 years' service on the Board of Regents kept him busy and permitted him to do many things for the permanent benefit of the fine institution.

Perhaps the public service that brought him the most public attention was his persistent activities to prevent the city from swapping Common Pleas Park and Courthouse, including the Public Library building, for the present Federal Building. From the beginning it seems that things went against Mr. Kelso, the main cause, he often said, being that not an organization or a citizen stood out with him to indicate that he was not alone, and not an organization or person appeared in court to indicate that he was wrong in opposing the plan of getting rid of the historic property.

Mr. Kelso lost his legal procedures in both the state and federal courts, not upon the basic facts, he contended, but because of technicalities and the failure or refusal of city authorities to take a positive stand one way or another.

Last October or November Mr. Kelso discussed the status of the litigation with some local friends who had supported him, and he left the impression that as a last resort he would go into the State courts again and insist that the city had no right to swap the property away or give it away. It is not now recalled upon what basis he expected to proceed.

He had gone to the federal authorities to ascertain what would become of the present post office building if the government should decide not to make the trade and would erect a new building upon a new site. He said he found the agency that would have charge of the old property and was told that if the government didn't want to use it in some other capacity it would be advertised for sale. If the city could show that the property would be of much use to the public and that it would always be used in public service, it could be bought at a reasonable price. Or if the city could show that the property was greatly needed and that it was in no position to pay for it, the government might be persuaded to give it to the city without cost. Such deals were on record, Mr. Kelso said he was told.

A Missouri city about the size of Cape Girardeau desired the old federal building that was displaced by a new one and dickered with the government agency, showing that it was not financially able to build a new building. Finally a deal was made for a few thousand dollars, Mr. Kelso said.

The government building in Jefferson City was handled similarly by the State. After long dickering the State bought the building for about $100,000, a large price many local citizens said, because the government had to pay more than $100,000 for a new site that most everybody said was the largest price ever heard of for property in that city.

Mr. Kelso said he asked if there was anything in a previous official report that the building in Cape Girardeau was valued, for sale prices, at "about $18,000 to $22,000" and was told by the government agent that he had not heard of such a quotation but "it might have been about right."

Evidently Mr. Kelso expected to go into the state court to show that very valuable city property was about to be traded for government property of small marketable value, and that such a trade would fall heavily upon the taxpayers. Friends in Cape Girardeau are now of the opinion that there will be no more activity in the matter.

Throughout the controversy over flood control Mr. Kelso showed no particular interest, which caused comment. However it was known by river engineers and local citizens directly interested in control that Mr. Kelso was strong for what was known as the Erlbacher Plan conceived by Eddie Erlbacher. The two men were known to have conferred often on the subject.

It was believed by many that Mr. Kelso was biding his time so as to strike hard when the engineers were making their final plans. He was known to have conferred with the engineers in Washington, and late last fall, after Congress had set aside $100,000 for a complete survey or study of the entire project, he had a retired Army engineer come to Cape Girardeau to look into the matter. Later Mr. Kelso remarked to friends that as he had long been active in the effort to build a scenic highway from St. Paul (Minnesota) to New Orleans, and as such project had finally been approved by Congress, he wanted to do everything he could to have the flood control plan made so it could be featured as an available sector in a national scenic highway. He often explained that he would indeed be distressed if such a highway were built away from Cape Girardeau rather than through it.

Very often Mr. Kelso remarked publicly that he wasn't giving much time to flood control as such, although he owned considerable property along the river. It it would only fit in with the plans for the scenic highway he would be satisfied. But he deplored the floods and said he never went to Washington that h didn't urge flood control as a major emergency measure, and he also aid he had called on and discussed the importance of immediate control for Cape Girardeau with the committee of Senators who came to this city during the 1951 flood on a personal inspection trip. "When the time comes I feel sure we can get the kind of flood control we want if we but demand it," Mr. Kelso told this writer shortly after visiting the senators in Washington.

Back in 1929 when the depression was at its height and banks were going out like popcorn in a popper, the four banks in Cape girardeau had simmered down to two, and people were scared to death over their financial affairs.

Mr. Kelso was then living in St. Louis, but was in Cape Girardeau much of the time. One night he answered the telephone and heard that it was imperative for him to bring $30,000 in cash at once. He was on hand with the money in due time, but was then told that it would take twice as much money to save the situation.

After a conference with the bankers, Mr. Kelso called a moving picture man who was then active in Cape Girardeau and after the situation was explained, according to the reports at that time, the picture man said that under the circumstances he could do no less than follow the lead of Mr. Kelso.

The $60,000 in cas was laid on the barrel head and from that day on the banks of Cape Girardeau have been as strong as granite.

The report was that both men accepted bank stock for their money and eventually both became members of the Board. When the storm was over, Mr. Kelso advised the bank that he wanted to sell his stock for what he had paid for it. He got it at par and he would sell it for par. He was told that the stock was then worth much more than par, but he ordered it sold in small amounts at par to patrons of the bank who had stood by it faithfully throughout the trouble. "I'm no banker, and I don't want to worry over it," was about all the explanation Mr. Kelso offered.

The picture man, no longer in the business, still owns his stock, it is said, but has not assumed any of the managerial responsibilities...