Judge I.R. Kelso served on the Southeast Missouri State College (now University) Board of Regents during World War II, some of the most difficult times the institution and this country faced.

The next article about his civic legacy deals with his efforts to bring a Navy V-12 unit to the campus. It also tells the story of a new Houck Field House rising from the ashes of the old. 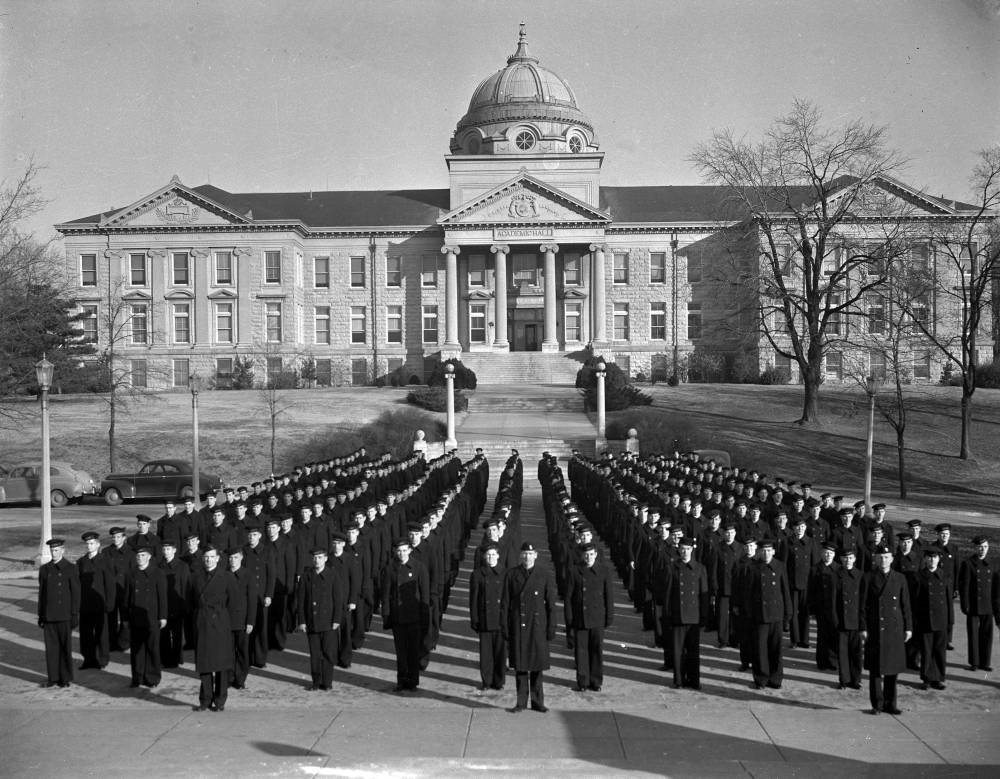 It is believed this photograph was taken in the winter of 1943 and shows a portion of the 335 apprentice seamen who made up the Navy V-12 training unit at the State College. (G.D. Fronabarger ~ Southeast Missourian)

Mr. (I.R.) Kelso, in relating his experiences on the College Board (of Regents) said about the first big job encountered was the securing of a Navy V-12 training unit. It seems that some colleges looked upon such work with misgivings and were slow to act. Also it was questionable if the College had all the necessary facilities to successfully take on a large number of boys for specialized work. Anyway the matter dragged along until it seemed that the Cape would not get in on the war work.

Then one day Mr. Kelso got a message from Washington just as he and Mrs. Kelso were leaving with friends for a vacation in Mexico City asking if the Cape was to be left out. Upon his arrival in Mexico the first thing he did after registering at the hotel was to start telephoning. His friends had long noticed that apparently he would rather telephone than do most anything else, so he kept the telephones busy, frequently telling his associates that he couldn't go sightseeing until he had attended to some business.

He telephoned to Washington, to St. Louis, to Cape Girardeau and probably to other places wondering why the Cape had not signed up for a V-12 unit. Finally word came that the College had secured a unit and everything was arranged. From then on Mr. Kelso had a fine vacation and then came the day of judgment, according to others in the party. When he asked for his hotel bill he was handed a telephone bill, the total of which was as great as his entire expense for the trip -- and he showed no signs whatever that telephoning from Mexico to the U.S. costs money.

The V-12 Unit came, to the general satisfaction of the community and to the everlasting credit of State College. Then followed a building program that will never be forgotten.

Although the enrollment at the College had declined somewhat due to so many young men being called to service, there was a growing need of living accommodations for students. Also at the time the legislature made it possible for state institutions to get additional buildings through revenue bond issues. So Mr. Kelso insisted that a building program be started regardless of the difficulty of carrying on construction work, and it wasn't long until plans for more than a million dollars for new buildings had been perfected.

Deciding that the terrain of the "Home of the Birds" was too rough and that it would be better to have the buildings closer together, the Board finally decided that the dormitory should be placed on a hillside south of Kent Library.

The same difficulties arose when the Board selected a site for the student center. Mr. Kelso again argued that it should be placed in the "Home of the Birds," but finally the Regents decided to put it close to Academic Hall. One of Mr. Kelso's main objections to the sites selected by the Board was that no parking space would be available. To the very last, he often remarked, he insisted upon ample parking space for all buildings to be supplied by the College.

Mr. Kelso also stressed his opposition to placing any other buildings in the half circle originally laid out for the exclusive use of Academic Hall, claiming that once the bars were let down other buildings would follow and then the main attraction of the campus would be lost.

Due to war conditions, the Board had much trouble getting the two new buildings built up to specifications, and again Mr. Kelso was persistent in declaring that the College would not tolerate inferior material or workmanship. Time and again he complained of the work in the dormitory, and frequently demanded a showdown, but apparently it was more difficult to get the student center building, which was designed to be the most attractive unit on the campus, erected according to specifications than the dormitory building.

At one state Mr. Kelso is said to have secured the active aid of Attorney General J.E. Taylor in requiring the contractor to carry out the details of the architect's specification, even going so far as to require the contractor to give a large bond guaranteeing that he would correct all defects and would deliver the building to the College to the full satisfaction of the architects and the Board of Regents. This was such an unusual procedure that after the matter had been concluded, Mr. Kelso was commended on the floor of the State Senate for his determination to protect the best interests of the State, a proceeding that had seldom if ever been heard of before.

This Student Center, officially named Memorial Hall in honor of the many students of the College who had gallantly served their country, is considered the gem of the campus. At the recent district convention of the Kiwanis Clubs held in Cape Girardeau, the secretary of the National Board of Directors remarked in his address that "this is certainly one of the loveliest banquet rooms we have ever seen, as well as one of the finest dinners ever spread before us." Memorial Hall is the pride not only of the College, but of the entire College district, it is often remarked by guests.

Then came the final test of Mr. Kelso's interest in the College. Fire completely destroyed Houck Field House, the only place in Southeast Missouri where district-wide athletic contests could be accommodated. Fortunately Cape Girardeau had its Arena Building available, a much larger and better building for some activities, so the College was able to continue, at least temporarily to serve its district in even a better way.

[Note -- President Joseph A. Serena had build Houck Field House out of scraps collected near and wide, with contributions of cash and labor, the largest contribution being the lumber used in the Billy Sunday tabernacle. A committee headed by M.E. Leming and Mr. Kelso had been trying to find a way of using the lumber for the good of the community and President Serena solved their problem by showing how he could build a large Field House if he could get the lumber. The building, erected shortly after the Billy Sunday campaign in 1926, was valued at $100,000, and the State had ever appropriated a cent for it.]

Before the fire had died out Mr. Kelso was busy for a new building to meet the needs of the College and all Southeast Missouri. The Legislature was soon to adjourn and most all appropriations had been made. When Mr. Kelso declared that a half million dollars would be needed to get an adequate building started, most community leaders were apprehensive, and when it became known that such a large amount had never been given any State College for such a purpose, the general impression was that if such a large amount was asked for the Legislature would "lay the matter over" and nothing would be done.

It was reported that some members of the Board of Regents favored asking for $200,000, city officials were reported favoring $200,000, but Mr. Kelso held his ground. He opened headquarters in Jefferson City; he immediately contacted Senators (L.D.) Joslyn and (John W.) Noble and after hearing his story, they agreed with him and got busy; Senator (Michael) Kinney didn't wait to be called in, Mr. Kelso often remarked, and he agreed that $500,000 should be the minimum.

Representative J.S.N. Farquahar of Cape Girardeau County was on hand, as usual. At first he feared asking for such a large sum, but when he learned that the Senators had agreed, he began buttonholing his colleagues and a few days later a fund of $500,000 was passed without a dissenting vote.

The senators and several representatives in thanking the legislature praised Mr. Kelso for his intelligent and pleasant work in behalf of a fine state institution...