Judging from the Missourian articles about the life of I.R. Kelso, his work as a regent of Southeast Missouri State College was all consuming. Apparently the acquisition of new property for the growing institution was one of Kelso's top priorities. 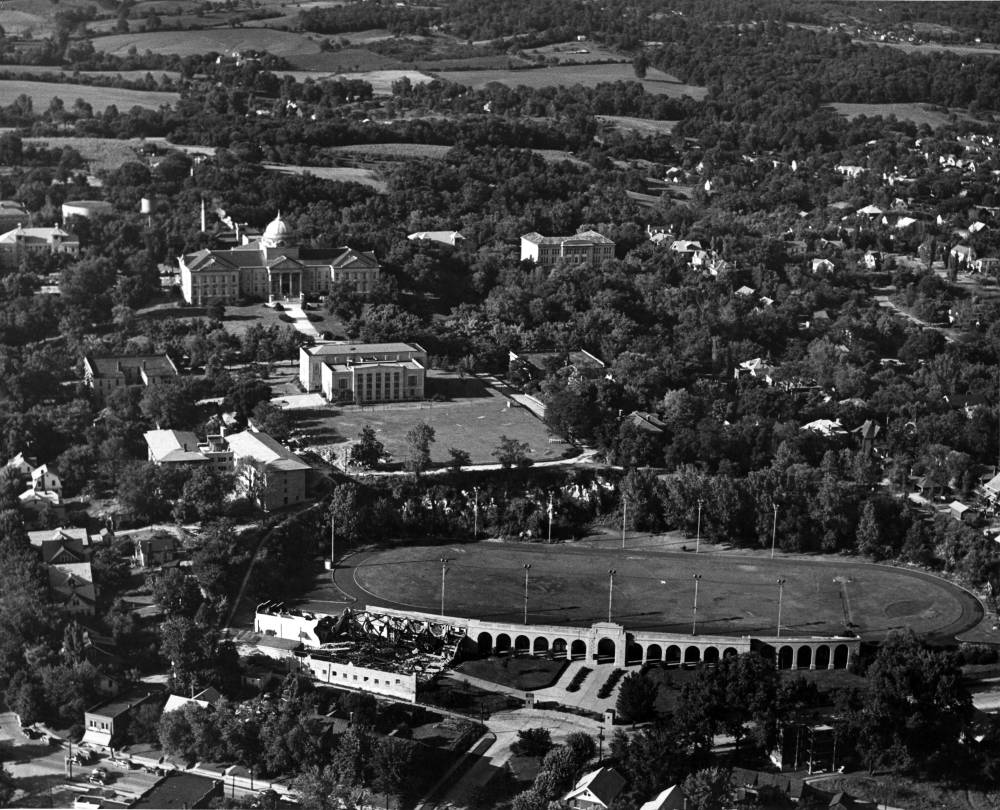 G.D. Fronabarger likely took this aerial of the State College campus in 1948, the year that the original Houck Field House was destroyed by fire. Note the burned ruins of the building in the lower part of the photo. (G.D. Fronabarger ~ Southeast Missourian archive)

During the last years of his life it was often remarked that Mr. (Louis) Houck went to the College nearly every day he was in town. He lived seven miles out in the country and didn't drive in when the weather was severe. The College plant was his hobby, and his life. He didn't bother much about the educational status, but he knew much about it and had strong convictions.

Mr. (I.R.) Kelso seldom missed a day going to the College when he was in town, when the weather was possible. He, too, lived out in the country and he also retained and office and a law partner in St. Louis. It is now know than he devoted the last two or three weeks, 12 to 18 hours a day, to a call from a St. Louis financial friend for help. A big merger was being completed and the time came for the big men in the venture to sign on the dotted line. One of them hesitated. He wasn't fully satisfied. He had been on a board that brought him in close contact with Mr Kelso.

Finally, he asked for more time and went to Mr. Kelso for advice. Dropping everything else Mr. Kelso went into and did nothing else until he wrote his opinion. Then the financier went back to the business and announced what he had done and stated that he was ready to sign. One of the other men who signed that day related the incident to this writer as he spoke of the passing of Mr. Kelso. "The president of our institution remarked that he had learned through long experience that it was safe to sign anything that Mr. Kelso would sign first." Mr. Kelso gave the College the same kind of service.

This was the last call for legal assistance Mr. Kelso answered. The strain of this ordeal wore him out and he went to a hospital for rest.

After assuming a place on the Board of Regents in 1939 Mr. Kelso evidently began to accumulate the land Mr. Houck and President Serena had cherished so what those two failed to get Mr. Kelso nearly finished up in 1951. Likely Mr. Kelso then figured he had only three more moves to make.

Long before Mr. Kelso had any idea of becoming directly interested in the development of State College, he bought a considerable frontage of the original L.R. Johnson fruit orchard facing on Henderson Street north of the Johnson residence. He had in mind the building of a residence there. Later he acquired more of the Johnson land and wished to buy the Johnson home but Mr. Johnson would not sell. Mr. Houck and President (Joseph) Serena had tried by every means to get Mr. Johnson to sell the balance of his property to the College, but he wouldn't budge.

Because of its high elevation and location, real estate agents say it is the most valuable property of the kind in the city. It was this property, which at that time contained only the Johnson residence, that Mr. Houck and President (W.S.) Dearmont were so ambitious to bring into the College campus, and when Dr. Serena came in as President he at once set about aiding Mr. Houck to get possession of it. Messrs. Houck and Serena hoped they would see the College plant extended north through the "Home of the birds" and when Mr. Kelso came into the Board his first efforts were in this cause.

Failure of Mr. Houck and others to acquire the Johnson property, or even parts of it, never seemed to discourage them, as the following experience illustrates:

The late Professor John H. Gehrs, head of the department of agriculture, convinced Mr. Houck that the College needed a farm for experimental work and suggested a large tract of very rich soil in South Cape that could be bought at a low price. As soon as it became known that the College was expecting to buy a farm, the late Julien N. Friant, then in the land business in Cape Girardeau with Mercer D. and Joe Wilson, offered a farm north of the College and partially facing on North Sprigg Street,.

Professor Gehrs spurned the Friant offer and so advised the members of the Board of Regents. The farm he favored was rich and would grow anything while the other one was completely worn out and rough.

Friant agreed his land was poor and rough, but it laid well, it was close to the College and might some day be needed as part of the campus.

During this spirited contest, Mr. Houck called in Mr. Kelso to examine the titles and otherwise advise with the Board. He explained the two pieces of land and his report showed that the Friant bid was the lowest per acre, and stressed that it deserved careful consideration because it adjoined the College property.

Dr. Joseph A. Serena was then the College president and contended that any land bought should be adjacent to the College. The fact that the Friant land was poor would create a challenge to Professor Gehrs, he argued, because one of the first obligations of the agriculture department was to teach students how to make a crop on poor land, and that they needed to know how to transform poor soil into rich soil.

Closing his argument before the Board, President Serena elaborated on the importance of having just ordinary land close to the College, predicting that eventually the College would need the farm land for many purposes and the Board should start getting it while it had a chance.

The Board voted unanimously to buy the Friant land and put it up to Mr. Houck and President Serena to find the money. As these two men never hesitated to buy anything that the College was really in need of, the closed the deal. Then Mr. Houck asked President Serena, as usual, to hunt up some money somewhere, and years later it was reported that the President of the College, being unsurpassed at the business of getting money regardless of the source, had wheedled it out of the President of the Board.

Be that as it may, Mr. Kelso was always in the thick of the drive when such work was at hand, always ready to lend a hand. So he drew up the papers of the College Farm and stood by President Serena through the financial storms that followed....