The article about Striegel's appointment gives a brief overview of Kelso's time on the board:

"Judge Kelso, who was first appointed in 1939, and reappointed in 1945, has been active in the new building program and served as chairman of the building committee of the board during the period when the dormitory, Myers Hall and the student center, Memorial Hall, were built.

"Following the destruction of the former Houck Field House in February 1947, Judge Kelso spearheaded a movement that resulted in the appropriation of $500,000 by the State Legislature for the construction of a new physical education building, now nearing completion." 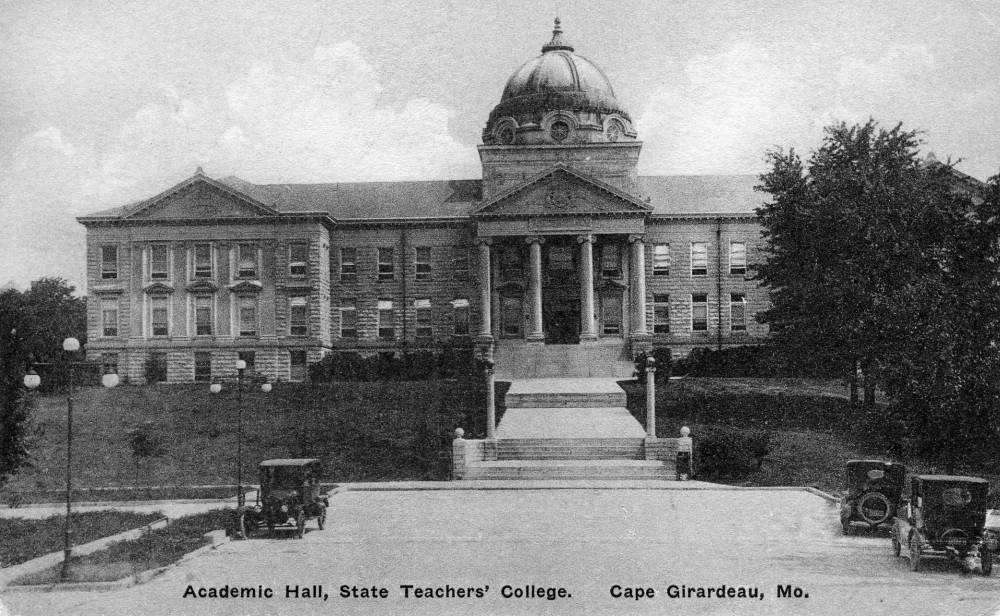 The next episode of consequence in the public record of I.R. Kelso covers his two terms of six years each as a member of the Board of Regents of Southeast Missouri State College in Cape Girardeau As Mr. Kelso was not tied down to a daily grind in his own personal affairs he had ample time to spend on the college duties.

His long and intimate business associations with Mr. (Louis) Houck gave him an interesting insight into the past, present and future development of the fine institution. When the going was hard in the purchase of a tract of land for a college farm, Mr. Houck sent for Mr. Kelso. One of Mr. Houck's greatest pleasures was to dote on the fact that the State had never contributed a cent to the purchase of (college) land. Before he retired from the board (after 39 years as a member and chairman of the board), he had seen the campus grow from 10 acres to 200 acres. And it was often related that this was the only State College that could say as much.

Mr. Houck was a builder, He was always anxious to be adding more land and buildings to his own estate and also to the College, and in his later years he used Mr. Kelso in this behalf. To begin with Mr. Kelso's original ambition in Kennett (Missouri) was to practice law while his partner's (Senator T.R.R. Ely) ambition was to practice law and buy land as rapidly as possible. When Mr. Kelso came to Cape Girardeau it seems that his associations with Mr. Houck and Mr. (M.E.) Leming soon inoculated him with a desire to be a builder and this ambition remained with him to the last. So, no sooner had he taken a place on the College Board than he wanted to see the institution expand.

When the original College building burned in 1902 it cleared the campus. The campus then was just one ravine and gully after another, with hardly a flat place on it. While waiting for a new building to be erected by the state, Mr. Houck got started on building a campus, even though the state had provided no funds for such work. He had long employed the late Major James F. Brooks as chief engineer for his railroad system. Major Brooks was an educated man and liked nature. So Mr. Houck ordered him to lay out a college campus.

The place was leveled off on top and terraced down to a grade with a wide roadway along the front from Pacific to Henderson streets. Then he laid out a roadway running through the campus in a half circle so vehicles might reach the buildings.

When the first three new stone buildings were erected they were in a straight line facing the semicircle. Then Academic Hall was erected in front of the row of three stone buildings, all facing south. The roadway separated the one from the three. With the completion of the road through the campus came the completion of the terraces on the east side of the campus and the sloping lawn on the west side, with great limestones outcropping. Elm and maple trees were set out, with a few pines close to the buildings. Mr. Houck often exclaimed the beauty of the campus, with the late President Dearmont agreeing that it should remain as it was with eventually as small lake and a water fountain at the east end serving as a welcome to all comers.

Then gradually came the development of Normal (Avenue), extending along the front of the campus, with the two driveways, with a parkway between them filled with new elms and maples. Some great limestone boulders marking the old Fort B were left and have historic tablets on them.

Then came the purchase (without state funds) of the old Schultz home overlooking the city from one of the highest points, and its eventual site of Kent Library building, which faces Academic Hall across the way. All of this was foreseen by Mr. Houck although no definite plans were left by him.

Mr. Houck was a busy man. While building his network of railroads through counties that old Iron Mountain management said could not be reached by "iron streaks," he got his recreation through gathering the data for his three volumes of Houck's "History of Missouri" and serving the State College.

A considerable acreage of ravines, hills, gullies, trees and brush north of the campus as it was then, an area that was considered worthless, was carefully studied by Mr. Houck, Major Brooks and President Dearmont, and finally it came into the fold of the campus. How that was done is not known, but certainly the State didn't appropriate a cent for it. The intention of these three sterling men was to gradually clean up the place and put it to use. Before long the "Home of the Birds" was announced and its praises were sung and illustrated in one of the early editions of the College Sagamore (yearbook). Paths had been built through it and every year its beauty and value was enhanced.

The intention was to building the College plant north through rugged terrain. It was agreed that the circular center of the campus should always remain with only Academic Hall in it, and that right along its beauty should enhanced. Because at that time Academic Hall had been pronounced by national authorities as being the largest education building on any State College campus, a world traveler had written in a Boston magazine that the loveliest campus in the United States, and he had seen most all of them, was in Cape Girardeau, Missouri, and later it was noted in a national architecture magazine that Academic Hall was the truest specimen of colonial education architecture to be seen anywhere. This circular keystone of the entire plant was intended to be an inspirational gem not to be excelled anywhere.

Thanks to the intelligence, the foresight, the great interest, the sacrifices manifested in the creation of a state educational institution that would draw the acclaim of the nation was the ambition of Mr. Houck, the chairman, Mr. Dearmont, the president, Major Brooks, the engineer.

Years of close business affiliation with the three men imbued Mr. Kelso with their characteristics. So when Governor Stark asked Mr. Kelso to serve on the Board of Regents he willingly consented to do so. He had the time, the means, the ability and the inclination to serve the public in such an important assignment, and the records show that he served without fear or favor, regardless of the time, the expense, or the personal sacrifice it required...