After publishing seven articles dealing with the civic legacy of Judge I.R. Kelso and other prominent early Girardeans, the Missourian took several weeks off before resuming the series on Jan. 14, 1952.

The eighth article dealt with efforts to preserve Cape Rock in 1919, a topic I wrote about back in 2012: http://www.semissourian.com/blogs/fromthemorgue/entry/45698 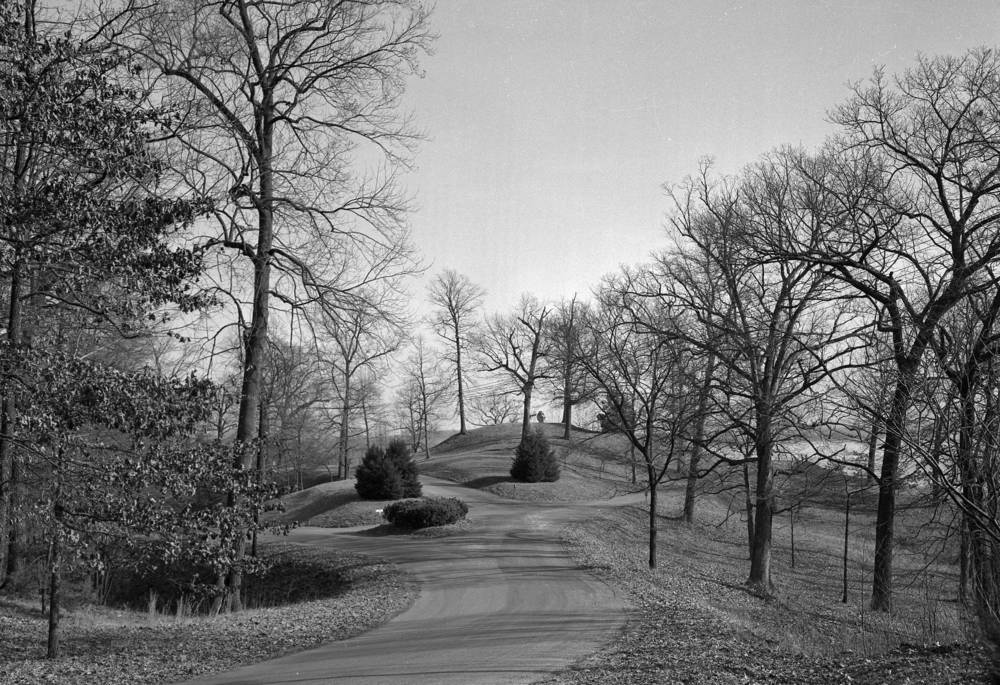 The historic Cape Rock property was saved from being divided into lots and sold off in 1919. This photos was likely made in the 1950s. (G.D. Fronabarger ~ Southeast MIssourian archive)

In renewing this series of articles, the first seven chapters having been published in the issues of Dec. 10-18 inclusive, the intention is not to laud one citizen, but to recite, for the benefit of those who had a part in the early building of Cape Girardeau, some of the important things that remain permanently of benefit to all citizens. Many citizens have let The Missourian know that they are preserving the articles in order to have the information at hand so it can be referred to later.

As an example, how ow did Cape Girardeau get Cape Rock, which is one of the most historical points on the Mississippi River? This is the starting point of much of the permanent history of Cape Girardeau made in this century.

Old St. Vincent's College owned much property in the north and south sections of Cape Girardeau, having acquired it long before 1900. Then it wasn't worth much. The north-end property was farm land and none too rich. The large acreage in the south part of town was mainly low, and usually was flooded every spring. But as the town grew the property increased in value.

However, the College didn't have much success in farming operations, especially in the north part of town, which was hilly. So in 1919 the College contracted with Bowman Brothers Realty Co. to sub-divide it and sell it off. Quite a few people rushed in to acquire choice lots at $200 up to perhaps $500, without paving or other facilities. Then the sale of lots slowed down and to keep up interest in the property the Bowman brothers set aside 10 acres overlooking the river on which was the eminence known as Cape Rock.

Before the railroad was built along the river a large ledge of rough limestone extended out into the water and as the land across the river was low, sandbars would appear in seasons of low water, making the river at this point very narrow, ideal for easy crossing. Under these conditions the rock eminence had a commanding view up and down the river, as well as across the river, thus becoming the best known river marker south of St. Louis.

The first trader to come along, (about 1704 or a few years later), a Frenchman by name of Girardot, pitched his shelter on the eminence so he could contact anyone traveling up and down the river. Some historians have written that he established the first enterprise, or business, in what was then known as the District of Missouri, which extended as far west as the Rockies and as far south as what is now Louisiana. However that may be, this ledge out into the river created an inlet or shelter below it, which made a good river harbor, a good place for protection from m ice and flood, and as it came within the meaning of a cape, the town got its name -- Cape Girardot. Later it was spelled Cape Girardeau, and so it remains today.

Mr. Louis Houck authentically described Cape Rock in his "History of Missouri," and it then became a definite marking point on the river.

In the meantime a newfangled idea was sweeping the country, called a civil club intended to promote more interest in the community. Soon thereafter Cape Girardeau had a Rotary Club that was going strong. At a Rotary luncheon one day, Lee L. Bowman, a member, explained that he had to sell what was known as the College (Farm) property, that he had set aside a tract for a public park to be known as Cape Rock Park and was authorized by the College to offer it for $10,000 if taken at once, otherwise it would be divided into building lots and sold for twice as much. A discussion followed, several members offered to be one of 103 persons to put up $100 each in order to save the historic spot from falling into private hands.

Then lawyer I.R. Kelso was called upon to work out a non-profit corporation with 103 members at $100 each and a provision that no one could ever own more than one share. Also it was provided that the property should forever be used as a public park. When the new corporation got possession of the 10 acres, it wasn't long until the late W.F. Bergmann, chairman, and Dennis M. Scivally, engineer of Cape Township Special Road District, offered to develop and maintain the property as a historical park, and what it is today is due mainly to the never ending interest of Mr. Scivally and Mr. Kelso.

In working out the plan to preserve Cape Rock property for the use of the people, Mr. Kelso became interested in the entire College Farm tract and it wasn't long until he had bought much of it, as the article in tomorrow's paper will show.