This blog continues an examination of the legacy of attorney I.R. Kelso, as seen through the eyes of the publishers of the Southeast Missourian newspaper.

After successfully negotiating a new franchise agreement, the Frisco Railroad began working to fulfill the various conditions of the pact. But that work would be interrupted by World War I.

This article concerning Kelso's legacy deals with his work to get a new passenger station built here and his employment by a new utility company as its legal representative and what that meant for the city of Cape Girardeau. 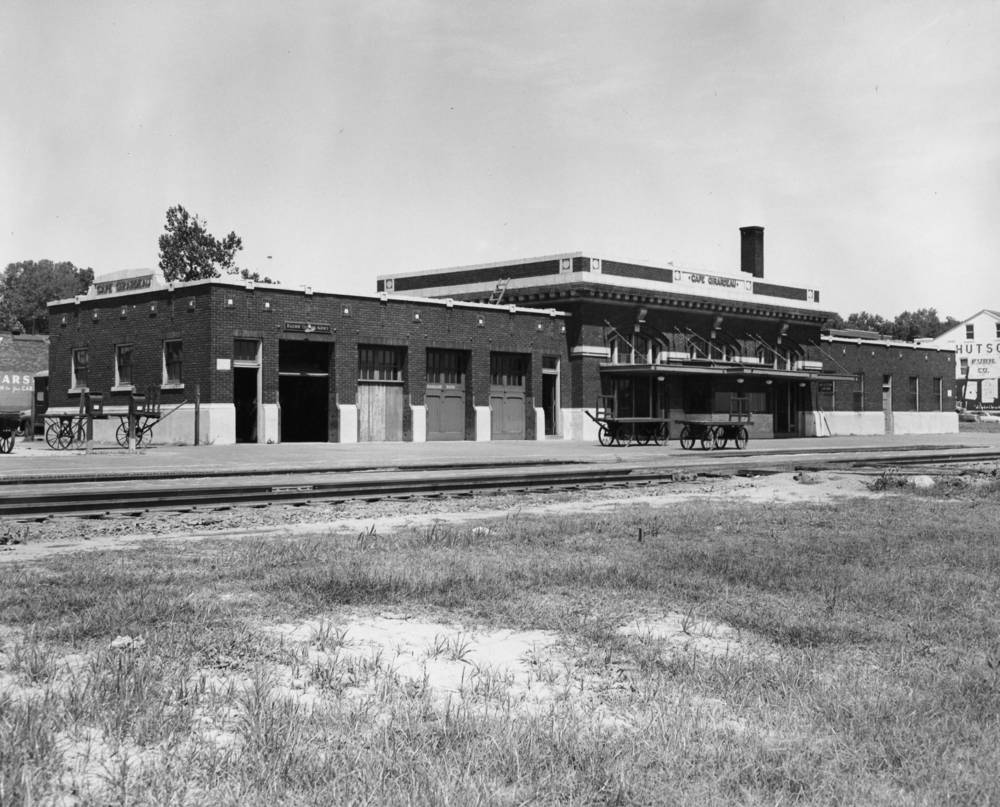 The Frisco passenger station was built on South Main Street in Cape Girardeau as part of a franchise agreement between the city and the railroad. (G.D. Fronabarger ~ Southeast Missourian archive)

Without delay the Frisco petitioned the Interstate Commerce Commission for authority to cut the coal rate from points in Illinois in half. Points throughout the district protested unless they were included in the reduction, and an organization was formed to carry on the fight.

Mr. Kelso was again called upon, this time by the Commercial Club, to aid the Frisco. The railroad contended that the reduction in the rate was intended as part payment in service for the franchise and therefore was not in reality a reduction in the coal rate. The same contention was made in the request for other rate changes.

Finally the Commerce Commission granted the authority in each case. It was estimated at the time that the Frisco brought to Cape Girardeau daily from 15 to 25 cars of coal estimated at 450 to 600 tons.

The reduction in the freight rate saved coal users from $200 to $300 a day, it was claimed by the Commercial Club.

Coal dealers announced reductions of 50 to 60 cents a ton, showing that the people were getting the benefits. Several years later it was shown that the receipts of coal had doubled and still the savings went to coal users. And this was only one of the savings enjoyed under the Leming-Kelso franchise contract, it was frequently pointed out.

Within a year after the contract was signed the concrete wall was finished, the depression had been filled with sand pumped from the river, trainloads of rich earth were brought in for a coating, the parklets were laid out, the Frisco tracks were straightened and improved from Broadway to the freight depot. The tract of land in North Cape that had been given the Frisco for yards was returned to the Commercial Club, freight rates and switching charges had been changed and once more there was complete harmony between the Frisco and the City.

Gradually other provisions of the contract were carried out. To extend Main Street south to William Street, it was necessary to organize a benefit district so the west line could be made the same as the west line of the two blocks from Themis to Independence Street. Also the property owners had to share in the cost of paving, putting in sewers, etc. When this was finished, the city joined with the Frisco in building the several parklets and putting down concrete streets and walks. Women's clubs furnished the shrubbery. The contract provided that the railroad should maintain the parklets and keep them in good condition.

Before steps could be taken to get the new passenger depot started, World War I came on, and all such work stopped.

In the meantime Mr. (Carl R.) Gray had been called to head the Hill rail empire in the Northwest. Soon after war was declared President Wilson ordered the government to take over all railroads and Mr. Gray was named the director. Then cam an order from Mr. Gray making Col. (F.G.) Jonah director of American railroad activities in France. In handling the immense passenger traffic occasioned by the war the old passenger station at the foot of Broadway played out completely.

The Commercial Club requested Mr. Kelso to contact Mr. Gray and after considerable correspondence and some personal visits, Mr. Gray advised that he had ordered the Frisco to proceed with the building of a new and adequate passenger depot at Cape Girardeau as an emergency measure, and in 1921 it was built at a cost reported (at) about $75,000. It was the only such depot built in the United States during the war, it was stated. (I have to question this last statement's accuracy. Missourian records show that the contract for the new passenger station wasn't let until Dec. 7, 1919, almost a month after World War I ended. - Sharon)

After World War I was ended and Mr. Gray returned to his job with the Hill system, he wrote to the Commercial Club more than once, asking how the contract worked out, always sending his best wishes for the town.

(Note -- A few years ago the Frisco made some repairs on the ornamental baluster at the north end of the concrete seawall. A thorough inspection of the wall was made by the engineers. A formal report said that not a defect could be found in the wall. It had served 30 years without a cent of maintenance cost and apparently was as solid as ever, the report said. Mr. Kelso exhibited a copy of the report with much satisfaction.)

(Note -- The franchise contract called for the railroad to maintain the depot parklets in good condition, which it did to the letter. When the franchise contract expired in 1940 and a new one was made without the public knowing it for several months, the Frisco agreed to pay $300 a month all told and was even excused from maintaining the parklets.)

Civic records show that from about 1900, when a considerable sum of money was raised to bring in a railroad operating from St. Louis to Memphis, to 1930, when the traffic was built at a total cost of a little over one million dollars, of which local citizens dug down to the very depths of their pockets and bought bonds to the extent of about $400,000, something important was going on all the time. The Commercial Club was one of the busiest places in the town. (Actually, the river bridge opened in 1928. I'm guessing the writer was "rounding up." - Sharon)

The coming of a railroad and a big shoe factory certainly roused the sleepy river landing into great activity which kept up briskly until a depression slowed the whole country down in 1930. Census figures tell the story: The 1900 census gave Cape 4,815; the 1930 census showed 16,227; and the old town still keeps going pretty well.

No sooner had the Frisco franchise matter and a few other lesser things be3en taken care of than I.R. Kelso was engaged by a new utility company that was taking over the original one. In 1904, when the publishers of this newspaper arrived on the scene, there wasn't an electric motor here; a home-owned electric plant that originated in a sawmill furnished electricity from dark to dawn only; the water plant, owned by the same group, supplied unadulterated river water that had been permitted to settle in a concrete basin a few days.

A St. Louis concern headed by Hugo Wurdach, bought these pants and immediately started their development. Mr. Kelso became the local representative of the owners. Continuous electric service soon drove out the gasoline engines and before long a gas plant was added.

Several severe winters in a row created a demand for better water service. Heavy floating ice in the river invariably interfered with the intake pi;e, which was merely an iron pipe run out into the water without any protection. So much complaint was raised that the State Health Department took a hand and, discovering that the intake had been moved from the river to the mouth of Sloan's Creek, which was then Cape's only sewage outlet, the water company was ordered to move the intake pipe above the creek.

In the meantime the Wurdach company had been absorbed by a much bigger utility concern, with Mr. Kelso as the general attorney. The outcome of the water trouble was that Kelso agreed to build the best water plant money could produce if the city would vote the company a franchise contract. Mayor Edward L. Drum and the council agreed.

The campaign was started and so was a strong opposition. Numerous leading citizens charged that the utility company wanted a franchise first so it could raise rates, and then, when it pleased it would build the plant. As usual, the fight was bitter. The result was that the proposition was defeated by a heavy margin.

Those who knew Mr. Kelso from the time he came here will recall that defeat at the polls meant little to him. Defeat always seemed to urge him on. It wasn't long until he announced that property near Cape Rock had been acquired for a new plant, with a modern intake built out in the deep current of the river. When completed technical magazines showed it as being the last word in municipal facilities, with the best water treatment plant to be found anywhere. It can be recalled that at that time increased rates were never mentioned and likely it may be found that rates have never been increased. To this day it can be said that no comparable city has a better water plant than Cape Girardeau, a facility that may be credited largely, or wholly, to Mr. Kelso, as further comment will show...

A portion of the Frisco seawall mentioned above was destroyed when the floodwall was constructed. In fact, the seawall and its ornamental balustrade were hidden by the floodwall for many years.

It wasn't until 2003, with the construction of a river walking trail, that the century-old seawall was "rediscovered." Unlike the description above, which noted a study of the retaining wall and balustrade done in the 1940s showed them in perfect condition, by 2003 it was found the balustrade was in sad shape, with missing sections and cracks. Rather than tear down the old to build the new, the city chose to restore the railing.

You can read about the work here: http://www.semissourian.com/story/117960.html