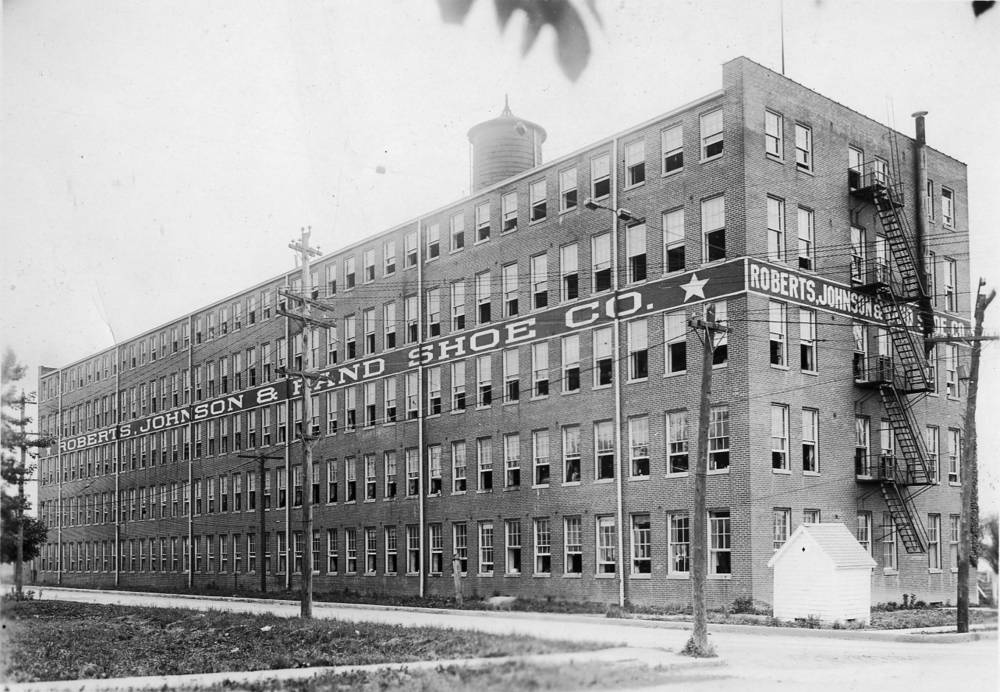 Through the efforts of I.R. Kelso, the Roberts, Johnson and Rand Shoe Co. opened a factory on North Main Street in Cape Girardeau in 1906. (Southeast Missourian archive)

In last week's blog, I discussed the death of attorney Isaac Reynolds "I.R." Kelso. This week, and for several weeks following, I'll bring you a series of articles about Kelso's legacy, as seen through the eyes of the publishers of the Southeast Missourian, George and Fred Naeter.

The publishers explained the coming articles in an introduction published on the editorial page of the Missourian on Dec. 10, 1951. It says, in part:

"I.R. Kelso, for more than 40 years a leading citizen of Cape Girardeau, died in a St. Louis hospital November 21, and was buried in the family plot at Mexico, Missouri, for the reason that he was born in Audrain County and started his career in Mexico. Mr. Kelso moved to Cape Girardeau from Kennett in 1906 to practice law, believing he could do better here because the Cape had been experiencing a boom due to the coming of the Frisco Railroad with through service to St. Louis and Memphis...

"The publishers of this newspaper were also newcomers to Cape Girardeau, having arrived late in 1904, and they were also greatly concerned over the future of the town. Several times a day they went to the Commercial Club rooms to ascertain how they might be of help to the community, and it is not difficult for them to recall that very often they found Lawyer Kelso also greatly concerned in the cause. From that time until recently the records show that Kelso was in practically every movement for the benefit of the community and the entire district. And during all this time the publishers observed and worked with many citizens who were true blue, but never one who kept at it so much and so effectively as did Mr. Kelso.

"Therefore this newspaper now feels that the least it can do is to give credit where credit is due by reviewing some of the constructive activities of our city from the beginning of this century to the present, believing it will be of value to those who are now carrying the community load, as well as to those who are to follow, and showing mainly what a leader can do when he has the ambition and the courage to carry on regardless of the difficulties that are always at hand...

The following day, the first of these articles appeared in the Missourian.

SOME EVALUATIONS OF THE COMMUNITY SERVICE

Many citizens of Cape Girardeau will recall the shock that came to the community back in 1906 when the Frisco Railroad moved its division offices and shops to another place. Everybody agreed that the sleepy old river town that had taken on new life a few years before when the Frisco established headquarters here and began train service between St. Louis and Memphis was doomed. There were a few small industries, a couple of fairly large sawmills, and a State Normal School, but all combined didn't equal the monthly payroll of the railroad. Business men wondered what to do.

So great was the upsurge due to the railroad payroll and the prospects of getting added industries, that the population grew from 4,815 in 1900 to an unofficial count of about 6,000 in 1906, and more people were moving in every month. It was in 1906 that I.R. Kelso moved to Cape Girardeau from Kennett with his wife and daughter. In later years he said he made the change thinking that Cape had struck it rich and being a boom town it would be a better place for a lawyer.

Soon after his arrival in Kennett, Mr. Kelso formed a partnership with the late Senator T.R.R. Ely, one of the most prominent lawyers of the district. About this time demands for drainage were getting first attention so the two lawyers eventually decided that it would be best to have an office in Cape Girardeau. The firm was enlarged with the addition of Julien Miller, son of William H. Miller, a distinguished lawyer and at that time president of the Southeast Missouri Trust Company in Cape Girardeau, the firm name becoming Kelso, Ely & Miller. Mr. Ely remained at the office in Kennett.

Records compiled from the files at The Missourian show that no sooner had Mr. Kelso reached Cape Girardeau than he was drawn into the campaign for a shoe factory to rescue the community from bankruptcy.

For about a year business men talked the thing over, wondering what might be done. Then one day David A. Glenn, the town's leading merchant and citizen, came home from a trip to St. Louis and at a hurried call for a mass meeting announced that Frank Rand, in his friendship for the river town that had long been one of his best customers for shoes, might be able to get the Roberts, Johnson & Rand Shoe Company to build a branch factory in Cape Girardeau.

At the mass meeting it was decided to make the effort and a large committee under the chairmanship of M.E. Leming, then president of the Cape Girardeau Commercial Club, was appointed.

The shoe company finally agreed to locate a factory here if the city would put up $60,000 to $70,000 to cover the cost. First, a drive started for every citizen to give something. When this slowed down with about $40,000 on hand, the larger donors were again assessed. About $10,000 more came in. Then some rough property in the north part of town was purchased, divided into town lots and sold at auction.

In spirited bidding a few choice lots brought as much as $500. Gradually the (lots) dwindled until perhaps 20 or 30 were offered in a group. An elderly native of the town who had long been considered wealthy, although he lived like a hermit, bought some of the groups at an average of $100 or more each. He had already bid in several at higher prices. For a man of the sort to show such great interest in securing a big factory for Cape Girardeau was acclaimed by all and when the auction was over there appeared to be enough money in sight to cover the balance needed.

The victory was pronounced the greatest thing that had ever happened for the town. Then as the days passed some of the bidders were unable to make their down payments and when the "philanthropist" who bid in a large number of lots explained that he had bid in order to encourage others to do likewise although he himself didn't have a dollar, the bottom of the campaign again dropped out and only gloom remained. Imagine the general disappointment!

Some of the soundest men declared that the full amount could not be raised, that the community had been milked dry, and that if would be necessary to put up what money was in hand and ask the shoe company to take it and do the best they could for the town.

It was at this point that I.R. Kelso became aroused. He argued that the full amount would have to be raised or the whole project might fail. It required quite a time to work out the details but success was finally achieved with the agreement of some of the most liberal givers to put up again.

Mr. (D.A.) Glenn added several thousand, making his total an even $8,000. (J.H.) Himmelberger and (W.H.) Harrison brought up their gifts to $8,000 each, and others dug deep down again proportionately with the big gifts. Finally $72,000 in cash was on the barrel head and work on he new building started in 1907. It was completed in due time and within a year about 1,000 men and women were at work. Then the town started on a new boom and continued to grow.

After the shoe factory was in operation and everybody was pleased, citizens began recalling their experiences. Many gave until it hurt, and as usual many did not. At a small gathering of civic leaders on a New Year Eve, a banker explained that Kelso, who came to town with a deposit of less than $1,000, had to go back to Kennett and as a friend to let him have enough money to pay his contribution to the shoe factory. As the writer of this review recalls, Mr. Kelso had pledged to give $3,000 all told.

Besides this, Mr. Kelso was called upon to write the contract for the shoe factory and see it through. It required much time and work to do this, and considerable personal expense.

From this beginning Mr. Kelso went from one important civic project to another through the long years, and had before him in his last days two projects that meant much to him.

The persistent activity of this unusual citizen who was never physically strong through more than 40 years is beyond comprehension. The permanent value of his efforts in behalf of his beloved community cannot be figured in money, but they were truly great, as the other articles of this series will show.

Surely such a citizen deserved all the credit his friends can bestow upon his memory.

The next article will appear in this column tomorrow.