In the summer of 1982, water stopped flowing in the Courthouse Park (now Ivers Square) Memorial Fountain. The Cape Girardeau County Court, which was paying for the water, closed the tap. It wasn't an arbitrary decision on the part of the county judges. The pump that controlled the flow of the water wasn't circulating it properly. That led to monthly water bills amounting to hundreds of dollars. And the county didn't have the thousands needed to fix the problem.

But Cape Girardeau is filled with heroes. The first to step into the breach were Mr. and Mrs. R.D. Harrison, who ponied up $3,500 toward restoration of the soldier and his fountain. And then there were Assistant Fire Chief Gene Hindman and his 26 firefighters who donated roughly 520 man-hours to sandblasting the monument, scraping paint, installing a new pump and giving the monument a general facelift.

As work progressed, one of those firemen brought the left hand of the "gray soldier" to my mentor, Judith Ann Crow. 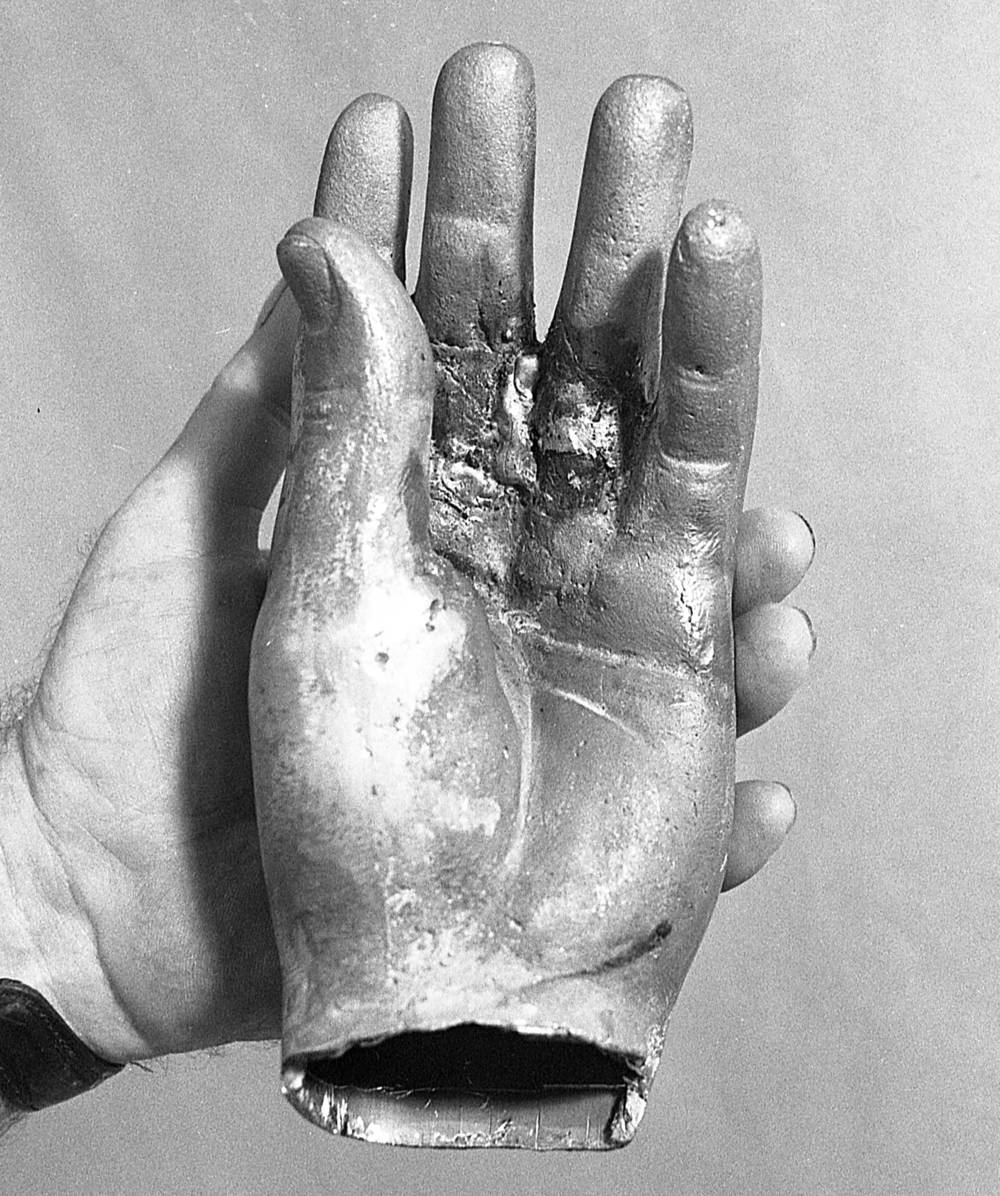 STANDING GUARD OVER A CITY, YOURS AND MINE.

By JUDITH A. CROW

His fingernails are broad and short, as a man's should be. The wrinkles in the skin around the knuckles are clearly visible. His palm shows a broken "life line." The hand that usually covers his musket comes to mine cold and heavy, but it warms as I hold it, examining the detailed fingers, the palm, the beautifully-patched back.

His is a Yankee soldier's hand, and mine is that of the great-granddaughter of a minor Rebel spy who was too proud to accept the government compensation offered for his brief imprisonment.

Yet there's a special bond of love between us -- love and understanding and a desire to heal wounds, old and new.

His hand is made of pewter, mostly lead, mine is flesh and bone and blood. If it had not been for our mutual friend, Capt. Jim Baker of the Cape Girardeau fire department, my gray soldier and I would never have "held hands" this way.

His figure stands some 20 feet above my head, quite beyond my reach, but the hand has had to be removed and repaired, and our friend brought it for me to examine the detailed workmanship before it was to be soldered back onto his stately figure.

He stands, at what I suppose might be a version of "parade rest," gazing westward over a growing Cape Girardeau and sometimes I imagine that he's looking directly at the little brick cottage at 323 Themis, standing guard over me.

It's a silly romantic notion, of course -- to think of this gray lead soldier standing guard over a house that was here at least a half a century before he was placed atop the fountain.

But it's not such a silly, sentimental notion that he stands guard over Cape Girardeau, his city and yours and mine.

The flurry of furor and interest that arose with the mention of the possibility that water would not cascade from his fountain (and the implication that he, himself, might ultimately disappear into the Mississippi River fog that so frequently shrouds him) is reassuring.

Despite all change, Cape Girardeau is still Cape Girardeau. The same spirit that led the Women's Relief Corps to raise the money for the state encampment of the Grand Army of the Republic in 1911, to provide generously for veterans and their families, and to erect the memorial statue and fountain to honor the dead of the War Between the States -- that same spirit still pervades our city.

It's also the spirit that led many "newcomers" to Cape Girardeau on a trek to view the memorial, along with some old-timers" who just didn't happen to see him that often, or to have had a childhood that included splashing in his pool, or an adulthood that included a romantic interlude sharing the fountain's "nacht-musik" and the marches of the Municipal Band from the old bandshell.

So many memories -- and it is of memories that dreams are built, and of dreams that towns and cities are built.

And it is such fountains as that presided over by the old soldier in Common Pleas Courthouse Park that cities such as Cape Girardeau measure and re-establish their identities.

The water began playing over the soldier once again on Sept. 17, 1982. The hand Judy held was restored to its proper place, but not before a document with the names of the firefighters who labored to see the monument rebuilt was sealed inside the hollow left arm.

On Nov. 7 the Memorial Fountain was re-dedicated.

It should be noted that the soldier topping the fountain is not the original figure erected by the ladies of the Women's Relief Corps in 1911. That gentleman was demolished by the falling limb of an oak tree in May 2003. Dexter, Missouri, sculptor Alan Gibson created a replacement, and it was installed in September 2003. The original statue, pieced back together by Gibson, has found a home at the county courthouse in Jackson.