Many of you probably read the article in the Southeast Missourian recently detailing the discovery of Col. Robert Gould Shaw's Civil War sword.

Shaw, you will remember from the movie "Glory," commanded the 54th Massachusetts Voluntary Infantry, an all-black unit. Shaw carried the recovered sword with him when he led his troops in an ill-fated attack on Fort Wagner, South Carolina, in 1863. Shaw died in that battle. Fifty-four men of the 54th were killed or fatally wounded.

Two years after the end of the war, the sword was returned to Shaw's parents by a Confederate officer. Eventually, it came to his sister and, it is believed, later to her grandson. Late last year, the weapon was found tucked away in the attic of the family home in Boston.

Alas, such a fairy tale ending wasn't in store for the Col. Lindsay Murdoch saber, which was bestowed on the colonel by the grateful residents of Cape Girardeau after the Civil War. While the details of the presentation aren't known, it can be stated that Murdoch played a decisive role in the defense of the city.

Murdoch died in 1907 in Marble Hill and is buried there.

On July 16, 1948, the Southeast Missourian carried a front-page story about Murdoch's service to this city and the sword's return to Cape Girardeau. 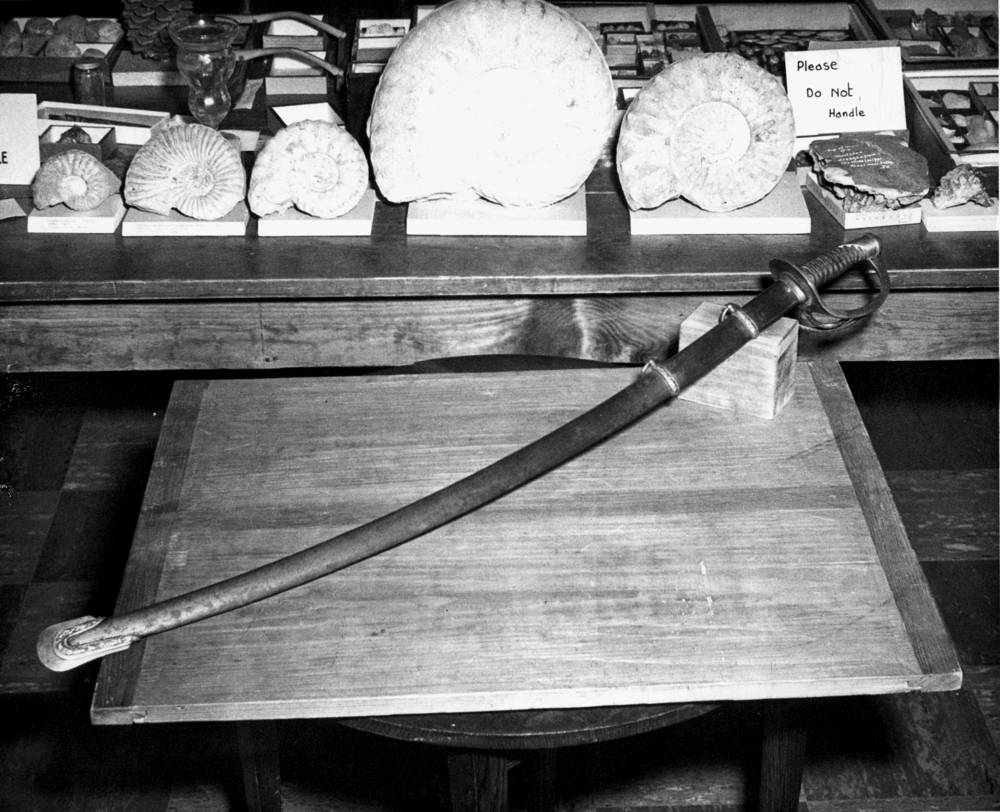 A Civil War saber, presented by grateful citizens of Cape Girardeau after the conflict to Col. Lindsay Murdock, commander of Union forts here during a part of the war, will make its return this fall to a permanent place in the museum at State College.

Arrangements were perfected this forenoon by Dr. H.S,. Murdoch, a grandson of the Civil War colonel, and President W.W. Parker of the college. The saber is inscribed on the handguard with a message of gratitude from Cape Girardeau residents for Col. Murdoch's defense of the city as commander of Forts A, B, C and D.

He related that with the family line gradually diminishing, he thought it wise to give the valuable memento to residents of the city who presented it. Since there is no municipal museum, it was suggested that State College officials be contacted. Arrangements were completed and the saber will be hung in Kent Library for permanent protection.

Dr. Murdoch and a daughter, Miss Natalie Murdoch, will leave late this month or early in August for Scotland, where they will visit at Dumbarton, his father's home, and Belfast, Ireland, where his mother was reared.

He related that Col. Murdoch was born in Scotland and emigrated to this country with his family. After a year or so in New York, they settled in Marble Hill, then Dallas, and when the Civil War started he was commissioned in the Union forces.

In addition to commanding the forts here, Col. Murdoch also served in engagements in Bollinger County, at Jackson and at Bloomfield. Following the war he was a collector of revenue in this section. Col. Murdoch is buried at Marble Hill.

"History of Southeast Missouri" relates the following account: "In August, 1861, Gen. Fremont gave Lindsay Murdoch of Bollinger County, a commission as lieutenant colonel, with orders to recruit a battalion for the defense of Cape Girardeau. With the assistance of Maj. (Daniel) Abbey he raised four companies which were known as the Fremont Rangers. They were recruited mainly in Bollinger, Scott and Cape Girardeau counties, and were commanded by Capts. J.T. Burk, William P. Harris and Michael S. Eddlemon. From Aug. 4 to Dec. 25, 1861, the Rangers served without pay or clothing, and did nearly all the scouting in Southeast Missouri."

The account then records that of the Missouri State Militia, only one regiment, the 12th Cavalry, was organized in Southeast Missouri composed of eight companies. Co. A was organized at Cape Girardeau Feb. 10, 1862, with Col. Murdock as commanding officer.

In 1961 a small museum was opened on the second floor of the Common Pleas Courthouse in Cape Girardeau by the Cape Girardeau County Historical Society. At some point, Southeast Missouri State University donated the sword to the museum.

In January 1972, however, burglars some how slipped into the building and scaled a partition wall that separated the museum from the courthouse space. The wall didn't extend to the ceiling, and the burglars were able to climb over it to get to the museum displays.

Among the items stolen was Col. Lindsay Murdock's saber.

Since this blog was published earlier this week, I have learned the Murdoch saber is safely on display at the Crisp Museum at the Southeast Missouri State University River Campus. This information came to me through local Civil War historian Denise Lincoln, who remembered seeing the sword there.

I also spoke with James Phillips, curator of collections and exhibitions at Crisp Museum. His documentation on the sword shows it was donated to the university in 1949, but there is no indication the weapon was ever out of the possession of that institution.

So, we are left with another mystery: Just whose sword was snatched in the 1972 burglary at the Cape County Historical Society's museum? I'll keep looking for answers and will update you with any new discoveries.