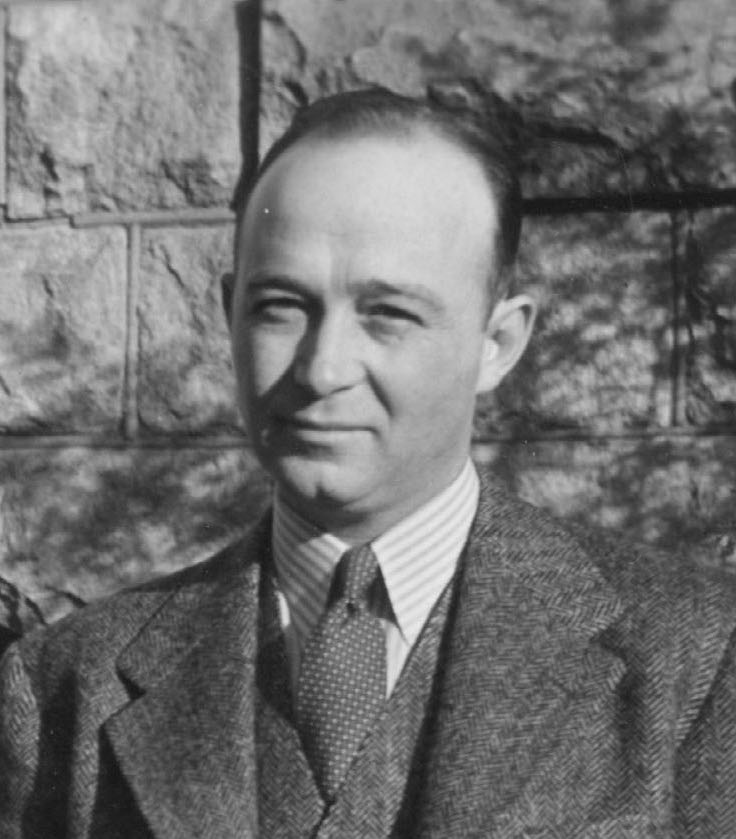 When H. Hinkle Statler was elected mayor of Cape Girardeau on April 14, 1940, at age 30, he was the youngest man to ever claim that political plumb. The feat is even more impressive, when one considers that the man he defeated for the job was four-term incumbent Mayor Edward L. Drum.

Elected to serve as a city commissioner with Statler that day was Raymond E. Beckman. Just two years later, Beckman would take Statler's place as acting mayor when the latter was called into active duty in the U.S. Navy.

Published in the Southeast Missourian July 8, 1942:

Statler Takes Leave of Absence From Official Duties to Serve in U.S. Navy.

Effective at 5 o'clock this afternoon, Commissioner R.E. Beckman will become acting mayor, succeeding Mayor Hinkle Statler, who will report at Dartmouth College in New Hampshire to start training in the Navy.

Mayor Statler, already under active naval duty status, plans to leave Sunday to begin training. He passed a second rigid physical examination before the naval board in St. Louis Monday. At Dartmouth he will be in the first naval district, but does not know yet what particular assignment he will receive.

In a special council meeting this morning Mayor Statler asked for a leave of absence for the remaining half of his four-year term, or until his return, if that is sooner, and this was granted by the three commissioners, Mr. Beckman, Frank Batchelor and Philip Steck.

It was decided that as provided by state law, Mr. Beckman should become acting mayor in absence of the elected mayor, and that he should receive the mayor's salary. The mayor waived payment of the salary while away.

A formal resolution will be drawn by City Attorney R.P. Smith, setting out that Mayor Statler is taking leave of the office, and providing that Mr. Beckman,, legal vice chairman of the council, becomes acting mayor pending return of the mayor.

As to selection of a third commissioner, it was decided by the council that this is not necessary. This will permit saving of $150 salary per month, it was pointed out. The new acting mayor will attend to duties of the mayor's office and will also continue in charge of the finance and city parks departments, it was agreed. As acting mayor he will have charge of the police department.

City Attorney Smith said that in the future, with three members in the active council, it will require a unanimous vote to secure passage of a measure. The law states that a "vote of three members" shall be necessary for passage of ordinances, resolutions, etc., Mr. Smith said.

Mr. Statler, 32 years old, said of the duty with the Navy: "I think it a good break." He pointed out that all applicants at St. Louis for officers' rank were disqualified if any physical defect could be found. He had but two pounds weight to spare, being two pounds over the minimum weight for a candidate of his height.

He is to report to Dartmouth, one of the older colleges in the country, where he will receive at least his preliminary training, at 9 a.m. Wednesday.

The city has been having difficulty keeping within the budget and within the bounds of the actual income during the present year, and whether special steps to cut the outlay will be taken in the future has not been determined.

The personnel has been kept about at par, much like it has been for several years. A group of city employees asked a pay increase two months ago, but the council has taken no action.

Acting Mayor Beckman is 45 years old and is a veteran of World War. I, having served in the Navy. He and Mrs. Beckman and their three daughters, Dorothy LaDonne, Charlotte and Patricia Jean, reside at 503 S. Ellis St. Miss Charlotte is taking nurses' training at St. John's Hospital in St. Louis, but is here on vacation at this time. Mr. Beckman for many years operated a grocery store on Good Hope Street.

In the same edition of the Missourian, just under that story, was a second article in reference to a mid-term mayoral absence 20 years earlier.

HOW CITY COUNCIL ONCE FILLED VACANCY IN THE OFFICE OF MAYOR

Two Commissioners, Disputing Over Question of Salary, Agreed on Appointment of Barks.

Once before, since the commission form of government was adopted, Cape Girardeau faced the problem of filling the vacancy in the office of mayor. However, unlike the present situation created by Mayor Hinkle Statler taking a leave of absence to enter the Navy, the vacancy came about by an outright resignation.

The late H.H. Haas was mayor back in September 1921, when he was appointed postmaster under the Harding administration. The other members of the City Council were Louis Wittmor and the late Dr. C.E. Schuchert, there being only three members of the body at that time.

When Mr. Haas submitted his resignation, Dr. Schuchert, as commissioner of finance, became acting mayor. While the matter was discussed some, there was no action taken until Nov. 7, when Dr. Schuchert remarked at a council meeting that inasmuch as he was carrying on he job of mayor, he should get the mayor's salary. Mr. Wittmor demurred, and after a verbal exchange, the late James A. Barks, then city counselor, was ordered to look up the law to see if the acting mayor should receive the mayor's salary.

However, before the matter could be looked into, Dr. Schuchert, who plainly showed the situation wasn't to his liking, asked Commissioner Wittmor to nominate someone for mayor. Wittmor promptly suggested the name of Charles L. Harrison, but Dr. Schuchert said he was sure Mr. Harrison wouldn't take the job. Then Mr. Wittmore nominated the late E.W. Flentge, but a second failed. Finally, after Mr. Wittmor admitted he was through, Dr. Schuchert said, "I nominate Jim Barks."

Surprised, Mr. Wittmor was silent for a moment, then said, "I'll second the motion." And, so Mr. Barks became mayor, filled out the remainder of the Haas term and went on to serve three other terms.

The point in recalling this ancient bit of history is that once the members of a city council elected a mayor to serve out an unexpired term.

Beckman apparently liked the mayoral duties, as he ran for the job in 1944 and was elected. He served until 1948.

Statler, who suffered a spinal fracture during his service aboard a Navy vessel during a storm off Scotland in 1943, returned to Cape Girardeau after the war, but did not return to elected office. 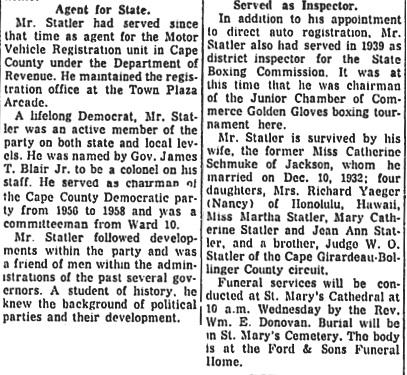