The United States declared war on Germany on April 6, 1917, ushering this country into the Great War.

Three days later, an advertisement on an inside page of The Daily Republican caught my eye: 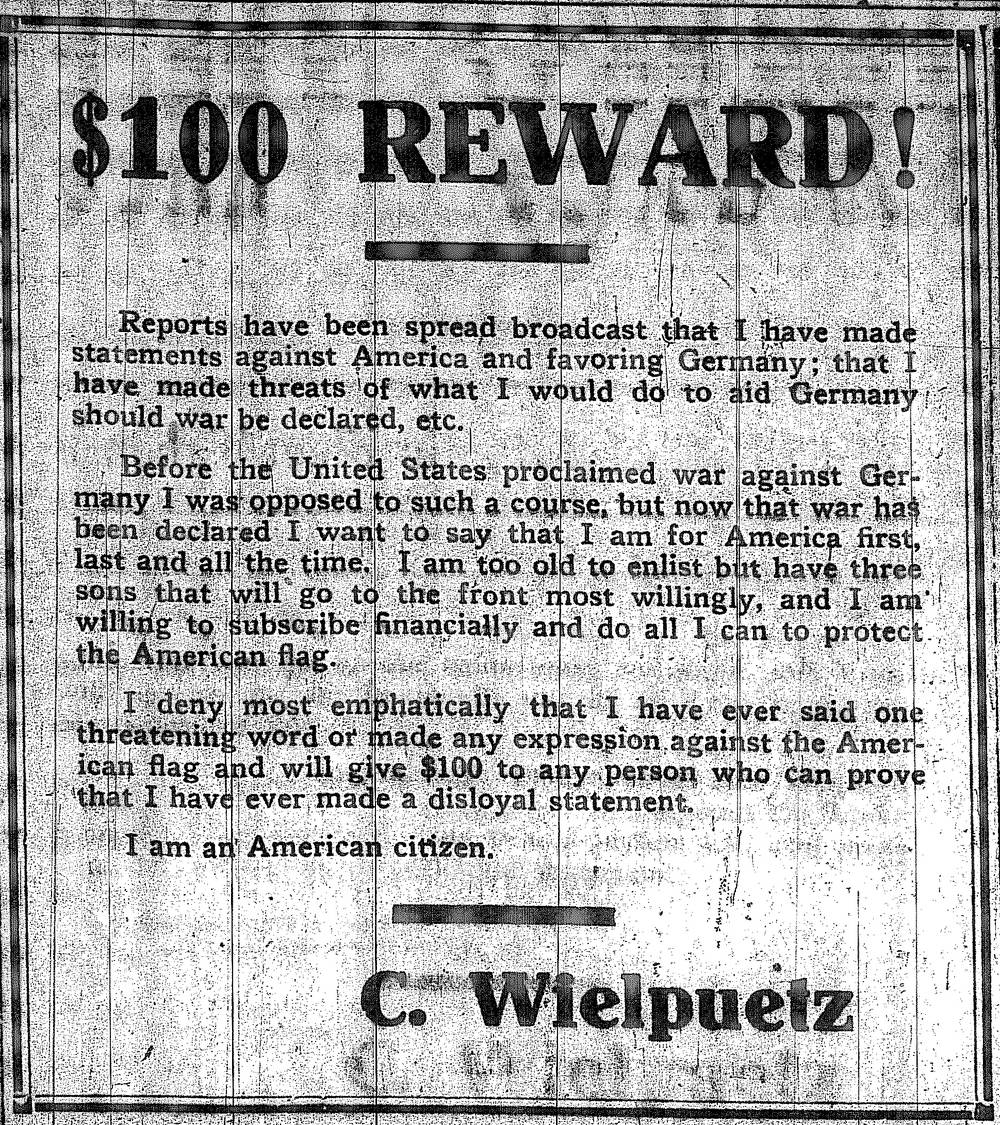 Immediately below this advertisement was an article that provides more information about Carl Wielpuetz and the attacks made against him.

Resents Charges That He Is Not Loyal American -- Statement of Facts.

The Wielpuetz bakery has an advertisement in this issue that calls attention to an intolerable condition that is now sweeping the country. From most every town comes reports of certain citizens having been arrested or humiliated for making statements against the United States and in every instance, so far as is known, such reports have proved untrue.

Many times lately it has been reported on the street that certain citizens, who are known to be German by birth, have been arrested or are under surveillance, because of anti-American talk, and each time the reports were absolutely without any foundation.

Mr. Wielpuetz has been bothered considerably lately by people who declared they would quit buying his bakery products because had made remarks against the government. It is well known that Mr. Wielpuetz came from

Germany and that he has prided himself on this fact. It is also well known that he was opposed to war with Germany. He frequently made such statements vigorously. He believed that President Wilson was partial to the Allies and the German people had his strongest sympathy. But those who know him best say he never once had a word to say against the American government. In his arguments on the war he always said that the best thing he ever did was when he took out his naturalization papers and became an American citizen.

The fact is that as soon as war was declared against Germany the American flag went up in the Wielpuetz bakery and this was done without any outside suggestion. It is bad enough to disagree with a man over governmental problems and condemn him for his opinions, but it is little less than a crime to attack a man's business just because he happens to express his opinion on a political or economic question which has two strong sides.

Mr. Wielpuetz has long been a good citizen of Cape Girardeau. He and his sons have built up a strong bakery business here and they have contributed and aided in most every forward movement for the good of the town. Mr. Wielpuetz now offers to pay a reward to any person who can prove that he ever uttered a word against the United States, thinking that in this way he can best set himself clear with the people who might be misled by the statements of chronic gossips or unscrupulous persons.

In his offer of reward Mr. Wielpuetz says he has three sons that will answer the call of Uncle Sam most willingly. These boys are actively in charge of the bakery and are making a big success of it. No one has ever even insinuated that they are not true Americans and no three boys will be found answering the call any sooner than these.

The Wielpuetz bakery is one of Cape Girardeau's best manufacturing institutions and no person has a just right to say one word against the loyalty and Americanism of the elder Wielpuetz or his sons.

Carl Wielpuetz came to the United States with his wife, Helene, in May 1889. They and their three sons mentioned in the above article -- Arthur C., Ernest and Max John Wielpuetz -- first lived in Belleville, Illinois. It was while the family was living in St. Clair County, that Carl Wielpuetz became a naturalized citizen of the United States on Oct. 20, 1900.

Later, when construction was started on the Thebes, Illinois, railroad bridge, the family moved to Fornfelt (now Scott City), setting up a bakery in a tent and selling their wares to the townspeople as well as to the bridge builders. In 1911 the business was transferred to Haarig in Cape Girardeau, the business district that catered to the large German population. A second bakery was opened in Poplar Bluff in 1922.

Carl retired in 1917 and in 1922 moved to Los Angeles, California, with his wife to live with their daughter, Mrs. C.C. Allmeroth. I could find little else about the older couple, except that they disappeared from federal census reports between 1930 and 1940.

Ancestry.com records show that all three of the Wielpuetz boys filled out military draft cards, but other than that I could find no record of their service. Both Arthur and Max also filled out draft cards during World War II.

The bakery in Cape Girardeau continued to be run by Max Wielpuetz. In 1928 he bought out the interests of his brothers and father. He ran the Cape Girardeau business until 1935, when he sold it to Tom Fitzgerald & Son.