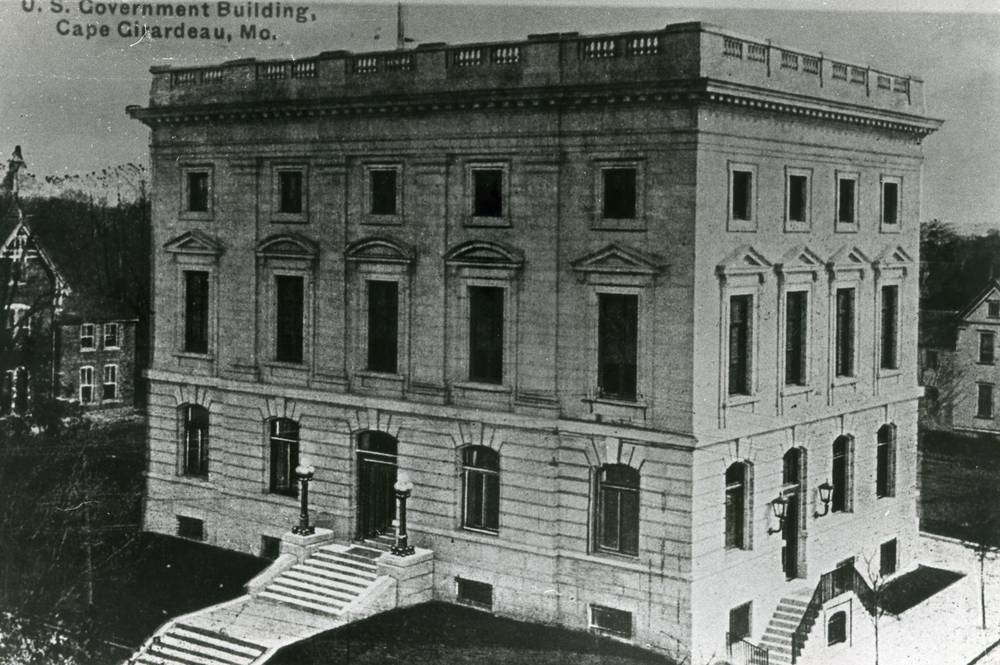 Fifty years ago this month, workers began the process of stripping the halls and rooms of the old post office/federal building in Cape Girardeau. They salvaged what was deemed usable in anticipation of the old building's demolition later that month.

A story in the March 22, 1967, Southeast Missourian described the process. But it was the accompanying photographs that caught my eye.

I have no memory of the old building that stood at the southeast corner of Broadway and Fountain Street, but I have often thought that we made a poor trade when it was torn down and the second federal building took its place.

Below is the 1967 article about the demolition, as well as interior images of the building.

Demolition work has begun on the 57-year-old former post office-federal building here. It is being razed to make room for a new federal courthouse and office building on the same site.

Interior dismantling was in progress today by the Hintz Wrecking and Excavating Co. of St. Louis, a sub-contractor of the Gerhardt Construction Co. of Cape Girardeau for the wrecking process.

The Gerhardt concern holds the contract for the demolition of the old building and the erection of the new one. 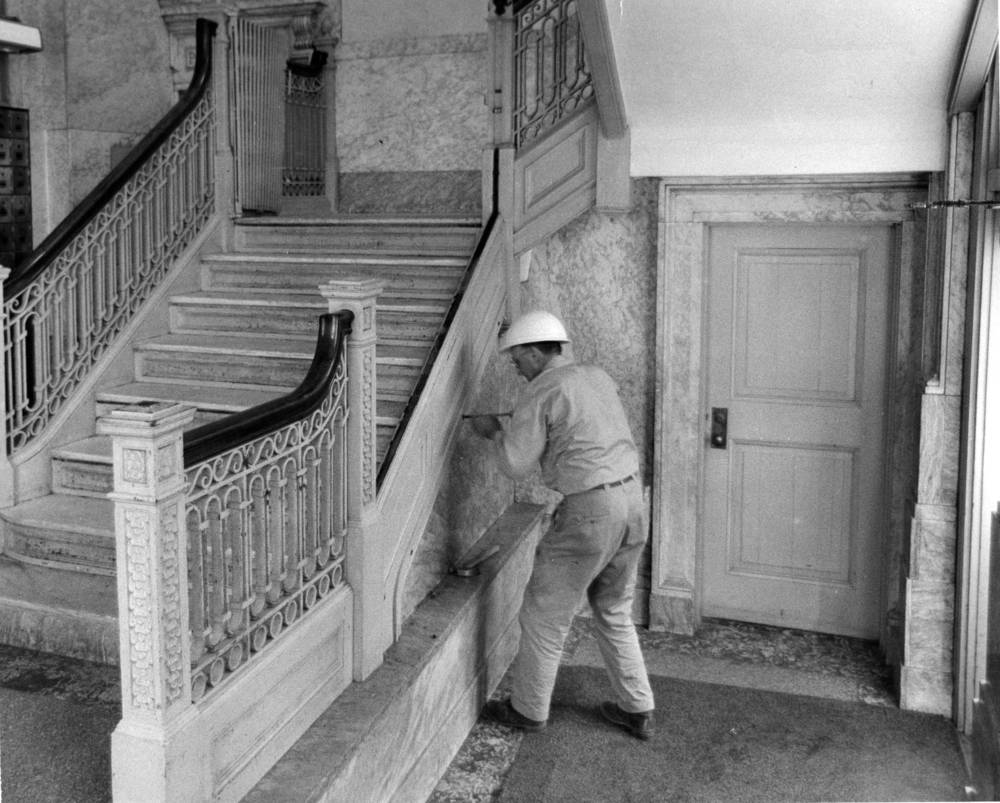 Charles Hintz of the demolition company estimated today it will take about 30 days for the razing process. The dismantling of salvageable materials will take about seven days, he said.

When the interior of the building has been stripped of usable materials, the three-story structure will be knocked down by a steel "headache ball."

Mr. Hintz said the marble in the lobby and elsewhere will be salvaged and sold as will the postal boxes which line the lobby. 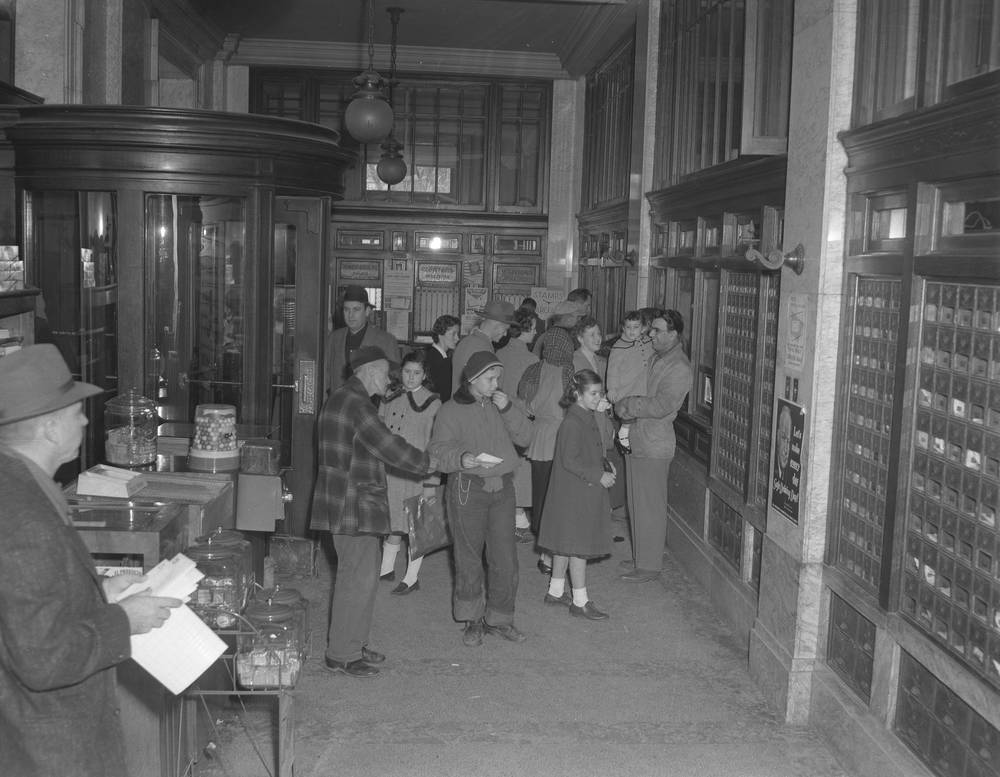 This undated photo shows the lobby, lined with postal boxes, as well as the revolving door at left, said to be the first installed in a building in Cape Girardeau. (G.D. Fronabarger ~ Southeast Missourian archive)

Woodwork and other interior trim will be salvaged also, he said.

The building at Broadway and Fountain was built in 1910 and served as Cape Girardeau's post office until the new facility at Bellevue and Frederick was opened in 1965. 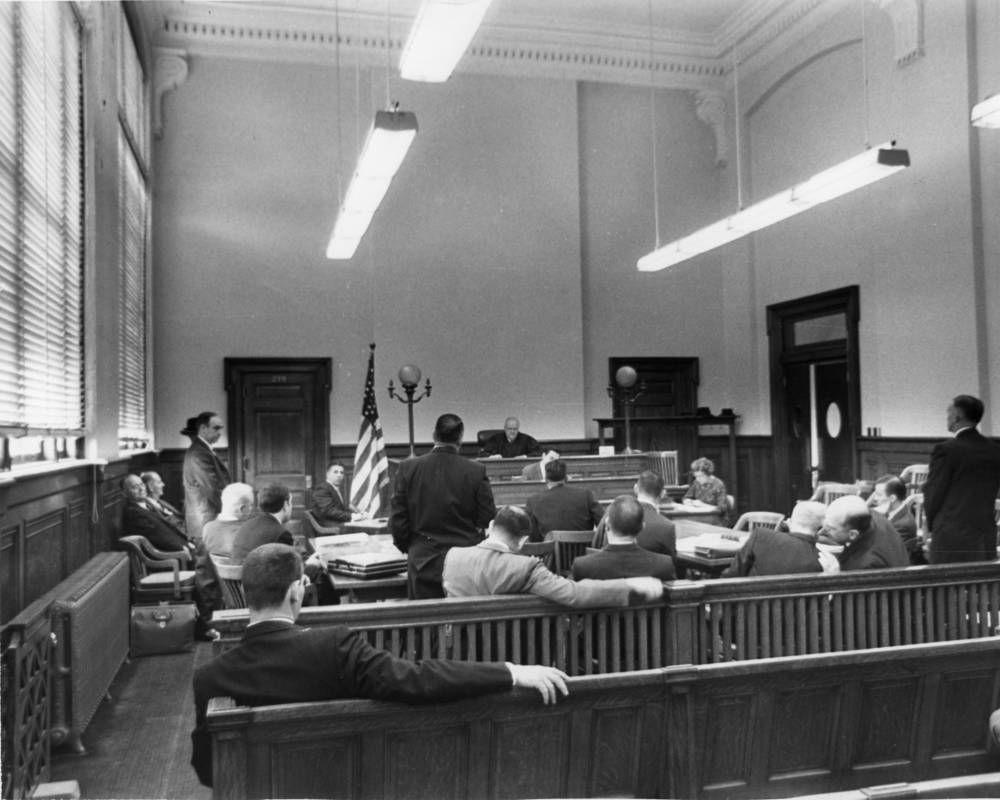 One of the final cases heard in the original U.S. District Court here was photographed on Nov. 21, 1966. Presiding was Judge James H. Meredith. (Southeast Missourian archive)

United States District Court continued to be held in the building and a number of other federal offices had space there.

The final regular term of court in the building was held last fall. The clerk's office was moved recently to rented quarters in the Surety Building across the street. 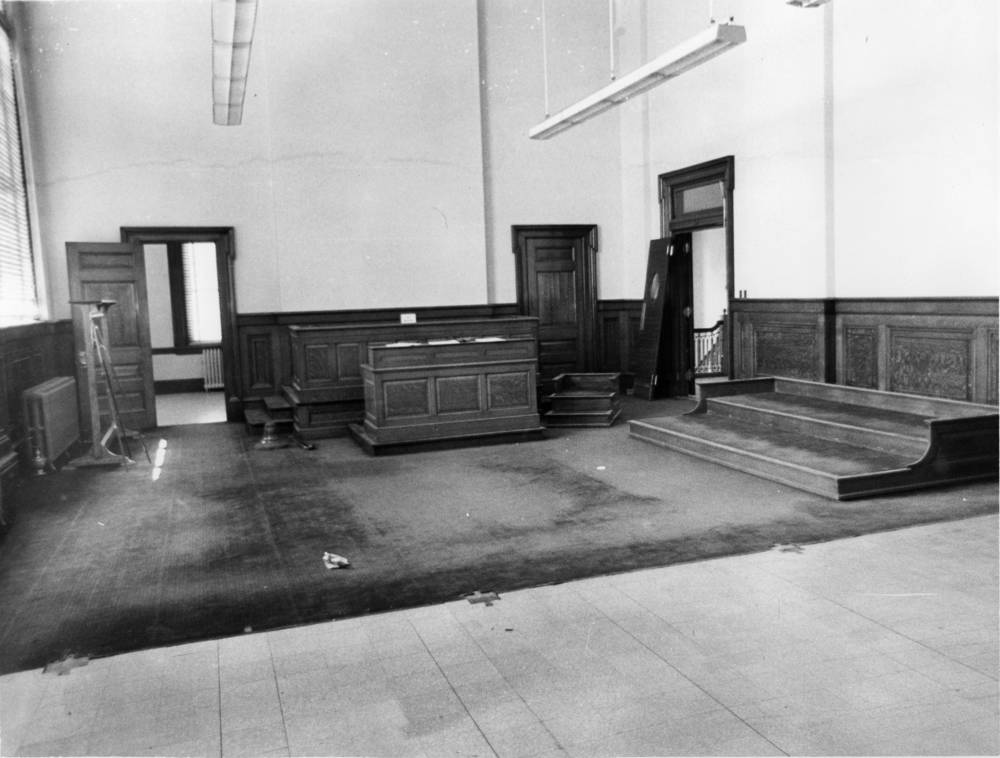 This photo shows the federal courtroom, barely recognizable with the railing down and chairs and tables removed. (Southeast Missourian archive)

During construction of the new building, U.S. District Court will be held in the Common Pleas Courthouse.

Courtroom furniture from the federal building has been removed and is awaiting disposition. (A later story said that much of the furniture, including the courtroom pews, were adopted by the Common Pleas Courthouse. -- Sharon) 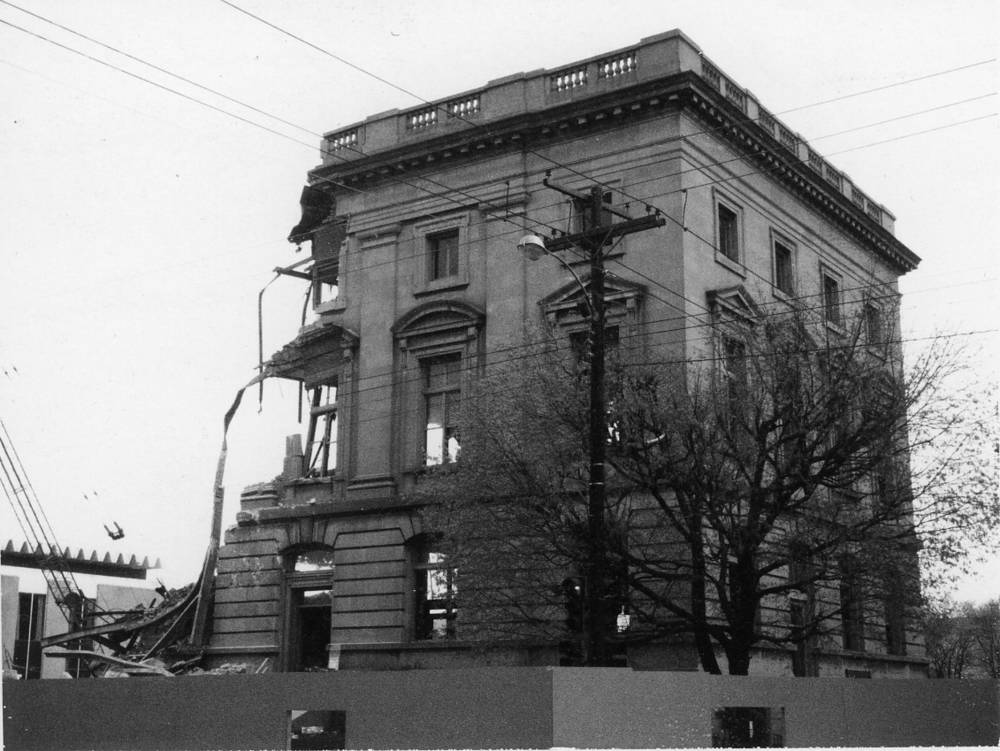 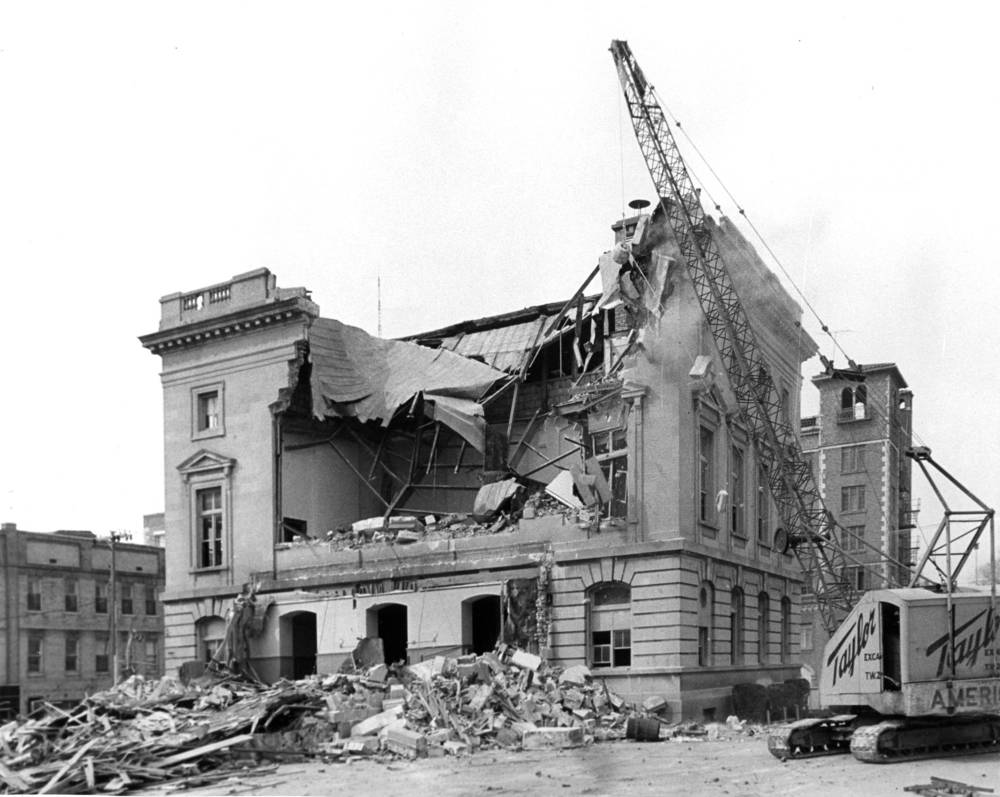 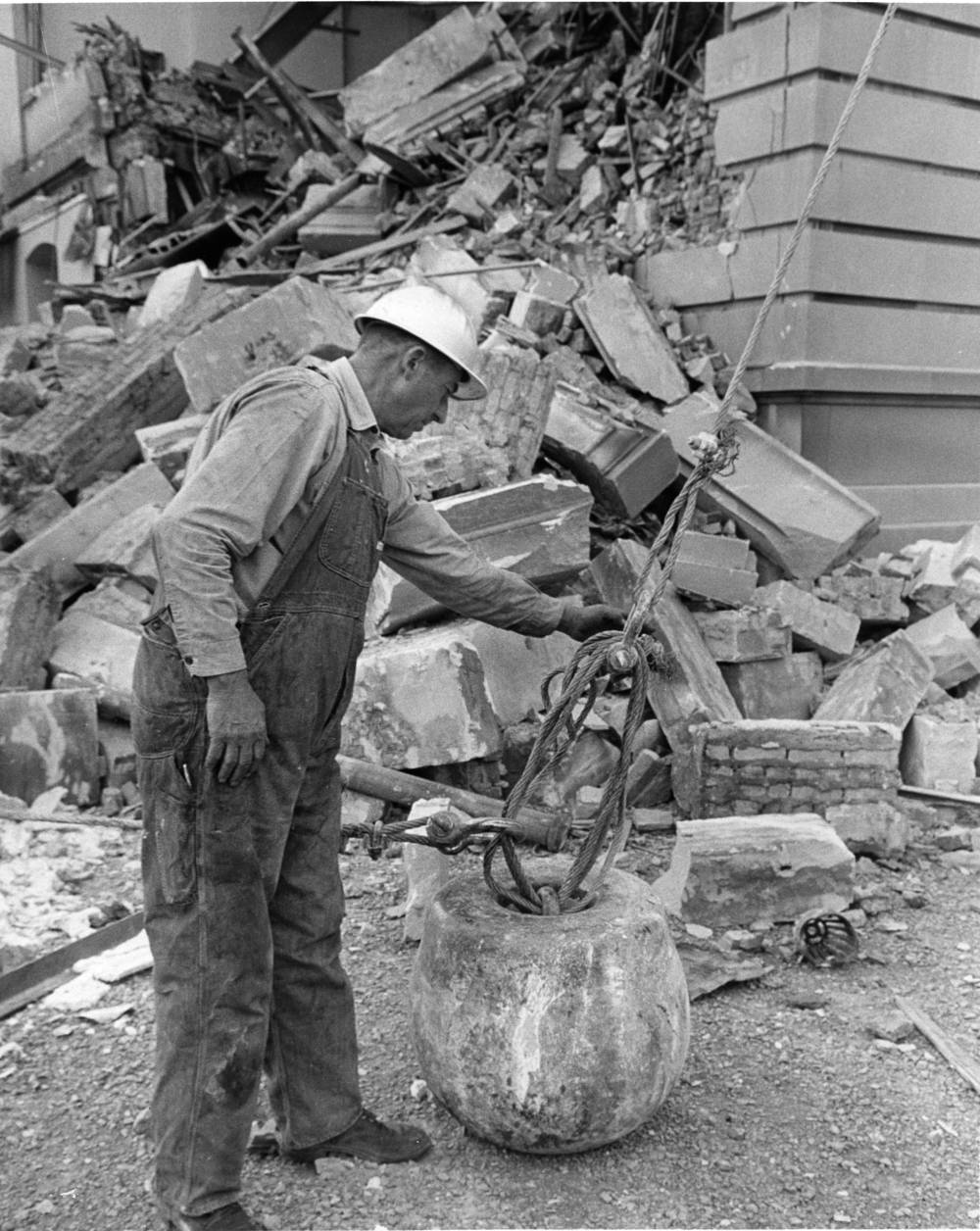 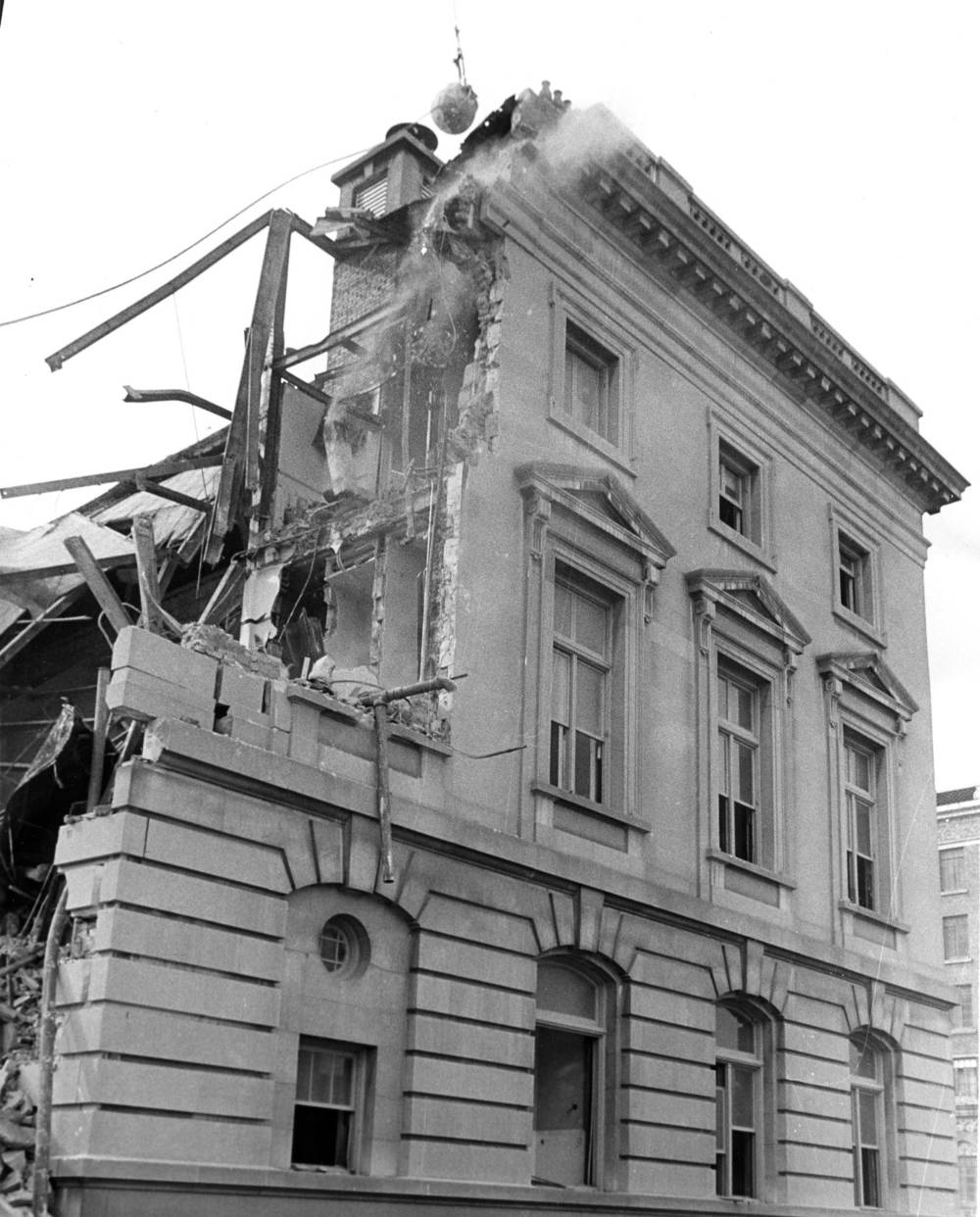 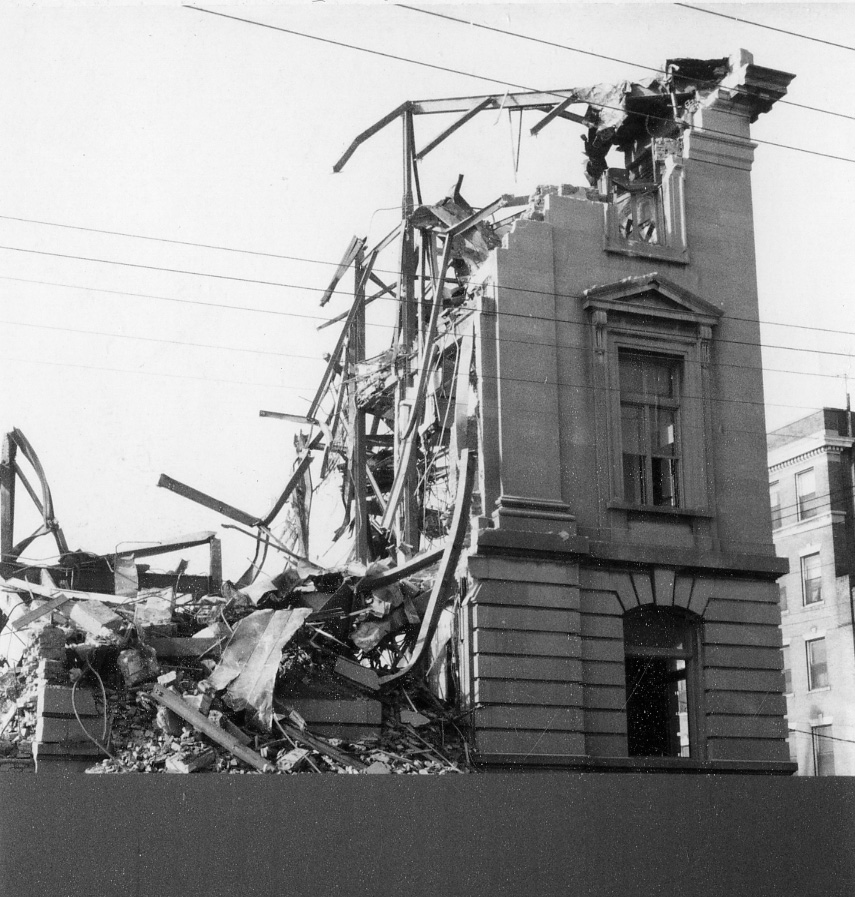 The April 1, 1967, Missourian carried two items regarding the demolition of the historic building, which puts its demise into perspective.

ALL HALE... BUT FAREWELL

The sturdy block and granite structure which is taking only three days to reduce to a heap of rubble required nearly 18 months of painstaking work to erect nearly 60 years ago.

The structure, of course, is -- or rather was -- the former post office-federal building at the southeast corner of Broadway and Fountain.

It is being razed to make room for a new federal courthouse and office building on the same site.

Despite the building's thick masonry walls and brawny steel supports, the ton and a half wrecking ball is making relatively short work of what was the pride of early-century craftsmen

By forenoon today, only the northwest quarter of the three-story government building was standing, and the wrecking contractor had predicted complete demolition by the end of th day.

In 1908-10, things didn't move so rapidly, least of all the construction of a substantial building.

The contract for the new post office-federal building was awarded on Oct. 21, 1908, and... masonry work was beginning to rise by the following February.

It was on March 13, 1910, that the Cape Girardeau Post Office moved to its new home from its previous quarters at 128 Main.

The building, which has been widely lauded -- particularly in its last days -- for its solidness, was erected under the supervision of Henry Brunke.

During the early days of construction, when rock was struck during excavation, some of the earlier history of the site was brought to light.

It was told tat an old well, in which a man had died of gas about 30 years before, had been filled with earth and stone.

The death of the man, Louis Bezard, had given rise to superstition about the property, and some at the time felt that the new building would be plagued by misfortune.

Just as the old is now being forced to give way to the new, a house had to be razed in 1908 to clear the way for the post office.

The lot had been the site of one of Cape Girardeau's finer early homes, the Thomas Johnson dwelling.

Reports from 1907, when the government was acquiring the property for the new building, refer to purchase of a house and lot from Edward Ruesskamp and a Rodney lot.

The 300 block of Broadway was largely residential during the early years of the 20th Century. The old Opera House was the only commercial building in the block before the post office was erected.

Seven months after the building was completed, proud Girardeans gave it the formal dedication.

The occasion was the opening of the fall term of Federal Court with Judge P.D. Dyer presiding. He was one of the several speakers at the function,

The post master at that time was E.W. Flentge.

The building served as Cape Girardeau's post office until mid-1965, when the new facility at Bellevue and Frederick was opened.

Federal Court continued to be held there, and a few other offices remained until the impending demolition forced complete evacuation.

Time Marches Too -- But ON, Fellows, ON!

Well, as Ben Franklin would say, "Better late than never."

Passers-by reported that three to five college-age boys carrying cardboard placards were seen (yesterday) marching in front of the rubble that used to be the old post office-federal building.

One of the crudely-lettered signs read, "Help save the old post office"; another pleaded, "Preserve this valuable landmark."

The youths were unavailable for comment this morning, but it is rumored that they are planning to march in demonstration against the War of 1812 next weekend.