I used an item in the "Out of the Past" column recently about a swimming pool the Civic Improvement Association proposed to build in 1917 at the corner of William and South Lorimier streets. That sparked an email exchange between myself and a Texas friend, who was curious about that location and the ultimate outcome of the century-ago proposal.

The conversation made me curious about the history of that location, now known as Indian Park.

It's clear from the 1917 articles that the site was yet to acquire its current name, but it was already owned by the city. To learn more, I turned to the 1956 history, "Cape Girardeau: Biography of a City," by Felix Snider and Earl Collins: "Indian Park, northwest of Fountain and William streets, was also given to the city by (Cape Girardeau founder Louis) Lorimier. At the west end was a beautiful spring from which Fountain Street takes its name. The stream ran across the park, thence a block or so northeast past the Red House, and on to join the river near Independence Street. Tradition says that anyone partaking of this spring water would surely return to this Happy Hollow again. The park has been cleared and a cover of grass started. It has a little playground equipment. A marker of native granite telling of Indians camping and trading on the spot 150 years ago was dedicated in 1946."

An Oct. 8, 1946, article in the Southeast Missourian about that dedication gives a little more history, and also yields a couple of interesting photos taken at the event. 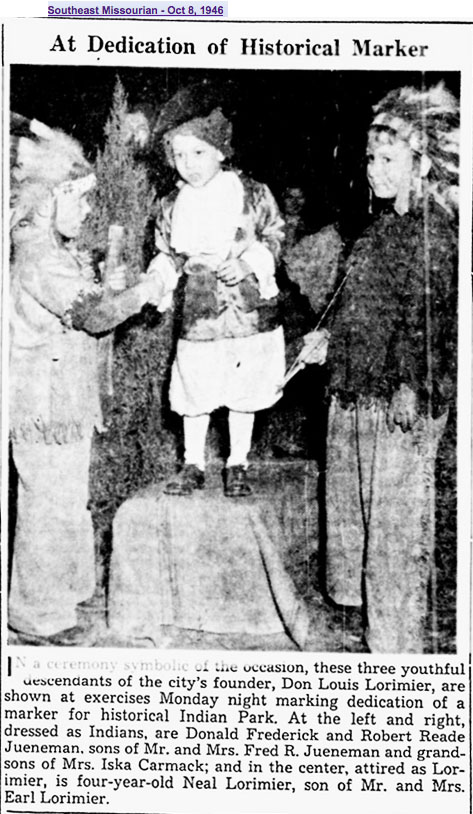 On ground rich in historical lore a marker commemorating the site where Don Louis Lorimier in the period between 1792-3 and 18712 made lasting friendships with the Indian tribes inhabiting this section was dedicated Monday night, the occasion also being one in observance of Missouri Park.

The large native granite boulder, procured from the Graniteville (Missouri) area, and bearing a fitting inscription, is located in Indian Park, William and Lorimier streets, where the exercises were held.

Appropriately, tribute was paid to descendants of Lorimier of whom there were 10 present, these including Ralph S. Lorimier and Arthur C. Lorimier of St.. Louis and the following from Cape Girardeau: Earl Lorimier and his son, Neal, Mrs. Maude Uhl and daughter, Miss Helen, Mrs. Iska Carmack and her daughter, Mrs. Fred R. Jueneman and the latter's sons, Robert Reade and Donald Frederick.

Closing the ceremony, Neal Lorimier, 4, attired as Lorimier, and the Jueneman brothers dressed as Indians, clasped hands in front of the marker in a ceremony symbolic of the friendship the city's founder had for the Indians.

Dr. W.W. Parker, in the principal address, besides calling attention to the importance of the occasion and the movement started to mark historical points of interest, also referred to the observance of Missouri Day and the importance of this state in the nation, saying that perhaps only two outrank Missouri in historical significance.

Dr. Parker was presented by B.C. Hardesty, of the executive committee of the community historical group, who also commended those who had assisted in making the occasion possible.

Mayor R.E. Beckman in accepting the marker in behalf of the city, pledged continued cooperation in marking historical points.

Prior to the program, Boy Scouts presented an Indian campfire scene, and in concluding the ceremony Girl Scouts sang Taps, an impressive rendition which appropriately closed the exercises.

Mr. Hardesty called special attention today to the fact that i was through a tag day sponsored by the American Legion Auxiliary that made purchase of the marker possible, and also commended the Girl Scouts and Boy Scouts and their leaders for cooperating in the program. 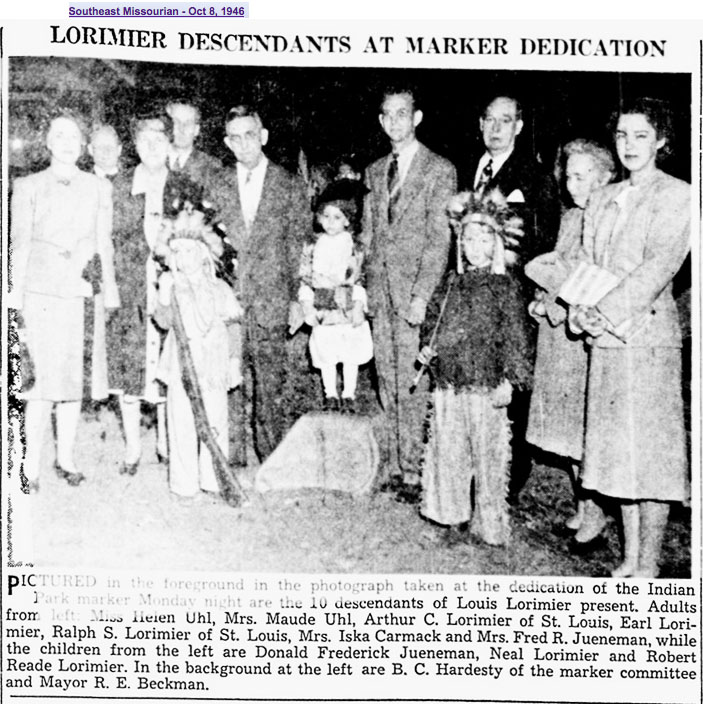