Cape Girardeau once had a paint factory

Late in October 1941, Charles E. Peterson, a senior landscape architect working on the Jefferson National Expansion Memorial and the National Park Service in St. Louis, traveled to Cape Girardeau looking for clay. Aided by several locals, Peterson found what he was looking for and returned to St. Louis with about 100 pounds of material "mined" from an embankment on Cape Rock Drive near Twin Trees Park.

Peterson was hoping to locate the source of the clay used to make paint that had once adorned the woodwork on the "Old Rock House," which at the time was owned by the National Park Service and was being restored as part of the memorial. That historic structure was built in 1881 as a warehouse by Manuel Lisa. As it turned out, the memorial ended the Old Rock House's existence. Instead of being preserved, the old stone structure was dismantled in 1959, perhaps with the hopes that it would one day be reconstructed on the grounds of the memorial.

In the Southeast Missourian article describing Peterson's search for the clay source, the writer quoted the 1812 "Historical and Descriptive Sketches of Louisiana" by Maj. Amos Stoddard: "Near Cape Girardeau there is a substance which, when ground in oil, affords and excellent brown paint, equal in beauty and durability to the imported Spanish brown. Many of the inhabitants on the Mississippi paint their buildings with it. This substance seems to be inexhaustible, and may eventually prove of great utility to the people of the western country."

That story prompted another one that told part of the history of clay mining and paint manufacturing in the Cape Girardeau area. 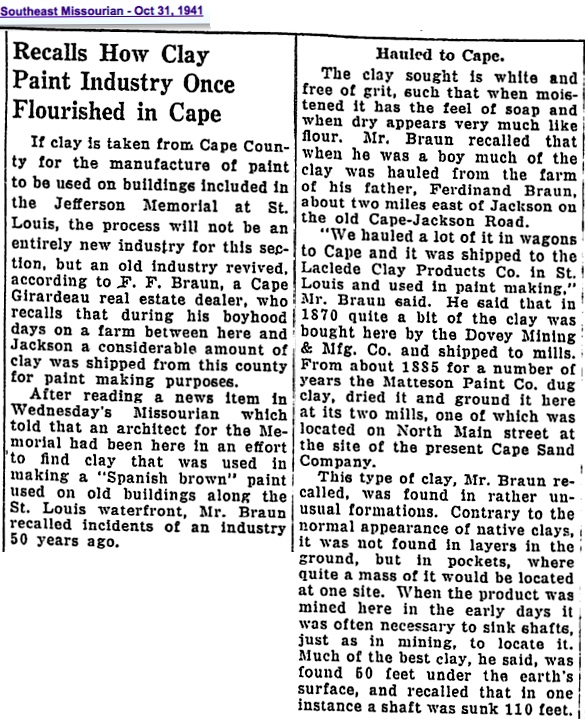 The Matteson Paint Co. mentioned by Braun was established in Cape Girardeau in 1880-81 by James A. Matteson. It was located in the 400 block of North Main Street. This picture of the factory was used in the Missourian's pictorial history, "Images of the Past in the City of Roses." It came to us courtesy of the Cape Girardeau River Heritage Museum. 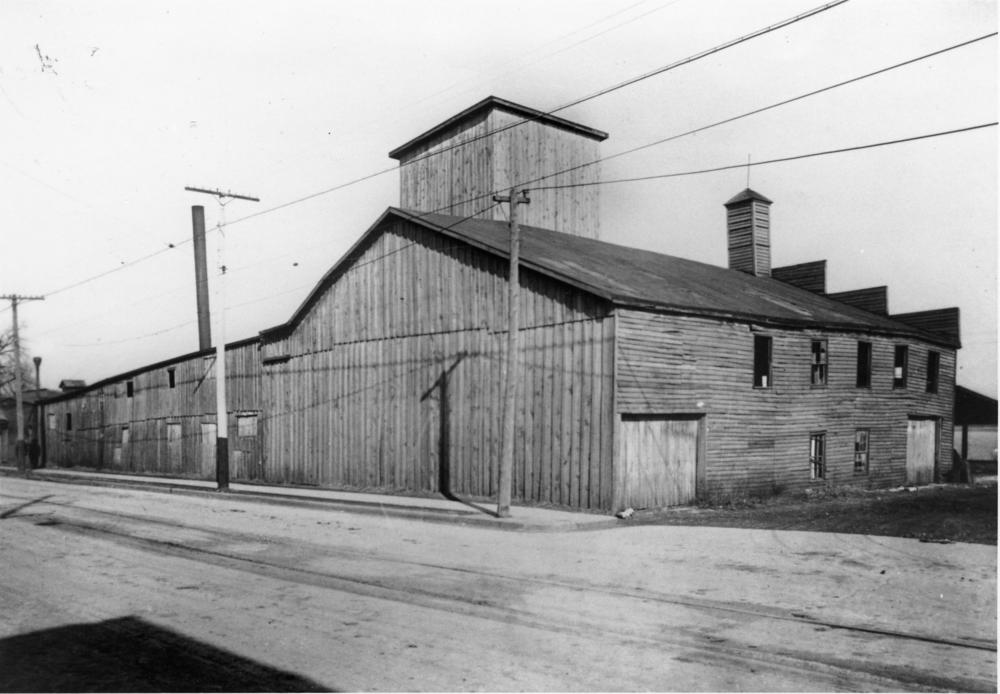 Matteson came here from Chicago with his wife, Elizabeth, and a son, Robert. A write-up about the family and the business, found in "Missouri, the Center State, 1821-1915," notes that in Chicago James "operated a plant for grinding pigments for paint and continued in business there until 1880, when he established an additional plant at Cape Girardeau, which he conducted successfully to the time of his death." James Matteson, 56, died of liver cancer on April 2, 1907, never awakening from a surgical operation conducted here by a St. Louis specialist.

His obituary in The Daily Republican proclaimed he had "passed beyond from the rank of citizens of whom Cape Girardeau has been proud and of whom the city is in need." Along with his successful business, the obit noted Matteson in prior years "took an active part in the matters which concerned the city as a whole. He was a councilman for many years and served the city well as a school director. Of late years he had dropped from the public view and given his business affairs his entire attention. He was very successful and had amassed a comfortable fortune.

"His paint mill in this city is one of the largest in this part of the country. A branch of the local factory is operated in Jonesboro, Illinois, by his son, Robert..."

Days after her husband's death, Elizabeth Matteson was elected president of company. It was also decided that son Robert would move immediately to Cape Girardeau to take charge of the paint plant. The next year, Elizabeth died on May 3 in Chicago, leaving the entire running of the business to Robert.

The latter was only 5 years old when his family moved to Cape Girardeau. He was educated in the local schools and by his father. Again from "Missouri the Center State": "Following his father's demise, R.W. Matteson became general manager and later president of the company. He owns a large percentage of the stock and is carefully controlling the interests of the house. The capacity of the plant has been gradually increased, and they are now grinding a number of pigments used by the paint manufacturers, making claim to the fact that their calcium carbonate is the purest obtained in this country. This is the largest exclusive plant of this kind in the state of Missouri and the corporation owns its own building and grounds as well as the manufacturing machinery. Today the trade covers a wide territory... Mr. Matteson also owns and operates an extensive system of lime kilns located on the Cape, the business being conducted under the name of Cape Lime & Marble Co." He was associated with Sebastian Albert of Cape Girardeau in the lime business.

Ill health probably forced Robert's retirement in 1920. He died on Jan. 16, 1921, in a San Antonio, Texas, hospital of tuberculosis, having looked for a cure at several hospitals before going to Texas. He was survived by his wife, the former Maude Alexander; a daughter, Elizabeth, and a son, Robert.

The Matteson properties in Cape Girardeau, including "lots upon which the old Matteson paint mill is located (on North Main), the Matteson quarry, just north of Broadway, between Pacific and Henderson (now Houck Football Stadium), 3.57 acres of land west of Henderson Avenue and north of Fairground (now Capaha) Park, and a lot in Monticello addition," were sold at auction from the steps of Common Pleas Courthouse on Sept. 17, 1924, to George H. Hillis of Phoenix, Arizona, for $13,650. Hillis held a $37,000 deed of trust against the property, according to an article in the Missourian.