I have always found it curious that, although it wasn't demolished until 1916, I have never been able to find a photograph of the Wilson Brown mansion in Cape Girardeau.

Brown, a former Missouri auditor and lieutenant governor, had the house constructed in 1840 on property now bounded by Frederick, Middle, Good Hope and Morgan Oak streets. The only image I have seen of the mansion appears on "A Capitol View of Cape Girardeau," a drawing of the town, with drawings of individual homes and buildings surrounding the main picture.

This article, printed in The Daily Republican newspaper on Oct. 5, 1916, gives a history of the house and the man who built it.

OLD BROWN MANSION, BUILT BEFORE THE WAR, IS BEING RAZED

That old brick mansion situated in a large lot bounded by Frederick, and Middle and Good Hope and Morgan Oak streets, once the scene of chivalry and the social center for Southeast Missouri, is being razed to the ground.

The old Brown mansion, as it is known, was once famous all over Southeast Missouri. It was a two-story brick and at the time it was built was the largest house in Cape Girardeau and in Southeast Missouri. The slave-holding gentry and their families and the elite of Southeast Missouri were wont to assemble there in antebellum days and during the war time.

Dr. Wilson Brown, the builder of the house, was one of the most prominent men of his time in Southeast Missouri and was related to many of the leading families in this section. He was a leader in politics and in society, and many notable society functions of the two decades preceding the Civil War took place in the old mansion. Many men of national fame have been entertained in the house.

Dr. Brown was auditor of the state of Missouri in the late '40s and when his term of office expired was elected lieutenant governor. He was holding this position when he died at Jefferson City in 1852 (actually, 1855). He was very wealthy and owned many slaves.

The house was erected by Dr. Brown in the year 1840. Brown was a native of Maryland and settled in the big prairie near the present city of Sikeston. After living there awhile he moved to a site near the west end of the Rock Levee Road. He was one of the promoters of the Rock Levee Road. A fine monument to his memory stands in the old cemetery on the hill near where he lived at the end of the rock levee. He owned a big body of land there at that time. The state legislature appropriated money to erect this monument.

Bowman brothers bought the old house and the lot from Capt. A.B. Sloan, with the United States Army at Little Rock, and E.F. Blomeyer, who acquired the property through inheritance. In 1835 or thereabouts Dr. Brown married Miss Amanda Giboney, one of the daughters of Robert Giboney. Three daughters were born to Dr. Brown and his wife, Althea, Amanda and Mary. Althea's first husband was William Sloan, the father of Capt. A.B. Sloan. After Sloan's death, she married Dr. George W. Travis. Amanda Brown married Dr. Sam Harris. Mrs. Blomeyer was a daughter of Dr. and Mrs. Harris. The other daughter, Mary Brown, married Capt. James Nesmith, one of Cape Girardeau's early business men.

The Bloomfield Road once passed directly by the old mansion, along what is now known locally as "Shinbone" alley, it is thought. The house originally was surrounded by a plot of 10 acres. A large and lofty Paradise tree, perhaps two centuries old, stands in the yard.

J.W. Slinkard is tearing down the old landmark for Bowman Brothers and finds that all the timber in the old brick house is black walnut, poplar, yellow pine and oak. The old house had two chimneys with fireplaces on both floors. He found hidden away in a shelf of a closet, a very old container or demijohn that once contained old Spanish or French wine. Joe Robinson moved out of the house the day the work of wrecking it began after making it his home seven years.

Searching further, I located another story that mentions Brown, as well as several other prominent Masons who lived in the area. 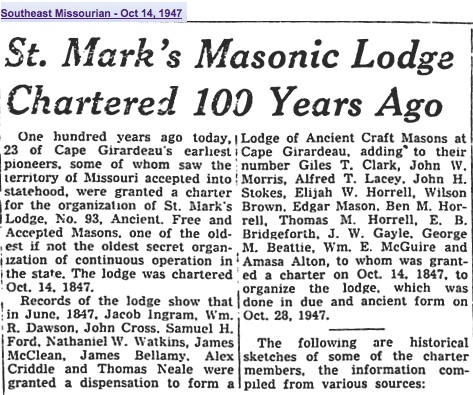 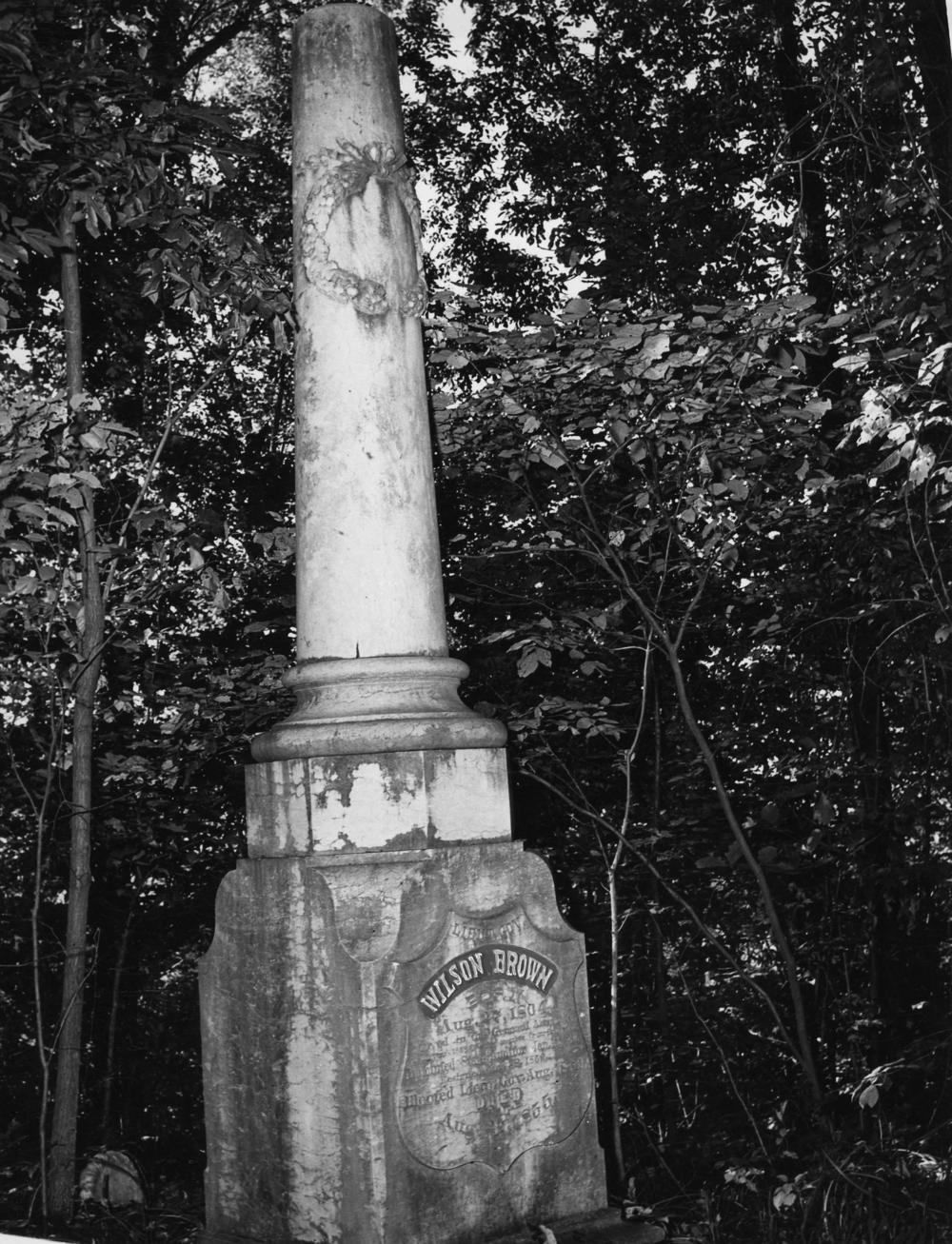 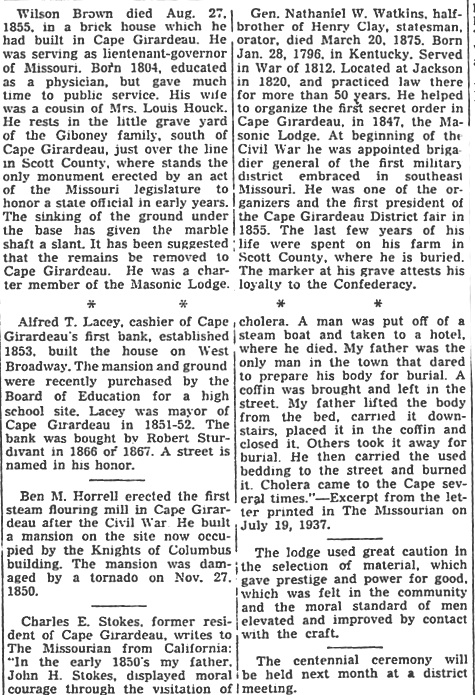 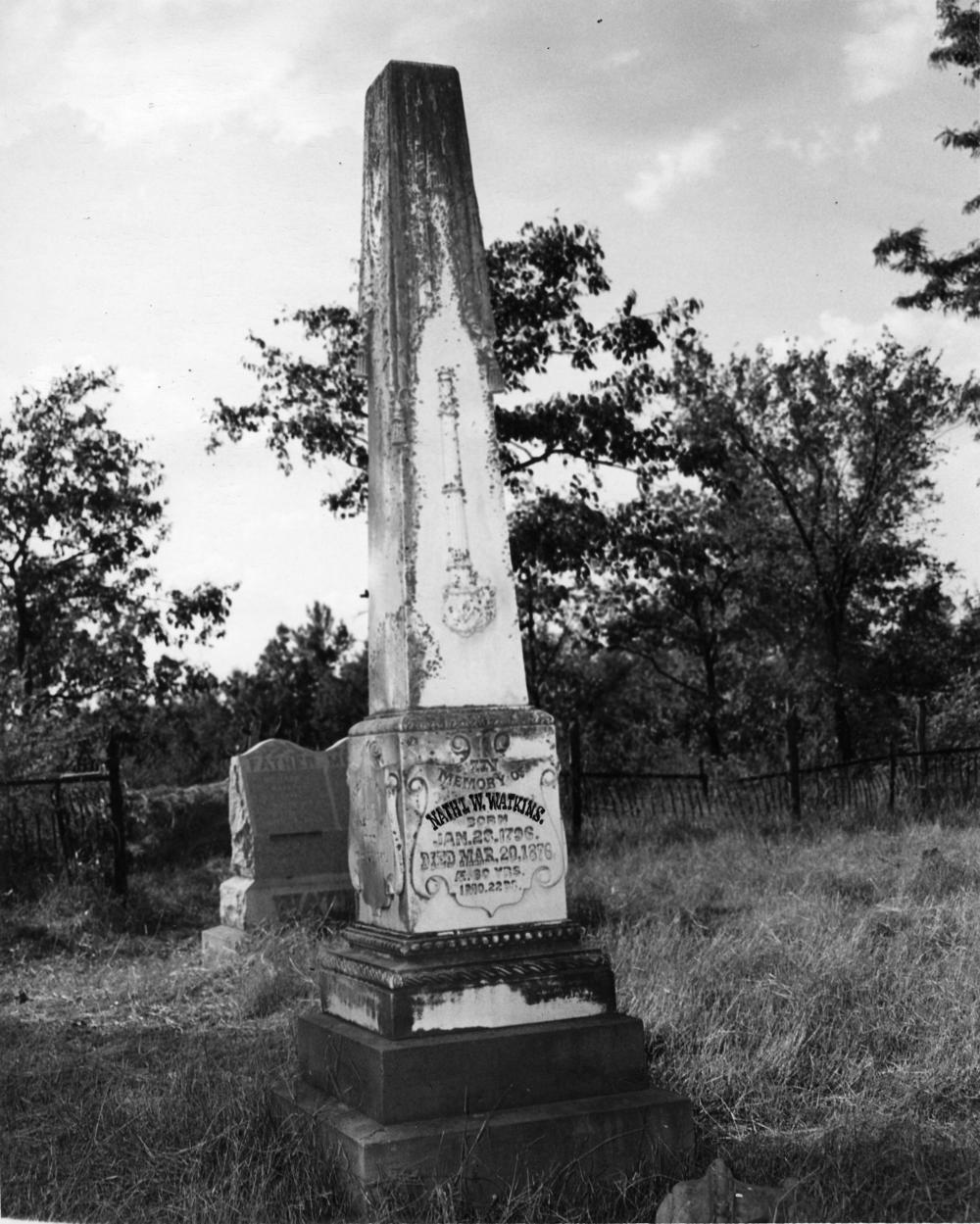 Edison Shrum, in his "History of Scott County, Missouri," gives further information about Wilson Brown and the monument that marked his grave: "Monument erected by Act of the General Assembly of Missouri in the Giboney family cemetery to mark the grave of Lt. Gov. Wilson Brown, who was born Aug. 27, 1804, and died in office Aug. 27, 1855.

"The picture (the same one as above) does not do justice to the monument, as it does not show either the base or the large flame finial that once capped the round column. This fell, or was pushed off about 1946. The monument with finial in place was about 15 feet tall, and the base is about four feet square.

"Teams of eight oxen were required to haul the heavy stone segments of the monument from the landing at Commerce to the hill top where it now stands.

"Travelers who viewed the monument in 1857, when its polished marble surface was fresh and new, were highly impressed by its size and beauty. Unfortunately, in recent years it has been defaced by vandals, and some attempt has apparently been made to dig into the grave."

In about 1989, fearing Brown's monument would suffer even more vandalism in its isolated location, some historic-minded people in Scott County decided it would be a good idea to move it. It now stands, white and gleaming, at the Scott City Park.