September in Cape Girardeau can mean only one thing: The SEMO District Fair.

In 1941, Girardeans enjoyed what they called the second year of the "renewed" district fair. An institution since 1855, the fair had its financial ups and downs. But in 1929 the exposition came to a screeching halt. After the fair closed its usual run on Sept. 21, 1929, the city -- which had owned the fairgrounds since 1916 -- sold off its various fair buildings: the hog house, the barns, the judge's stand, etc. All the fair structures were razed in the months that followed, except the grandstand. After all, baseball and the Capahas HAD to continue, even if the fair didn't.

Absent the fall classic, Cape Girardeau must have felt empty and forlorn each successive September.

But then, in the mid-1930s, brave men and women began to dream of resurrecting the event. Not at the old fairgrounds, which by then had become a park (now called Capaha). No, they dared to dream bigger than that. Voters backed a $55,000 bond issue in 1937 to buy land for a new fairgrounds outside the city limits on U.S. 61. The land would become Arena Park. Along with the land, the city partnered with the WPA to build the A.C. Brase Arena.

The following year, the expectations were that the attendance would be even higher. But the hot, dry weather worked against the fair. And perhaps the numbers were further depressed by the absence of many of the area's young men, who were taking part in military training, and the talk of war that overshadowed everything. That worldwide conflict would shut down the SEMO District Fair in 1942 and 1943.

Still, Missourian photographer G.D. Fronabarger outdid himself in 1941, taking numerous pictures that were published each day of the event. I recently discovered several of those pictures, which had previously been unidentified. Unlike those that the Missourian published the year before, the 1941 images -- at least the ones that survived -- seem more personal. Here they are, along with the wrap-up coverage from 1941. 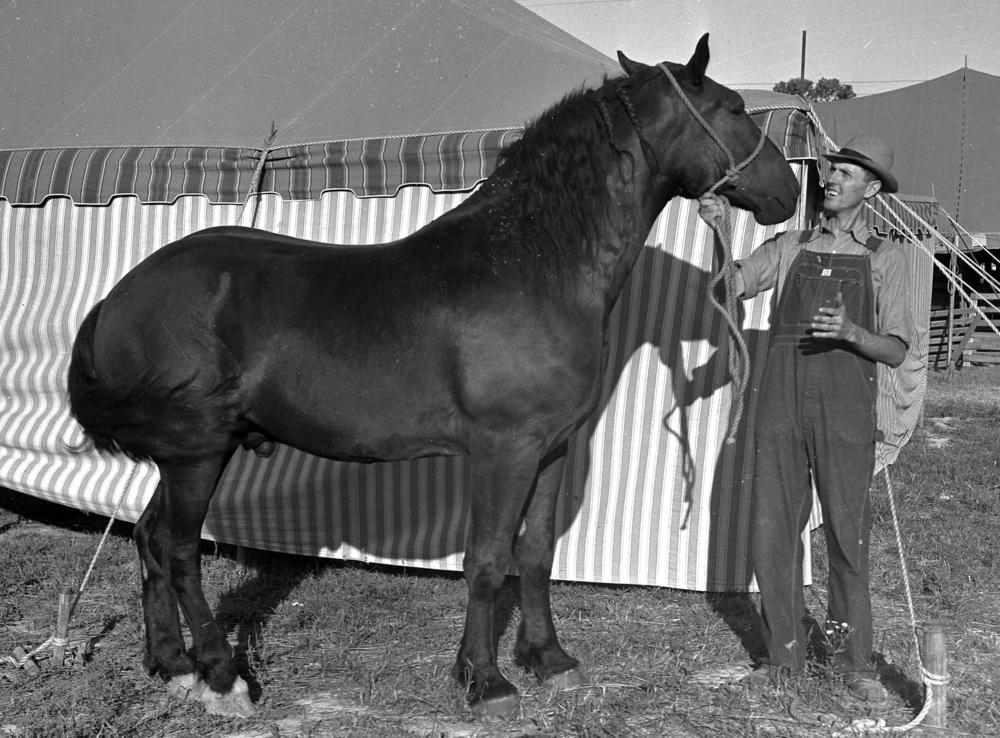 Although he's only 2 years old, this Percheron stallion, shown with his owner, Harley Allmon of near Whitewater, is developing into quite a show horse. He's one of the many fine horses shown at the District Fair and in a couple of more years Allmon probably will have to use a stepladder to reach his main. (Published Sept. 17, 1941; Southeast Missourian archive)

Decrease of 4,212 in Admissions Noted as Exposition Ends.

The Southeast Missouri District Fair was closed today after a rainless six-day session which netted 34,402 paid admissions, 14,431 of which went into the new city par Saturday for the exposition's feature day. The fair closed, literally in a cloud of dust. Hot weather prevailed during the day all during the week, the nights were cool, and not a drop of rain fell on the grounds while the exposition was in progress. The crowds churned up dust which rose, during heavy traffic, in clouds.

The District Fair is again entered on the profit side of the ledger, Manager H.V. Beal said, explaining that while all receipts and expenses have not been definitely checked, the indications ar it will again show some profit, enabling the fair association to plan for an even greater exposition in 1942. 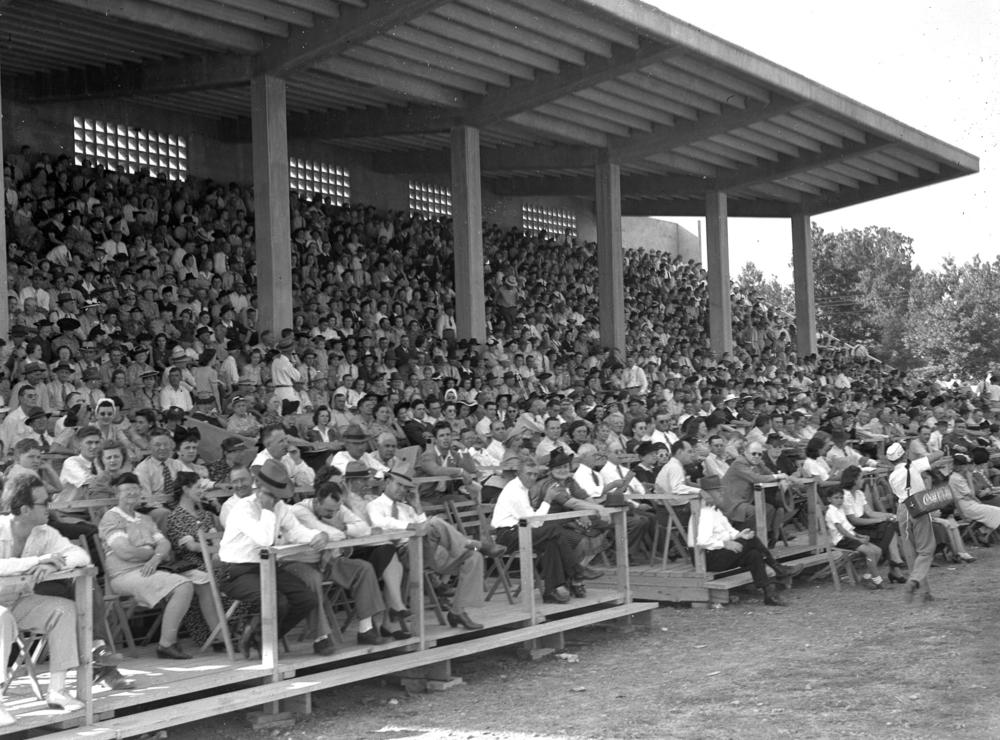 Here is a general view of the Arena Building grandstand when the big crowd packed it Thursday afternoon to witness the Cape Girardeau Day program at the District Fair. Virtually every available seat was taken and hundreds leaned over the track fence for a quarter of a mile around the oval. The photo was made during the afternoon horse racing program and shows that additional box seats accommodations this year in front of the grandstand were appreciated by the public. A complete view of the races was possible. (Published Sept. 19, 1941; Southeast Missourian archive)

No definite account of expense of the fair has been determined, but it has been estimated by the fair management that the cost will run close to $21,000. While gate receipts probably be slightly under that of last year, despite the fact that weather conditions this year were ideal, the receipts from the sale of the grandstand, box and bleacher seats was far ahead of the 1940 fair. Other revenues, including that from the carnival, will also be ahead of last year. One fair board member said a revenue of around $1,200 is expected from the carnival.

The Sunday program drew but 2,373 paid admissions to the grounds, as compared to about 4,400 last year, while the Saturday crowd of paid admissions was about 3,000 less than the record 1940 Saturday throng. Fair officials complained that special officers were unable to adequately police the park boundaries and that many people gained free access to the grounds.

Counting all persons on the grounds Saturday, including those admitted free, those who "crashed the gate," and those entering the grounds late after the admission charge was lifted, it is believed about 20,000 were at the fair during the day and night, exposition officials said.

During the next few days all financial items of the fair will be checked and a meeting of the fair board will be held within a week or two to hear a complete report from Manager Beal.

Saturday's program started with the sale of 4-H and Future Farmers of America fat beef stock, which was followed by a parade of prize winning livestock. The afternoon racing program featured four regular races and a special race between Spintell, owned by [_].J Hayes of DuQuoin, Illinois, and [_]uster Volo, owned by Guy Cleveland of Carmi, Illinois, both animals being world record trot. [_]uster Volo won the sprint. 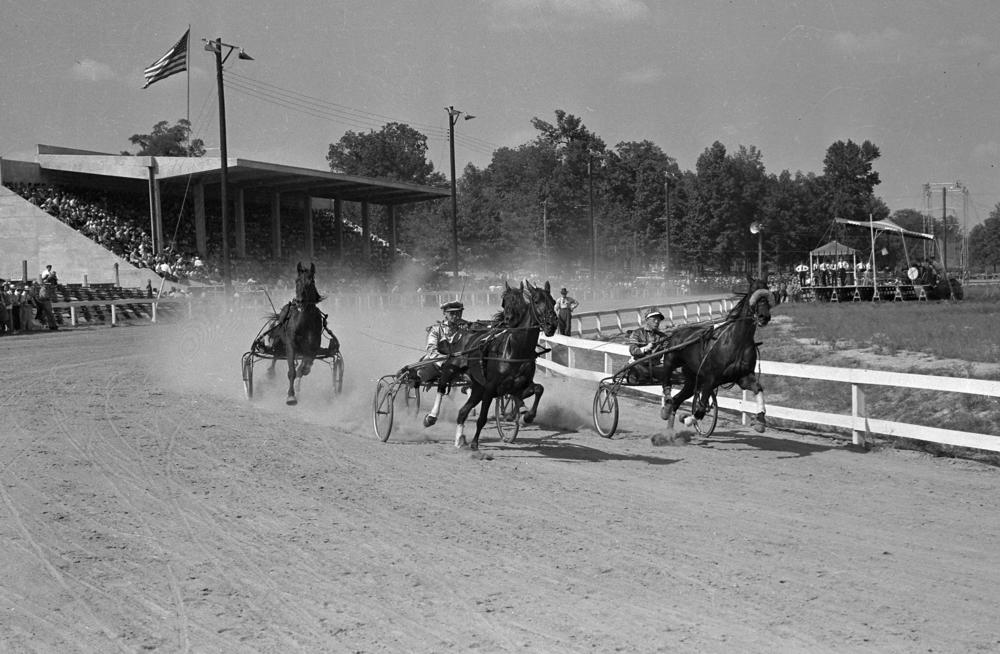 There's no greater thrill for fair patrons than a good horse race. It brings 'em to their feet. The above photo, made Thursday afternoon, shows four fast trotters rounding the south turn in their mile sprint. Almost neck and neck are You and Me, a Mt. Vernon, Illinois, horse, in the foreground, who won all three heats, and The Forge, a Boicourt, Kansas, stepper, at the rail. Charging up at the rear are Pronto Hall, from Springfield, (Missouri), and Rosa Guy, from Mt. Vernon. In the background is the grandstand and its big crowd. (Published Sept. 19, 1941; Southeast Missourian archive)

Saturday's night program featured the second of three horse shows, and the Sunday program featured the afternoon horse show, in which the county and five-gaited champions were determined. Mrs. Thelma Reiker of Cape Girardeau won the county class for the second successive year with McDonald's Gift, a horse which, in the last three years, has won 335 blue ribbons and 34 red ribbons. The five-gaited mare was won by Sweetheart Serenade, owned by Claude Lee Jr. of Anna, Illinois, these being the [___}ture classes. 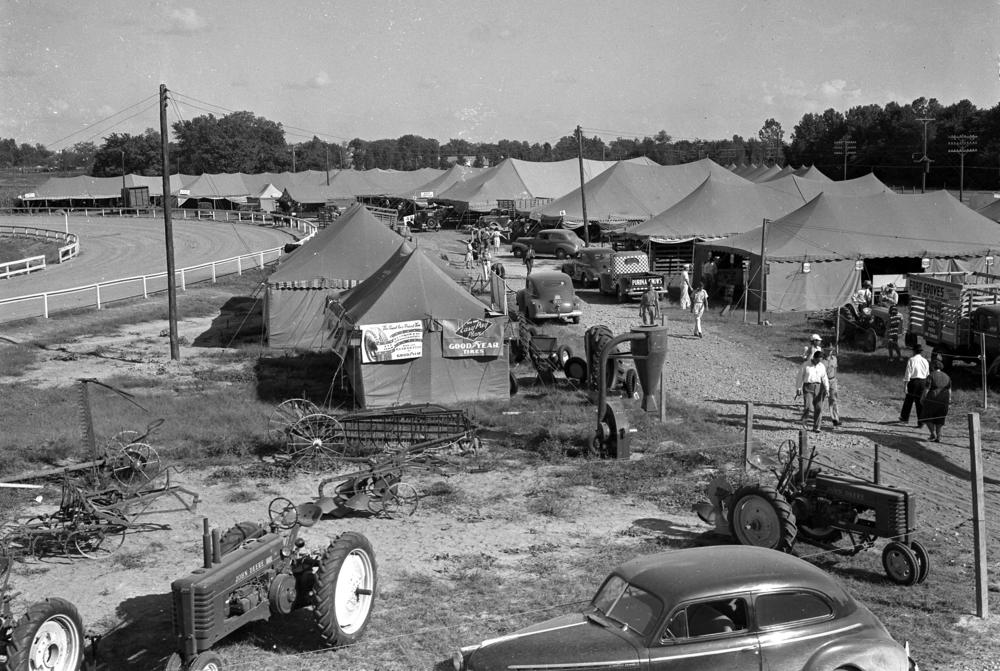 The tent city in the southeast corner of the new city park is completely filled with more than 600 head of the finest livestock in Southeast Missouri. All available space in that section of the park has been taken and, if the exposition continues to grow, additional space is going to be needed. The south run of the half-mile race track is seen at the left. A portion of a farm machinery exhibit is in the foreground. (Published Sept. 17, 1941; Southeast Missourian archive)

Concessions Operated at Profit; Premiums Paid to Over 700.

The Southeast Missouri District Fair, which closed Sunday, has been marked up as a financial success, Manager H.V. Beal said today. Although not all receipts have been checked and not all expenses were met, the exposition will show a profit, he said, explaining that a complete report will be made as soon as all items can be listed and a meeting of the fair board called.

It was not definitely known today what are the total receipts and disbursements, but the fair office is working this out, checking item by item. Manager Beal said that the total amount being paid out for premiums and on the horse races is $8,549.50, of which $1,937 was paid to race horse owners for the three racing programs. All livestock premiums were paid before the exhibitors left the grounds and checks are now being mailed out to winners in the floral hall departments. Premium payments are going to more than 700 exhibitors in all departments, Manager Beal said. 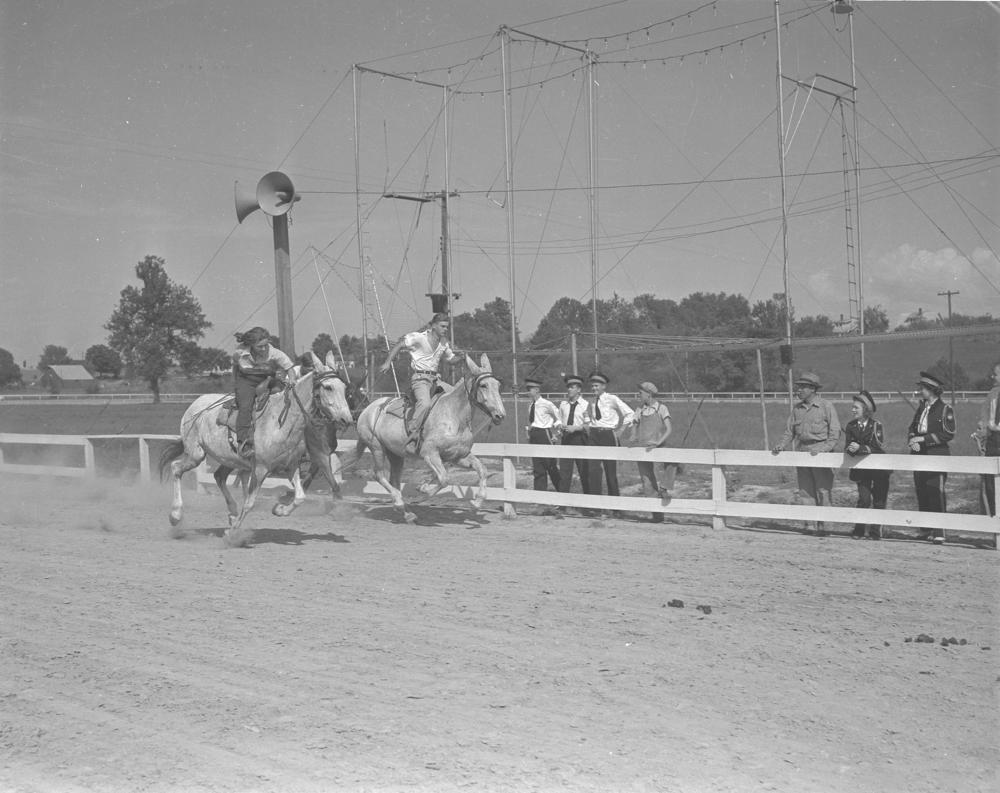 Was this a race! Bearing, neck and neck, down the stretch to the finish line over the half-mile course, this white mule race highlighted the county racing program Wednesday afternoon during kids' day at the District Fair. The two mules are ahead of a brown third mule, virtually obscured in he picture. At the left, Miss Luella Wilkening of Oak Ridge pushed "Fritzie" across the mark to nose out Bud Job of Cape Girardeau. (Published Sept. 18, 1941; Southeast Missourian archive)

Grandstand seats brought in $1,981, bleacher seats $307.90, and box seats, which have not been finally checked as yet, will bring in more than $1,200. The amount of money received this year from concessions on the grounds, aside from the carnival, will be considerably less than last year as the number of concessions was greatly reduced.

This, however, worked out to the complete satisfaction of the concession operators. Manager Beal said not a single complaint was made to him about financial loss on a concession. In fact, he said, every concession made a profit and the eating and refreshment stands sold out time after time and then found it difficult to keep enough on hand to serve the thirsty and hungry crowd.

So well pleased were most of the concession owners that five have already rented their space for the 1942 fair and paid for it, and several others have asked that their space be reserved. The dining room in the Arena Building operated by the women of St. Mary's Church, did a big business. It was well filled most of the time and on several occasions food ran low and the supply had to be replenished hurriedly.

Drivers of soda water trucks reported they could hardly keep refreshments on the grounds with several trucks running all the time. Scores of men and women could not keep up with the crowd frying hamburgers and hot dogs, in addition to the thousands of sandwiches of other types and the meals sold.

Cleaning up after the fair is quite a task. On Monday 21 men were employed by Manager Beal and 16 were being used today to clear the park of all rubbish and equipment. Concession operators have removed all their equipment and commercial booths in the Arena Building have been dismantled. Stock tents and other exhibits have been taken down. Stock pens, box seats and gates are being stored for next year's exposition. The cleanup job will probably be completed by Wednesday. 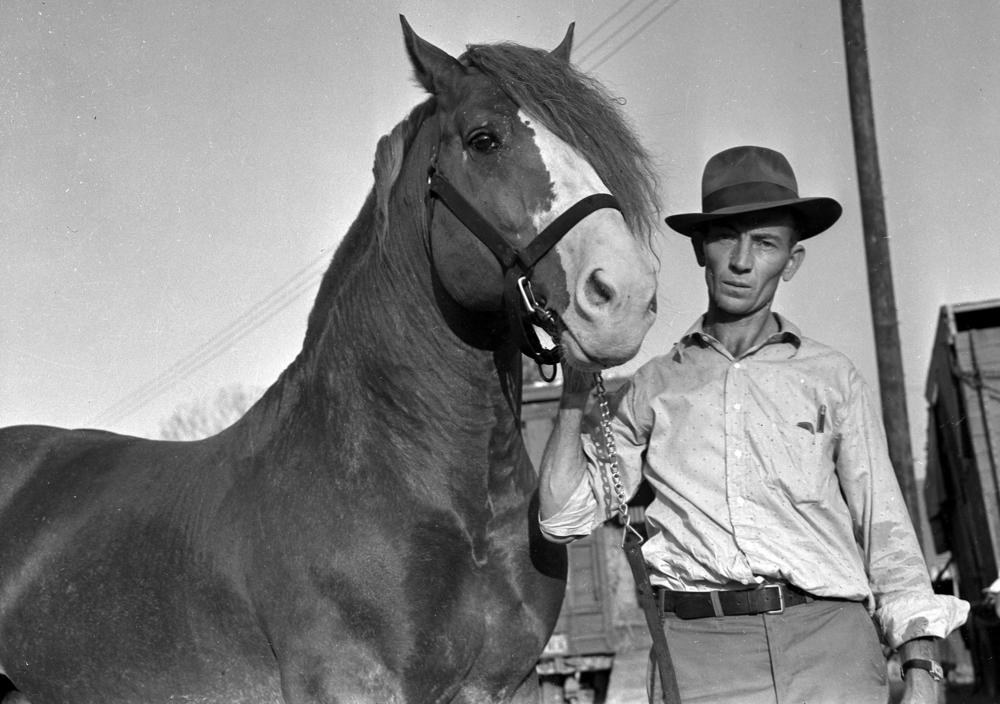 This big Belgian stallion has reason to hold his head high. The 1,800-pound animal, shown with his owner, Harry Hitt, who resides on Highway 74, south of Cape Girardeau, is one of the many fine big steeds in Cape County. One look his way and the District Fair horse judge handed over the blue ribbon. (Published Sept. 20, 1941; Southeast Missourian archive)